Because you’re marrying the family, not just the person. 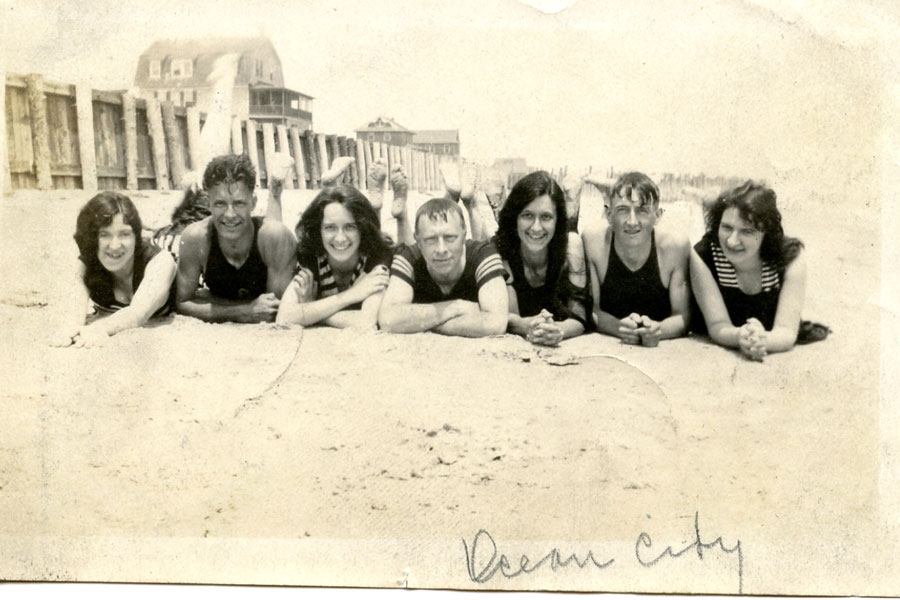 Third from left, my great grandmother Ethel; second from right, my great grandfather Edward. This photo was taken between 1915 and 1920. Photograph courtesy Pam Coblentz

There’s a rule in my family, and it goes like this: You can’t marry into this family until you’ve spent a week down the Shore with us.

And by “us” I don’t just mean my immediate family — I mean joining my entire dad’s side of the family, which for years held family reunions at a beach house in Ocean City, New Jersey for one whole week every other summer. (Of course, there have been exceptions to the rule. But is a rule really a rule if there aren’t exceptions to it?)

To be honest, I never thought much about this particular, very specific family tradition until I was throwing around Shore Week ideas with Philadelphia’s wedding editor. A conversation turned into an assignment, which turned into a mission: figure out how and why my family started this weird wedding prerequisite.

When I first reached out to my dad’s family, the Ryan family — he’s one of four siblings, who all have their own kids (and in most cases, grandkids) — I had no idea just how deep our history of falling in love at the Shore goes. I knew my dad and his siblings all spent years of their childhood living in Ocean City before relocating to Narberth for high school and that’s why the family-friendly beach town always hosted our bi-annual reunions.

What I didn’t know was that my great-grandparents actually met in Ocean City. According to my aunt, Edward Leeds was serving in the U.S. Coast Guard when he was assigned to a station in Ocean City, where Ethel Holloway was vacationing with her family. They met, fell in love — and the rest is history.

But as for the real start of the tradition, it all began in 2005, when my cousin-in-law, Scott, was a week away from marrying my cousin Becky. The whole family had come to Ocean City for a week of vacation leading up to the big day. Becky’s job in North Carolina had already started, so while she wrapped up work before getting hitched, Scott was stuck hanging out with a family he hardly knew.

While that meant sleeping on the couch in my great Cousin Jean’s house and entertaining a bunch of kids all week, Scott remembers the time fondly. I, who was 13 at the time, recall him taking my siblings and cousins out for Wawa slushies, enthusiastically joining in whatever inane pool games we invented, and playing rounds of Balderdash with the exact mix of competitiveness and fun required in a family game night. By the end of the week, Scott had become Cousin Scott, and the only thing that seemed off about him was the fact that he hadn’t been joining us for Shore reunions for years.

“Now what’s good about being the first to go in the making of a tradition is that there are so few expectations that no one can really hold anything against you (unless, of course, you drink the last of the Birch Beer),” says Scott.

But while Scott’s initiation was somewhat informal, the rules of the “Ryan Pre-Wed Test (RPWT),” as my Uncle Ron calls it, have gotten substantially more established since.

“We Boomers realized something good had happened, as [Scott] fit nicely into the family,” says Ron. “As the years passed, and the kids of us Boomers began to indicate that they may have found their potential life partners, the following began to be the norm: ‘So you are getting serious in your relationship? Then it is time to bring them to OC for the RPWT.’”

Not only did the RPWT allow the younger generation to get to know their new peers, but it also allowed my dad and his siblings the chance to make sure that this new romantic partner was Ryan Family Material. Because whether you’re marrying into the Ryan family or any other family, the fact always remains: When you get married, you’re marrying the family, not just the person.

The first test was making sure they respected our family history. Did they think Ocean City was cheesy and lame? Probably not Ryan material.

“The Baby Boomer generation of the Ryan family all call OCNJ home,” says Ron. “If you want to be a part of the Ryan family, you better demonstrate a respect for our home town and not be bored as we point out where our home on the bay used to be, where we lived on Asbury Avenue … The list goes on and on because the roots are deep and memories cherished.”

The second test was game night. Rounds of cards and board games always went late into the night, usually accompanied by plenty of Birch Beer, Twizzlers, and M&Ms. If the hopeful date couldn’t handle us all at our loudest, most competitive, and ridiculous, they didn’t deserve us at our best.

The third test, which goes hand-in-hand with the second, was simply the tight living conditions at the Shore, where (until the family expanded beyond the possibility of cramming in), we all slept under one roof at great Cousin Jean’s. For the aspiring date, no privacy was guaranteed, nor was a bedroom. Actually, not even a bed in most cases — a couch or the floor were often the only options available. 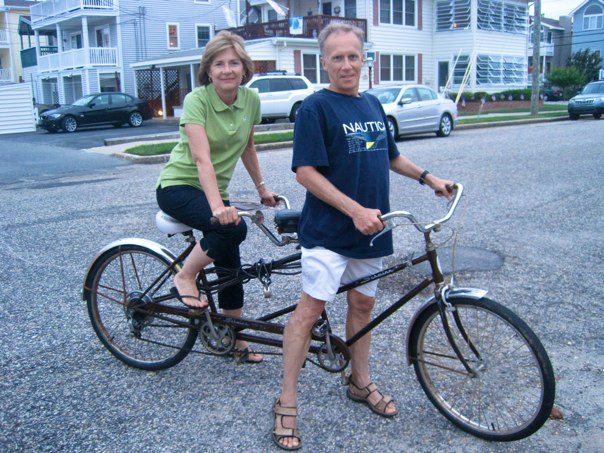 My parents on the tandem bike. Forty-plus years of marriage later, they still pass the test.

The fourth test — which I’ll admit has been inconsistently applied over the years — was the tandem bike test. Could you make down the alleyways to the boardwalk on Cousin Jean’s ancient, rusty two-seater without crashing or wanting to kill each other? Your relationship is probably pretty strong.

In 2011, it was my turn to bring my boyfriend to the Shore. This time, a new generation of little cousins had cropped up for him to entertain — Becky and Scott’s kids — and he spent the week with them clambering over his shoulders. In one photo from that summer, he can be seen hauling four chairs, a boogie board, and a cart full of towels down to the beach — a move I’m sure earned him some goodwill. We even took out the tandem bike for a spin, and while I do remember some terrified screams, we never crashed.

Needless to say, he passed. As of last week, we’ve been married six years.

My youngest cousin on my dad’s side got married last fall, and at this point, we’ve officially run out of people in the family to marry. But no small part of me hopes that the next generation will continue on with the tradition. Because while it may be strange and probably more than a little uncomfortable for our poor dates to spend a week with a bunch of strangers, this tradition has made it so no matter how big our family expands, we remain close — and if you want to join, well, you’d better get used to it.