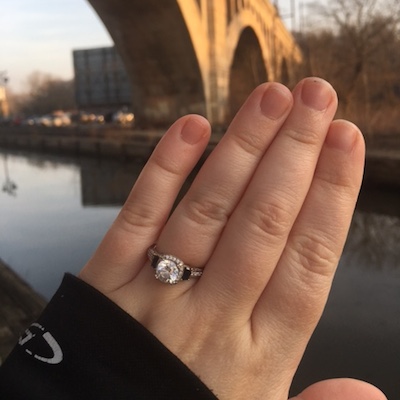 The couple: Caitlin Harvey and Steven Sztenderowicz, from Manayunk.

The ring: My ring is white gold with a round-cut center diamond with a halo of diamonds set around it. There is a sapphire set on each side of the diamond.

We had talked about getting engaged for a while, so I told him that I only had two requests of the ring: it had to have color and the diamonds had to be sustainably sourced. Steven designed my ring with the help of my best friend and the ring was made by Kranich’s Jewelers in State College.

The proposal: I attended Be Well Philly bootcamp this past summer with friends. {Ed note: Nice! Here are all the details on the next one.} When I was finished, Steven was supposed to meet me there so I could take him home (He was in the CC for a Philly Beer Week event). I texted him when I was done, and then walked around the Drexel Athletic Center to find him standing there with a box of doughnuts from Federal Donuts! The box had an envelope attached. He told me to open it and said that he couldn’t stay. (This was a week before our five year dating anniversary, and Steven has sent me on scavenger hunts before for our anniversary or Valentine’s Day—so, I didn’t realize that this was it!)

The note sent me to where we had our first date, Tria. When I arrived, I found my best friend there holding another envelope! In the envelope was a jigsaw puzzle to put together. On the jigsaw puzzle was a clue for the next location. From then on, each location I was sent to had a friend or relative with a jigsaw puzzle! I went to eight locations in total, and each location was special to us (even the starting location, Drexel, which is where we met!). Luckily, the second-to-last stop sent me home, where I could finally clean up from my sweat session that morning! I met Steven (finally!) at the last stop on the Manayunk Bridge, where he proposed in front of all our friends and family that I saw throughout the day!

The band: I am still debating on a wedding band and go back and forth between one that matches the band on my engagement ring or a mismatched shape, like with ovals. I definitely want to have some sparkle on it. I probably will keep just with diamonds, so that the sapphires on the engagement ring can still pop.