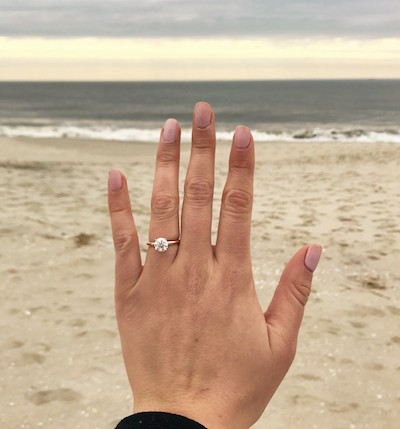 The couple: Kelly Ferguson and Mike McCarry, from Fort Washington.

The ring: My ring has a round solitaire diamond on a rose gold band, with a Tiffany setting. Mike picked the ring out along with his mom at Barsky Diamonds on Jewelers’ Row, which is the same place that his grandfather purchased his grandmother’s ring, and his father purchased his mother’s ring. While at the jeweler, his grandparent’s wedding song came on the radio. We like to think that this means that his grandfather, who passed away a few years ago, approves!

A few months ago Mike had asked me to show him a picture of my ideal ring so he could get some ideas. (Thanks, Pinterest!) To say he delivered is an understatement!

The proposal: I knew that a proposal might be in my future based on discussions Mike and I have had surrounding our future plans, but I did not expect it to happen any time soon.

One of our favorite places to visit is Cape May. Mike’s family has a house there, so we are lucky enough to spend many of our weekends in the off-season at the beach. Cape May is the place where Mike first told me he loved me, where we’ve spent multiple birthdays and holidays, and is where we rang in 2016. Suffice it to say, it’s our special place.

One of our favorite rituals while we’re there is to spend our mornings walking on the beach while drinking our morning coffee. Since this past Sunday was an unseasonably warm day, we headed towards the Cape May Lighthouse for our usual three-mile walk. Part of the walk takes us through an amazing nature reserve that is beautiful in the winter and ends right on the beach.

Just as we reached the sand towards the end of the walk, I said, “Every time I come to the beach it doesn’t feel real until my feet hit the sand.” This prompted a discussion about how lucky we are to be able to spend our days with each other looking out at the ocean and just enjoying these special moments of tranquility. As we were standing with our arms wrapped around each other, observing the incredible view, he pushed me away slightly, reached into his pocket, and got down on one knee. What’s funny to me is that I always thought I would burst into tears in this moment, but instead I burst into uncontrollable giggles. I was shaking from excitement so badly that I was afraid to take the ring because I was worried I would drop it in the sand. When he asked me if I was ever going to put the ring on, I grabbed it and fell into him for the happiest, biggest hug. It was absolutely the happiest day of my life.

While his story differs a bit from mine, the pure happiness in that moment was exactly the same for both of us. I never thought I would say that February 19th would become my favorite day of the year.

The band: Since my engagement ring band is rose gold, I would love to consider another rose-gold or white-gold band. My ring itself is very simple, so I would like to keep the wedding band simple as well. I would consider just a plain band or one with just a few small diamonds on it. Nothing flashy, but very classy.