Plus, robots take over driving duties at the Navy Yard. And South Philadelphia has another 40-day chicken man. 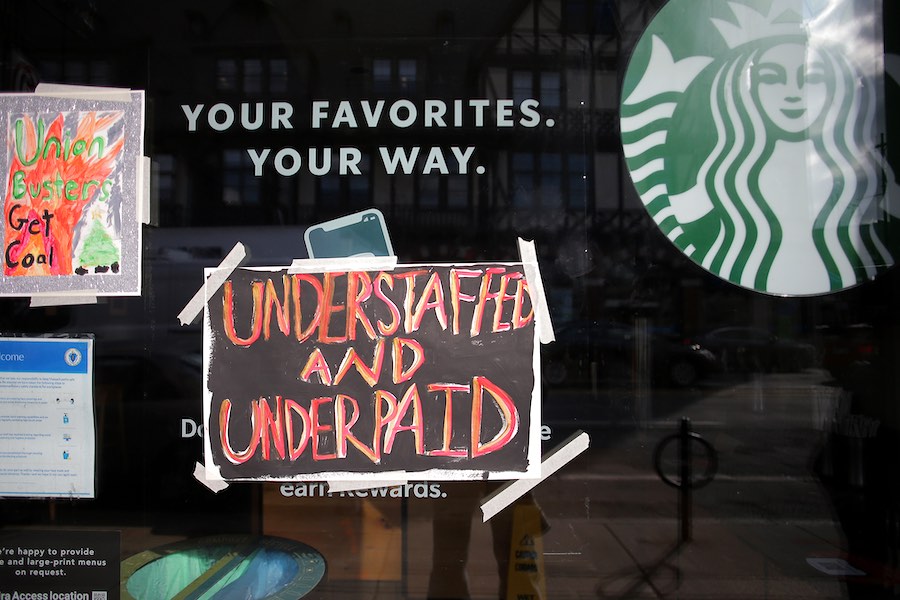 A sign from a previous Starbucks strike (Getty Images)

Thanks to all of you loyal Philly Today readers for being a part of the conversation and sending in lots of tips. This edition of Philly Today will be the last of 2022. (Hey, even I need a break once in a while.) But I’ll see you in 2023. Enjoy the holiday season. —Victor

If you need a triple caramel latte today and you support workers’ rights, you might want to go somewhere other than Starbucks. (It’s not as if there aren’t plenty of locally owned Philadelphia coffeeshops you can support.) Workers at many Starbucks locations around the country are going on strike on Friday, one month after another big Starbucks strike.

In Philadelphia, the striking Starbucks locations are located at 34th and Walnut streets and 3400 Civic Center Boulevard in University City, and 20th and Market streets in Center City.

A spokesperson for the striking Starbucks workers had this to say in a statement:

Workers made history when over 110 Starbucks stores and 1,000 baristas walked out on strike on November 17, 2022, in what was dubbed ‘Red Cup Rebellion.’

Yet, instead of listening to workers, Starbucks decided to escalate their anti-union campaign by closing the Broadway & Denny location, the first store to organize in Seattle, on the one-year anniversary of the first Starbucks union election win. Starbucks doubled down on their union-busting, so workers are going to double down their fight for a contract.

Despite winning 270 union elections with over 7,000 union workers, Starbucks continues to wage an aggressive union-busting campaign against workers, which includes firing over 150 union leaders across the country, permanently closing union stores, and bullying & threatening union leaders. The National Labor Relations Board (NLRB) has already issued over 45 Complaints against Starbucks encompassing over 900 violations of federal labor law.

Workers are asking supporters to stand in solidarity with their efforts by not purchasing Starbucks gift cards until workers win the contract they deserve.

A spokesperson for Starbucks did not immediately respond to a request for comment.

The End Is Nigh (for the Rain, I Mean)

It has been downright miserable in Philadelphia over the last 24 hours. But I have good news. Things are beginning to dry out. And this weekend should be clear, though cold. (Highs don’t get out of the 30s.) So get out and do something. What’s there to do? Here are 91 great ideas.

Good News for Supporters of Reproductive Rights in Philadelphia

Hell, I Haven’t Read One Book In 20 Weeks This Year

And I’m not proud of that! Meanwhile, the Philadelphia School District is trying to get kids to read 20 books in 20 weeks. Go, kids!

But Bob Dix isn’t eating 40 chickens, like this guy did. He’s drawing them.

The Story Behind the Story

The Inquirer with the fascinating background on how police were eventually able to ID the Boy in the Box.

And from the Ho-Hum Sports Desk …

Last year’s NBA champs, the Golden State Warriors, visit the Sixers tonight at 7:30. The Sixers actually have a better record (15-12) than the Warriors (14-15) do so far. I’m looking forward to this one. What, no NBA Finals MVP?

Stephen Curry is likely to miss Friday’s game against the 76ers with a shoulder injury.

The Warriors superstar is expected to be out for “a few weeks.” https://t.co/MA3pu2EFDd

Joel Embiid thinks #Sixers fans want him to be tradedhttps://t.co/a4NKEtmXtb

Joel, you’re wrong. We do not.

Speaking of records, the 12-1 Eagles visit the Windy City to take on the 3-10 Chicago Bears on Sunday at one o’clock. And that nickname ain’t kidding.

Current forecast for #Eagles vs. Bears on Sunday in Chicago:

Going to feel like 15 degrees with winds around 20+ MPH

Hope you got up bright and early this morning and snagged your copy of the latest vinyl pressing of A Philly Special Christmas!

In college hoops this weekend: On Saturday, Delaware State travels to Drexel at two, which is also when La Salle tips off against Cincinnati. St. Joe’s hosts Villanova at four. Temple plays Mississippi away at 5 p.m.

All Philly Today Sports Desk coverage is provided by Sandy “The Skimm of Philly Sports” Hingston.