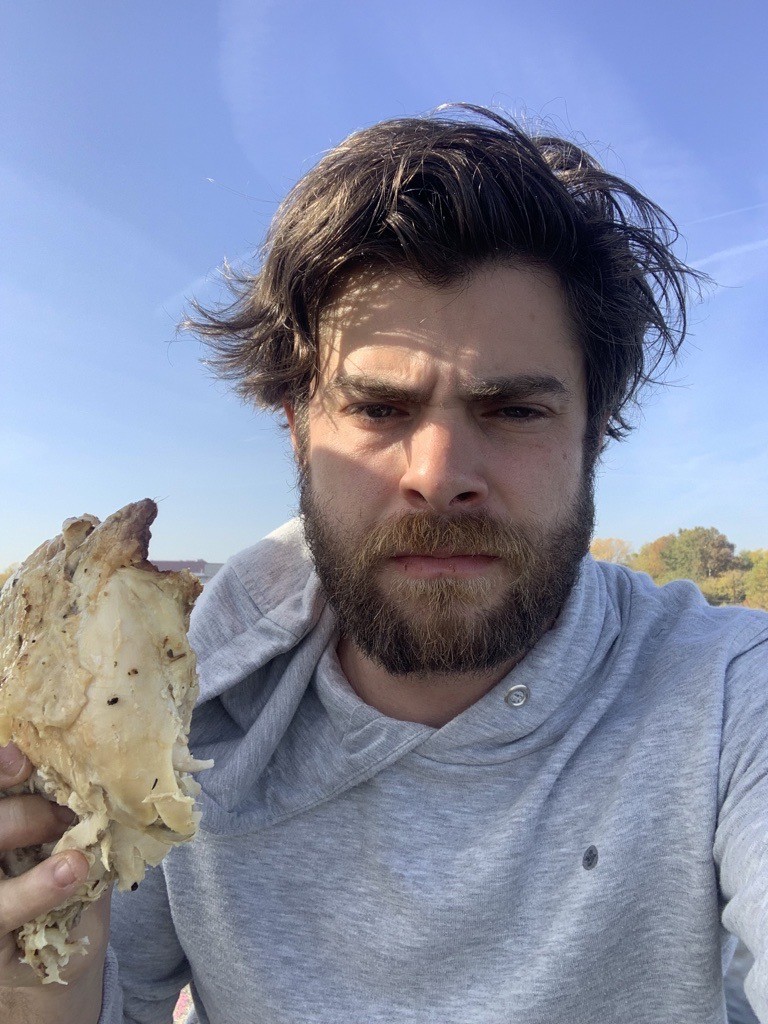 By now you’ve likely heard that Philadelphia resident and Barclay Prime server Alexander Tominsky successfully ingested 40 rotisserie chickens in 40 days. Along the way, he documented his journey with daily selfies on Twitter and posted signs inviting the masses to witness what would be his final chicken nosh session at the abandoned pier by Walmart. Part proxy athletic event, part religious ritual, part inexplicable internet fodder, his chicken-eating has captured the attention of our city. Here’s what Alexander had to say on Monday evening.

When, if ever, do you think you’ll eat chicken again?
I can’t imagine it anytime on the horizon. The entire experience of even looking at a chicken is unsettling.

Where did you get your rotisserie chickens?
I went to a handful of different places. Di Bruno’s, Giant. Walmart was the last one. ACME. ShopRite. But the one that I would go to the most is Rittenhouse Market. Their chickens are pretty good. They’re pretty bland, which is my preference. I like it to be as torturing as possible. Everyone at Rittenhouse Market was just so nice. It was nice to go somewhere and everyone’s giving you the thumbs up and supporting you.

So the people at Rittenhouse Market knew about your chicken commitment?
A few of them did, yeah. I think a few of them thought I was just the weird guy who got the chicken. I knew they recognized me. At first they would always try to put a plastic bag over the chicken because it can spill. And every time I would say no. After about 15 days, they knew not to bag the chicken.

Because if they bagged the chicken, the juices would get everywhere? And you were just going to go home and eat it right away?
No, right next door to work. Just open it up and consume. I work at Barclay Prime, so right before the shift I would go in about a half-hour early and consume the fowl.

You always got a plain rotisserie chicken? Not an herb-crusted situation? No decor on your poultry?
No sauce, no decor. There was one day where, out of desperation, there was only one rotisserie chicken left. It was lemon-pepper and I’m very embarrassed to say it. But that was the only time there was any sort of flavoring on the chicken.

I’ve heard in your other interviews that you did this because “it just felt right.” I’m wondering if you can elaborate on what felt right about it?
It’s like swinging a bat and hitting a ball. I took that one bite and I felt something special. And I felt like this is a very mundane thing but something’s telling me that this needs to be done so I just followed through with it.

When did you get the idea to make this a public exhibition, something that other people were going to witness?
I have pictures of every day up to Day 11. But I kept those for myself. But I felt the power and the electric, intoxicating energy that it was giving me. I had to release it out of the coop and share it with the world. There came a point where I was like maybe I should share this. It was never the intention to share this with the public, it was more of a personal thing.

Did you do anything with all of the leftover bones? Like did you make a stock?
I made a stock a few times. I don’t know if I’m supposed to but I put a lot of them in the compost turner.

I don’t think you’re supposed to do that in cities, bones take longer to break down. I could be wrong…
Oh my God, is that where all the animals are coming from? Yeah, my dog’s been yipping and yapping because all of the animals have found refuge. Thank you for letting me know, I’m going to have to clear this out. We have a big garden, we use a compost service, but we also have a compost turner.

Did your stomach hurt? And does it hurt right now?
Yeah, my stomach still hurts. My body is in the process of repairing and I don’t think it’ll be back to normal in quite a while. It’s awful, I get terrible cramps. My stomach is bloated and throbs. Sometimes I don’t notice it if I’m like walking around, but as soon as I’m still or sitting down, it throbs to the beat of my heart. I think it’s from the sodium.

Yeah, I do too. Do you think you’ll tell your doctor about this?
You know what, I kind of wanted to be like “ignorance is bliss.” But I’m probably going to get some blood work this week. I had been fairly healthy, you know, drinking water, exercising frequently. But this has taken a toll.

But are you okay, like in an existential way?
Oh yes, 100 percent. I feel great. 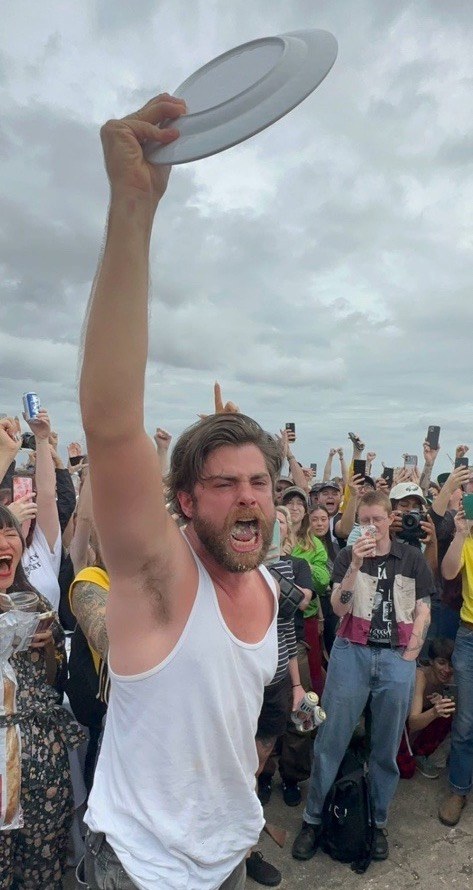 What was your first non-chicken meal?
I haven’t had one yet. No, my stomach hurts so bad. I’m actually at a place right now to get dinner in New York. My sister is a park ranger here and my mom is in Providence, so we met halfway. I thought sushi was going to be my first meal after the chicken, but it’s going to be a burger.

What does relaxing look like to you? You just seem like an intense person who enjoys pain and comedy, and I wonder how you find rest?
I don’t rest very often. But sometimes I daydream and that feels like resting.

Do you daydream about chicken?
That was the only thing I thought about up until the event. Like I was having dreams. I probably ate 300 chickens if you count the dream chickens. Yeah, it was a nightmare.

In the wake of the Union losing and the Phillies losing, there’s something about this as an athletic event. Do you consider yourself a chicken-fueled athlete?
No, not at all. I’m just a man who eats chicken.

I’ve also heard you referred to as the latest sex symbol for the chronically online, do you have any response to that?
I haven’t heard that. I haven’t really been looking online because it’s just so exhausting and it reminds me of the feast. But that’s pretty cool. I’ll tell my mom. She’ll probably be thankful to know that she made a child that people want to fornicate with.

What did you learn about yourself, and chicken, during this process?
Just to push through. There were times where I was like “This is crazy. Am I crazy?” Like there was a day I was at the ACME, like at Frosted Mug enjoying the rotisserie chicken. And then sitting next to me, not eating or drinking anything, was just a guy dressed up like Rocky talking about Rocky to himself. And then there’s another guy frantically pressing his phone while it’s charging to see if it was powered on. And I was basically like “I’m with my people right now.” So just don’t doubt yourself. And then, hopefully, I’m going to take advantage of this traction to work with some food banks and try to get some food on the table for people who can’t do that on their own.

Do you think that this could ever happen in any other city? To me, this feels like a very Philadelphian experience. Have you gotten that sense?
I doubt it. I think Philly is a special place. I’m proud to live here.

Are you planning on voting?
I’m in New York and I told them I can’t stay because that is a top priority. I have never not voted since I was legally allowed to. Everyone should go out and vote because it’s an important right.