Philly Today: It’s a Miracle. You Can Still Get the Eagles Christmas Album.

Plus: Philly Pops drama. Temple prez to move from Chestnut Hill to North Philly amid criticism. And one local school district says it may have to go virtual. 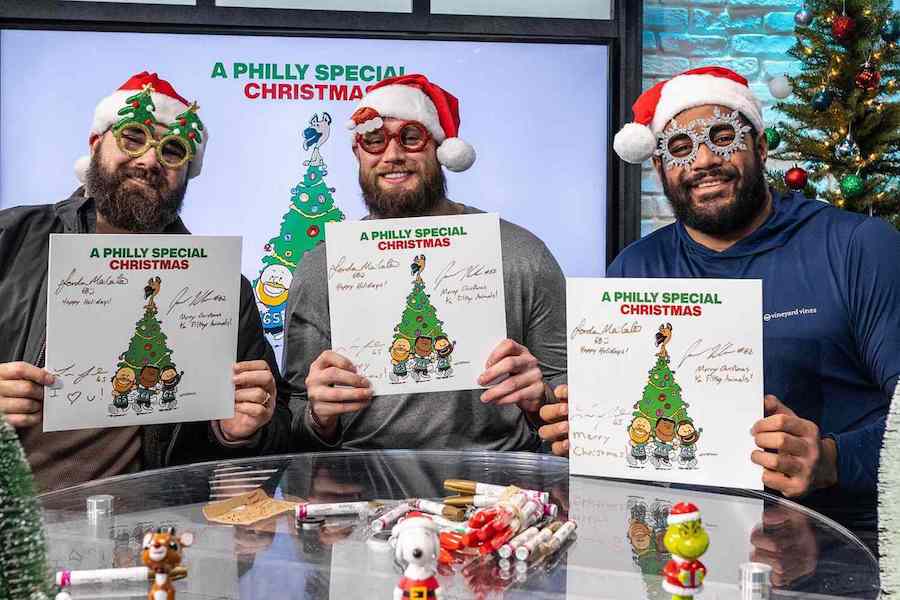 Lo and Behold: You Can Still Get the Eagles Christmas Album

If you live in Philly, there is probably someone on your shopping list who wants a copy of the Eagles Christmas album. But after the second pressing of A Philly Special Christmas sold out in two minutes last week, it seemed all hope was lost.

But in what can only be described as a true Christmas miracle, you’ll be able to order the third vinyl pressing of the Eagles Christmas album starting this Friday at 9 a.m. Or at least you’ll be able to try to order it. (To read what happened when I tried to order the second pressing, go here.) Here is the official website, where you can (again, try to) place your order.

“What started out as a fun idea with the intention of raising money for families around the holidays, turned into something much more,” Eagles center/singer Jason Kelce said in a statement. “At some point, we all realized, this is going to be really great, which exceeded any of our expectations going in. But more than that, and I know it’s cheesy, this album really came to embody friendship, joy, and giving, as if the Christmas Spirit had possessed us all.”

It’s worth noting that you won’t be able to get a copy of the Eagles Christmas album in time to stick it under the tree. They won’t even press the album before Christmas. But you will get a note you can print out and wrap or stick in a stocking. If you simply must have one before Christmas, you can pick up a copy from somebody in Blue Bell via Facebook Marketplace for $300. Ebay also has options, including signed copies.

Oh, and if you just want to stream the thing, you’ll be able to do so starting on December 23rd. No word on whether B101 will start playing these Eagles Christmas tunes instead of Mariah or that Italian Christmas donkey song for the zillionth time.

So far, the Eagles Christmas album has raised more than $100,000 for charity. More to come.

Did you hear about the New Jersey boaters who went missing during a trip from Cape May to Florida? Their family last heard from them on December 3rd. And searchers just found them — alive and basically well — off the coast of Delaware without fuel or electricity.

Speaking of Things That Are Wet

The region is under a winter weather advisory (that’s the one that’s not so bad) from 5 a.m. until noon Thursday.

From the National Weather Service:

WHEN…From 5 AM to noon EST Thursday.

IMPACTS…Plan on slippery road conditions. The hazardous conditions could impact the morning commute.

Also, I’m done with the Ack-a-me for my panic shopping ahead of a “snow event.” Too expensive. Aldi all the way.

Yesterday, I told you that some Temple University students had called out new Temple president Jason Wingard for not doing enough about campus safety. Later that same day, Temple announced that this spring Wingard is going to move his family from idyllic Chestnut Hill to a house one block from the Temple campus.

The Philly Pops Musicians Are Ready to Go on Strike

There’s been a lot of talk of late about how the Philly Pops may cease to exist at the end of the 2022-23 season. And Pops players have said they were surprised to learn this, especially while they were in the middle of negotiations with Philly Pops ownership. But there are still shows on the calendar for the rest of the season, and now Philly Pops musicians say they are ready to strike.

From a statement released on Tuesday by the local musicians’ union:

The Philly POPS musicians, members of The American Federation of Musicians, Local 77, voted yesterday to authorize a strike, if necessary, in order to resolve what they consider to be urgent disputes related to management’s lack of transparency before announcing that Philly POPS operations will cease next year. According to the Union’s official count, at least 95% of Philly POPS players voted to authorize a strike if necessary.

“We have been trying to get Philly Pops management to negotiate contract commitments since August,” said Ellen Trainer, president of the union representing the Pops musicians. It’s been more than 90 days since we gave them our most recent proposal. After decades of loyal service to the Pops, these musicians are the Philly Pops. They’re one in the same. There was no reason to illegally hide the truth from us while we were in active contract negotiations. There is no reason to stonewall these workers’ needs. There’s no reason to send them home for the holidays with no idea how their families are supposed to budget for the new year.”

“We found out the Pops wanted to dissolve the company on the same day everyone else saw it on the news,” says Brooke Beazley, a cellist for the Philly POPS for the past 35 years, who has helped lead the musicians during their contract negotiations. “This whole time we have been negotiating for our future, they never bothered to tell us they were abandoning that future. When we found out that we would need to get an agreement that protects us and our contract, they didn’t even bother to send their own negotiator to our most recent bargaining session.”

As of press time, the Pops musicians were scheduled to perform their final shows of 2022 on Wednesday, Friday and Saturday at the Kimmel Center before breaking until February. But after a bargaining session scheduled for Wednesday, who knows what will happen?

On Wednesday morning, a spokesperson for Philly Pops management sent me the following statement:

In the course of our CBA negotiation, we are actively addressing the concerns expressed by the Local’s leadership weighed against the backdrop of the economic challenges driven by the pandemic and its aftermath. Our seventh meeting is scheduled for today. We, of course, hope to achieve a resolution satisfactory to all parties.

You can read the original statement from Philly Pops ownership about the decision to cease operations here.

Speaking of Classical Music and Unions

The Quakertown school district says it may have to go virtual due to illnesses and staffing shortages.

No Presents for This Kid

Police have charged a 12-year-old boy at Charles F. Patton Middle School in normally quiet Chadds Ford with making terroristic threats to a teacher and other staff members at the school. He allegedly threatened them and said he had a gun in his bag. Turns out he didn’t have a gun in his bag. Police released the boy into the custody of his mother, who hopefully didn’t let him go home and play Nintendo Switch all night.

And From the RIP Curt Simmons Sports Desk

I only caught the first 10 minutes of last night’s Sixers game. Danuel House and De’Anthony Melton were both out with injuries, so Doc started Thybulle, Tucker, Embiid, Harris and Harden. Matisse picked up two fouls inside the first minute, which made me wonder what the record for that is. Then it was time for my volleyball night! I tuned in on the car radio as soon as we were done playing, but the game was already over. In fact, it had been over for a while …

Matisse hung in there and had a good game. So did Joel Embiid.

Embiid's scoring average is now 33.3 points, tops in the NBA.

And so did James Harden!

In the World Cup quarterfinals today, Argentina defeated Croatia, 3-0, in a game that (for once) didn’t go into overtime.

The second bout in the round is today at 2 p.m., between France and Morocco.

Curt Simmons has died — the last of the Phillies Whiz Kids. Rest in peace, local legend.