Philly Today: OK, This Photo of John and Gisele Definitely Needs to Be Explained

Plus, WHYY's new podcast about the Rocky statue. And a new reason to boo Bill Clinton. 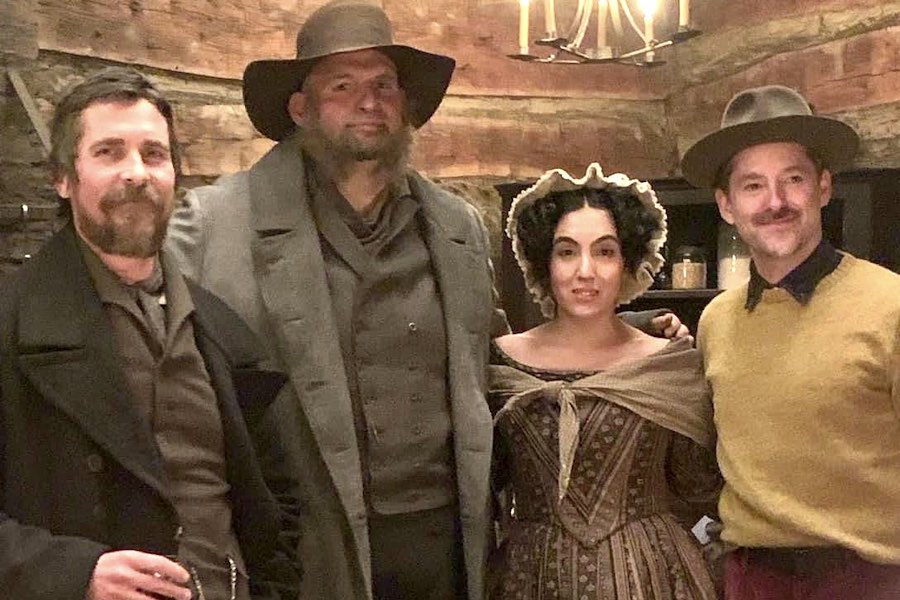 It’s not every day that you see a photo of Hollywood actor Christian Bale and movie director Scott Cooper with Senator-Elect John Fetterman and wife Gisele. And with the Fettermans clad in some kind of olden-times garb, no less. So naturally, we had to know what the hell is going on here, once we saw the photo making the rounds on Twitter.

It turns out that the Fettermans are making a small appearance in the upcoming Netflix movie, The Pale Blue Eye, which stars Christian Bale. Scott Cooper directs. The Pale Blue Eye is a 19th-century murder mystery that centers on a detective who gets some assistance from none other than Edgar Allen Poe. John Fetterman actually worked with Bale and Cooper before thanks to their 2013 crime drama Out of the Furnace, which was filmed in Braddock when Fetterman was mayor.

(Bit of a Philly-connection trivia: Main Line resident Brad Ingelsby, who gave us Mare of Easttown, wrote the screenplay for The Pale Blue Eye. You can read our interview with Ingelsby here.)

During a panel discussion about The Pale Blue Eyes, Bale said of Fetterman’s visage: “That’s a face that fits in the 1830s.” And ya know, he’s dead on with that assessment.

Netflix releases The Pale Blue Eye in theaters on December 23rd followed by a streaming release on January 6th.

If you ask 10,000 people what movie they most identify with Philadelphia, 9,999 will say Rocky. The one who says Mannequin is just plain weird.

Anyway, just as I was looking for a new podcast to listen to, now that I’m all caught up on You’re Wrong About … (thanks to NPR’s Gene Demby for suggesting that one to me) I hear that WHYY is set to release The Statue, a podcast about the Rocky statue.

Every year, countless tourists head over to the front of the Philadelphia Art Museum to take photos with the Rocky statue, a statue representing a fictional character. I often wonder how many of said tourists actually proceed beyond the Rocky statue into the museum itself, where there are priceless works of actual art, as opposed to a movie prop, which I guess is art in its own way, but you get the point. 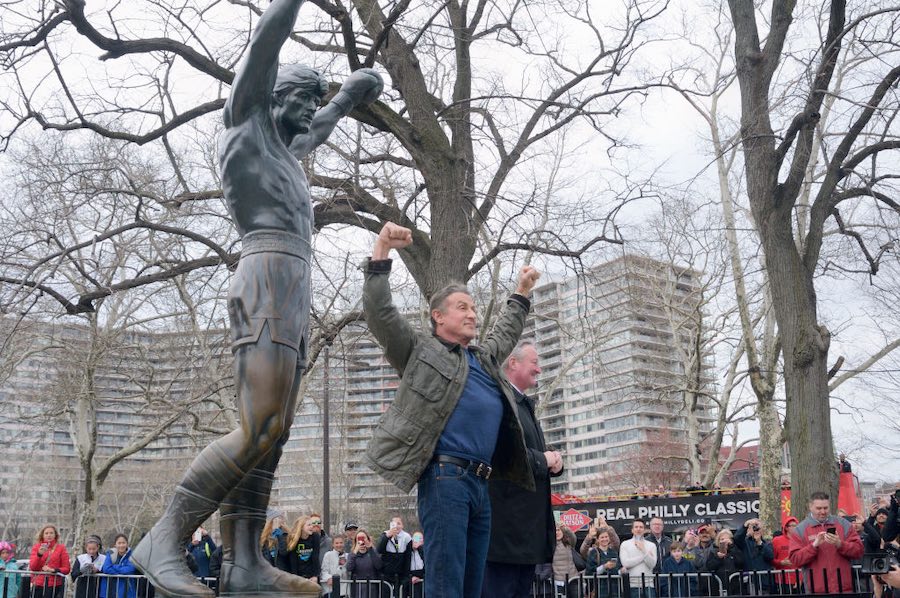 As a press release from WHYY puts it, The Statue “explores a monument to the most famous Philadelphian who never lived.” But, this being WHYY, The Statue podcast will go deeper than that. Per the press release: “The Statue sheds light on the stories of real-life Philly boxers, explores the neighborhoods around the city that run parallel to the statue, shares about the ancient craft of sculpture, and more.

The host of The Statue podcast, Paul Farber, is no schmuck. He’s the director of Philadelphia’s Monument Lab and the senior research scholar at Penn’s Center for Public Art & Space. For a 2021 Philly Mag article, Farber picked the five most meaningful monuments in Philadelphia and explained his choices. Alas, the Rocky statue didn’t make the cut. But a sort-of monument to actual Philly boxers did. Read his picks here.

This is the trailer for the podcast:

The Statue debuts in January wherever you get your podcasts.

Because $6,100 for an unsigned copy of the Eagles Christmas album makes absolutely no sense.

Meanwhile, one reseller told me (via eBay message) that he is a local politician and that he will be donating some of his profits to two Delco charities. But he won’t tell me who he is. Womp womp.

As seen at Sunday’s Eagles-Giants matchup: 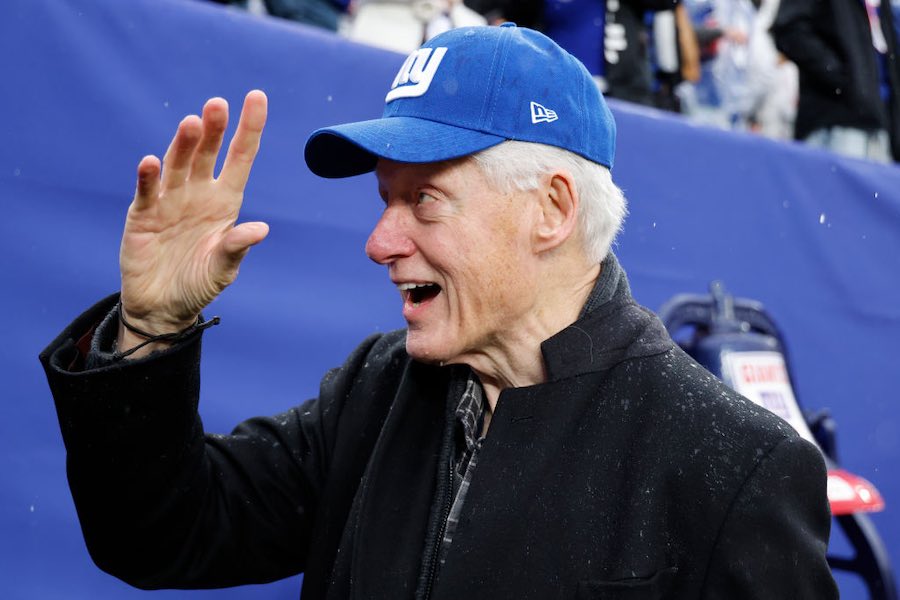 The Return of Christopher Columbus

Well, or at least of the statue. After a court victory last week for those who objected to the city’s actions surrounding the Christopher Columbus statue in South Philly, crews removed the box covering the statue over the weekend. We’re sure nobody will vandalize it.

You Know Things Are Bad When …

Pennsylvanians are among the most generous people in the nation — at least on GoFundMe — per this just-released report. So you should definitely head over to GoFundMe now and make a donation to Philadelphia’s Young Chances Foundation, whose Best of Philly-winning founder, Tyrique Glasgow, just won a CNN Heroes award:

Tyrique Glasgow was shot 11 times and spent five years in prison. When he returned home, he decided to become a positive force in his community. #CNNHeroes pic.twitter.com/6YGfDFoGWK

And from the What-Me-Worry Sports Desk …

In Sunday’s Eagles game, in what looked to be a very, very cold and rainy MetLife Stadium on Sunday, Miles Sanders ran the football in for a touchdown on the Birds’ first possession.

Then DeVonta Smith caught a 30-yard pass for another TD. How could he have been double-teamed and that wide open?

A long TD pass to A.J. Brown at 8:16 in the second quarter made it 21-0. “Like taking candy,” play-by-play guy Joe Davis declared. He was right. It’s been a weird feeling, as a lifelong Iggles fan, not to think that this team isn’t constantly teetering on the brink of disaster.

the Eagles are sooo good it makes me uncomfortable

Be careful what you wish for. Aaryn Siposs’s punt was tipped by a Giant, and while Siposs scooped the loose ball up heroically and ran, he couldn’t quite get to the first-down marker, so the ball went to the Giants at the 15-yard line, and they scored: 21-7. The worse news: hero down.

They put Siposs immediately on the cart and now he’s headed inside. pic.twitter.com/aqbCl28pDn

Siposs wouldn’t return. Jake Elliott nailed a field goal with seconds remaining in the half to make it 24-7.

Early in the second half, another Elliott field goal made it 27-7 in the continuing cold rain. The Giants looked miserable, but they managed to pull it together.

Score: 27-14 Eagles. I was starting to feel that familiar anxiety with 5:40 left in the third. But Jalen Hurts just about singlehandedly worked the ball all the way down the field and then strolled in untouched for a TD: 34-14.

The fourth quarter was more of the same. Sanders ran 40 yards for the longest touchdown run of the season, and the Eagles were up 41-14 with six minutes left.

And one more Boston Scott touchdown made it 48-14. Man, it’s beginning to not seem fair to make other teams play our team. Marcus Epps got called for unnecessary roughness as the Giants scored a who-cares touchdown and then made the two-point conversion thanks to the penalty yardage. Final score: 48-22 Eagles. Go team!

Kicking off the weekend, in Friday night’s Sixers home game against the Lakers, at the end of the first quarter, Joel Embiid had 20 points, and our guys were up 31-20.

Easy-peasy, right? Uh, no. With Embiid taking a breather on the bench, the Lakers tied it at 33. It stayed close through the rest of the half, and James Harden put us up 61-59 Sixers at the half.

At that point, my husband wanted to watch the replay of the end of the Netherlands/Argentina World Cup quarterfinal. My marriage is worth keeping, so we did. You don’t care much who won, and neither did I. When we got back to the Sixers, it was 79-75 halfway through the third quarter. But the soccer game was going to overtime, so what to do, what to do?

I deferred, and we stuck with soccer, with me following the Sixers score online. At the end of the third, it was 93-83 Sixers. Naturally, the first game in ages where they’ve played well, and we’re in Qatar. The things we do for love.

That’s when the shit hit the fan. Suddenly, the Sixers were only up by two with 10 seconds left.

De’Anthony Melton played his head off in the, uh, fifth quarter.

I will make no comments about whether the win is safe or not.

He had a career-high 32 points and seven steals. After a shot clock violation on Lakers, we were up by 9 with a minute to go. There was a bizarre technical foul called on Patrick Beverley for … defending against the official? Then it was all over, thank God. What a weird game.

An absolutely bonkers game that will be remembered for the Sixers’ epic collapse. But they were terrific in overtime, outscoring LA 13-2. And don’t forget De’Anthony Melton’s brilliance — 33 points, eight threes and seven steals.

And on Sunday, the Charlotte Hornets dropped by for a visit. Sixers were looking sharp!

In the first two minutes of the game, NOBODY scored. Joel kicked things off, finally, and like that bunny, just kept going and going. At the end of the first quarter, Charlotte was up by one, 21-20 — but the Sixers had a 7-0 run. This was not an elegant game. Halfway through the second, the Sixers went on a 10-0 tear and went up 37-33. They kept the momentum through the rest of the quarter and were up 61-54 at the half.

15 points for Joel Embiid in the last 3:03 of the first half, including three old-fashioned 3-point plays. Can't imagine that happens all that often.

Embiid has 28 points at halftime and the Sixers lead the Hornets 61-54.

In the third, there was a touch less intensity, and the Hornets brought it to 80-89 with three minutes left. It got real messy fast – Joel missed a jam, and Furkan Korkmaz clunked two missed foul shots. Joel hit 35 points and 11 rebounds, for a record:

Joel Embiid has just become the fastest player in NBA History to 100 30pts-10reb games. A record that used to be held by Shaquille O’Neal. pic.twitter.com/9L6wnoyNtJ

The quarter closed with the Sixers ahead 96-87. They’d hold onto the lead for the rest of the game. Joel got a well-deserved seat with 53 points on the night, and danced in it.

In college hoops on Saturday, it was the Drexel Dragons over the La Salle Explorers in overtime, 65-58.

Bits and tidbits! Army beat Navy at the Linc, 20-17 in the first overtime matchup between the teams in the rivalry’s 123-year history.

A crowd of 69,117 poured into Lincoln Financial Field for the 123rd meeting of these historic rivals, which saw the Army triumph over the Navy in double-overtime. Boston will host the 2023 game. https://t.co/fFePVJ8Udt

And if you were wondering how Mount Holly’s Isabeau Levito did at the Grand Prix Final, she done good!

The Ringer ran a fun story on the Eagles fans lurking among D.C. political journos, including our own Jake Tapper.

"Until his mid-20s, Costa, who cowrote a Trump book with Bob Woodward, called into WIP as “Bob from Yardley.”"https://t.co/nowKcxPb3k

And in case you missed the cool NFL Films tribute to Ray Didinger, you can now catch it on YouTube.

I really hated those kits.

Oh, and the Flyers played.