5 of Philly’s Most Meaningful Monuments, According to Monument Lab’s Paul Farber

Paul Farber and his team at Monument Lab specialize in helping communities dream about not just what monuments should be, but also what they could be. 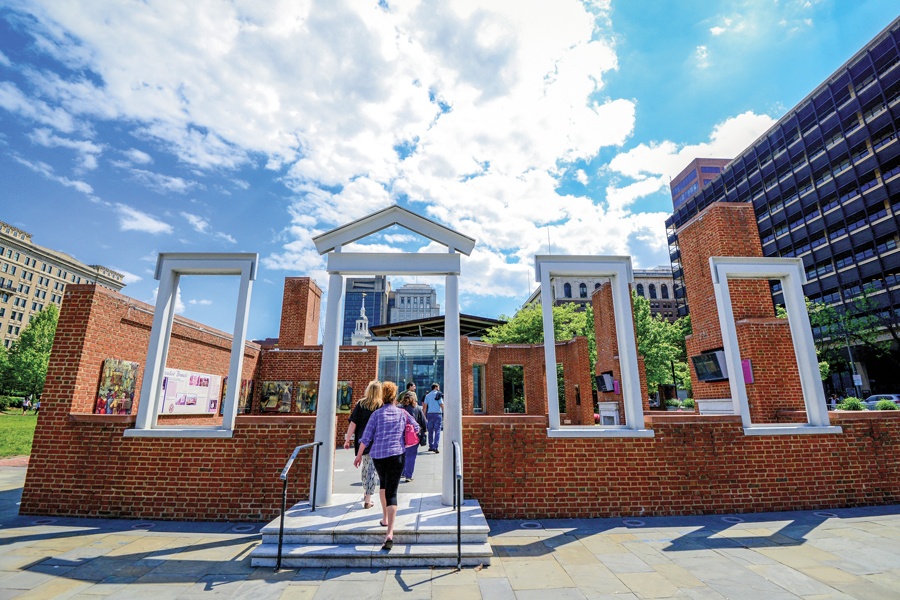 The President’s House, one of the most meaningful Philadelphia monuments, according to Paul Farber. Photograph by M. Kennedy for Visit Philadelphia

Opened in 2010, it shows where George Washington’s and John Adams’s households existed along with Washington’s slave quarters. There are historical markers with the names of the nine enslaved people who once lived there and information about Oney Judge, who escaped. “What’s powerful about the space is the story behind it,” says Farber. “It was the work of community leaders, historians and advocates who said, ‘We can’t separate these stories. The story of American freedom is also of enslavement.’ The fragments of the house tell a truer story than the restoration or solid architecture could.” Independence National Historical Park, 6th and Market streets, Washington Square West.

The William and Letitia Still House

In the 1850s, this tiny rowhome gave shelter to hundreds of escapees and their guides (including Harriet Tubman) as they fled the South. Farber’s take: “A major site of Philadelphia’s Underground Railroad history that activists have fought to preserve.” 625 South Delhi Street, Bella Vista.

An archive might not be the first thing that comes to mind when you think of monuments, but the collection at William Way is indeed monumental. “One of the most crucial sites to learn about LGBTQ history in the city,” says Farber, “including collections containing materials from renowned activist Gloria Casarez and the Philly AIDS Coalition to Unleash Power (ACT UP) chapter, among many others.” 1315 Spruce Street, Midtown Village.

Is Claes Oldenburg’s massive work of public art the simple elevation of a common object, or a towering depiction of a passionate embrace? Philadelphians have been debating this since Clothespin became an indelible piece of our urban fabric in 1976. “I remember back at the first Monument Lab exhibition in the City Hall courtyard in 2015, poet laureate Yolanda Wisher gave a talk in which she shared that for her, the Clothespin symbolized home,” says Farber. “I think of her words every time I see it.” 15th and Market streets, Center City.

This winding path through Fairmount Park, which became a training ground for legendary Philly pugilists in the 20th century, was restored in the early 2000s. Farber’s take: “A place to celebrate real-life Philly boxers past and present, including Bennie Briscoe, Joe Frazier, Bernard Hopkins, and Matthew Saad Muhammad, created by the Fairmount Park Conservancy and Little Giant Creative.” East Fairmount Park.

Published as “Monument City” in the October 2021 issue of Philadelphia magazine.