The victories of Fetterman, Shapiro, and Davis gave Democrats statewide power they haven't seen in years. 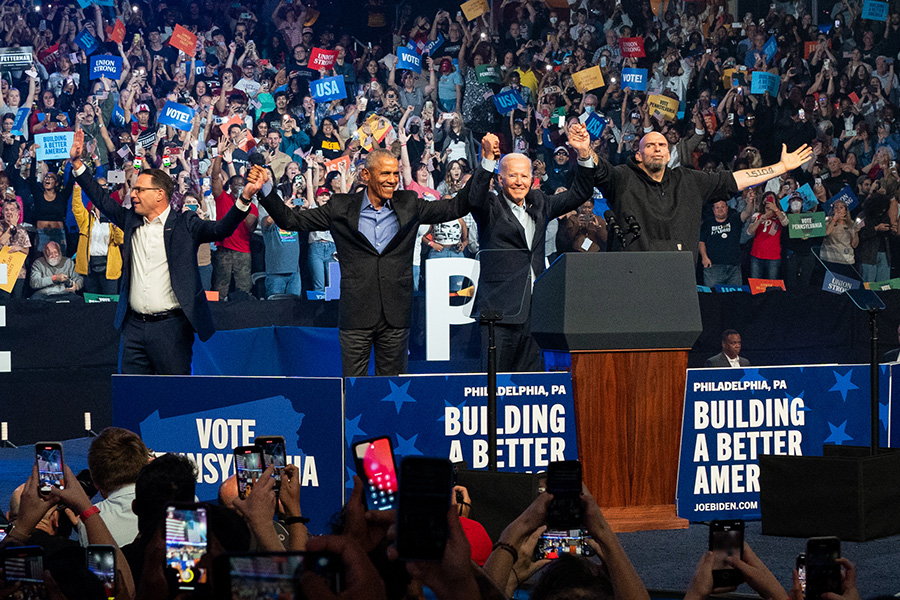 Josh Shapiro, Barack Obama, Joe Biden and John Fetterman in Philly, days before the midterm election brought a “blue wave” to Pennsylvania / Photograph by Caroline Gutman for The Washington Post via Getty Images

Tuesday’s midterm election in Pennsylvania was an astonishing “blue wave” as Democrats held the governor’s mansion and flipped a red U.S. Senate seat. For the first time since 2010, Democrats are declaring they have flipped the state House — which would give their new Democratic leaders more power in the Commonwealth. While some pollsters considered the race between Lieutenant Governor John Fetterman and Mehmet Oz a “dead heat,” Fetterman was able to prove his doubters wrong in what became the most expensive U.S. Senate battle in Pennsylvania history. There were many factors that turned the tide on a red tsunami that never seemed to materialize in the Commonwealth — and Philly is a major one.

Looks like those aggressive TV attack ads and spammy get-out-the-vote texts worked: Voter turnout in Pennsylvania seems to have increased from the 2018 midterm election. Just like in the 2016 and 2020 elections, the Democratic cities of Philadelphia and Pittsburgh showed they can still make or break any blue advancement in Pennsylvania. National party leaders — President Biden, VP Harris, and former President Obama — knew this as they held rallies and made frequent appearances in Philly during the final days leading up to the election. Celebrity tours by the likes of hometown hero Questlove and actress Kerry Washington further upped the enthusiasm of voters who might have been on the fence about whether to show up. Despite all the traffic snarls and overheated election fever, the celeb visits seem to have paid off.

Trumpism took a hit in the Commonwealth.

Former president Donald Trump’s influence appears to be waning in Pennsylvania. Election denier/gubernatorial candidate Doug Mastriano may have been the clear winner in the Republican primary, but he was defeated handily in the general election by Democrat Josh Shapiro. And while Trump backed Oz against Fetterman in the Senate race, it wasn’t enough to tip that race, either. It’s clear that in the wake of Trump’s loss here in 2020, his star only continues to fade.

Fetterman is a tattooed progressive who wears shorts and hoodies more than suits. Shapiro is a buttoned-up white-collar moderate who’s an establishment favorite. Austin Davis is a Black millennial State Representative from Western Pennsylvania. One could argue that they comprised as unconventional a slate for, respectively, U.S. senator, governor, and lieutenant governor as we’ve seen hereabouts. But unconventional times call for unconventional measures: Both Fetterman and Davis won their contested Democratic primaries against viable challengers and joined Shapiro (who won his primary unopposed) on a midterm ticket that rallied an ideologically diverse set of voters. There was something for everyone this time around — voters of color, millennials, moderates, suburbanites, progressives, blue-collar voters, white-collar voters — and that should influence how parties approach future elections here.

There were other major historic victories across the state.

Davis became the first Black candidate (and at 33, the youngest) to be elected lieutenant governor, and Democratic State Rep Summer Lee became the first Black woman elected to represent Pennsylvania in Congress. With the state House flipping blue, that will now make State Rep. Joanna McClinton the Commonwealth’s first woman Speaker of the House.  But there were historic victories in other races. In special elections held in Philadelphia, Anthony Phillips became the youngest member of City Council, at age 33 (he’ll replace Cherelle Parker as she runs for mayor), and Quetcy Lozada became the second Latina woman ever elected to City Council (replacing her mentor, Maria Quiñones Sánchez, who’s running for mayor). May these major milestones in political representation foreshadow more progress in the races next year.