Philly Today: Glory, Glory, Hallelujah … the Election Ads Are Over

Plus, some insight into the Pennsylvania election results, including which Philly neighborhoods went for Oz and Mastriano. 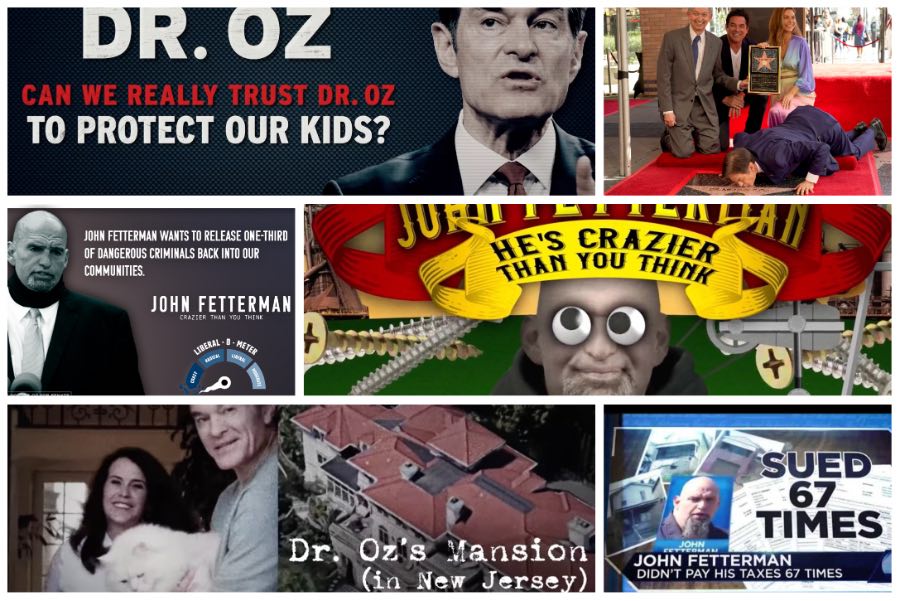 Dr. Oz and John Fetterman campaign ads, which are finally over now that the Pennsylvania election results are in.

I’m Happy With the Pennsylvania Election Results, but Even Happier Those Campaign Ads Are Done

If you follow my ranting and ramblings at all, you probably know that I woke up pretty pleased with the Pennsylvania election results. And I get that there are a whole lot of people out there who are not. It’s the nature of an election, of course.

I woke up on Wednesday, November 9, 2016, absolutely despondent that an ableist, corrupt, lying, misogynistic poor-excuse-for-a-man who basically admitted to sexually assaulting women was to be crowned lead despot, thanks in no small part to the Pennsylvania election results.

So while I am pleased with these particular Pennsylvania election results here in 2022, I am a human being and can, therefore, have empathy for you if you are sad, angry, shocked; if you feel that the world is about to end; that we have been thrust into some dark age of hyper-woke socialism. I commiserate.

While this would be a natural moment for us to argue with each other, for us to feed the great polarization monster that is ripping society as we know it apart, might I suggest an alternative course of action? Let us now come together in solidarity on the one point that I guarantee you, no matter your politics, your race, your creed, your religion, your sexual preferences, your pronouns … the one point that we all can agree on.

We can rejoice that the ads are over.

I’ve always paid very close attention to campaign ads. I started my career in journalism as a fact-checker. (God bless fact-checkers.) And so campaign ads have always held this sort of fascination with me. And let me tell you, the campaign ads this season have been absolutely brutal, both in their content but also in their frequency.

The Dr. Oz-John Fetterman race was at the center of all this. It was the most expensive Senate race in history. And what did they spend all that money on? These toxic campaign ads that ran morning, noon and night. Every time one came on TV, I felt like I was being poked in the eye, no matter who the candidate was.

Many of my friends would normally be blissfully unaware of television campaign ads, because they are cord cutters whose lives generally revolve around streaming. But thanks to the World Series and this magnificent Eagles season we find ourselves in, they, too, were awash in all the negativity.

This was the first election that my own children — girl, 15, boy, 16 — paid close attention to. And they found the campaign ads childish, moronic at times, and sometimes just bizarre to the point of almost becoming a comical “thing” in my household. So, congrats, candidates. My teenage kids think you are all childish fools.

But that’s all over. Your normally scheduled commercial programming will now return. (I honestly can’t even remember what the ads were before. My Pillow? Swiffer? Idarucizumab?) We can all breathe a sigh of relief.

Until next time. Which is coming up far too soon.

About Those Pennsylvania Election Results

You probably already know that Josh Shapiro trounced Doug Mastriano for governor. And that John Fetterman defeated Dr. Oz. But let’s take a bit of a deeper (but not too deep, I promise!) dive into the Pennsylvania election results, which aren’t 100 percent final. But final enough to talk about.

Philadelphia is, of course, a Democratic stronghold. Some of the surrounding counties, though, not so much. But Fetterman came out on top in the entire five-county region. (Nearby Lancaster and Berks counties went Oz.) In Delaware County, which has no shortage of Republicans, Fetterman’s vote count isn’t far from double that of Oz.

Here in Philadelphia proper, just over four out of five voters cast their ballot for John Fetterman. The only places where Oz “beat” Fetterman in Philadelphia (and this won’t exactly be a shocker): the far, far Northeast, and the 26th Ward, aka the part of deep South Philly where people worship Christopher Columbus and Frank Rizzo. Division 26-02 of South Philly: you deserve a free crudite delivery from Dr. Oz, because you came out with a whopping 72 percent of your vote for the good doctor.

Josh Shapiro easily topped Doug Mastriano in the aforementioned five county area. In Philadelphia, Shapiro scored a positively expected landslide, with 85 percent of the vote. Of course, 26-02 came through for election-denier Mastriano, casting 64 percent of their votes for him.

Philadelphia Democrats won in all of the state representative races except for the one in the 170th District, where Republican Martina White ran unopposed. (And this wasn’t exactly a big task for the Democrats, since most of them, too, ran unopposed.)

Democrats came out on top in all congressional and state senate races. And thanks to the special elections, we now have four new City Council members, all Dems. Jim Harrity. Sharon Vaughn. Quetcy Lozada. And Anthony Phillips. Hopefully they don’t make things worse than they already are. I’ll be watching. Closely.

And because you’re dying to know, both ballot measures (something about aviation and technical schools) passed. Because ballot measures almost always pass. And most people have no clue what they are actually voting for.

Could the Dems Flip the PA House?

Election Day Turned Out to Be a Quiet One

While there were lots of fears about what might happen in Philadelphia on Election Day (namely the potential for armed “patriots” to show up to “monitor” the election), this was a pretty relaxed Election Day. Turnout was strong. Problems were minimal. Most complaints were about electioneering. Zero arrests. The journalist in me, since I usually cover election shenanigans, felt a little let down. The citizen in me is quite happy.

So Fox has called it for Shapiro at the Mastriano party. There is a prayer circle and Danny Gokey and the band are playing Superstition by Stevie Wonder.

Waiting for Doug to come back out, and will see if he concedes… pic.twitter.com/DMRo5QzSO2

Between the World Series, all this election angst, and the damn “fall back” clock thing in the middle of it all, your sleep schedule is probably all messed up. Fortunately, my colleague Laura Brzyski just published this handy guide to rebounding from all that lost sleep.

And from the Nothin’-Much-How-’Bout-You Sports Desk …

Talk about your slow sports nights — unless, of course, you’re counting political races as a sport, which a lot of the country apparently does. As the dust settles on our national pastime, here’s the scant news we have to report.

TV viewership for the MLS championship game between the Union and Los Angeles FC on Saturday was rockin’.

Another key #MLSCup TV viewership stat, perhaps the most important one for my audience:

Philadelphia was the No. 1 local market for Fox's broadcast with a 4.78 rating, nearly tripling everyone else.

Some voters employed rather dubious means to lure others to the polls.

There’s a whole lot of Zach Eflin/Aaron Nola/Jean Segura contract crapola floating around, but all that stuff is way too complicated for me (or any normal person) to follow. But Kyle Schwarber had some nice thoughts about the fans and the season.

THANK YOU Philly for making our first year here so memorable! You guys were ELECTRIC! This was a special group and you guys kept us going until the very end! We can’t wait to make many more memories here with you guys! Thank you guys again!#RingTheBell pic.twitter.com/rZT1bBSiPc

And so did Jean Segura. Hey, guys, love you back!

Philapheldia don’t know what to say. Been thinking about it. We did our best, we wanted to win it for you all. Came up a little short. Greatest season of my life. Hopefully I’m back next year to win it. If not, I love you all. #RingTheBell pic.twitter.com/8XK5tm2c62

Finally, what say you? Is this a goosefish or Sea Gritty?

That is a Sea Gritty https://t.co/oUBO8IktnL

That’s it! Eat some crudités!