The shenanigans have begun. Here's what you need to know to get through Election Day. 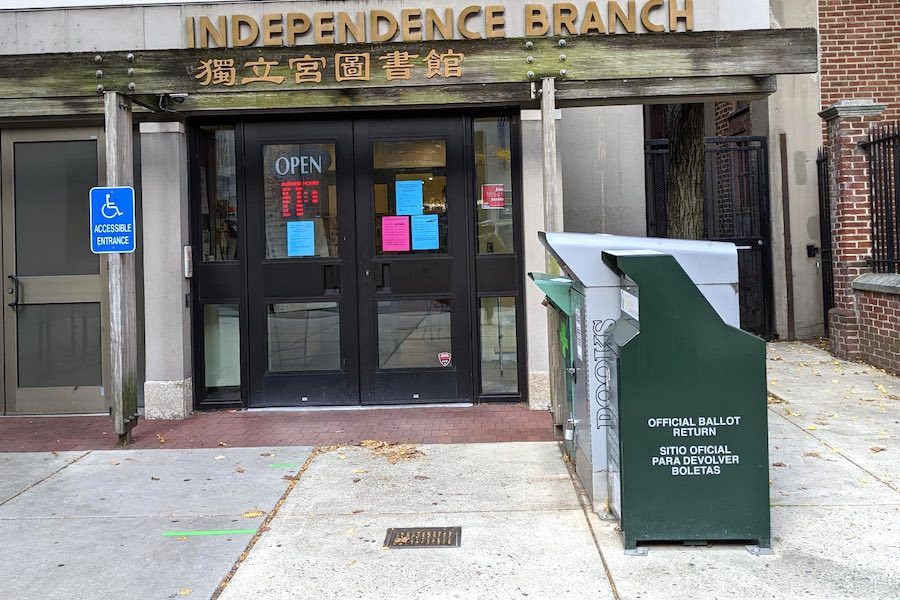 Secret surveillance cameras or field cameras were found at ballot box locations in Philadelphia, including this one outside the Independence branch of the Philadelphia Free Library (photograph by Brian Howard)

Field cameras are hidden surveillance cameras that hunters use to track deer movements. But in Philadelphia, field cameras appear to have taken on a much different purpose: secretly recording voters.

We’ve heard from numerous sources that field cameras have been found near ballot drop boxes across the city over the last day or two, positioned to record voters using those drop boxes for their mail-in ballots.

Former Philadelphia City Commissioner Al Schmidt, now the head of the city’s non-partisan political watchdog Committee of Seventy, confirms that at least two field cameras were found and removed. Those cameras were at the Shissler Recreation Center in Fishtown and Independence Library in Center City.

“It’s not necessarily illegal to place these cameras where they were,” Schmidt told us on Monday night. “Nor is it illegal for them to be taken down. Some voters could find them intimidating.”

City officials stress that investigators did a full sweep of all drop box locations prior to the polls opening at 7 a.m. on Election Day.

The lead-up to Election Day has been brutal, hasn’t it? No matter which “side” you are on. The absolute barrage of negative ads. The mudslinging. Misleading statements. Misinformation. Ugh.

Well, Election Day is here, Philadelphia. And it’s time to get out and vote, assuming you haven’t already. Polls close at 8 p.m. across Pennsylvania, at which point we’ll all be positively glued to the results. You can find official results here.

Our procrastinator’s guide to the election, including … what the hell those weird ballot questions are all about.

Problems at the polls? You know there are going to be some. Here’s what to do about them.

Did you use a mail-in ballot? Hundreds of voters filled them out incorrectly. Check to see if your name is on the list the city published. But do it now while you still have time to fix the problem. (Don’t feel bad: Comcast CEO Brian Roberts screwed his up as well.)

And because ya gotta eat: Election Day food specials and deals aka where to flash your “I VOTED” sticker to get a free slice of pizza.

Because You Need a Good Laugh

On a day like this, we all need to decompress. Might I suggest you check out my colleague Hannah Albertine’s amazing interview with the person who will be forever known as the Philly Chicken Man.

And the Winner of Philly’s 2022 Liberty Medal Is…

And from the Well, That’s Better Sports Desk …

Still glum about the Phillies’ World Series flameout? This should comfort you. It’s Ted Cruz getting booed at the Astros’ victory parade!

Ted Cruz pulled off what I thought was impossible- getting booed at a championship parade. pic.twitter.com/B4oVgP404Q

And if that doesn’t do it, rumors are circ’ing that Carson Wentz has lost his Washington Commanders starting quarterback job:

Final day of campaigning in #PAGov: At a Mastriano rally in Bucks County, a woman on stage sings the Fiddler on the Roof soundtrack with lyrics full of praise for Mastriano

“We want you to be the governor. That’s what all the people pray.”

In less schadenfreud-y sports news, the Sixers played the Phoenix Suns — the best team in the West — last night at Wells Fargo Center, and hey, Joel Embiid was back from his flu/knee hiatus. James Harden is still out, of course, for another month with a right foot tendon strain. Starters: Joel, Harris, Maxey, Tucker, and De’Anthony Melton, also back from the flu.

Two big stories out of this game. Suns star Chris Paul left with an injury to his heel in the second quarter, which, well, if you’re playing the Suns, that helps, right? It was 56-47 at the half, and Joel had 18. And Georges Niang went on a three-point tear, hitting seven for a new career high. Still, the Suns kept it close through three quarters, with the two teams trading scoring runs. This time, though, the Sixers didn’t fold but prevailed, 100-88. Embiid had 33; Harris and Niang each notched 21. Here’s what Joel Embiid had to say:

For those who care, the Flyers play tonight.