Philly Today: If You Voted By Mail, Stop Whatever You’re Doing and Check These Lists

The city has published the names of hundreds of voters whose mail-in ballots are problematic. 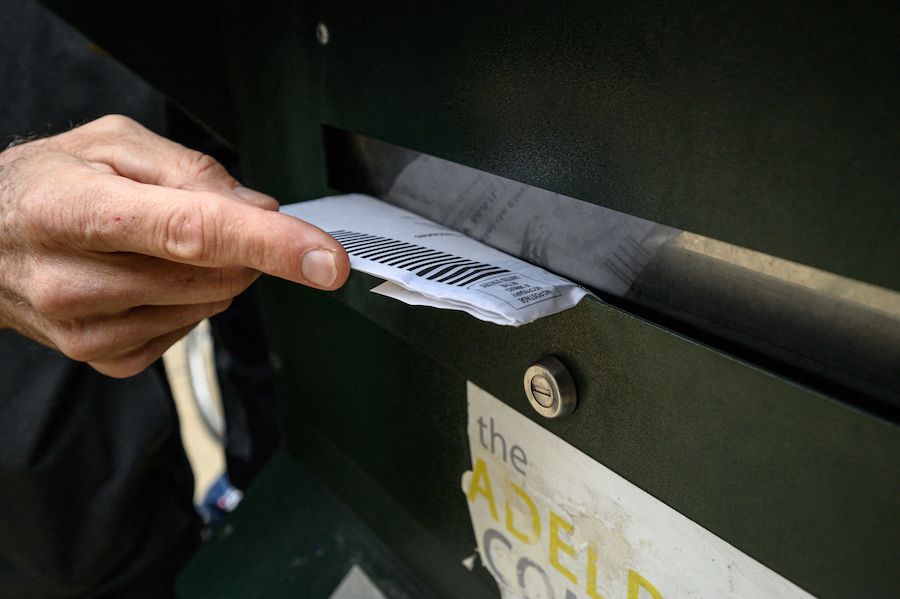 A voter casts a ballot at a drop box outside Philadelphia City Hall on October 24, 2022. Philadelphia’s 18 secure mail-ballot drop boxes, positioned around the city, are monitored by security cameras and equipped with fire-extinguishing systems to protect against tampering. (Photo by Ed JONES / AFP) (Photo by ED JONES/AFP via Getty Images)

Voted By Mail? See If Your Name Is On These Lists ASAP

Tens of thousands of Philadelphians opted to vote by mail in this pivotal (OK, that’s putting it mildly) mid-term election. But there’s a good chance that many of their mail-in ballots are not going to be counted.

I voted by mail the very first day it was possible. In fact, I was the first person in Philadelphia to do so this cycle. And I have to admit, the process is more confusing than it needs to be. There are multiple envelopes. You have to sign and date just so. As I stood there at City Hall prepping my mail-in ballot, I was a little worried that I was going to make a mistake. And I saw how easy it would be for others to make mistakes.

Well, unfortunately, lots of mistakes have been made. And if you were one of the voters who made mistakes on their mail-in ballots, your vote might not be counted. That’s the bad news.

The good news? The city has published lists of voters by name whose mail-in ballots are problematic. The lists include each voter’s zip code, birth year and voting precinct. Some of these ballots are unsigned. Some are undated. Other mail-in ballots on the lists are dated but bear a potentially incorrect or illegible date. And others weren’t enclosed in the secrecy envelope.

The voters come from all over the city. On one list alone, we found 17 voters in Northern Liberties, 15 in Roxborough, and 32 in just one South Philadelphia zip code. And, again, that’s just one list — the one indicating that the ballot was naked, i.e., that no secrecy envelope was used.

So here’s what you need to do.

If you voted by mail, check the lists for your name. (The lists aren’t alphabetized, so you’ll need to use the search function.)

And if you’re unable to get there yourself due to a disability, you can send somebody else by filling out this form.

But if none of that works for you, go to your polling place on Election Day (a.k.a. Tuesday!) and request to vote by provisional ballot, says City Commissioner Seth Bluestein, one of the Philadelphia officials in charge of our elections.

If you don’t live in Philly but have concerns, contact your county board of elections immediately.

Don’t sleep on this. Do it now.

John Fetterman Is a Wawa Man

In case you missed it, John Fetterman, Josh Shapiro, President Joe Biden and former prez Barack Obama all descended upon the Liacouras Center on Saturday for a huge rally.

But more importantly, he finally made his position clear on the polarizing issue of Sheetz vs. Wawa. And though he’s decidedly from Sheetz Country, Fetterman told the crowd he’s a Wawa man. I’m betting he’s a meatball Classic guy.

Thanks to C-Span, you can watch the entire rally here. Some great moments. Some flubs. Entertaining entry-music choices.

Hey, You Gotta Have Goals

A Barclay Prime server just completed a 40-day challenge in which he ate nothing but rotisserie chicken, day in and day out. Yes, this made it all the way to the New York Times. News you need.

Just When We Were Getting Used to This Unseasonable Warmth

I spy a 32 in our seven-day forecast. Meanwhile, if you’re looking for your last beach hurrah, I’d call out of work right quick and head down: 75 and sunny today. You might not get another opportunity like that until June.

And from the There’s Always Next Year Sports Desk …

So how was your weekend?

No, seriously. Considering that our sports teams spent Saturday doing what no city’s sports teams had ever done before …

The city of brotherly love is the first city ever to lose two pro sports championships on the same day. pic.twitter.com/jMqUGDkqiQ

I think we should all be standing a little taller. What could possibly be more Rocky, or more Philly, than that?

Oh, sure, it stung like hell to watch the Union on Saturday afternoon play Los Angeles FC for the MLS Cup — Jim Curtin’s team’s first-ever shot at that title, btw. It was agonizing to see the Union’s José Martinez get called for a foul, and for Kellyn Acosta’s resulting free kick to bounce off Jack McGlynn’s head and whiz past Andre Blake into the corner of the goal. But the Union bounced right back in a brawling second half to tie it up at 1-1 in the 58th minute, as Dániel Gazdag took a pass from Martinez — well, Martinez meant it as a shot — and redirected the ball into the net.

Here’s a look at that Dániel Gazdag goal ⚽️ that brought the Union even with LAFC in the #MLSCup. How are you feeling, #DOOP fans? pic.twitter.com/KduLPP9xcp

The announcers were already talking overtime in the 82nd minute when Jesús Murillo scored again for L.A. Damn. But with seven minutes of overage added, Jack Elliott scored on a set piece, taking a kick from Kai Wager.

And on we go into 30 minutes of overtime!

The final 10 minutes of that game were as exciting as any sporting event I’ve ever seen. L.A.’s goalie, Maxime Crépeau, came out from his goal on a breakaway by Cory Burke, and the result was …

Massive and scary moment with 10 minutes left in extra time of #MLSCup. LAFC GK Maxime Crépeau races off his line and is badly hurt after attempting to cut off Cory Burke’s path to goal

Everyone was waiting to see the replay, but it turned out Crepeau’s leg was broken, so Fox didn’t show the gory replay. Crépeau earned a red card for fouling Burke as he was stretchered off the field. In came L.A.’s backup goalie, John McCarthy, a local lad who played at La Salle and then for the Union for several years.

Jack Elliott managed to slam in a goal for us in the 124th minute off a cross from Kai Wagner, to put the Union up 3-2. It was the latest goal ever scored in MLS playoff history! Fox showed a shot of the delirious crowd watching the game at Subaru Park in Chester going crazy with joy — right up until L.A.’s Gareth Bale headed one in in the 130th minute and we were tied up again. New late-goal record, too. The Union got one last chance with a corner, as Fox analyst Stu Holden declared, “The wheels have come off!” But L.A.’s defense cleared the ball. Time for penalty kicks!

It was former Union goalkeeper and current Union goalkeeper against one another. “This is the greatest MLS game ever!” Holden screeched. That’s when the Union went completely off the rails, not landing a single one of their PKs. We lose, 3(3)-3(0). What’s that line from Hook, though?

And whose team captain got named the MLS Humanitarian of the Year? Ours did!

Now about that Phillies finale on Saturday. Things started out fine, with Zack Wheeler and Framber Valdez in a pitching duel. Nobody got nuthin’ till the top of the sixth, when — guess who? — Kyle Schwarber slammed a solo homer. But that was all she wrote, alas. There’s all sorts of controversy over whether manager Rob Thomson made the right call pulling Wheeler for José Alvarado in the bottom of the sixth, especially because Yordan Alvarez promptly smacked a homer of his own with two on to make it 3-1 Astros, who tacked on one more run just to add insult to injury. End of game. End of series.

Speaking of insult to injury, the Embiid-and-Harden-less Sixers dropped a tight game at home on Friday to the Knicks, 106-104. And on Tyrese Maxey’s birthday, too! He’s all of 22 now. I feel so old. But hey, it could be worse! We could still have Ben Simmons!

“Ben Simmons has been a source of frustration” you say?

In our only bit of civic sunshine, the Temple Owls won their first conference football game of the season, against USF, 54-28. It was 16-14 Temple at halftime, so yeah, explosive second half.

The star was redshirt sophomore running back Edward Saydee, pictured above, who had 334 total yards of offense. Great game, kid!

Hey, losing sucks. No one’s pretending it doesn’t. No parade, no trophy, no flood of national glory, just a mourning cap atop Bryce Harper’s head.

The @Phillies are home!@bryceharper3 and Kyle Schwarber just came off the bus outside CBP to greet fans who wanted to thank them for their #WorldSeries run. @NBCPhiladelphia @NBCSPhilly pic.twitter.com/dbJkrY5aby

But thanks for the memories, guys. You took us for a much, much longer ride than we had any right to expect. You gave us greased poles and bat spikes …

and a barrage of home runs for the ages. We’re not about to stop loving you now. Next year, though …

The Sixers play the Suns tonight at Wells Fargo.