Philly Today: I Watched Fetterman-Oz Debate with the Most MAGA Man I Know 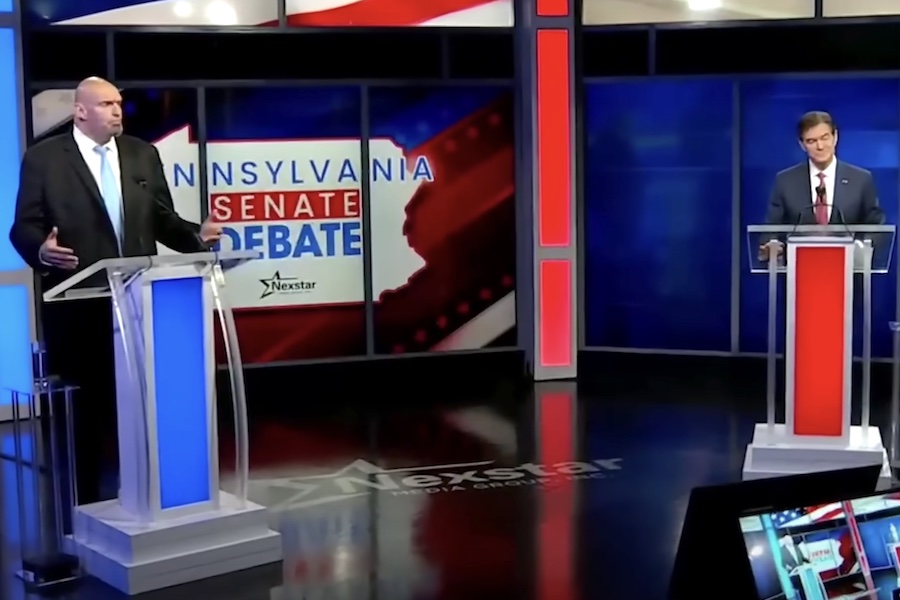 John Fetterman and Dr. Oz square off in debate (screenshot from broadcast)

I decided to watch last night’s Fetterman-Oz debate with the most MAGA man I know. He’s a former law enforcement agent. And he said he can’t remember the last time he voted for a Democrat. (He agreed to watch the debate with me so long as I didn’t identify him. Let’s just call him Don.)

So at 7:30 p.m., we bellied up to a local bar to watch the Fetterman-Oz debate go down. Just before the debate started, somebody at the bar said Fetterman was unfit based on his medical problems alone. (This is something that has absolutely not been proven. Fetterman recently released yet another letter from his doctor saying he is fit for office. But Fetterman has repeatedly stopped short of releasing his medical records).

In any event, Don yelled over to the other person at the bar in defense of Fetterman. He yelled, “They said that Reagan was unfit, too. And he was the best president who ever lived.” (OK, agree to disagree.)

Also before the debate began, Don said to me, “This is a very unusual race for me. I think these guys are both nuts. I just can’t decide which one is nuttier.”

As soon as the debate began, Don remarked, “At least he’s wearing pants!” referring to Fetterman’s penchant for, shall we say, dressing down on the campaign trail.

Don has a bit of a hard time hearing (ironic, I know), and a few times, he asked me to clarify what he just heard Fetterman say. He thought he must have heard it wrong. He didn’t. Fetterman struggled with getting words out at various points of the debate, which he and medical experts have attributed to lingering health issues from his recent stroke.

During the debate, Fetterman called attention to those issues. “I had a stroke,” he said. “[Dr. Oz has] never let me forget that. And I might miss some words during this debate, mush two words together, but it knocked me down, but I’m going to keep coming back up.”

As the New York Times summed up that aspect of the debate:

Mr. Fetterman’s words were frequently halting, and it was apparent when he was delayed in either reading or reaching for a phrase or word. But he was also fluent enough over the course of the hour to present his Democratic vision for a state that could determine control of the Senate.

Don and I both felt that the debate was too short and the rules for rebuttals and such too strict. Fifteen seconds to respond to an important point?

You can get a complete play-by-play of the debate all over the Internet right now . And I’d encourage you to check out WHYY’s live fact-check of the debate, which found misleading statements and other factual issues on both sides. You should also most definitely have a look at this fair and balanced Politico piece by my former colleague, Holly Otterbein.

There are also all sorts of unfortunate videos and memes mocking Fetterman’s health issues, which is just awful. And I personally don’t believe that I’ve seen anything that makes Fetterman unable to perform his duties as a United States Senator. And when given the choice between Fetterman and Oz, uh, yeah, I’m voting for Fetterman. In fact, I already did.

As for Don, he’s waiting until November 8th to vote. And even after watching the debate and hearing other people at the bar making jokes about Fetterman, Don still isn’t sure what he’s going to do. Don is pro-gun (in fact, he was armed on this occasion), but he thinks the decision to overturn Roe v. Wade was a terrible one. And he simply does not like Dr. Oz, who he described as “some rich doctor from TV who doesn’t even live here.” So he is, for the moment, still undecided.

The manager of said bar is not. He’s also a lifelong Republican and generally red bombs the ballot. I asked him if he intended to go Fetterman or Oz, and he said, “Fetterman all the way.” So then I moved on to the topic of Shapiro vs. Mastriano, the other big Pennsylvania race everybody is watching. “Are you going to vote for Mastriano?” I asked him. “Are you crazy?” he replied. “I believe in protecting the Constitution of the United States. So Shapiro is getting my vote.”

Over the pandemic, I heard tales of casual acquaintances of mine exploiting the Pandemic Unemployment Assistance (PUA) program and similar government-assistance programs. And I wondered if the feds would ever catch up with them.

Well, as far as I know, those casual acquaintances haven’t faced any consequences thus far. And, to be clear, I don’t know that they did anything wrong. But that’s certainly the perfectly believable word on the street. Anyway, the feds are catching up with some people in the Philadelphia area.

From a court document filed in the case:

At the start of the pandemic, Johnson spearheaded a large and complex scheme to recruit individuals to provide their identifying information for the filing of fraudulent PUA applications.

Johnson recruited over 90 individuals, including numerous convicted felons, including those
convicted of murder and attempted murder to provide their information. All of the applications
filed, which resulted in nearly a million-dollar loss, listed Johnson’s former address… The scheme was so successful that Johnson was able to purchase a new home outright with cash and then put more illegal proceeds towards the renovation of it.

According to the feds, Johnson, Bundy, Cooper, Barnett and Mitchell submitted (or caused to be submitted) upwards of 100 fraudulent PUA applications to the tune of almost $1 million and then used the allegedly ill-gotten gains.

Prosecutors also charged Johnson, Barnett and Mitchell with sending in bogus Economic Injury Disaster Loan applications to the Small Business Associations for businesses that didn’t even exist. The feds say the three received SBA money ($52,000 alone for Johnson) and used the cash for personal items.

Similarly, the feds charged Edmonds with submitting fraudulent PUA, SBA and Paycheck Protect Program applications and using the money she received on whatever she wanted.

“Pandemic Unemployment Assistance and small business loan funds are intended to help working Americans and small business owners continue to pay their bills and make ends meet, even when revenues have dropped dramatically due to the pandemic,” said U.S. Attorney Romero. “Thieves who attempt to take these funds under false pretenses are taking advantage of others’ misfortune – ripping them off while also ripping off all taxpayers who fund the programs. These defendants allegedly obtained over $1 million in funds that could have helped struggling businesses and individuals.”

And from the We’re Getting Impatient Sports Desk

Phillies manager Rob Thomson will announce today which pitcher will start the first game of the World Series (Friday at 8:03), but it’s widely expected the answer will be Aaron Nola. In Houston, they’re worried about the weather and trying to decide whether to leave the roof at Orange Juice Stadium open or not. A Houston Chronicle headline on Sunday announced that Bryce Harper and this year’s team have made themselves “immortal,” but alas, it’s paywalled. Weird civic stat: Houstonians are 36.1 percent more likely to be wed than Philadelphians. The city’s also excited because Beto O’Rourke has pulled within two points of Greg Abbott in the gubernatorial race.

Well, some of the city is.

In case you were wondering, the Astros have 1.7 million Twitter followers to the Phils’ 1.9 million, so ha-ha, we win! Major League Baseball, meanwhile, tweeted out a poll to its 10.9 million followers asking which team would triumph.

Who is going to win the #WorldSeries?

While we all wait impatiently for the Series to start and stock up on Crisco, the Sixers travel to Toronto tonight to play the Raptors, with tip-off at 7:30. Last night, from my front porch, I watched a murder of big-ass crows dive-bomb a hawk perched atop a church steeple. The raptor never flinched. Not a good sign. Then again, last Friday, the Raptors lost to the Nets.

All Sports Desk coverage is provided by Sandy Hingston.