Philly Today: Scenes from What Was Once Known as Our Columbus Day Parade 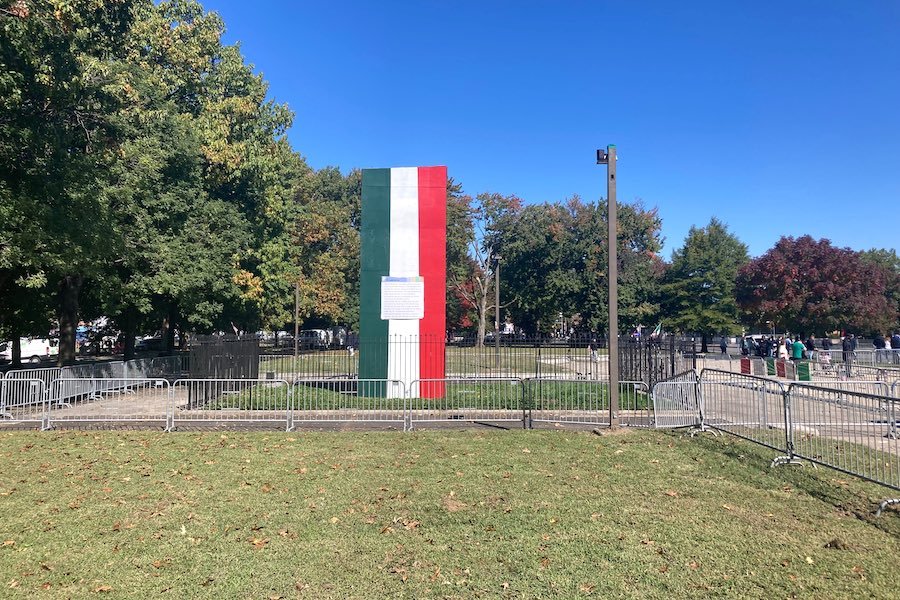 It’s October 10th, everybody! And depending on what side of the culture wars you’re on, that means you are either celebrating Columbus Day or Indigenous People’s Day. (Either way, there’s no trash pickup, some banks are closed, and there’s no mail service. You may or may not have work or school.) 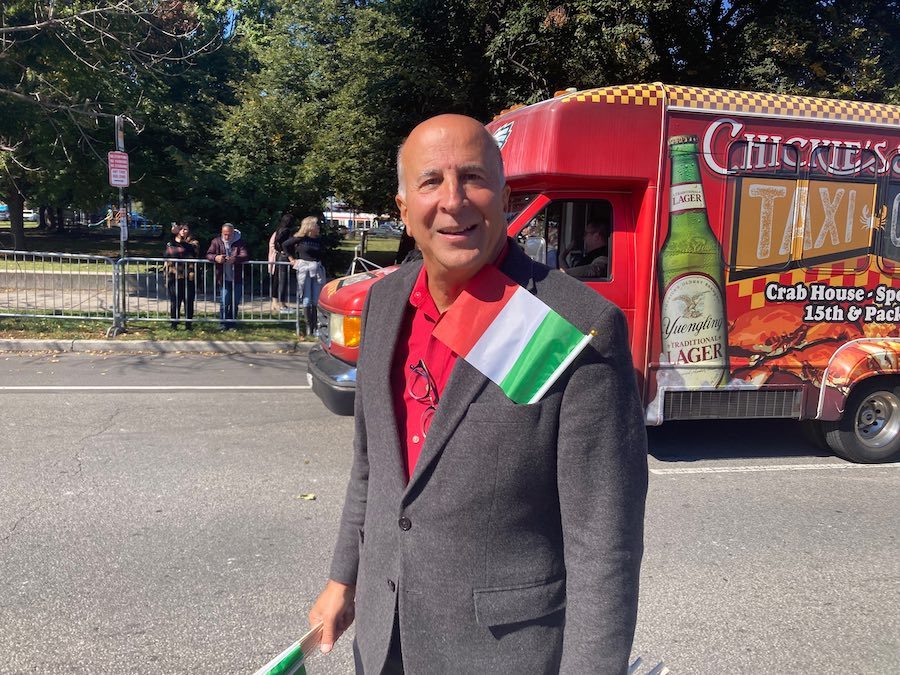 You can thank City Councilmember Mark Squilla for the upgrade. I bumped into him at the parade on Sunday. He lamented that the old plain box had a graffiti problem. The city repainted the box at Squilla’s request, though he told me he’s not sure who picked the color scheme.

Also of note from the parade …

What’s a Christopher Columbus celebration without a giant inflatable Cento can for selfies? 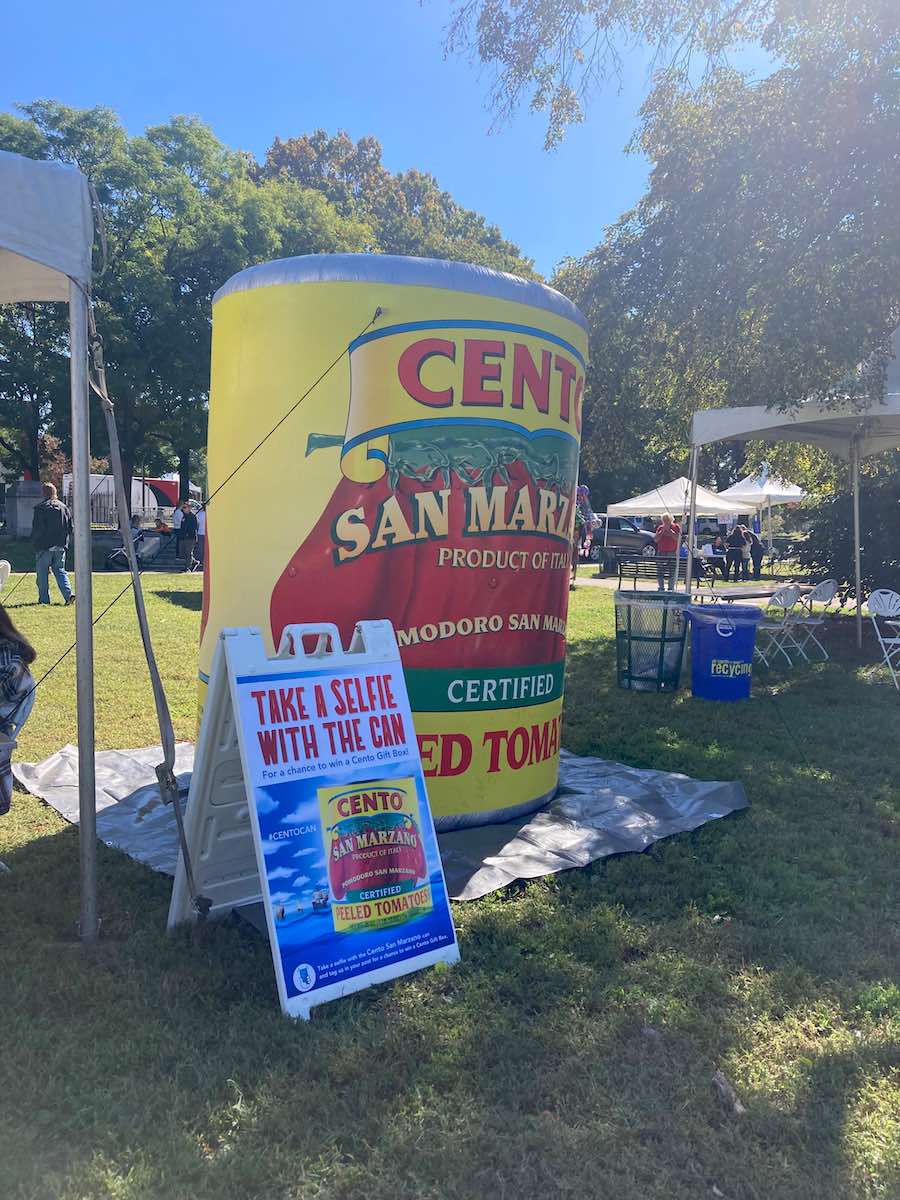 There was also a truck selling cannoli, proudly advertising that their cannoli shells were imported from Sicily. I guess I’ve been spoiled, since I’m used to, ya know, fresh cannoli shells.

I didn’t get a cannoli. I did get an Italian flag. (My last name is, after all, Fiorillo). And I was tempted by an eight-inch-long blinged-out Italian horn pendant but passed.

I did, however, get this Columbus Day flyer, which a woman behind the parade security barrier was handing out to the hundreds of people lining the parade route: 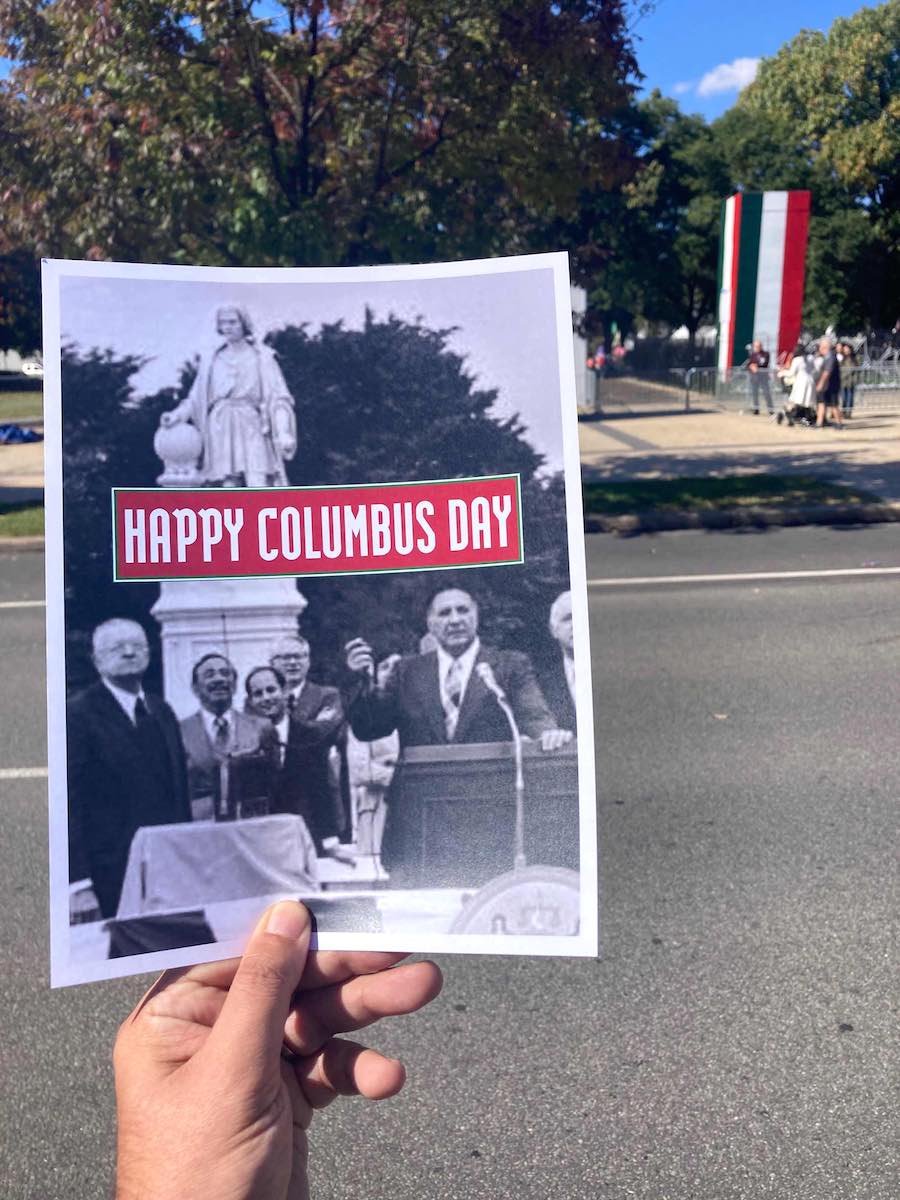 Speaking of the Parade…

I left before Dr. Oz showed up. Womp womp. Dr. Oz and John Fetterman are both spending time in the area ahead of November 8th. And don’t forget: that debate is coming up!

Yes, some people have actually been led to believe that Dr. Oz already won the election. Like, actually won it. Because this is America in 2022, we’re just going to let the fact-checkers sort this one out for you.

Study Confirms What We Already Knew About New Jersey

Nobody wants to move there. That is the conclusion of a new study, which says that New Jersey is the least desirable state for relocation.

It should be noted that this “study” is published not by one of our leading thought institutions but by a relocation company. And its methodology isn’t exactly of the level on which you should base any major life decisions. But, still, fun dinner party conversation if nothing else. (Are people having dinner parties again?)

The Philadelphia Museum of Art Remains Open, But…

You’ll still need to cross the picket lines to go there.

What Is it With These Wawas?

I keep getting asked the same question about that notorious viral video from the Wawa in Northeast Philly. Have there been any arrests? After all, police released pretty clear surveillance images of the perpetrators. But as of Sunday afternoon, a police spokesperson tells me the department has no new information.

It’s a little brrrr as I write this on Monday morning. But sunny and a high of 69 today. And, is that a high of 73 I see in the forecast? I’ll take it!

What Are You Doing This Week?

So many options. And I’m hearing great things about Those With Two Clocks at the Wilma. I saw a workshop version a few years back. Highly recommend you check this out — but most definitely leave the kids at home.

And From the Poke-Us-We’re-Dreaming Sports Desk …

The weekend was a story of nothing and everything. The nothing? That would be the first six and a half innings of the Phils’ Friday-afternoon wild-card playoff game against the Cardinals in St. Louis. Zack Wheeler did a masterful job of pitching. José Alvarado replaced him in the bottom of the seventh and didn’t; Juan Yepez hit a pinch homer to bring home Dylan Carlson, whom Alvarado had just walked. Cards up, 2-0.

Then came the top of the ninth, when … well, let’s let Phillies Twitter tell the story:

There were muffed grounders. Walks. A hit batter. Phils radio play-by-play master Scott Franzke actually giggling — something we’ve never heard before. After Kyle Schwarber smacked a sac fly to bring in Bryson Stott from third, Cards fans, Franzke announced giddily, were walking out of the stadium! Zach Eflin came in to pitch the bottom of the ninth. The Cards did manage a run, but the final score was 6-3 Phils. Phils fans could scarcely believe it. On to Game 2!

It was a study in contrasts, as Bryce Harper led off the second inning by smashing a homer. Alec Bohm, who started the season so defensively shaky, looked like freaking Mike Schmidt at third base. Starting pitcher Aaron Nola looked like … well, like Aaron Nola, giving up a double in the first but nothing more until a base hit with two outs in the sixth. (The Phils tagged on an insurance run in the fifth.) That brought in successive relievers José Alvarado and Seranthony Dominguez, who (barely) managed to get the job done.

In the bottom of the ninth, though, with Zach Eflin pitching and two out, the Cards rallied with two hits before Tommy Edman hit a high foul ball to Edmundo Sosa, in to play third after pinch-running for Bohm. It was a long, long run for Sosa, but he grabbed it, and the game was over. Phils take the game and the series, 2-0! Let the celebration begin! Next game: 1:07 on Tuesday afternoon, against the Braves in Atlanta.

Meantime, in Chester, the Union were playing at home against Toronto FC. Union midfielder Dániel Gazdag scored three and a half minutes into the game, which was sort of a must-win: Our team hadn’t lost at home all season, and they were coming off a dreadful 4-0 away loss to Charlotte in their most recent match. Never fear; Mikael Uhre put in a beautiful shot at the 42nd minute, and it was 2-0 Union at the half.

In the second half, at the 60-minute mark, the ref called a dubious hand ball on Toronto in the box. Gazdag put in the penalty shot, then scored again from the field two minutes later for a hat trick. Final score: 4-0 Union. And the team set a new Major League Soccer record: fewest goals given up in a season. Woo-hoo!

Time for the Eagles vs. the Cardinals — the ones in Arizona. Jalen Hurts scored a rushing touchdown on the Birds’ first possession, and C.J. Gardner-Johnson intercepted Cards QB Kyler Murray on his first drive. Hurts rushed in for a second TD in the second quarter; Dallas Goedert and A.J. Brown were having massive games early. But the Cards came back with a TD and field goal of their own. Birds up 14-10 at the half.

Eagles kicker Cameron Dicker, in for injured Jake Elliott, landed a field goal in the third quarter for a 17-10 lead. The Cards countered with a touchdown in the fourth: tied again! Dicker the Kicker made another field goal with under two minutes left in the game. Alas, the Eagles defense couldn’t make a single stop on the ensuing Cardinals drive. When Eagles games are close like this, we head into the kitchen and frantically clean. Miraculously, their kicker, Matt Ammendola (also a replacement, for injured Matt Prater), missed his last-second field-goal attempt, and the Birds won, 20-17. It wasn’t pretty, but the Eagles remain an undefeated 5-0. On his way into the tunnel, coach Nick Sirianni stopped to thank the Eagles fans in the St. Louis stands; local kid Jake Tapper tweeted pics of dead red birds. What a win! What a weekend! Kitchen lookin’ good! —Sandy Hingston