Plus, a private security force in Fishtown, Wharton-backed study says the USA is now the fourth best country in the world. And more of what the city is talking about today. 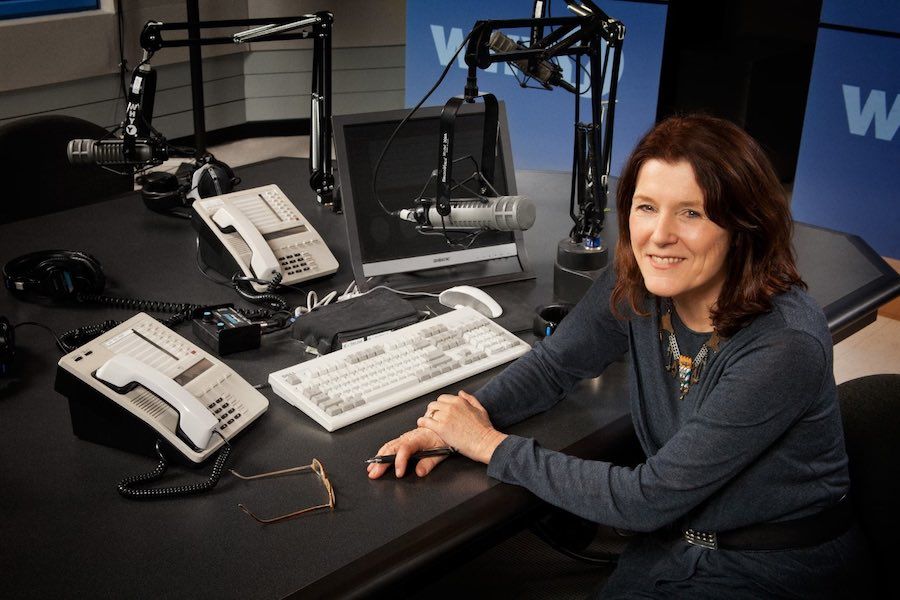 For public radio listeners in Philadelphia, Radio Times is an institution.

Every morning from 10 a.m. to 11 a.m., Radio Times host Marty Moss-Coane (or, more recently, one of her cohorts once Moss-Coane began cutting back hours in the last few years) interviews a wide range of guests, ranging from the fascinating (see: Toni Morrison, Madeleine Albright, Salman Rushdie, and Maurice Sendak) to the downright banal-in-that-public-radio way. She takes calls from the listeners. She’s been at it for 35 years. But no more.

Moss-Coane has announced she’s no longer going to do Radio Times, effective in mid-November, and the show will end with Moss-Coane’s departure. WHYY management hasn’t announced a replacement for Radio Times, but Moss-Coane will still show her face at the station with a new weekly show that will be far less taxing.

“I feel divided, and I knew I would, in part because I still love doing this show,” Moss-Coane told a WHYY reporter. “But after 35 years, I know that I am tired. Also, in my 70s. I don’t mind admitting that. I’m at a point in my life and career where I just need to step back. I need to get off the merry-go-round of the daily grind of a daily show.”

As she told us in a 2014 interview, which seems like it happened a century ago, Moss-Coane grew up in Massachusetts and rural Delaware and landed in West Philadelphia in 1969 after dropping out of George Washington University.

[Ed. Note: We’ve corrected the above to reflect Moss-Coane’s continued involvement with WHYY.]

The remnants of Hurricane Ian reach us starting tonight. Based on 6ABC’s forecast, it doesn’t sound like we have too much to worry about. And Lord knows we need the rain. Our thoughts and prayers are with the people of Florida and other areas devastated by the storm.

USA Moves From 6th Best Country in the World to 4th. Thank Wharton.

Though some would raise their eyebrows at this conclusion based on the state of affairs in the country, the United States is now the fourth best country in the world, according to a new ranking in U.S. News and World Report. That’s up from sixth place in 2021. This year, we’re bested (from first through third) by Switzerland, Germany and Canada. But we top (from fifth through tenth) Sweden, Japan, Australia, the United Kingdom, France, and Denmark.

If you’re wondering how in the hell they come up with these things, ask the brainiacs at Wharton. The school was pivotal in the analysis.

“In general, countries do not shift to any great degree from year to year,” said David Reibstein, professor of marketing at the Wharton School, in a statement. “But in 2021 and 2022, we witnessed more turmoil than in any of the previous seven years of this study, resulting in more change in how people viewed countries. Perhaps the greatest shakeup influencing the rankings this year is the conflict in Ukraine, the insecurity within Europe itself, the threat of possible nuclear confrontation and the total disruption of energy supplies.”

Russia is 36th on the list, which really has to piss off Israel, which is 37th.

When you’re fed up with police response time and drunk guys from local bars peeing on your doorstep, you can hire a private security firm for your neighborhood, which is exactly what Fishtown has done.

About that Strike at the Philadelphia Museum of Art

The United States Attorney in Philadelphia would like to remind you that carjacking can be charged as a federal crime, which is just what she did on Thursday.

From Evita to Delco Arts Week (which is apparently a thing) to Queertoberfest, something for everybody. Here’s a list of 81 things you can do this weekend. Just be sure to check for rain cancelations or postponements for any outdoor events.

And from the Choking-in-Despair Sports Desk …

Some people work for a living, ya know? So we didn’t get around to checking on the Phils until the 7th inning yesterday, with Rhys Hoskins up to bat and the team down 2-0. There were already two outs, courtesy of Jean Segura and Nick Maton. On the plus side, there were also two on — Matt Vierling and Kyle Schwarber — courtesy of two walks. Go Phils, right? A two-run deficit is nothing! We got this!

And that would end up as the final: 2-0 Cubs. They sweep the freaking series. Way to go, guys. Now on to D.C. for the Nats, for today’s day-night doubleheader that got rescheduled from Saturday because the whole East Coast is going to spend the weekend mired in dark clouds and gloom, just like Phillies fans.

The rest of the soggy weekend calendar: Temple travels to Memphis at noon on Saturday. The Union can lock up first place in the Eastern Conference with a win in Charlotte on Saturday at 5:30. Doug Pederson’s Jaguars come to the Linc on Sunday at one. Oh, and the Sixers visit the Nets on Monday night for their first preseason game. Hi, Ben Simmons! How’s that three-pointer coming?