The Pennsbury High grad, in town for the suddenly crazy PA primary, tried to get into surging GOP Senate candidate Kathy Barnette's Bucks rally on Saturday. It didn't go so well. 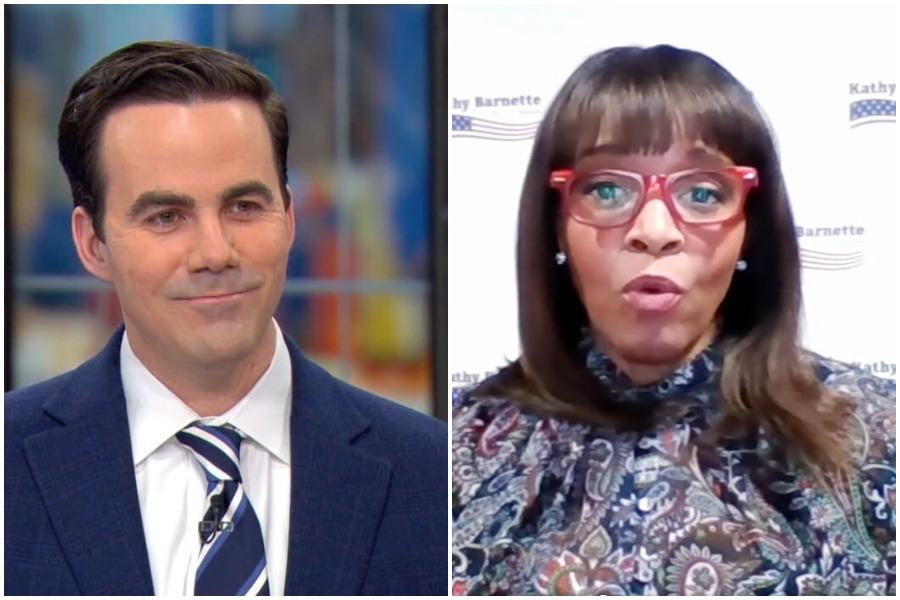 The last time we talked to Robert Costa, who grew up in Bucks County, he was the Washington Post‘s Donald Trump reporter and the just-named replacement for Gwen Ifill on PBS. Since then, he released a bombshell of a book with Bob Woodward and has co-authored investigative reports about texts between Ginni Thomas and Mark Meadows and about Trump’s phone calls on the day of the Capitol riots. Now, he’s the chief election and campaign correspondent for CBS News. We caught up with him right after his unsuccessful attempt to get into the final campaign rally for Republican United States Senate candidate Kathy Barnette, the Montgomery County-based opponent of Dr. Oz and Dave McCormick in Tuesday’s Pennsylvania primary.

Welcome back to the Philly area. I heard you had quite the interesting weekend trying to cover Kathy Barnette’s run in the Pennsylvania primary. What can you tell us about that?
On Saturday afternoon, I arrived at a Kathy Barnette rally in Warminster and ran into a few colleagues in the press who said they weren’t being let in. And I thought, What are you talking about?! This was a publicly listed event on the Kathy Barnette website, her final campaign rally. I thought they were joking at first. Nothing like that had ever happened to me in more than a decade covering politics.

So I started to walk up to the event space, and a security guard said, “Hold up, hold up. Stop. Don’t go any further.” And I said, “What’s the deal? Who are you?” They wouldn’t identify themselves. … I didn’t know if they were volunteers or security guards. … And it is odd to me that [her campaign] did not offer any explanation for why this event was closed to the press.

Well, Kathy Barnette seems to have a lot of support from the far right, who aren’t fans of the press. So I imagine her people figured they had nothing to gain from letting you in.
I don’t ever like to read anybody’s mind. I can’t guess what they are thinking. But it’s imperative for our audience across the country and in Pennsylvania to at least know what candidates for public office are saying. There’s a responsibility for the press to cover all candidates fairly and aggressively, and it’s the job of candidates to be as forthcoming as possible about how they will use their power, if elected.

Everybody has been talking about Dr. Oz, who, of course, is a celebrity and got the endorsement of Donald Trump. Many of us in the Philadelphia area didn’t really pay attention to Kathy Barnette until the last couple of weeks. When did you first hear her name?
I first started tracking Kathy Barnette in February, when she started getting a bit of traction and made a splash in some state GOP meetings. And one of the reasons I tracked her is because I wondered if a Trump endorsement would be enough to carry whoever got it. McCormick and Dr. Oz are both burdened by a perception that they are outsiders in Pennsylvania. So I wondered if somebody off-the-grid could emerge as a contender if, for whatever reason, Dr. Oz and McCormick aren’t able to convince Pennsylvania Republicans.

As I’ve been talking to people in the Philadelphia area recently about Kathy Barnette, it is apparent that she is a mystery to many. What do you know about her?
It’s evident that her Twitter account and her appearances on radio and in podcasts and in public speeches have included a litany of inflammatory remarks. She’s mostly denied and deflected when asked about those things. She hasn’t addressed some things that are anti-Muslim in nature and some homophobic comments made on some of these accounts. And all of that activity raises serious questions about somebody seeking a U.S. Senate seat.

You grew up in Bucks County, so I’d love to know if it surprises you that some of those arrested in the Capitol riots are from there. Early on in the Capitol arrests, Pennsylvania actually had more arrests than any other state did, and most of those arrests were in Bucks.
It doesn’t surprise me. There is a strong group in Bucks County of highly active anti-establishment Republicans. … These are people who recoil at the moderate wing of the Bucks County Republicans that has been dominant for decades.

I can’t imagine what it was like covering Donald Trump day-in and day-out, as you did for the Washington Post when he was in the Oval. Do you miss it?
We’re still covering the Trump movement in American politics. Kathy Barnette, Dr. Oz and David McCormick, all of them are embracing if not the Trump movement, the Trump coalition. This is a highly unusual situation in American history. So often, if a president loses, they all but disappear. Can you imagine if Jimmy Carter didn’t go back home after losing in 1980, if George H.W. Bush didn’t go back to Texas in 1993? It’s almost hard to imagine. Donald Trump has not retreated in any way. He remains deeply influential.

Is the Pennsylvania primary the one to watch on Tuesday?
It’s going to reveal a lot about where the country is. … It’s a fascinating time in the churning waters of American politics, and Pennsylvania is right there as the story.

To what do you credit Barnette’s surge in the polls?
Kathy Barnette’s message on abortion has resonated with voters on recent days. … Her personal story about abortion and her views on abortion with the larger debate going on in the country and lingering concerns about Dr. Oz and Dave McCormick have become a perfect way for Kathy Barnette to get another look.

If not for the Supreme Court abortion leak, would she even be a part of the conversation?
Hard to say but the leak has made abortion not just a hot topic but perhaps the topic in the Senate race and has enabled Kathy Barnette to talk about her biography to many Republican voters.

So I know you are here for the Pennsylvania primary. Will we see much of you after that?
No doubt about it. Pennsylvania is a place I will keep coming back to, not only because I prefer the food here, but I do believe the state is the perfect terrain for a reporter in 2022 and also 2024.

Ed Note: The Kathy Barnette campaign did not immediately respond to a request for comment on this story.