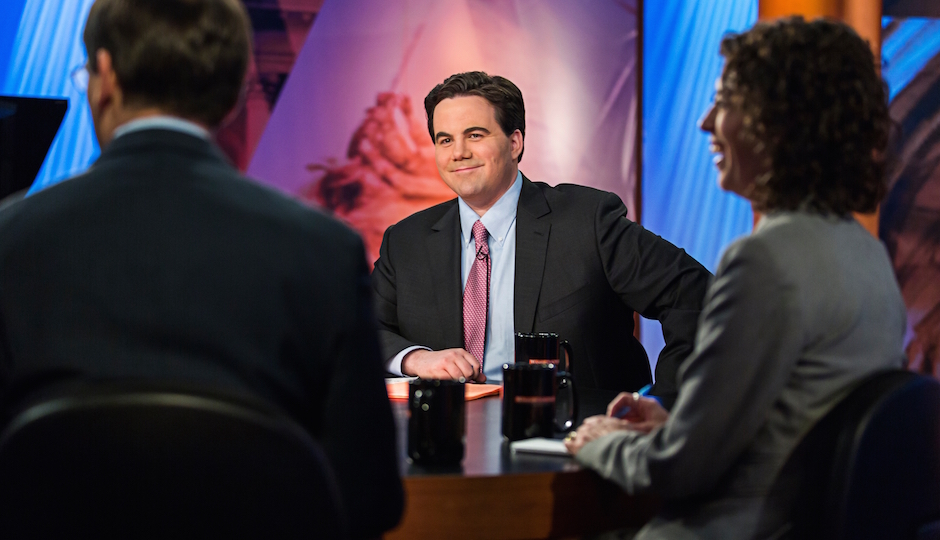 Robert Costa‘s trajectory has been nothing if not impressive. At just 31, he’s a national political reporter for the Washington Post who has interviewed Donald Trump many times. (He’s the guy Trump called to say that the health care bill was dead.) And less than two weeks ago, he was named Gwen Ifill’s replacement on Washington Week on PBS. We caught up with Costa to find out how he got there.

I grew up in… Yardley, in Lower Bucks County. I went to Pennsbury High, class of 2004. I did whatever kids in Bucks County did growing up: soccer, baseball, hiked the trails near the Delaware. And I still go back all the time.

I learned to write… from my teachers at Pennsbury and reading a lot of books, and I used to devour the Economist, Inquirer, Philly Mag, and the Bucks County Courier-Times. I wrote for the school newspaper and then I was a stringer for the Courier-Times.

Writing is like… playing a sport or an instrument. You can pick up skills. You don’t have to be totally natural.

My biggest get as journalist has been… President Trump. It’s an easy answer. I’ve had the opportunity to interview him extensively. He’s always unpredictable and somewhat wild as a subject. You never know what he’s going to do or say.

I knew that Trump was going to win when… I was in Alabama in the summer of 2015, a rally at a college football stadium. It was like a rock concert. The crowd was out of control. Raucous. It was populist, nationalist, celebrity. It was, it was, it was… everything. As I stood there in the press pen at this hot football field, I thought that this guy, a former reality TV star, if he had this much star power, he would probably win.

When I found out I got the PBS gig… I was humbled and thrilled. No one can follow Gwen Ifill. All I can do is follow her example and be inspired by her legacy. I grew up watching Washington Week, and it’s a show I always wanted to host. Reporters — and only reporters — sitting around a table. No pundits. No strategists.

My worst subject in high school was… chemistry. But I struggled in journalism class as well my junior year. It was a good lesson to me that I didn’t know everything.

My parents are always telling me… to be professional and stay steady and remember important things like family, friends and faith. They still live in Bucks County, and I talk to them all the time. They are non-political people.

The best movie or TV show about journalism… recently has got to be Spotlight, and one of the stars is Marty Baron, who is now my editor at Washington Post, but growing up, All the President’s Men. And now I actually have the chance to work alongside Bob Woodward. We got to interview Trump during the campaign together and write a front page story.

My favorite Philly sports team is… still the 1993 Phillies. They lost to the Blue Jays, but we all know that rough-and-tumble group. I actually still collect memorabilia from that team.

My day usually begins at… 5:30 a.m. I wake up, shower, shave, brush my teeth, read the papers, maybe do Morning Joe. And then I head to my source breakfast and then to the newsroom. And it ends around 8 or 9, unless I’m doing the Brian Williams show or another TV show.

My relationship status is… single but dating. I’m 31, so, you know…

People who say that print is dead… are wrong. People pay attention to what’s on the front page of the Washington Post, Inquirer, and New York Times. Print matters because the judgment that goes into the newspaper, the layout and headlines and what it puts on page one, matters to people of all stripes. It’s not dead. But I will acknowledge that it’s on its way out.

For my next vacation, I hope to go to … the Jersey Shore. My favorite spots have often been in Long Beach Island, but I’ll probably wind up going to Ocean City this summer.

The hardest part about my job is… time management. In between juggling PBS and the Washington Post and appearances on NBC and source meetings and breaking news and social media, you really have to learn to focus and not be distracted and leave time to take a walk and get a bite to eat.

The furthest I have lived from Philly is… outside of London. In 1998, my dad got transferred there as a pharma lawyer for Bristol-Myers Squibb, and so we moved there. We came back to Yardley for high school and after going to Notre Dame for undergrad, I went to grad school at the University of Cambridge. I’ve been in England a lot.

The biggest difference between D.C. and Philly is… that D.C. has a lot of great ethnic and international food, but it doesn’t have normal Italian restaurants where you can just go get pizza or eggplant parm or tomato pie. I miss red sauce joints.

The best part of my job is… seeing the politicians and history up close and writing the first draft of history. It’s an amazing experience to be a national political reporter, to see American democracy at its worst and best, to see history be made in front of you.

If you’re pouring me a drink, make it a… Diet Coke or seltzer water. That’s pretty much what I run on.

The first concert I ever went to was… the Dave Matthews Band in Camden at whatever that place was called at the time. The last concert was in December, Phish at Madison Square Garden, the New Year’s Eve run. I saw three of the shows. I maneuvered so I could be on Morning Joe those days so that NBC would pay for my hotel room.

When people attack me for what I write… I ignore it. I don’t engage with negative stuff. Politics is a tough subject, and not everyone is going to love what you write, especially in the Trump era. So you better have thick skin. If you’re in the public eye as a reporter, it’s not a love fest.

Fox News is… in a moment of upheaval.

Hillary Clinton’s biggest mistake was… that she and the other Democrats underestimated Trump’s appeal to working-class voters.

If I wasn’t doing this, I would be… writing reviews of rock bands for Rolling Stone.

One book everyone should read is… A Prayer for the City by Buzz Bissinger about Mayor Ed Rendell and how he interacted with all the different constituencies in Philadelphia and really tried to pull Philadelphia back. It’s one of the most underrated books, so vivid and muscular in its language.

When people confuse me with Bob Costas… I smile and shrug. It’s something I’ve dealt with my whole life. I go with “Robert” because I always try to avoid confusion with the great Bob Costas.