The flawed plan, which aims to increase police spending as a way to "reimagine policing in Philadelphia to ensure public safety," is a regurgitation of failed ideas and would only exacerbate the problem. 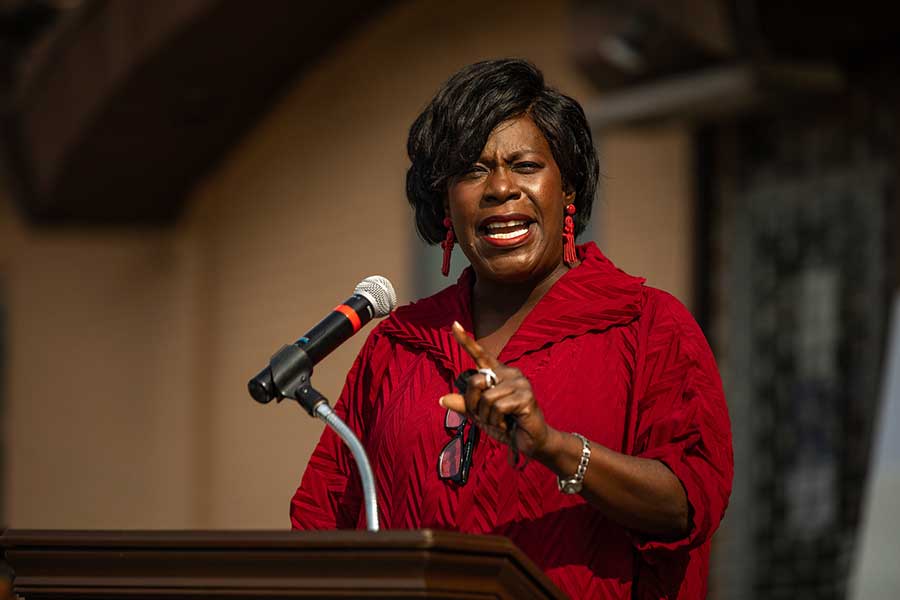 Photograph by Jared Piper for PHLCouncil

As we get closer to next year’s open mayoral primary, it’s no surprise to see some Democratic hopefuls jockeying for position ahead of the city’s budget process. Take Councilmember Cherelle Parker, who’s staking her claim by proposing a new plan to increase police spending to address how “gun violence makes every corner of our city feel unsafe.”

“This Wednesday, I will introduce a comprehensive plan that will focus the city’s resources, funds, and energy on much-needed community policing measures,” wrote Parker, the majority leader on City Council, in an op-ed for the Inquirer. “I am calling for 300 additional on-the-ground beat officers and bike patrol officers in our neighborhoods, particularly around our city’s commercial corridors, schools, recreation centers, and libraries, to keep Philadelphians safe. My hope is that these neighborhood officers will grow and nurture relationships with the community, rebuilding trust.”

Parker argues that such a plan will “reimagine policing in Philadelphia to ensure public safety,” and that even though it will increase spending, “The costs are worth it when we are talking about saving lives.”

But we’ve heard this broken record every year the police seek more money from taxpayers: Crime is increasing, and we’re told to give the force more money to solve the problem. They get more money, crime doesn’t go down — and then they again ask for more money to increase their efforts to solve a problem that only continues to skyrocket.

Parker’s “plan” isn’t comprehensive or new; it’s simply a repackaging of a flawed narrative — and it’s wasteful and regressive. To hear it from her, the Philadelphia police department’s $727 million budget — the largest line item in city’s spending plan — isn’t enough for them to do their jobs effectively. Her call for more community police implies that such efforts haven’t already been proposed and that crime will finally be addressed once more millions are poured into this fiscal black hole.

The problem with this approach is that the police department was already expected to improve community relations with the $700 million-plus they currently get. If they weren’t already using that funding to be “guardians, and not warriors,” then what were they using it for? It’s concerning that Parker is calling to increase police funding as her City Council colleagues are looking into the abuse of police disability benefits. More accountability measures, such as those proposed by City Controller Rebecca Rhynhart, should be implemented to better track how the police are spending the millions they already receive, rather than everyone assuming it’s all money well spent.

Money in the city budget is determined by tax revenue, which has been unpredictable of late. I’m curious to know if Parker is counting on more revenue to fund this boost or if her plan would require decreasing spending elsewhere. In 2020, the city made massive cuts to the arts, parks and recreation, innovation, and other essential cultural departments to avoid a big hit to police spending. In the city’s recent history, police budgets have never taken a major reduction — they either increase or stay flat.

And let’s get real here: More policing doesn’t actually solve gun violence. The mass incarceration of mostly impoverished and marginalized individuals will never address the root causes that have led to the crisis. It’s preposterous that there’s a plan to increase police funding while several local gun violence prevention organizations report that they have yet to receive the money they were promised by the city.

Perhaps the police funding hike Parker proposes should actually be directed at the root causes of gun violence, rather than exacerbating the problem altogether. Much of her current plan follows the broken windows theory that addresses quality-of-life issues that contribute to violence (such as “improving road safety by clearing abandoned cars and impounding ATVs, dirt bikes, and other illegal street vehicles; improving street lighting; installing more police cameras; and regularly cleaning the streets and sidewalks in our neighborhoods and commercial corridors”). But again, none of these actions will do anything to tackle the root causes of gun violence (such as poverty, poor public education, and unemployment).

I don’t know if this is a blatant grab for a future FOP endorsement or just bad optics in general, but I hope the Kenney administration and City Councilmembers collectively dismiss Parker’s plan. We already know that more police funding won’t reduce crime. It’s long past time for our elected officials to actually produce something new, bold and better on this front — such as addressing the excessive police funding we already have.