"When I saw how high the numbers were, I had to call our stats department to make sure they were right," a Philadelphia Police Department representative told us. 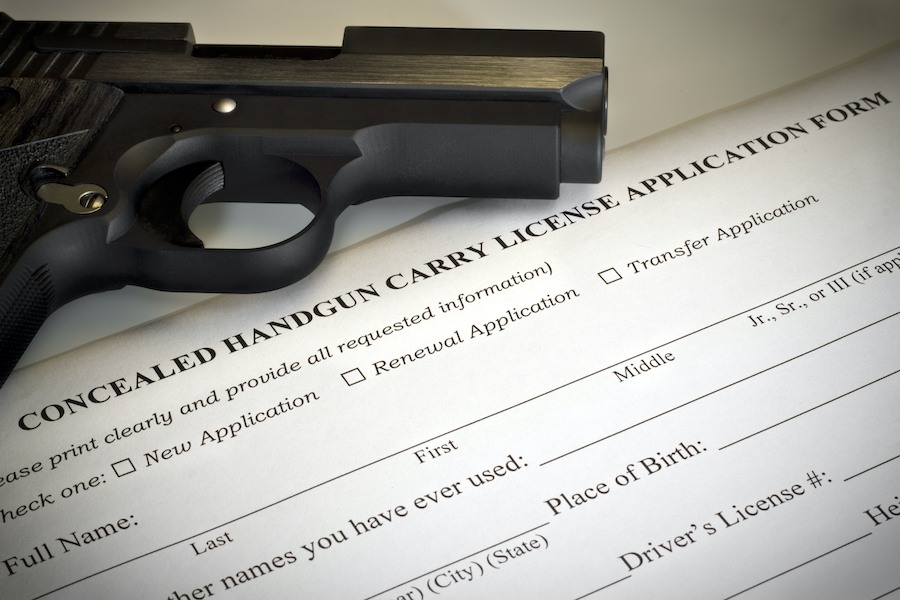 An example of a license-to-carry application. The number of such applications has risen dramatically in Philadelphia in the past year. (Getty Images)

It didn’t surprise me a bit to learn that license-to-carry applications in Philadelphia have risen over the past year. First, you have the constant reports of shootings, carjackings and other violent crimes in the city. Second, the Philadelphia Police Department made it dramatically easier to apply for a license to carry, starting in January 2021. But I wasn’t exactly ready for just how big this increase has been. And neither was the Philadelphia Police Department, it seems.

“When I saw how high the numbers were, I had to call our stats department to make sure they were right,” police department spokesperson Jasmine Reilly told me after I requested the data.

In other words, license-to-carry applications more than sextupled last year. And in January of this year, the number of applications continued its upward trajectory. (The Pennsylvania State Police publish an annual report showing the number of licenses issued in the counties surrounding Philadelphia as well as in the rest of the state, but a spokesperson for PSP says that data isn’t yet available for 2021.)

Wake Forest University sociologist David Yamane, author of the 2021 book Concealed Carry Revolution, says there’s a well-established trend over the past few decades of gun culture in America shifting from guns for sport, like hunting and target shooting, to guns for personal defense. “This trend has accelerated during the pandemic and other events of the last two years,” he says, adding that licenses to carry surged right along with gun ownership. “But this increase in Philadelphia is exceptional.”

Yamane tells me he’s unaware of systematic nationwide license-to-carry data at a city level but says he’s seen reports suggesting that the number of license applications nationally increased by around 10 percent from 2020 to 2021. “So a sixfold increase in a single year is quite dramatic indeed,” he says. “As more people take part in some social practice, it appears more normal to other people. So there may be some ‘contagion’ effect as license applications spread through social networks.”

The violent crime increase in Philadelphia has, no doubt, contributed to the surge in applications. And starting in 2021, the Philadelphia Police Department implemented a new application process. Previously, you had to complete part of the application in-person at the Gun Permit Unit on East Erie Avenue and get fingerprinted. But in January 2021, police removed the fingerprinting requirement (no other counties in Pennsylvania have one, according to Reilly) and moved the application process entirely online. Hassle free. The process to legally buy a gun in Philadelphia remains the same as it had been.

In Philadelphia and throughout Pennsylvania, you don’t need any kind of permit or license to keep a gun in your home or place of business. But if you want to carry a gun under your jacket or in your purse, i.e., hidden from view — that’s where the license to carry comes in.

When applying, applicants answer a bunch of questions, provide references, and submit to a background check. And you’re either approved, in which case you go to the Gun Permit Unit to pick up your license, or you’re denied.

The number of applications denied in Philadelphia from 2017 through 2020 averaged 17.5 percent. In 2021, just under 10 percent of license-to-carry applicants were denied.

Of course, just because you’re denied doesn’t mean you’re not carrying, and carrying without a license is generally a first-degree misdemeanor, punishable by up to five years in prison. But that charge can be upgraded to a felony depending on the circumstances.

“I have a pistol on me at all times,” one local resident who says he was denied a carry license told me. “You’ve got to be crazy not to, the way things are going.”

Pennsylvania law says you can be denied a license to carry if you’re judged to be an “individual whose character and reputation is such that the individual would be likely to act in a manner dangerous to public safety.” There’s a lot of subjectivity in there, and an appeals process does exist for those who are denied.

The gun-carrying resident I spoke with didn’t bother appealing. He has a history of minor drug violations, a DUI, and various summary and misdemeanor offenses and says he’s more concerned about his personal safety than whether the police say he’s allowed to carry a gun.

“It’s not like they are going to protect me,” he argues.

Whether all of this newfound gun-toting is a good thing comes down to whom you ask. Gun control advocates think it’s terrible and point to studies that show more guns don’t keep people safer. Law-abiding gun owners roll their eyes at such studies and inevitably turn to the What are you going to do when you’re in line at Wawa and somebody pulls out a gun? line of questioning. (Turns out that “Uh, hand over my meatball Shorti?” doesn’t elicit chuckles from this cohort.)

But Yamane explains it’s just not that simple.

“Don’t believe anybody who tells you carrying a gun definitely makes you safer or definitely doesn’t,” he says. “The data is incredibly complex. What we do know is that we’ve seen a surge in ‘non-traditional’ gun owners, like women, carrying guns. And we’re also seeing, anecdotally, instances here and there of citizens using concealed weapons to defend themselves, like that carjacking in Philadelphia. People look at stories like that, and it leads them to believe that more people carrying guns will be a deterrent for crime. But we just don’t have that evidence.”

One thing’s for sure: Anybody carrying a gun needs to know how to use it safely. Yamane points out that while some states require you to pass a written test or demonstrate proper gun-safety techniques at the range to obtain a carry license, Pennsylvania doesn’t. And I know at least two acquaintances who’ve started to carry in the past two years but rarely, if ever, visit a range for practice.

“It’s scary,” says Bart Breslow, owner of Bucks County’s Survival Trail gun store and training center, which began offering mother-daughter and women-only gun classes when it opened in July. “Carrying a gun requires time for education, not just for your safety, but for the sake of everyone around you.”