The West Philly-born-and-raised comedian is a particularly hot topic right now thanks to her hit ABC sitcom. What’s the secret to her success? 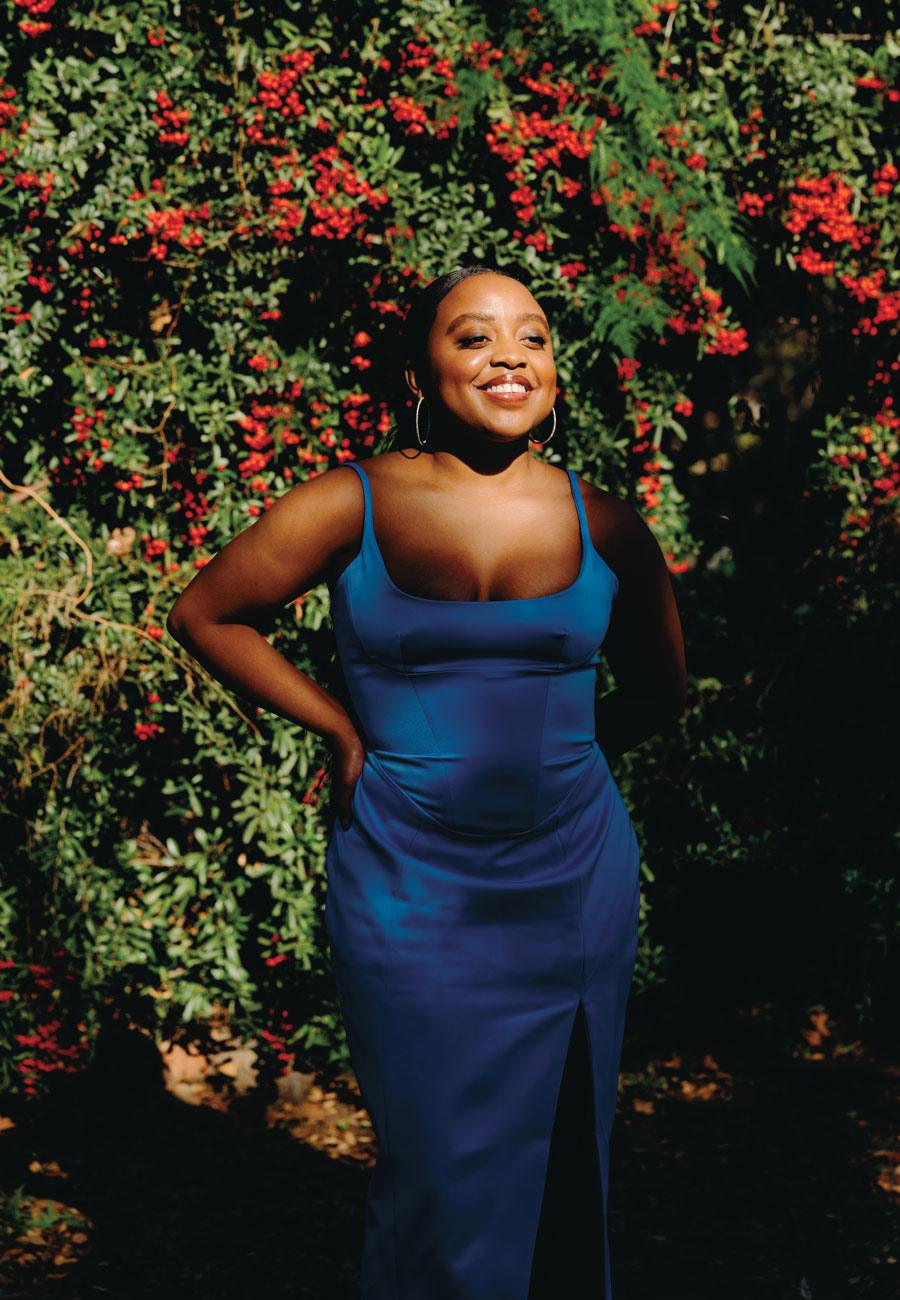 Quinta Brunson, the creator and star of Abbott Elementary  / Photograph by Rozette Rago

Quinta Brunson, 32, went to Philly public schools, and her mom taught kindergarten at one for decades. All of that experience is condensed into Abbott Elementary, the ABC sitcom that critics have compared to The Office. (Not too shabby!) Here, she talks about the real Philly people who inspired Abbott’s characters, her Peloton aversion, and why she’s so shocked that her mom is proud of her.

Good morning, Quinta. You sound tired. I hope I didn’t get you up too early.
It’s not even early. It’s nine o’clock here. But I’ve been sleeping in a lot lately because I can, which is me not having kids yet. Last week, I had to wake up at 3 a.m. my time for a Good Morning America interview.

Well, everybody wants to talk to you, which is what happens when you have such a huge hit on your hands. Some major television critics have even likened Abbott Elementary to The Office. Do you read the reviews?
I do. I try not to put too much weight into them, but I do read them, and I was so happy when I saw they were all positive. But more important to me was what the audiences at home and teachers think about the show.

In my home, this is one of the few shows that we — “we” includes my daughter and son, both teens, and my wife, who’s a teacher — all watch together and enjoy.
I’ve heard that a lot, and that really does it for me. Families watching it together — I felt like that kind of TV was missing. That’s how I grew up: sitting around with my parents, watching comedies on TV.

So who doesn’t like this show?
For the most part, it’s been extremely positive. But I have seen critiques of our school principal from other principals, upset at the portrayal of her as “incompetent,” especially since she’s a woman and Black. We don’t see her as incompetent. But that’s the perception of some audience members so far.

She doesn’t come off as incompetent to me — more hilariously self-absorbed and tone-deaf.
And it’s a sitcom. Having a sitcom without flawed characters would be quite boring, and I think she’s entering the ranks of other hilarious not-so-great-people characters. It’s a fun trope.

But this is 2022. Did you not consider that some people would be offended when you made the Black woman in charge seem maybe unqualified?
No. I didn’t. I’ve met a principal like that. I’m not going to say who or at what school, but when you have somebody like that, it’s hard for the people dealing with them. It’s a headache. She’s Michael Scott in The Office. A pain in the butt. There are three Black women in the show who find three different ways to be funny. And if some people want to be upset about her, there are two other Black women they can enjoy: Janine, my character, and Barbara, played by the fabulous Sheryl Lee Ralph, who is largely based on my mother. Above all, I’m not interested in making characters that uphold respectability politics. We have a rich world, and if people choose to see the worst, that’s not my problem. That’s a personal problem.

I’ve also seen people say that while it’s great the show is pointing out endemic problems — especially underfunding — in the Philadelphia public-school system, you and the other producers should be doing something to actually fix the problem.
We kicked off our season by getting a broad array of supplies to schools in the district. When we first started out, we reached out to the school district about donating money, but it’s surprisingly hard to sponsor a couple of schools. It becomes about which schools? There is so much paperwork. The easiest route, at least this time around, was to donate supplies. But we want to do more, and I’ve been talking a lot with City Councilmembers Helen Gym and Jamie Gauthier. It’s an ongoing conversation.

Back in 2018, you did an interview with Philly Mag all about loving your job. In those days, you were more of an internet star. Do you still love your job now that you’re in the business of network TV?
I do, but it’s a lot more stressful. I used to be responsible for me. Now I’m responsible, as creator and executive producer, for 200 people. All these people have jobs under me. And they want to keep those jobs. I have to make the whole ship sail. I’m trying to make the best decisions.

The pilot for Abbott Elementary debuted in December. Did I sleep through a seismic shift in the world of television where shows now come out in December?
It’s a new strategy. The idea was, in a world where people aren’t watching networks as much, you’ve got to create buzz. They were doing the live-studio-audience versions of Diff’rent Strokes and The Facts of Life in December, and they put our pilot on right after that, which gave us a very hefty audience. Then that episode was available on Hulu over the holidays, and the buzz was building. People were getting excited. And then episode two hit. Our ratings for that were higher than for the premiere. That’s hard to pull off these days. 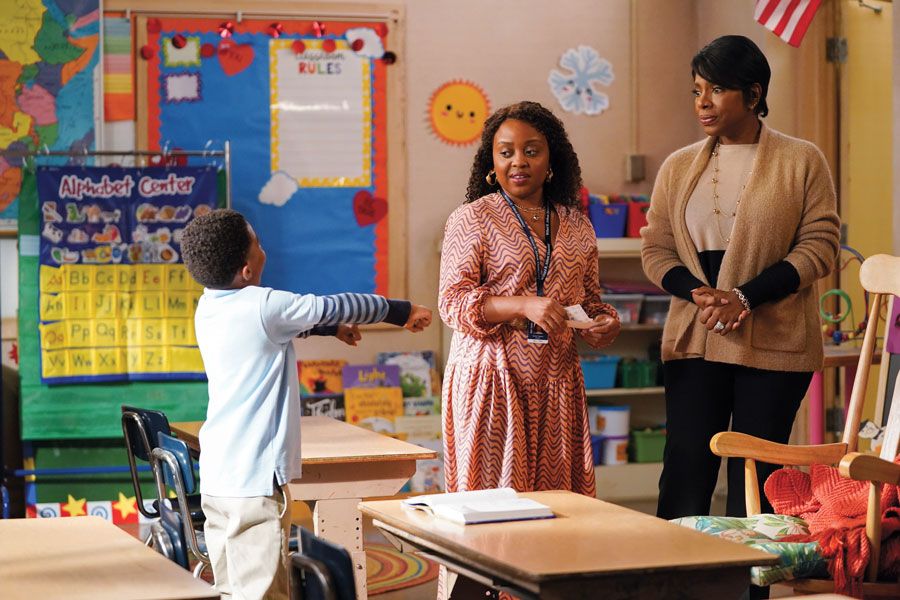 The season was filmed in 2021, and yet COVID is absent as a topic. Why?
The show was developed before COVID. And then when it came time to make it … I have a personal thing: If something’s just not funny, I don’t want it in the show. COVID feels like one of those things. Not funny. It wasn’t for our show to handle. Didn’t feel like it was our place to take that on.

Speaking of the pandemic, did you have any fun pandemic projects?
I got super into board games and video games. Dusted off the Scrabble and dominoes. I was playing Super Mario Party like it was nobody’s business. I also got into working out, which I had never really done before. Started­ walking, and bought a cheap exercise bike I saw on Amazon. I refused to get a Peloton. Everybody was getting a Peloton, and it was really getting on my nerves.

The influence of The Office is so clear in the show. Were you a huge fan, an early adopter?
Huge. Fan. But I wasn’t an early adopter. There was an episode that came on after the Super Bowl in 2009, and that’s the first one I saw. Everybody I knew had been talking about it forever, but I refused to watch it.

So what I’ve learned about you in this interview is that you shun things that are massively popular.
[Laughs] That’s how I operate. But once I saw that episode after the Super Bowl — it was the one where Dwight sets the office on fire — I became a superfan. And I became a big lover of workplace comedies.

You mentioned your mom earlier. Tell me about her influence on your workplace comedy.
I was in my mom’s kindergarten class — I don’t think they allow that anymore — and back in those days, she’d be teaching 60 kids in one day. That’s some insane Philadelphia school district shit. And I remained at her school through fifth grade. I would go to school with her early and sit with her until it was time for me to go to class, and I would be with her at school until she was done work. I saw so much. I saw her meeting with parents, principals. She was a huge inspiration for the show. And she had a really good friend in her school, this South Philly Italian lady who kept stopping by her class talking shit, so the character of Melissa Schemmenti is based on her. Jacob is based on my friend in New York, who is a public-school teacher. And Gregory is based on the few times I saw a Black male teacher in school. Such a unicorn.

What has your mom’s reaction to the show been?
[Laughs] She loves it, which is so … unusual. She’s not easily impressed. I was telling her about it the whole time and told her that the character of Barbara was based on her, and I was expecting her to have lots of critiques. She had none. I was in shock. She’s a very critical person. But instead, she’s cracking up and saying how proud she is of me. That’s the first time since I graduated high school that she said that. So if she’s saying she’s proud of me, she’s really proud of me.

Are there any men in your past who will recognize themselves in this character?
That is such a messy question. I’m just going to have to pass on that one.

Does he redeem himself by the end of the season?
Let me start by saying that your wife and daughter are not alone. So many people have issues with Tariq. I can’t say that he “redeems” himself, but by the end of the season, I can say you are not going to want him to leave. He winds up being a super-lovable sitcom character. He’s not like Roy in The Office. Roy was not a good guy. They wrote Roy in so you were happy to see him go. But I humanize Tariq as it goes on.

You dropped out of Temple and fled Philly for L.A. How did we lose a great talent like yours?
There was no outlet for me in Philadelphia. If you want to write for television, you move to L.A. Maybe New York. But I think about coming back all the time. I stayed at an Airbnb recently in Rittenhouse Square. It was always my dream to live there. I wish that could be my life. But it can’t. It doesn’t work with my work.

What’s the secret to your success with this show, other than it being, you know, funny?
This is a craft like any other profession. And what I kind of always tell people who want to do this is that they need to study television and film. One of the things that really made it work for me was that when I was at Temple, studying television and film, I also studied advertising — the real business of network TV. If you know how to make a show and sell a show, you are bulletproof.

So … Abbott Elementary season two?
I know ABC is really excited, but we don’t know anything for sure yet. It’s weird. The pilot came out in December, and the regular episodes started in January, and people have loved them. But that’s my newfound fear. We don’t finish until April 12th, so there’s a lot of show to still get through. Oh my God, I really hope people like it.

UPDATE: Abbott Elementary has been renewed for a second season.

Published as “On the Record: Quinta Brunson” in the March 2022 issue of Philadelphia magazine.