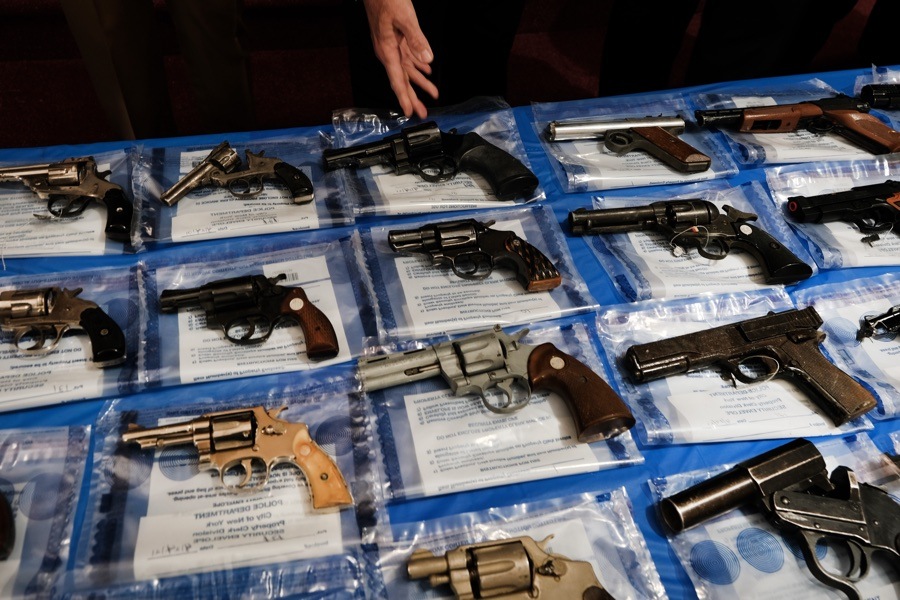 Are the weapons taken off the street through gun buyback programs helping the gun violence problem? (Photo by Spencer Platt/Getty Images)

With a month to go in 2021, Philadelphia has already hit 500 homicides. At an average of one homicide every 16 hours in the city, the grim rate now matches a record set in 1990. By the end of 2021, this year will likely be the deadliest in our city’s history.

There’s already been plenty of commentary and analysis on the institutional and budgetary causes of this epidemic. And now we’re getting the predictable wave of reactions and finger-pointing. At this point, perhaps the only way to address the problem is to finally acknowledge what isn’t working. So much of the conversation around combating gun violence in the city has been focused on funding and producing more solutions — but has anybody been evaluating the previous ones?

As I reflected on the tragic loss of innocent lives, including a Temple student who was killed not too far from where my younger brother lives on campus, I contemplated the previous actions of community leaders and politicians on confronting gun violence.

Gun buyback, which allows community members to voluntarily hand over their firearms, is intended to reduce the number of guns being sold/circulated on the street. It’s also leveraged as a way to reduce future prosecution, with individuals encouraged to sell back to authorities—with no questions asked—firearms they may have gotten illegally. In recent months, public figures have been touting how many guns they’ve gotten off the street through such programs.

Thank you to Philadelphians who turned in nearly 100 guns today at two gun buyback events in the city.
One of the buybacks was at St. Paul AME Church in S.W. Philadelphia. Thank you to Rev. M. Lloyd Guyton for his church. I was joined by Pa. State @RepReginaYoung
1/@PHLCouncil pic.twitter.com/JvM8ksFUj1

Come forward and help make our communities a safer place by turning in a gun. pic.twitter.com/SnMnjJruxc

Gun buybacks are essentially performative opportunities for politicians to flex their community-outreach muscles for the press. Holding a citywide event at which you ask the public to hand over deadly weapons sounds bold. Given the drama—look at all the guns on this table!—you might assume that change is imminent, that your elected official has cracked the Da Vinci code on gun violence. “No questions asked!” the fliers read. “Save a life!” they often emphasize. But is this working?

Research and common sense say “no.”

If you look carefully at the guns being confiscated, they aren’t the ones usually connected to homicides in Philly. Seriously, who’s running around shooting people with old-school hunting rifles? Studies have found that too many of these guns are ancient or broken and that gun buybacks overall cost taxpayers thousands of dollars. While it feels good to see one less gun in our communities, these aren’t the firearms responsible for our violence epidemic. The National Bureau of Economic Research has shown that buybacks aren’t particularly effective because of the massive volume of guns in our country. To make matters worse, there appears to be no form of measuring how effective they are in Philly.

Sadly, one in every 10 guns seized by police today is a “ghost gun” — a handmade firearm assembled from separate pieces. Such guns first grew popular a decade ago, when local governments began to ban assault-style weapons and firearm manufacturers started selling ghost gun components as a response to a federal loophole that allows for individual gun parts to be sold to the public without regulation, background checks or serial numbers. Although that “one out of 10” might seem low, it’s hard to find ghost guns, because they lack formal points of sale and general tracking — all of which makes them even more dangerous, because it means there are more guns on the street than we know about.

Since 2016, ghost gun sales have grown rapidly, and they’re increasingly connected to homicides. For example, nearly half of all shootings in Los Angeles are now being linked to ghost guns. Here at home, the number of ghost guns confiscated by Philly police during investigations skyrocketed to 436 through October of this year — more than all the homemade guns taken by the city in 2019 and 2020 combined.

Translation: Those serial-numbered rifles and quaint handguns being collected at buybacks aren’t the real threat. Ghost guns are.

Although the situation seems bleak, there has been some movement on addressing this. Last year, City Council passed a bill to ban ghost guns. In March, State Rep Amen Brown and Attorney General Josh Shapiro worked to get Eagle Arms, Pennsylvania’s largest gun-show promoter, to stop selling ghost gun kits at its shows. But such actions don’t change the fact that ghost guns are still highly accessible because they aren’t technically firearms.

“Right now, someone who is considered a prohibited purchaser can buy a ghost gun because it’s not considered a firearm under either our federal laws or our state laws,” Shapiro said in October. “I’ve been pushing the Biden administration and the [Bureau of Alcohol, Tobacco and Firearms] to change that. They’re working through the process.”

I would argue that this is where the real fight against gun violence should be headed — eradicating the actual source of the terror. If long rifles and dated shotguns aren’t on the rise, then why are we wasting our resources, time and energy confiscating them? It’s clear that the new threat is ghost guns, and people in power must rally behind a collective effort to increase the consequences for those found pushing these guns on the street and developing legislation that can stop them in their tracks.

If you get rid of these kits, you’ll reduce crime. Until that happens, we’ll just be going in circles.