Newtown’s Dana O’Neil gets the inside scoop on everything from Villanova’s wild 1985 Cinderella run to Allen Iverson’s mom’s plea to Georgetown coach John Thompson Jr. to take a chance on her kid. 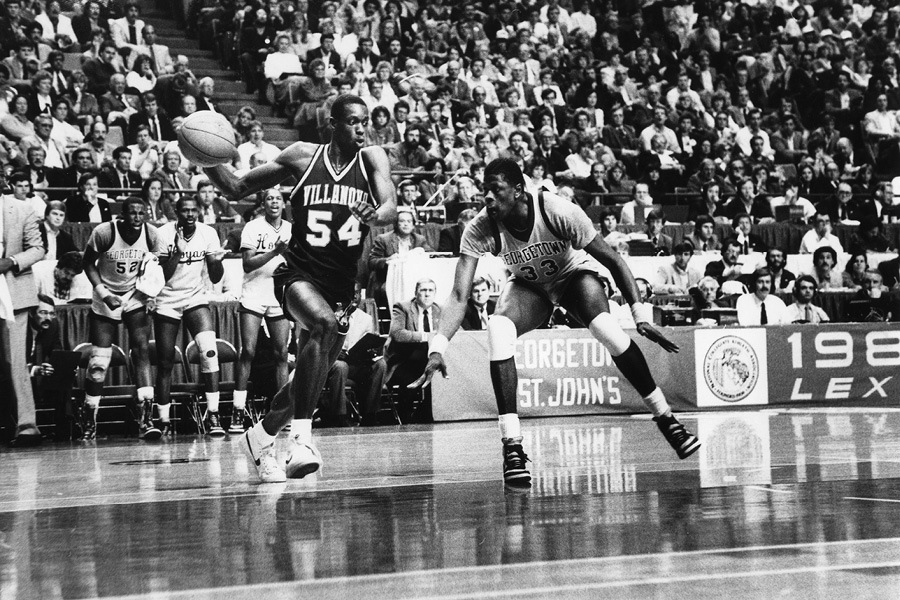 Just as college basketball season gets rolling, The Athletic sportswriter Dana O’Neil presents us with a new book, The Big East: Inside the Most Entertaining and Influential Conference in College Basketball History (Ballantine Books). It’s a retrospective look at how a scruffy bunch of East Coast schools, most without viable football programs, joined with a fledgling all-sports network known as ESPN to change the landscape of college sports. It’s stuffed with Philly-familiar names (Jay Wright, Rollie Massimino, Allen Iverson) as well as all-time greats including Georgetown’s Patrick Ewing and Syracuse’s Jim Boeheim. In one scene reminiscent of Joel Embiid’s recent fist-swing that nearly decapitated Lonzo Ball, Ewing throws a haymaker at Syracuse’s Pearl Washington, who’s later told by the Dome Ranger, the college’s mascot, “He didn’t touch you. He touched your aura.”

O’Neil’s account is anchored by the 60-plus interviews she conducted with coaches and players as well as by the intimacy of their relationships with one another, especially at the conference’s start. The coaches of the original six schools — Georgetown, St. John’s, Syracuse, Providence, Boston College and Connecticut — were wooed by Providence athletic director Dave Gavitt, a man of huge enthusiasms and stellar people skills who knew everybody and anybody and apparently could talk them into anything. The college basketball world’s attention had shifted, in the wake of a point-shaving scandal, away from New York City to the South, with the Atlantic Coast Conference flourishing while the East Coast declined. Kids who once would have happily signed on to play hoops in the Big Apple were heading to Durham, Winston-Salem and Chapel Hill. ESPN, meantime, was an upstart showing “scrap games” spurned by the three networks. The teams that would become the Big East needed that upstart, and it needed them.

Many of the rivalries the Big East made famous predated the league’s formation, as did relationships between the coaches, who seem to have thoroughly enjoyed the opportunity O’Neil offered for them to take sly digs at one another. And it turns out that the many huge games in the conference’s history — its tournaments eventually settled in at Madison Square Garden — are seared into the memories of the Big East’s players and coaches indelibly. Here are just a few of the highlights they shared with O’Neil and she shares with you. 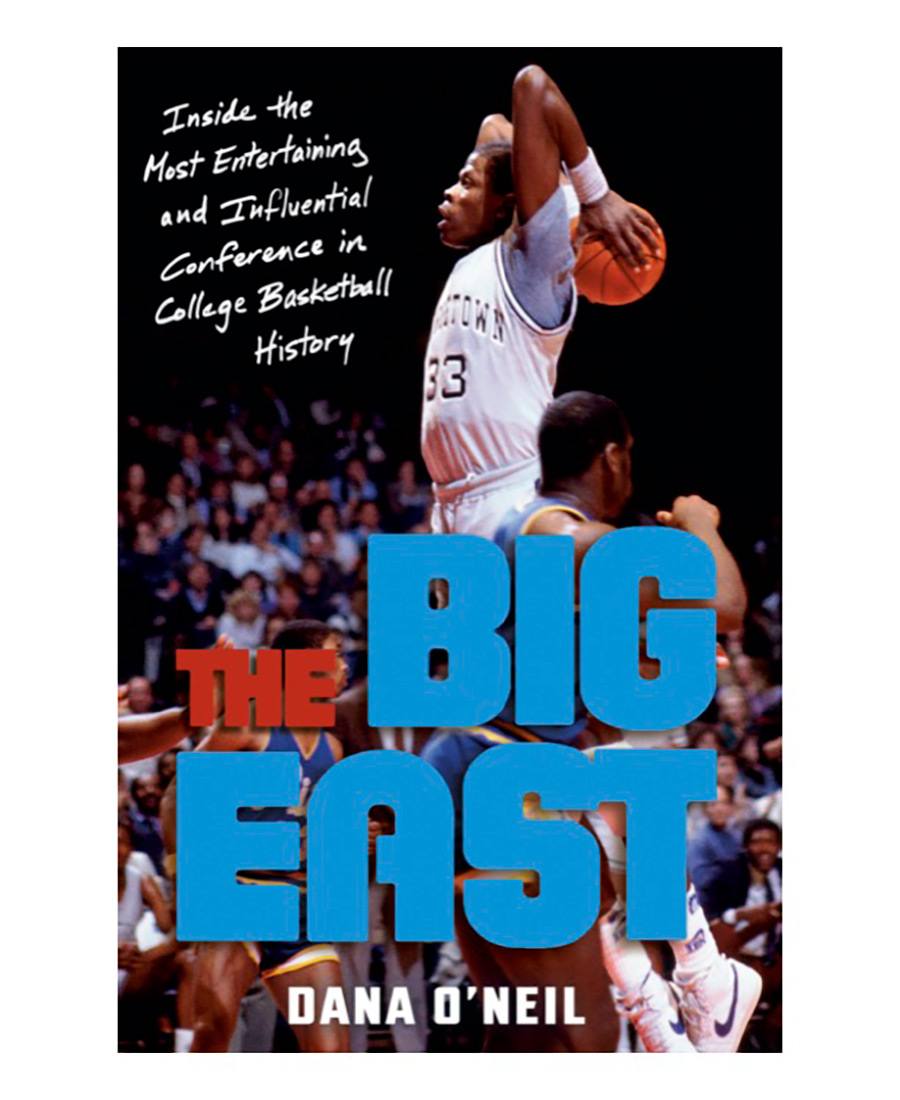 Georgetown, Where Are You?

Longtime Georgetown coach John Thompson Jr., under the guise of not wanting his teams unnecessarily distracted, made it a habit to park them in out-of-the-way hotels and resorts during tournaments — and jested at his habit by wearing a “Georgetown, Where Are You?” button during the 1982-’83 NCAA tourney. The Hoyas faced off against the Kentucky Wildcats in the finals that year; after Georgetown prevailed, 53-40, Wildcats coach Joe B. Hall had a manager measure the circumference of the baskets: “He couldn’t believe one of his teams got shut down that badly,” New York Daily News reporter Dick Weiss tells O’Neil.

Thompson also enforced a rule with his players that whenever they played in Madison Square Garden, they cleaned up after themselves post-game, gathering used tape and paper cups and litter from their bench. Knowing his team’s (undeserved) reputation for thuggishness, he made sure they always traveled in suits and ties, educated players on being Black in America, and went to pains to limit media access to his players: “He wanted people to hate him,” Post reporter Michael Wilbon tells O’Neil, “so they wouldn’t hate his kids.”

Gavitt held weekend getaways for all his coaches to encourage camaraderie, which turned into hours-long bitchfests at which those coaches “hurled accusations across the table, calling out dirty recruiting tactics, months-old complaints about bad calls, favoritism, and anything in between.” He always invited the conference’s supervisor of officials to speak, but “any attempts at civil discourse quickly devolved into screaming matches, the coaches recalling every bad whistle from the previous season,” O’Neil writes. Reports Jim Boeheim: “We’d spend four hours cursing, throwing every ref in the league out. At the end of one meeting, we were supposed to rate the top 10 refs. We wanted them all blackballed. And Dave would step in. ‘Okay. We’re keeping all of them.'”

In the early ’80s, when the NCAA voted to add the three-point shot to the college game, a preseason poll of coaches showed 65 percent were against the move. Rollie Massimino at Villanova instigated a Big Five letter-writing campaign against the addition, and Duke coach Mike Krzyzewski loudly objected to it as well. But (then)Providence coach Rick Pitino saw it as an opening for his underdog team, marking the three-point line on his gym floor and having team members practice the shot. They became so adept that a team that had only won three Big East games in a year racked up a 6-2 league record, beating Villanova, Georgetown and St. John’s by making and defending threes. In one 96-78 drubbing of Villanova, Providence player Delray Brooks sank eight of nine three-point attempts, while the entire Wildcat team went 0-for-six.

A Big East Tournament quarterfinal game in 2009 between Syracuse and Connecticut tipped off at 9:36 p.m. and ended — after six overtimes — at 1:22 a.m. “It lasted so long,” O’Neil notes, “that the Philly reporters who left after filing their game stories off the earlier Villanova game took the local NJ Transit train to Trenton, drove the 40 minutes from the station to their homes, and still saw the end of the game.” After Syracuse pulled away at the end to win, 127-117, UConn coach Jim Calhoun, a notorious bad loser, refused to say anything about the momentous bout. “People always ask me how I felt because it was historic,” Calhoun tells O’Neil. “That’s like being shot at Gettysburg and being happy about it. I got shot.”

This book, full of long-standing rivalries, unmatched moments in the lives of coaches and players, and juicy insider gossip, is, like the game of basketball, a ton of fun.