To write an honest portrayal of friendship in We Are Not Like Them, my co-author and I had to start telling each other the truth. 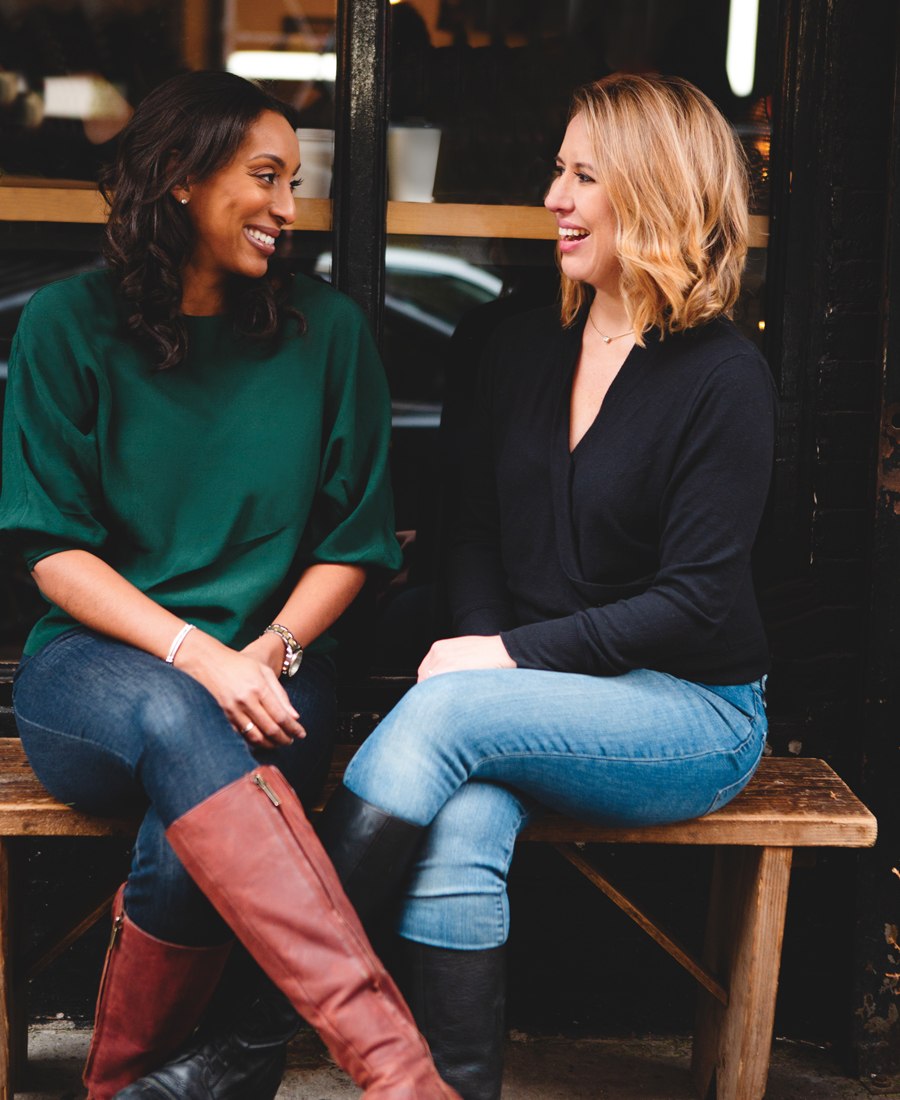 Christine Pride and Jo Piazza, co-authors of We Are Not Like Them. Photograph by Julia Discenza

In the new novel I co-wrote with Christine Pride, We Are Not Like Them, two lifelong friends — one white, one Black — see their relationship upended after a Philadelphia police officer shoots an unarmed Black teenager. It’s a tragedy that hits close to home for both women.

I am white and Christine is Black, and we relied on both of our experiences and insights to flesh out the main characters. We also found inspiration in our own friendship and the intense and sometimes painful conversations we’ve had over the years. These conversations helped inform some of the conflict in the book. More importantly, they helped us build a stronger, more honest and more open bond.

While our novel deals with some issues that are universal — the difficulty of maintaining friendships as we grow up and change, reluctantly planning a baby shower­ for a friend, marital drama — having­ a friend of a different race is still something of a rarity.

A study from 2014 showed that about 75 percent of white Americans don’t have a close friend of another race. Maybe those numbers have changed since then, but I doubt it.

In our book, our main characters have been friends since childhood, two girls who grew up in a mixed-race neighborhood — not an impossibility in Philadelphia, where neighborhoods like Germantown and South Philly have long been diverse communities. But maybe harder than it once was, considering that Philadelphia is the 13th most segregated big city in America.

Unlike our characters, Christine and I met as adults. Making friends (particularly as fully formed adults with a lot of demands on our time) is difficult. Making friends who have experienced the world differently than you have is even harder.

We met in a professional capacity. Christine was working as an editor at Simon & Schuster, and she acquired my last novel. We clicked immediately professionally, and we also both experienced that uncommon spark you rarely feel in adulthood, that nudge that the two of us could possibly become good friends.

We both adore books (we each read about one a week), greasy french fries, bad movies, shopping at Target and strong cocktails. We found that we could talk and work together for hours, sometimes around the clock, as was the case when we worked on a second project together — ghostwriting the novel Marriage Vacation. (The credited writer is Pauline Brooks, a gorgeous middle-age New York writer who also happened to be a fictional character on the TV show Younger.) That book had to be written in about a month, and it was during those four weeks that we started to get truly close. We wanted to keep working together, and we started to form the idea for a novel that would deal with issues of race and friendship. Which meant we had to talk about, well, race and friendship.

Those conversations required me to face some hard truths about my own biases and choices. They also demanded that Christine stand her ground, call out my defense mechanisms, and suffer through my evolution. That was a lot to ask of a fledgling friendship (though it brought on a lot of fodder for a novel about race). There were times we weren’t sure we would make it, through the friendship or the book we were eventually contractually obligated to write.

Christine, who collects friends the way some people collect shoes, has a diverse tribe that includes two white best friends she met as a child and a teenager. She often jokes, laced with bitter truth, that she should have a business card made up: CHRISTINE PRIDE — EVERYONE’S ONE BLACK FRIEND. It hit home for me early on that that was the case for me. She was my one close Black friend, a fact that made me incredibly self-conscious — and, I recently learned, made Christine wary in the early days of our friendship.

She has seen this before: the certain type of liberal white person who thinks they are doing all the right things, that they’re one of the good ones — and that therefore they’re entitled to a closer friendship with her than she actually wanted. She wasn’t concerned about whether I read the right books or donated to the right causes; she wanted to know whether or not I would be able to acknowledge the role race would play in any eventual friendship.

To her credit, she asked me straight out why I didn’t have more Black friends — really, any Black friends. Better to find out early than invest the time in what could be a friendship that would never grow beyond the superficial.

True to the statistics, I had an extremely homogenous group of friends — and hadn’t ever really thought about why. And maybe wouldn’t have, until Christine called me out. But my first reaction was to get defensive. “It’s not like I don’t want them!” I exclaimed during one conversation. “Friendship has to happen naturally. And it just … well, it didn’t happen.”

I wanted to explain to Christine that it was hard for an interracial friendship to happen naturally when you grow up in a white bubble — in my case, a middle-class family in Yardley. The graduating class in my all-girls Catholic school was overwhelmingly white. But I also had to acknowledge that even when you leave that bubble, it’s easy to stick with what you know: At the University of Pennsylvania, which in 2002 was a relatively diverse school, I didn’t have any close Black friends. The majority of my close college friends? White kids like me from right outside Philadelphia.

There are always a million reasons to stay in your comfort zone, right? At one point, I cycled through them: “I don’t think it’s my fault. Or maybe it is. But it’s not like I was walking around saying, ‘I don’t want any new Black friends.’ I can’t just walk up to a Black woman I see in the grocery store and ask her to go to yoga, or the one Black mom from my preschool I only see once a month when we’re rushing to drop our kids off on time.” (Christine’s pointed response? “So your kid’s preschool class has exactly one Black kid?”)

With each justification, I also felt that I was peacocking some kind of wokeness — and I hate the word “woke.” In time, I came to realize and admit that my defensiveness was born of anxiety, a fear of talking about race when it was a muscle I hadn’t used before. I was terrified that anything I said might seem stupid, might be phrased the wrong way, could potentially come across as infuriating even if that wasn’t my intent.

My endless protestations were a problem. More importantly, they weren’t bringing Christine and me closer. At one point, she had to say, point-blank, “You can’t have a close friendship with someone if you have to worry about their reaction. A Black person can’t feel like it’s taboo to talk about race.”

That’s when we started to get somewhere. But it only happened because we both got comfortable with being uncomfortable.

And so we talked. We talked and talked and talked. When it came to talking about race, Christine clearly had more experience. It’s a topic that Black people have to talk and think about for their entire lives. Not talking or thinking about race is a privilege, which she pointed out to me. Christine had to watch in real time as I examined this and other privileges that I enjoyed as a white woman who had never had to have these conversations.

We told one another the stories of our lives — how we got here, how our parents got here. Christine told me about growing up in a mostly white suburb in Maryland. She talked about her parents in such glowing terms, with such intense admiration. I was scared to talk about growing up with two alcoholics who essentially let me fend for myself in the wilds of our suburban subdivision. But I did. Because friendship requires sharing all the parts of yourself. We talked about race, but we also talked about all the other things that build a life. Talking and telling stories continued to pave the path of our friendship.

Talking, however, was only part of what helped build our bond. Yes, I had to conquer my discomfort and fear about discussing race, so I could ask questions and share thoughts. But I also realized our friendship couldn’t be one-sided — and I couldn’t count on Christine to do all the work. While we researched our book, I dug into newspaper archives on the MOVE bombing and Frank Rizzo’s white identity politics. I started showing up at town-hall meetings where school zoning, city budgets and affordable housing were discussed — ­the kinds of things that can make a difference after generations and generations of systemic racism. (It needs to be said: None of my actions make me some kind of model white person. But I’m grateful for how our friendship helped motivate me.)

On my last book tour, a road trip through the South, Christine came with me. We got to stop at Dollywood in Pigeon Forge, Tennessee — a lifelong dream of mine. We got separated in the massive parking lot, and Christine ran smack into a family dressed head to toe in Confederate-­flag regalia … down to their socks. She was obviously shaken when we finally found each other. My first instinct was to laugh: Where did they get so much gear? The Robert­ E. Lee outlet store? But Christine had a much different reaction, and she opened up to me about how the incident made her feel and what it dredged up for her. I didn’t have to find the right thing to say. I just had to listen.

Writing our book about interracial friendship together was a gift. It gave us a way to bridge a friendship divide that few people ever experience. While the book deals with heavy topics — social justice, racism, police violence — we always say, to everyone else and to one another, that the most important thing about it is the relationship between our two main characters. “Come for the social justice but stay for the friendship,” we sometimes joke.

If people take anything away from our book or our story, we hope it’s this: Challenging yourself to forge friendships with someone who isn’t like you will enrich your life in myriad ways. It opens your heart and your mind.

Christine and I had three years of hard conversations. We had three years of writing­ We Are Not Like Them together. And we both realized that it was only by holding space for one another and truly listening that we were able to forge a path forward, both as friends and as co-writers. The end result is a novel that was actually enriched by the journey to create it — art imitating life.

Published as “A Novel Solution” in the November 2021 issue of Philadelphia magazine.