He was identified, in part, due to a unique sweatshirt emblazoned with "Grays Ferry," "Devil's Pocket" and "Schuylkill." 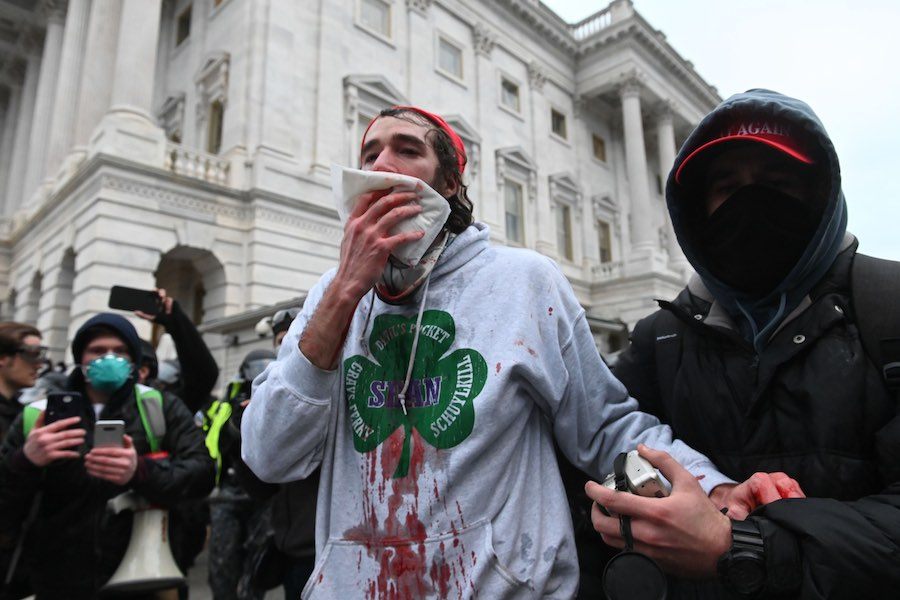 The FBI says this bloodied man is South Philadelphia resident Michael Dickinson, who has now been charged in the Capitol riots. (Getty Images)

It’s been just over nine months since the Capitol riots took place in Washington, D.C., and so far, law enforcement agencies have charged at least 615 people with crimes related to the riots. One of the most recent arrests is 29-year-old Michael Dickinson of South Philadelphia, one of a very small number of those charged who hail from Philadelphia proper.

The FBI arrested Dickinson in Philadelphia on Wednesday after an arrest warrant was issued for him on September 30th in Washington, D.C. He has been charged with assaulting officers, civil disorder, and entering and remaining in a restricted building or grounds, among other offenses.

Like so many of those charged in the Capitol riots, Dickinson was identified through photos and videos from the event. He was also named by an unidentified tipster three days after the riot. The tipster told investigators that Dickinson was the person seen in a video posted to Twitter showing a man throwing an object at police. The object, believed to be a travel coffee cup, struck an officer in the face and chest. The tipster also told authorities that Dickinson had been injured during the riots and checked into a hospital in the Washington, D.C., area.

Investigators obtained a copy of Dickinson’s photo from his Pennsylvania state identification records and compared it to the video as well as other images from the day. They say he can also be seen using a bucket to throw some sort of liquid at officers on the Capitol grounds.

Further review of videos and photos from the day, including the Getty Images photo used for this article, show Dickinson bleeding. The FBI found medical records from a hospital near the capital showing he received treatment there on January 6th and 7th. The date of birth on those medical records is the same as the one on Dickinson’s state ID, and investigators say they found multiple phone calls placed from the address they had for him in South Philadelphia to that hospital on those dates. The calls are believed to have been made by relatives he lives with. Additionally, Dickinson allegedly told staff at the hospital that he had been at the Capitol on the 6th and that he believed he was struck by a rubber bullet, causing the injuries. 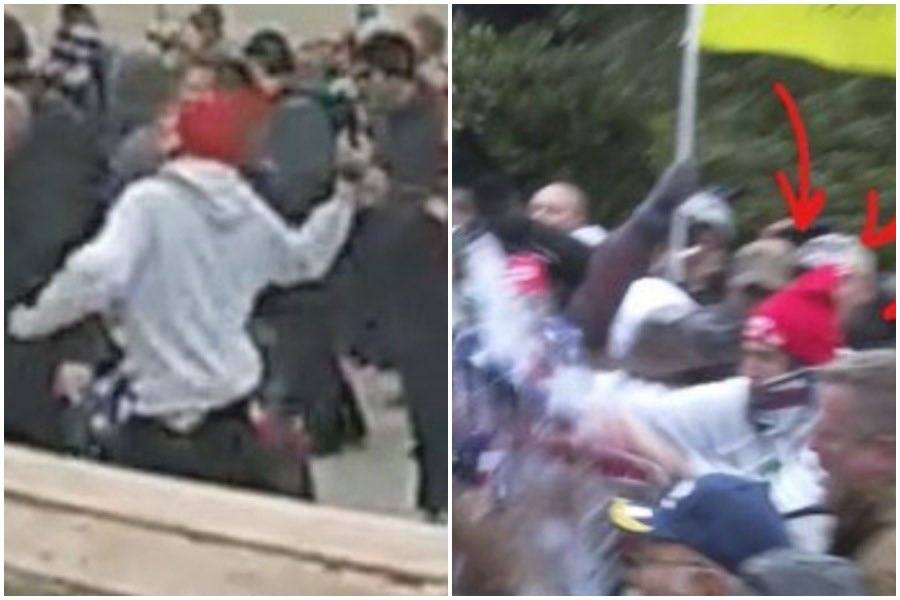 The FBI says these still images from videos show Michael Dickinson of South Philadelphia throwing an object (left) and liquid (right) at law enforcement officers during the Capitol riots. (Images via Michael Dickinson court documents filed by the FBI)

Then there was the sweatshirt. While some rioters wore non-distinct clothing, Dickinson chose a unique sweatshirt that was made in memory of a friend of his who had died, says the FBI. The sweatshirt has the deceased’s name in the middle and also displays the terms “Grays Ferry,” “Devil’s Pocket” and “Schuylkill.” The FBI says it combed through a Facebook page for a relative of Dickinson’s and compared photos of Dickinson with the images from January 6th.

An attempt to reach Dickinson at his home was unsuccessful. According to his uncle, who picked up the phone, Dickinson does not have legal representation at this time.

“They only tell you about the bad stuff,” the uncle told Philly Mag. “They don’t tell you about when he actually helped a female officer who was on the ground being attacked. Nobody cares about that, including the government. Nobody cares about the truth. I bet you won’t put that in your article. Write whatever you want.” (Philly Mag was unable to corroborate the uncle’s account of the incident with the female officer.)

Dickinson has been released on $100,000 bond. He is not allowed to leave Pennsylvania other than for court proceedings in Washington, D.C.