With No Ban on Large Events in Philadelphia, Mummers Move Forward With 2022 Parade

But some Mummers regulars aren't so sure that's a good idea — or if they'll have the money to participate. 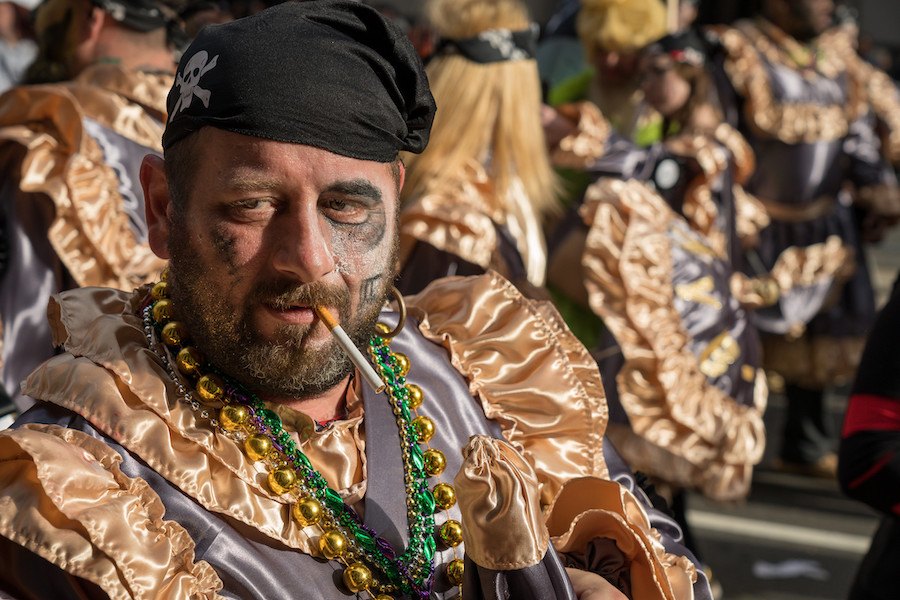 Now that summer is over, at least unofficially, and the kids are back in school, this is a perfectly legitimate question to ask, especially in light of the fact that the city banned the 2021 Mummers parade due to COVID concerns. The answer is that while no official decision has been announced, string bands, wench brigades, comics, and the other Mummers divisions all over the region are moving forward with the understanding that the 2022 Mummers parade is happening, according to Mummers insiders we spoke with.

“We’re planning to do some type of show,” says Nick Magenta, captain of the Polish-American String Band. “We’re not planning to do what we normally do, just because so much of 2021 has been wait and see. It looked great around Memorial Day, but then these variants kicked up.”

Magenta explains that in normal times, September is when his string band rehearses multiple days a week for the January 1st parade. But as of now, they’re sticking to one day a week just in case the city pulls the plug, though he doesn’t expect that to happen.

“The parade is definitely on,” a representative of another major Mummers group told us, under the condition that we not mention his group or name. The top brass from the main Mummers organization, who didn’t respond to our request for comment, told him to keep quiet until they make the official announcement, which is expected in the next week or so.

“If the Mummers Parade was scheduled for today, it would proceed as scheduled,” Philadelphia health department spokesperson James Garrow told Philly Mag. After all, there’s no longer a moratorium on large events in Philadelphia or any restrictions on crowd size. That’s why many thousands of people were able to cram onto the Ben Franklin Parkway less than two weeks ago for the Made In America festival. Of course, Made In America organizers required all attendees to provide proof of COVID vaccination or a negative COVID test result to gain entry, and once inside the gates, all attendees had to wear masks.

Garrow pointed out that masking is required at this time for any non-seated outdoor event with more than 1,000 spectators. But this is September, and the parade’s not until January, so it’s hard to say what kinds of restrictions will be in place then. The mask mandate could be lifted. Or restrictions could become more harsh.

“Because this event is still more than three months away and no similar events are scheduled, I cannot say what enforcement of a mask requirement would look like,” Garrow added. “If the parade were today, the city would have developed and issued guidance.”

A spokesperson for Philadelphia Mayor Jim Kenney says that discussions between the city and Mummers leadership about the 2022 Mummers Parade are “ongoing.”

In July of 2020, Kenney issued a moratorium on all large public events through the end of February 2021, thereby canceling the 2021 Mummers Parade, which would have taken place on January 1st. It was only the third time in Mummers history that the parade was canceled — the last time being way back in the 1930s. Of course, the Mummers being the Mummers, some rogue groups secretly planned to hold their own 2021 parade, though in end, there wasn’t a huge turnout.

“I want to participate, but I am unsure if I want to take this kind of risk,” one Mummers regular told me when I asked if he planned on being a part of a 2022 Mummers Parade. He added that taking part in the Mummers Parade “is like everyone in the city in your face.”

Two frequent Mummers participants we spoke with said that even if they wanted to participate, sponsorships and fund-raising in the COVID era aren’t as easy to come by as they once were. So the money might not be there.

“There have been so many uncertainties,” says Magenta. “And then there’s the weather. Let’s just hope that the weather is the biggest hurdle we have. Let’s hope it’s not four degrees outside.”