Yet another installment in the saga of the man accused of cheating to get into the Boston Marathon. 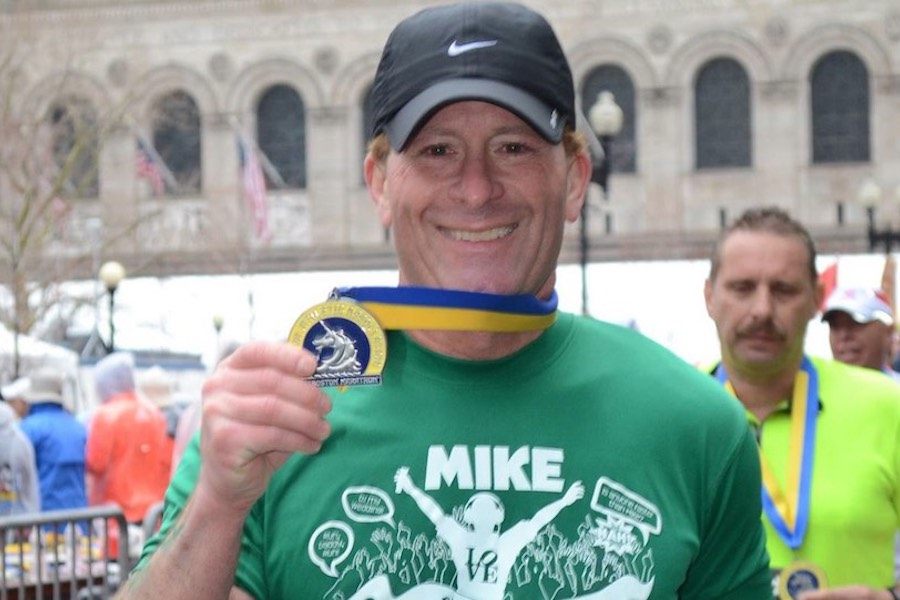 When Black people attack cops (or just, you know, sell untaxed cigarettes), they get killed by police. But if you’re a white guy like Mike Rossi, you get probation.

The 54-year-old former Dancin’ On Air host became a national hero in 2015 after he took his kids out of school to watch him run the Boston Marathon. The Rydal Elementary School administration considered the absences unexcused, and Rossi fired off a letter to the principal, saying that was the stupidest thing ever. The letter went viral, making Rossi an easy Father of the Year candidate.

Alas, the notoriety attracted the attention of the running world, and runners started digging around on the Internet for Rossi’s running history and times. Rossi was soon accused by the running community at large of cheating to get into the Boston Marathon — something he has categorically denied, even mixing it up with 6 ABC meteorologist (and avid runner) Cecily Tynan in the process.

Things didn’t get any better from there.

In June of 2016, police arrested Rossi outside a country-music concert at Lincoln Financial Field after he refused repeated requests by security and police officers to leave the area. He was charged with criminal trespass and later paid a fine and took a court-mandated class.

Just over one year later, and not long after Philly Mag scribe Bob Huber profiled Rossi in the magazine, police arrested him again, also outside a country concert in South Philadelphia — this one at the Wells Fargo Center. Police said Rossi punched a woman in a “domestic incident” outside the show. He was charged with simple assault and took to social media, saying, “I have hit rock bottom.” After the woman didn’t turn up for court twice, the case was tossed.

Court records show that after another domestic incident in Montgomery County in 2018, Rossi pleaded guilty to the measly summary offense (a charge lower than a misdemeanor on the crime scale) of “subjecting others to physical contact.” He paid a whopping $460.25 in fines.

But did he learn his lesson? It seems not. Which brings us to the case at hand.

In January 2020, police responded to Rossi’s home in Upper Gwynedd Township for a domestic disturbance. According to court documents, Rossi was aggressive with the two cops who went to the house. After telling one of the cops “Move, bitch,” he shoved the cop into a wall on a staircase and then moved into the kitchen. While that cop called for backup, Rossi hit the other cop in the face, drawing blood. After telling Rossi they were going to tase him if he didn’t calm down, the cops did just that, and Rossi was placed under arrest.

Rossi was charged with a bunch of offenses, including two felony counts of second-degree aggravated assault, simple assault and resisting arrest. He was supposed to go to trial last Friday. But at the last minute, he pleaded guilty to one of those counts of aggravated assault.

According to a spokesperson for the Montgomery County district attorney’s office, Rossi’s lawyer, Michael Parkinson, was pushing for a deal that would have had Rossi plead to just simple assault, a misdemeanor. But the spokesperson said the prosecutor on the case refused to go any lower than one count of aggravated assault.

Normally, an aggravated assault conviction can mean years in prison. Hard time. But in Rossi’s case, the sentence — approved by Judge Todd Eisenberg, a fellow suburban middle-aged white guy — is just three years of probation. Not a single day in jail for a guy who has been arrested at least three times before — and who, keep in mind, hit a cop.