What Is Old City Without Tourists?

When travel restrictions curtailed the red-white-and-blue-clad throngs, another group of ardent pilgrims took their place, and changed everything about how we saw our home. 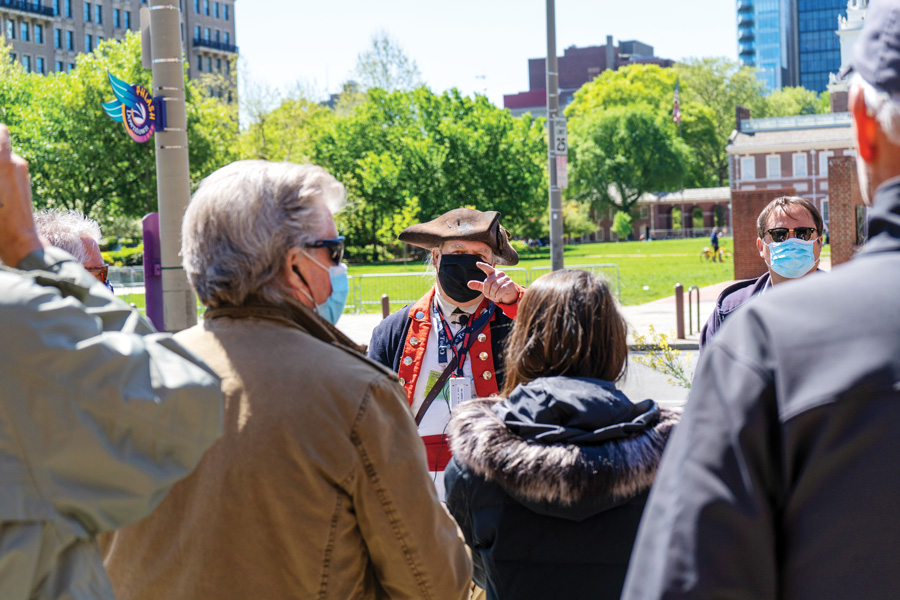 A “pirate” gives the tourist spiel on Independence Mall in Old City. Photograph by Drew Dennis

Last summer, for the first time in anyone’s memory, the tourists didn’t come.

For two decades, we’ve lived in Old City. “A block from the Betsy Ross House and two blocks from the Liberty Bell,” we tell out-of-town friends and family. There are other landmarks by which you can situate our address, but it’s always seemed more accurate to describe our home by its proximity to Colonial kitsch and American mythmaking. We don’t say that we’re a couple blocks from Ben Franklin’s grave or Independence Hall. It’s always been Betsy and the Bell. For us, it wasn’t the rich history that defined our neighborhood so much as the version of it that fit on the t-shirts and refrigerator magnets in the windows of the tourist shops that dot our blocks.

Our nephew was visiting with his mother one summer when he noticed the many cosplaying tour guides in their breeches, buckle shoes and tricorn hats. With all the conspiratorial seriousness a five-year-old can muster, he asked with concern, “Mom, why are there so many pirates here?” We once heard a little girl address her tour guide, who was in full Betsy drag, complete with the ruffled “mob cap” women wore in Colonial times, as “Mrs. Claus.” There are much more dignified ways to look at the importance and privilege of living in a historically significant area, but to us, it’s always been the place where Mrs. Claus and the pirates hang out every summer.

Still, we’ve had a somewhat complicated relationship with tourists over the years. We have hometown pride; we consider it our duty to be friendly and accommodating to any visitors we encounter. We’ve had the pleasure of seeing people from all over the world discover the charm of our cobblestones and our Ben Franklin impersonators. But there’s no denying the recurring sense that when it comes to a certain strain of American tourist, gay couples like us likely wouldn’t receive the same polite consideration if our roles were reversed. We moved here just before 9/11, and in the decades since, patriotic symbols were (re)weaponized as the country grew increasingly polarized and partisan. We first encountered the more conservatively patriotic type of tourists at the height of the Freedom Fries/“You’re either with us or against us” era, then kept meeting them anew through the embarrassing weirdness of the Tea Party years and, in the last few summers before lockdown, as they donned MAGA hats.

This doesn’t describe the majority of visitors, many of whom aren’t even American, of course. But we came to see the masses of mostly white, overwhelmingly heterosexual, traditionally dressed Americans who came here — the families in coordinated red, white and blue outfits, the church groups in their flag sweatshirts, the retirees in their Spirit of ’76 visor caps — as visitors from an America we didn’t tend to visit ourselves. We had this suspicion reaffirmed every time a group of them stopped us to ask for directions or restaurant recommendations. We’d see the sudden uncomfortable realization on their faces when we opened our big gay mouths and pointed them toward Penn’s Landing or the best cheesesteak place.

Of all the kitsch that surrounded us from April to September every year, there was nothing tackier or more ridiculous than the ill-fated Ducks, those unholy bus-boats that once lumbered down our street every half-hour at the height of tourist season before plunging into the Delaware River. There’s no way to explain the experience of looking out your front windows and seeing a bunch of people expressing their patriotism by playing kazoos while a tour guide with a microphone leads them in song — in a boat. Because these routes were timed, it was always the same song: “You’re a Grand Old Flag,” the words to which we still know like our Social Security numbers. Sometimes, when a Duck got stuck at a light outside our open windows, we’d snap and loudly sing along, pointedly omitting one letter from “flag.” At a time when it seemed like every state was passing anti-gay-marriage amendments before sending its voters here to eat our soft pretzels and Tastykakes, we bitterly joked that we were going to stand in our front window and make out in our underwear for the kazoo-wielding red-staters.

So yes; a long, complicated relationship, the lack of which we felt more than we ever could have predicted. In these guests’ absence, another group of ardent pilgrims took their place and changed everything about how we saw our home.

We aren’t just living in the birthplace of America. Because of the deep power of our neighborhood’s symbolism and how it touches people in different ways, we’re living at America’s crossroads.

There’s one neighborhood landmark we never even considered and barely noticed in all our time here: Philadelphia police headquarters, the Brutalist, handcuff-shaped roundhouse that sits a few blocks from Independence Hall. It’s a testament to our blind privilege that its presence barely registered over the years. But in Pandemic Summer, it was the hottest spot in the neighborhood. It wasn’t Ben Franklin’s or Betsy Ross’s face we saw on the street outside; it was George Floyd’s and Breonna Taylor’s. “You’re a Grand Old Flag” was replaced with “No justice, no peace!” The conservative white patriots of the yearly tourist trade stayed home, where we suspect some spent their time protesting mask ordinances, if not dabbling in insurrection. They were replaced by a multi-racial, queer and queer-friendly all-ages pilgrimage of justice warriors whose righteous anger seemed to be matched by their joyously defiant energy as they marched back and forth between the pillars of American symbolism and the seat of local law enforcement dozens of times that locked-down summer.

Philadelphia is one of the most historically significant cities in America, and Old City is its most historically significant neighborhood — a relatively small patch of land containing not only the birthplace of American democracy, but the birthplace of its mythology and iconography: a place where Thomas Jefferson drafted the Declaration of Independence, Ben Franklin flew his kite, and Betsy Ross (may or may not have) designed its most potent symbol. This past year, we realized that living here isn’t about the kitsch or the kazoos. It’s a holy ground for the two competing tribes of modern America: conservative, nationalistic patriots who take comfort in myths and symbols, and change-minded citizens who see it as the place where the promise of equality was first expressed but never truly delivered. People come here either to celebrate the paragons of America’s founding or to hold them accountable for their shortcomings. We aren’t just living in the birthplace of America. Because of the deep power of our neighborhood’s symbolism and how it touches people in different ways, we’re living at America’s crossroads.

Just as we know the usual flow of tourists will likely return in some form this summer, including many people who cheered on the storming of the Capitol or refused to make personal sacrifices in the wake of over half a million deaths, we are also all too sadly aware that somewhere, a Black person will die at the hands of a cop, or an Asian person will suffer the violent whims of racists, and those same protesters will make the call and rally their compatriots once more. Both of these patriotic tribes will cross paths outside our front door soon, and a summer of confrontations feels inevitable. If we learned anything this year, it’s that we owe our support far more to those rallying for freedom and justice than we do to those who think you can buy those things on a t-shirt or refrigerator magnet. They’ll have to find their own cheesesteaks. We’ll be too busy marching to help.

Tom Fitzgerald and Lorenzo Marquez are the authors of Legendary Children: The First Decade of RuPaul’s Drag Race and the Last Century of Queer Life; publishers of the Tom & Lorenzo blog; and hosts of the Pop Style Opinionfest podcast.

Published as “Between Betsy And the Bell” in “The City Survives” essay collection Six of Philly’s Best Writers on How the Past Year Changed the City — and Us Allin the June 2021 issue of Philadelphia magazine.