Not Enthusiastic About Voting for Either Larry Krasner or Carlos Vega? You’re Not Alone.

Both campaigns reveal what happens when polarizing politics negate the legitimate concerns of voters. 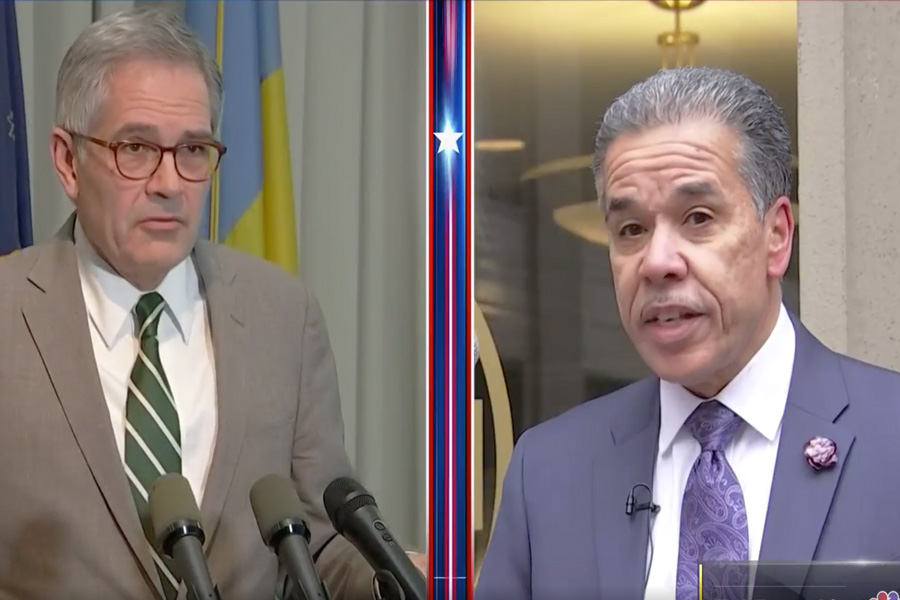 With less than two weeks to go before the Democratic primary, I cut the suspense in my household by casting my mail-in vote.

Voting for the diverse slate of judicial candidates was easy, as was voting “no” to ballot questions one and two and “yes” to the rest. But when it came to voting for either Larry Krasner or Carlos Vega for district attorney, I felt conflicted.

This wasn’t like the dilemma I wrestled with last month over which Hollywood heavyweight, Frances McDormand or Viola Davis, deserved the Best Actress Oscar (and I’m still struggling with that final outcome). No, this voting conflict was rooted in deep indifference. Because of my disdain for both Krasner’s and Vega’s campaigns, I considered leaving this ballot space blank. But elections are about decisions.

So I took a deep breath, voted for one of the candidates, sealed my ballot, and dropped it in the mailbox. Like the local Democratic City Committee, I won’t be endorsing either candidate publicly. Both are running ultra-polarizing campaigns and represent the worst side of politics.

Krasner’s campaign appeals to the most preachy, paternalistic white-savior progressive voices — some of whom have had the audacity to question my commitment to protecting other Black people because I wouldn’t endorse the DA. Meanwhile, Vega’s campaign is touting the endorsement of the Fraternal Order of Police, an institution that has had its fair share of racism.

Krasner extremists want you to believe that electing Vega will mean the return of Trump-era law-and-order politics, more injustice, and criminal cops running rampant with no accountability. Vega extremists want you to believe that electing Krasner will transform Philly into the crime capital of America, further the end of law enforcement altogether, and leave victims in the dark forever. The stakes are clearly high, but the melodrama makes it hard to have faith in either candidate.

I’m a Black queer progressive who has called for the defunding of the police, and I find Krasner’s performative wokeness — a pattern of behavior in which he spends more time acting self-righteous on social justice issues than achieving progressive goals  — distracts from the causes I believe in. For starters, the concept of being a “progressive prosecutor” is oxymoronic. Prosecutors, just like the police, are part of a flawed system that incarcerates people. Prosecutors are committed to convicting people. That’s the job. Whether a DA’s office decides to offer lesser charges or not, the idea that it can serve as a progressive institution is patently false. I would never consider a police commissioner a progressive; regardless of how many reforms commissioners may plan to make, they’re still operating within an oppressive system. What makes the DA’s office any different, given the institution’s long-standing history of criminal injustice to poor, Black and brown people?

Krasner, a white straight man who never prosecuted a case before being elected, has shown the limits of what a great white hope can do to redefine a broken system. Sure, he successfully exonerated 20 wrongfully convicted inmates, he hasn’t actively pursued the death penalty, and he’s cut the city’s probation rolls by a third. But he has also backpedaled on some of his major proposals. Once a huge proponent of ending cash bail for many offenses, he has now gone so far as to criticize judges for setting bail too low for gun crimes. Which is why progressives sometimes wrestle with him as their criminal justice leader.  Krasner is doing the work of an advocate, with some successes mirroring what a chief public defender would do. But the results feel underwhelming, since he’s an actual prosecutor who needs to strike a balance.

The skyrocketing homicide rate resulting from the pandemic has now created public cries for making more arrests and getting killers off the streets. As much as Krasner would like to pretend the calls for more law and order are only coming from Trump/FOP disciples, they’re also coming from the Black and brown communities he claims to be listening to. In a glossy PBS documentary on Krasner’s first term, a Black mother expresses rightful rage at Krasner after his office frees the man who killed her teenage son because investigators accessed incriminating evidence without a warrant. The mother’s confrontation with Krasner highlights the complexity of criminal justice reform, proving it isn’t as black and white as progressives and conservatives have tried to frame it. Translation: Philadelphians aren’t fully ready to dismantle our current system that is set up to prosecute/criminalize people — which is why we struggle to elect candidates who can both do the job well and institute criminal justice reform.

This debate has created an opening for Vega. One of three dozen veteran prosecutors fired by Krasner when he took office in 2018, he says the city’s gun-violence problem is a result of the DA’s alleged soft-on-crime approach.

“I’m that person who believes that we need reform and we need safety. We deserve both,” Vega said in a recent interview with NBC 10. “I’m going to bring reform because I hear you, I’ve lived it, but I need to make you safe.” But how can Vega argue that he’s for both reform and safety when he’s been endorsed by the FOP? Vega’s critics have painted him as a “win at all costs” prosecutor, one accused of keeping a man who’d already served 20 years in prison behind bars even after the emergence of DNA evidence that exonerated him. It’s obvious that the only way Vega, the first Latino homicide prosecutor in Pennsylvania, can defeat Krasner is by relying on the support of the police — who just happen to be disproportionately targeting the very men-of-color voters he needs to win.

An ideal prosecutorial candidate would be one who doesn’t exist. Both the candidates and the job are loaded with misleading takes on serving justice that lead to broken promises and mass hysteria. In a perfect world, a top prosecutor would only go after the most hostile crimes and work actively to exonerate innocent people. But divisive politics, racism, money and ego have driven the office to alienate the most marginalized, with a few victories being falsely framed as massive change. Reform and incremental change won’t do anything to address the current state of prosecuting and policing in America. There must be a revolution, one that seeks to abolish rather than simply reform. Both of these neoliberal candidates are more concerned with keeping the police department and the DA’s office intact than with eliminating them. (The fact that both are part of the two-party system proves it.). But this is a reflection of society overall: We want sweeping social justice, but we also want to maintain the ever-so-intrusive role of policing and prosecutors. History continues to show us we can’t have both.

All these contradictions and hypocrisies have made this one of the most frustrating primaries I’ve ever voted in. Whoever wins will need to seriously reevaluate the politically polarizing approach to crime in this city. Chasing the national spotlight as a faux-woke social justice crusader isn’t the DA’s job (it’s to prosecute — to keep the citizens of Philadelphia safe). Nor is playing both sides of the police accountability game. So either way, immediate change isn’t coming on May 18th. Both candidates leave me yearning for so much more.