Why Is Larry Krasner Still Tight With Shaun King?

Voters should be concerned that our self-proclaimed progressive DA is chasing the national spotlight with the help of an infamous figure who's been accused of grifting and targeting activists. 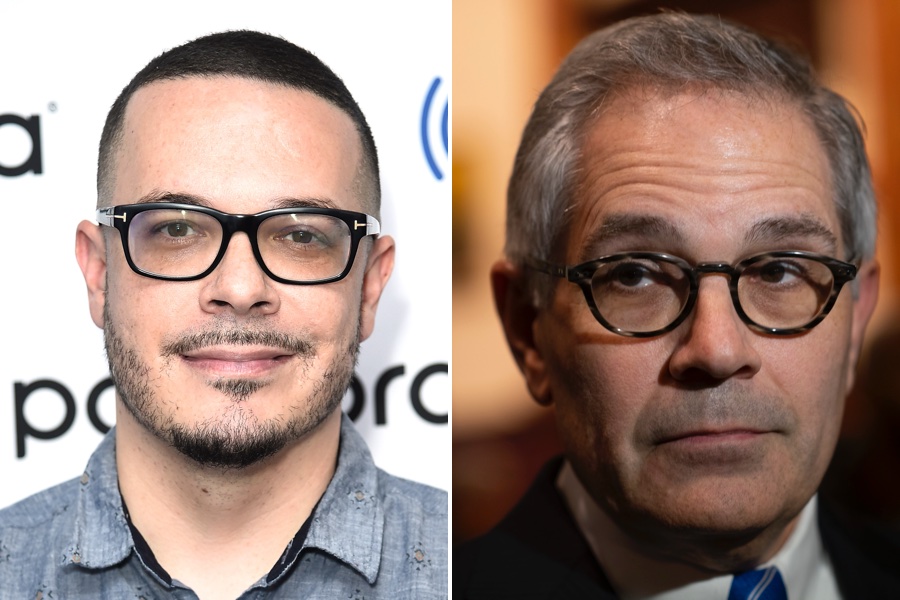 As the Democratic primary race for DA begins to heat up, the incumbent is off to a rocky start.

Last Tuesday, community activists disrupted a national fund-raiser for Larry Krasner. The Zoom event, called “A Conversation About Real Justice in Philadelphia,” was moderated by controversial activist Shaun King and was open to the public. Hosted by King’s Real Justice PAC, this high-profile Q&A was intended to focus on Krasner’s criminal justice reform efforts. But to activists in the chat, it just showcased Krasner’s problematic relationship with King at the expense of developing partnerships with real progressives in Philadelphia.

“Krasner has had no gratitude for the work that brought him in,” says Raina Poonam, a community member who attended the Zoom call. “By choosing Shaun King, who’s under scrutiny for misuse of funds raised for victims of police violence, it made Krasner look bad.”

Following the 2014 shooting death of Michael Brown in Ferguson, King rose to prominence with blogs and viral social media posts on Black Lives Matter protests. Shortly after, he garnered a national reputation for his aggressive Internet vigilantism and crowdfunding for families impacted by police violence. But in 2017, King was hit with ongoing accusations that he misappropriated funds for Black Lives Matter causes and targeted other Black activists and critics. In 2019, he faced pushback after threatening to sue a young Black journalist and activist, Clarissa Brooks, who questioned his fund-raising efforts. (I also became a target of his online bullying that year after I criticized Real Justice PAC for promoting itself via Facebook ads.)

Despite King’s consistent denial of misconduct, stories continue to come out exposing questionable behavior and alleging financial impropriety. A scathing exposé published last year in the Daily Beast revealed that several of his recent former employees had raised concerns about his lack of accountability and fiscal management on current projects, such as his publication The North Star.

Meanwhile, Krasner has backpedaled on some of the promises he made to local progressives who got him elected. Though he vowed not to ask for cash bail during his campaign, his office began to request it during the pandemic. He has come across as “unconvincing” in his efforts to bring justice in the controversial case of Black activist Mumia Abu-Jamal, who recently tested positive for COVID-19 and continues to suffer from other health problems while incarcerated. But Krasner’s been too busy hanging with King and getting top fund-raising dollars from wealthy tech tycoons and celebrities like John Legend to tend to the growing drama in his own backyard.

Which raises a question: Why would Krasner, who has built a reputation of being a favorite of progressives and social justice activists alike, continue to work alongside a man who is despised by so many within his core base?

Answer: Krasner is most likely clout-chasing the national spotlight for higher political office. You don’t get an eight-episode PBS documentary series about your first term in office, political fund-raisers with national activists like Deray Mckesson, countless big-name publications profiling your every move, and advocates pushing for you to be appointed to the Supreme Court if you intend to stay in Philly for good.

In spite of his controversies, King continues to be one of the most prominent faces in the current movement for social justice. His persona on social media is huge, and his ability to fund-raise for political heavyweights, such as Bernie Sanders, is undeniable. Krasner owes a great deal of his meteoric rise to the early support of national public figures including King, billionaire George Soros, and other out-of-city interests. Which is why we continue to see the DA stand alongside King and push the activist’s other initiatives, such as the more recent Truth, Justice and Reconciliation Commissions.

But at what point does true integrity override the money and fame for Krasner? It’s become apparent that despite his “woke” coalition of advocates, he actively ignores the glaring problems of collaborating with King. He hasn’t addressed the ongoing public debate regarding King, nor has he attempted to condemn some of his past actions. (Krasner didn’t respond to Philly Mag’s request for comment for this story.) Apparently Krasner expects Philadelphians not to bother themselves with how he’s conducting himself nationally — even though he was elected locally. That sounds more regressive than accountable — which is what he campaigned to change within the DA’s office in the first place.

If that isn’t enough to convince Krasner to abandon his ties to King — Philly, we have a real problem.