"For a business owner, renting is a form of sharecropping," explains Harriett's founder Jeannine Cook, whose lease is up in July. 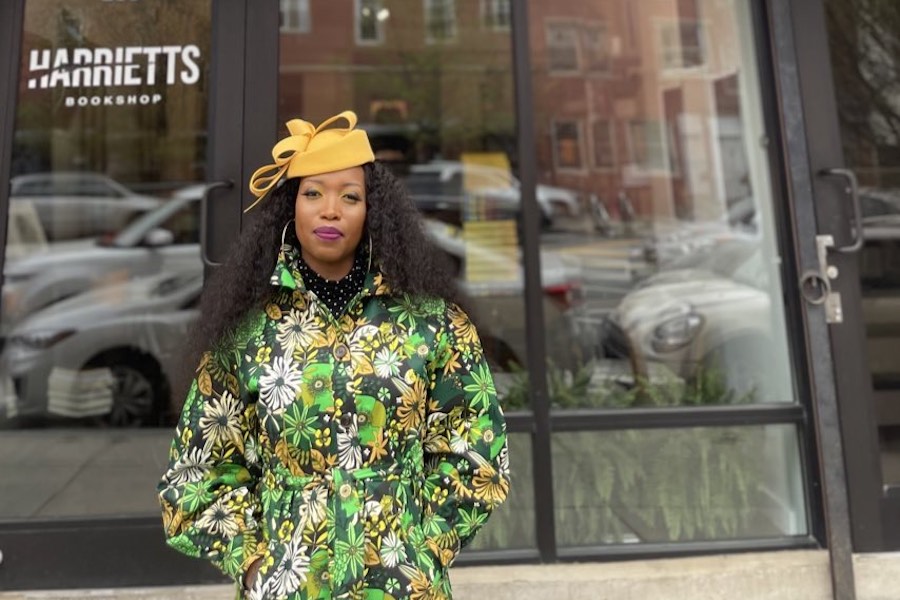 Last Saturday marked Independent Bookstore Day in the United States, so Harriett’s Bookshop owner Jeannine Cook decided it was the perfect time to launch an ambitious GoFundMe to raise enough money — $300,000 — to buy a permanent location for her bookstore in Fishtown, where Cook is currently renting.

“We need a space that is our own space,” Cook told Philly Mag on Monday, as the Harriett’s Bookshop GoFundMe surpassed $75,000. “Right now, we rent. For a business owner, renting is a form of sharecropping. I am bringing people to this space and to this neighborhood. I am paying taxes. But this is not something I own and that I can pass down to my children.”

Harriett’s Bookshop, which is located in a predominantly white neighborhood, focuses on works by women, primarily women of color. The name is taken from abolitionist Harriet Tubman, and the shop features artwork and artifacts that honor Tubman.

Cook opened the bookstore’s doors on Girard Avenue on February 1, 2020, less than two months before COVID would shut down the city. That forced Cook to shift her fledgling business to an online operation temporarily. Then came the murder of George Floyd in Minneapolis and the large-scale civil unrest that followed. Cook was right in the middle of it, handing out free books about Black leaders during protests and using social media to call out injustice and call for action.

“When they were marching out front with the bats, we had people put bodies in front of the store,” Cook remembers of the tense and racially charged events that unfolded in her neighborhood last June. “The reception to us has been mixed. We have people come in here every single week to buy a book and to make sure we are okay. And then we’ve had ignorant people who’ve just been nasty, walking in and saying things like, ‘Who do you think you are?'”

Cook says that one man who came in during the store’s early days to ask that very question wound up having a productive conversation with her and buying a book about Tubman.

“He had no idea she served in the Civil War or worked as a spy or a bricklayer,” she says. “But you get me started about Harriet, and I’m spitting it! That’s what we are here for. I’m not looking to fight or have arguments. I am here to spread knowledge. The knowledge is needed.”

Fishtown might not have been the most hospitable location in which to open a store like Harriett’s Bookshop, but Cook, who also lives in the neighborhood, is determined to stay there. Permanently. The lease on Harriett’s is up in July, and rather than sign a new long-term rental agreement with her current landlord, Cook has her eye on a property in Fishtown. She says she needs $300,000 to close the deal. Hence the GoFundMe.

As of Tuesday morning, more than 1,400 donors had contributed $76,282 to the cause, with several donations of $1,000 or more. Supporters include prominent authors and artists Kiley Reid, Roxane Gay, Ijeoma Oluo, Jennifer Weiner, Ursula Rucker and Mahogany Browne.

Cook hopes to negotiate a month-to-month lease with her current landlord in Fishtown while she purchases the new property and gets it ready for opening sometime later in 2021. Cook says she wants to avoid banks and mortgages to complete the real estate deal because of the history of racism and redlining among the country’s financial institutions.

Cook won’t divulge the location of the property in question because, she says, she doesn’t want anybody else to get it first. She points out that the price tag is an incredible value in a neighborhood where real estate values have skyrocketed.

Meanwhile, Cook is set to open another similarly focused bookstore in Collingswood on Mother’s Day. Ida’s Bookshop will pay homage to Black journalist and activist Ida B. Wells-Barnett, one of the founders of the NAACP. Like Harriett’s, Ida’s will be housed in a rental property.

“At least for now,” Cook says. “There’s a lot in limbo. I want to scope out if this is something the community really wants before I look to make it more of a permanent presence.”