Harriett’s Bookshop owner Jeannine A. Cook describes her store as “if black girl magic were a bookshop.” 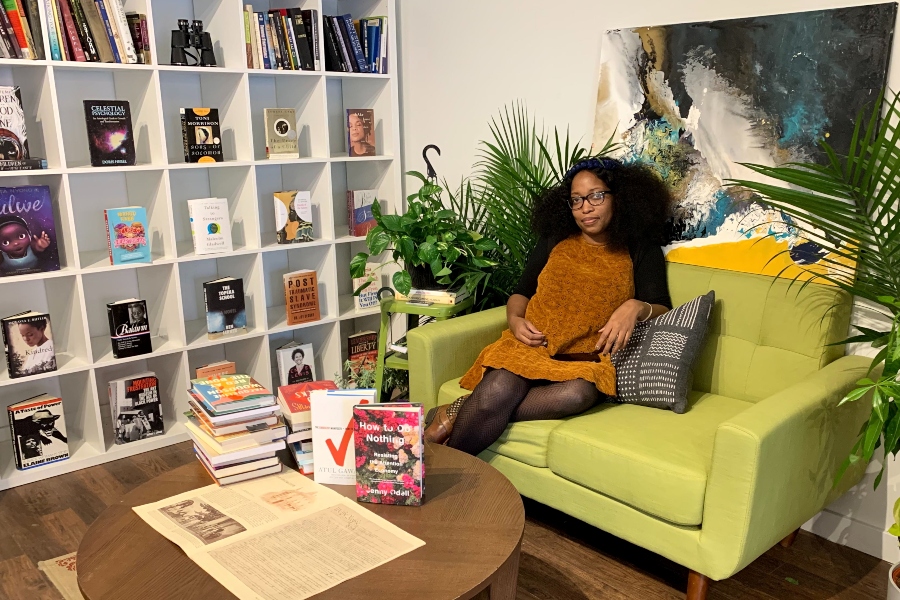 Jeannine A. Cook in her bookstore, Harriett’s Bookshop | Photo by Claire Sasko

Jeannine A. Cook, a writer, educator, and longtime Philly resident, chose the scent — it’s frankincense — carefully to promote “healing” in her soon-to-open bookstore, located near the intersection of Girard Avenue and Marlborough Street.

“Throughout the whole process [of opening], I kept thinking, ‘What could I give people that wouldn’t cost a lot but would potentially have a positive effect on their lives?’” Cook said. “Even if they decide not to buy a book, they get the frankincense, and they remember that they can come back to this space for that vibe.”

We caught up with Cook during a visit to Harriett’s, which is currently in a sort of “soft opening” phase. On February 1st, the store will officially open with a launch party (joining plenty of other recently debuted indie bookshops in Philly), but you can visit and purchase books during what will be the regular hours, 10 a.m. to 6 p.m. daily, until then. In addition to offering a stellar book selection, the store will feature rotating displays from local artists and events.

Below, Cook tells us how she wound up in Philly, what she sees as Harriett’s mission, and where the store got its name.

As a writer and teacher, you seem to have the perfect background for opening a bookstore.
It’s eclectic, I’ll say that. I came to Philadelphia when I was 17 to study media and communication at the University of the Arts. I’d never left Hampton, Virginia, where I’m from, so it was a culture shock to move to Philly, but I thought it was the most beautiful city in the whole world. In high school, my best friend and I would drive up to Philadelphia from Virginia and stare at City Hall and just say, “Oh my gosh,” and drive back. Our parents couldn’t figure out what got us so excited. 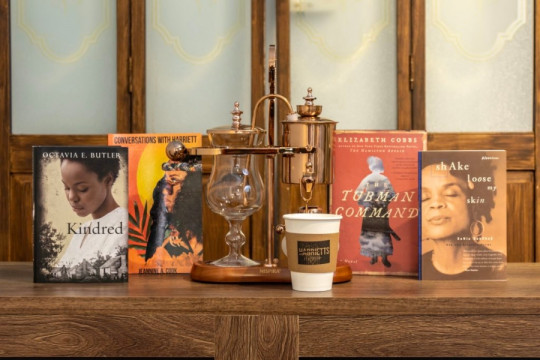 What was it?
You know, Hampton doesn’t have a real cultural scene. Here, there was art everywhere. There was a love and appreciation for blackness in this city, and I was like, “This is where I need to be.” So I went to art school at the University of the Arts. And to get to the point of me having an eclectic background, I got pregnant my sophomore year. That really changed everything for me. A community leader was just like, “You know you can still finish school, right?” And an amazing thing happened where the University of the Arts allowed me to bring my son to class every single day, every single class.

How old was he when you started doing that?
Oh, three months. After I had my son, I realized I’m not gonna be able to take a normal path. Like, I have to raise this baby, I still have to educate myself and educate my community. So I started something called “Positive Minds.” I and other art students went out in the street and taught children and families how to use all this equipment that we were getting. And that’s where I started off doing education, curriculum, and community development work. I was just like, ‘This is way bigger than I thought.” That’s how I feel about the bookshop. I’ve just been following my intuition, and it took me in these amazing directions.

How does the name Harriett’s Bookshop align with your store’s mission?
The mission is to celebrate women artists, women authors, and women activists. As a millennial black woman, it doesn’t fit the narrative — like I don’t think I’m supposed to be able to [open a bookshop]. But there are a lot of things I’m not supposed to be able to do. I’m not supposed to be able to take my son with me to class every day. And I think that’s why I think I’m like Harriet Tubman. I’m a rebellious spirit, determined to do what I think is going to support people and their freedom. That’s what the collection does. Doing that under the name ‘Harriet Tubman’ feels really fitting. 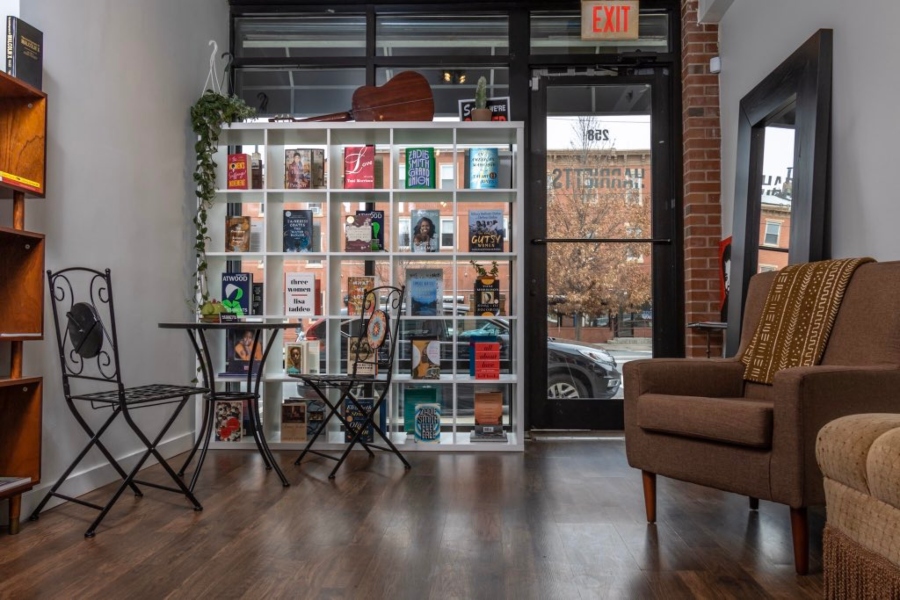 How does curriculum work factor into your plan?
I also worked at Yes Philly, where I taught young people who had formerly decided to drop out or were pushed out of high school. One of my responsibilities was combining the arts with the academics. I’ve been doing that for a while, thinking of ways these two worlds kind of coincide, education and art. And I do that in this space.

The plan is for the collection to change a little each month, depending on which artist we’re featuring. For instance, an artist might come in and think about the idea of home. So we might celebrate a book like The Yellow House, by Sarah Broom, or Men We Reaped, by Jesmyn Ward. I almost see it like a gallery in that way.

I think that women haven’t seen a place like that yet, and in future we’ll see more of it as we push back against, you know, just “Gilead.” Even with everything happening with Elizabeth Warren, and folks saying, “This country’s not ready for a female president,” just because this country’s too sexist for a female president — in order to shift the paradigm, this is my little addition.

Can you talk a little about your book selection?
Most of what you see is what I want to read or have read. If I think an author is fly, then I’ll get more of their stuff. Of course, all of Toni Morrison’s collection is in here, and it will always be. Zora Neale Hurston just had a new book come out posthumously. I have a shirt with Zora, Octavia [E. Butler], Toni and Alice [Walker]. As much as I can find of their work will be staples in the collection always. Folks can also come in and place an order. And then we have the used books section, and we’re inviting people to make a donation. 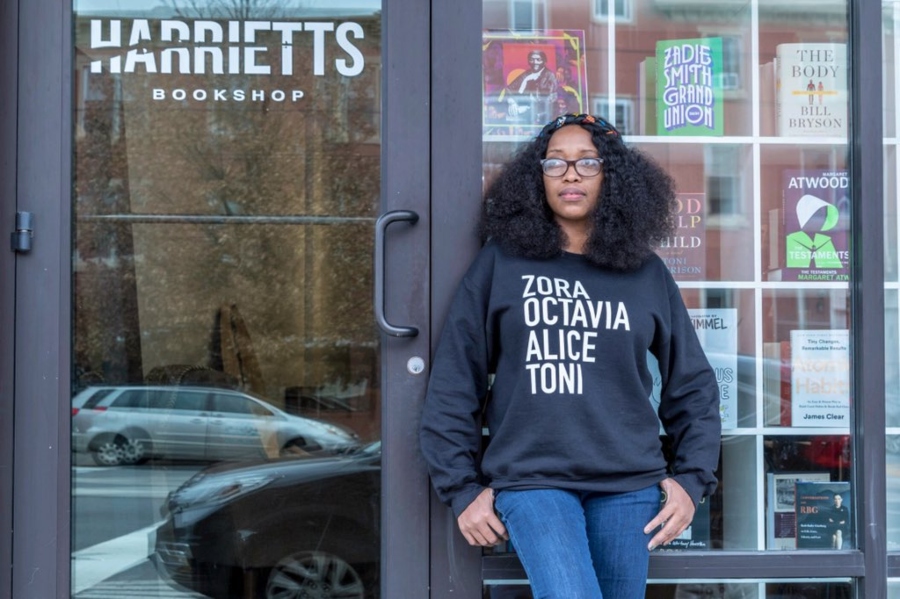 Why’d you pick Fishtown, and how’s it going so far?
It just kind of fell into my lap. Before I opened the shop, I went to see one of my mentors, and he was like, “This was the worst place for you to end up.” People were like, “Fishtown has a really racist history.” And I remember when I first came to Philly, someone was like, “Don’t go down there.” But I haven’t had that experience since I’ve been here. Folks have been very interested, and I’ve gotten a lot of good feedback and suggestions. Frankford Avenue is so popular, and it’s been helpful for us to bring some of that movement down Girard as well.

The one thing that surprised me coming to Fishtown is that almost all the children’s books that I bring in are gone. The families are coming in here. Somebody suggested doing a story time. And I’m like, I’m never not going to be a teacher. It’s always going to be my life.

Favorite writer?
My all-time favorite is Toni Morrison. If this place weren’t called “Harriett’s” it definitely would be called “Toni’s” [laughs].

See the Harriett’s Bookshop website and Facebook page for information on the store opening and events (including a Whiskey Writers Club!).