An Architecture Critic Ranks the Five Most Interesting Buildings in Philadelphia

No, City Hall and Independence Hall aren't on the list. 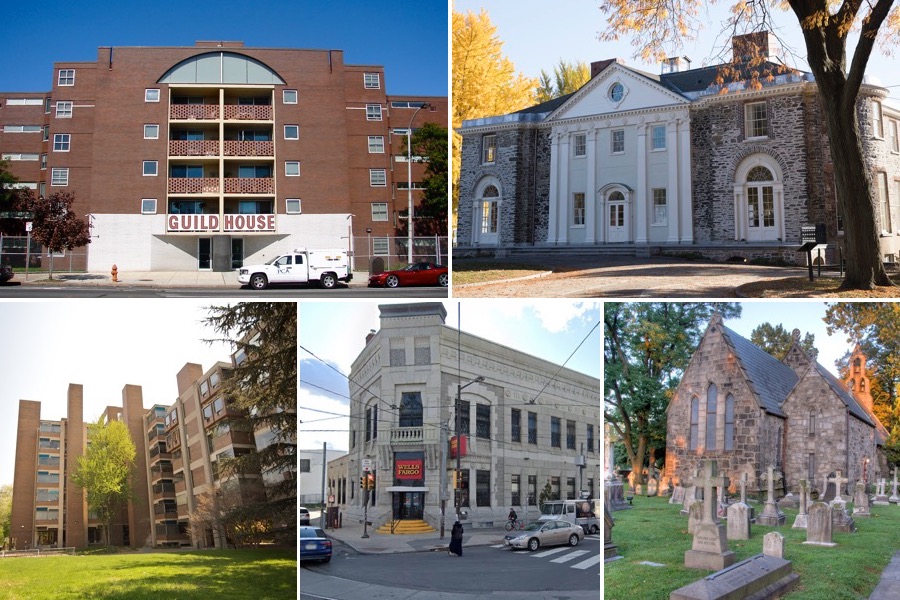 Of the many Philadelphia buildings, these are the five most interesting, according to architecture critic Michael J. Lewis. Photos via Creative Commons, Woodlands Cemetery, and Google Maps.

One virtue of an old city like Philadelphia: It contains centuries’ worth of impressive buildings. Independence Hall. City Hall. The Art Museum … whether because of their age, their historical significance, or their hard-to-fathom feats of engineering, these buildings tend to be some of the most popular structures in the city.

Fair enough. But there’s much more to Philadelphia’s architectural footprint than the famous structures you see in the guidebooks. It’s all those other buildings — the less-photographed ones, scattered from block to block — that together offer a kind of first-person textbook of architectural styles and development over a period of centuries. This is part of what Michael J. Lewis, a Wall Street Journal architecture critic and biographer of the great Philly architect Frank Furness, believes makes Philadelphia a great architectural town. Lewis, whose new book Philadelphia Builds — a selection of essays about the city’s built environment — is out in April, spoke with us about his top five most interesting buildings in the city. 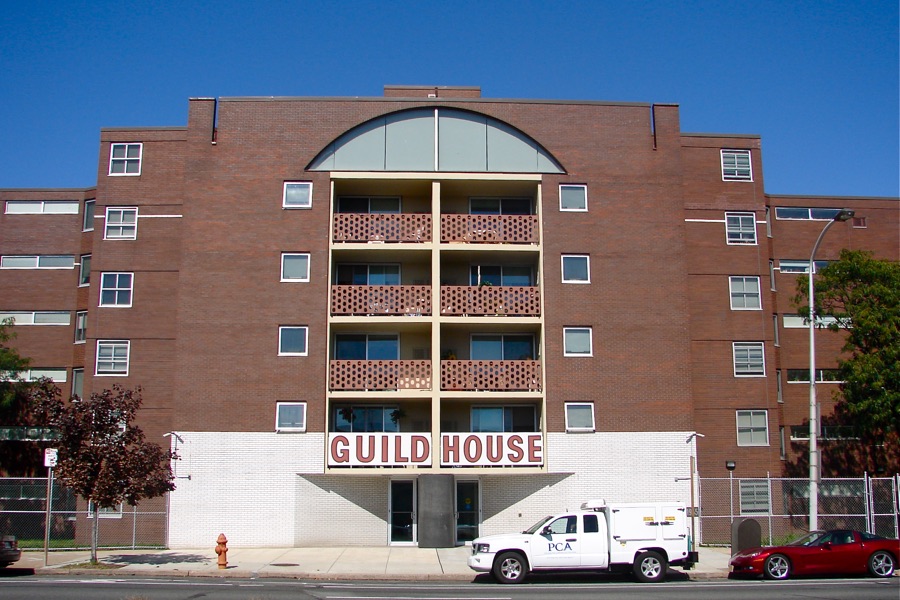 Most low-income senior housing complexes aren’t architectural gems. But then, most low-income senior housing complexes weren’t designed by Robert Venturi. Venturi, described by Lewis as “one of perhaps two architects that Philadelphia has given the world who are internationally famous” (the other is Louis Kahn — more on him in a bit), designed the building in part as a response to “international modernism,” the architectural style du jour in the 1960s.

That style held that buildings were, above all else, meant to be expressions of function — straight, efficient lines of glass and concrete. Venturi didn’t quite agree. “He argued,” Lewis explains, “that the problem with modernism was that it forgot buildings had a job to communicate, to deliver pleasure, and to convey meaning.” Venturi gestured toward history in his designs, outfitting the Guild House with a classical Roman arch on its front facade — only to flatten it completely. (Venturi may have been rejecting “modernism,” but he wasn’t rejecting innovation.) The building’s central column is “grotesquely enlarged” — a reference, Lewis says, to another great Philly architect: Frank Furness. Taken together, Lewis calls Guild House “perhaps the first building that can truly be called postmodern.”

And it’s right there for you to see — still serving its original purpose as a housing complex for seniors — on the 700 block of Spring Garden Street.

Church of Saint James the Less 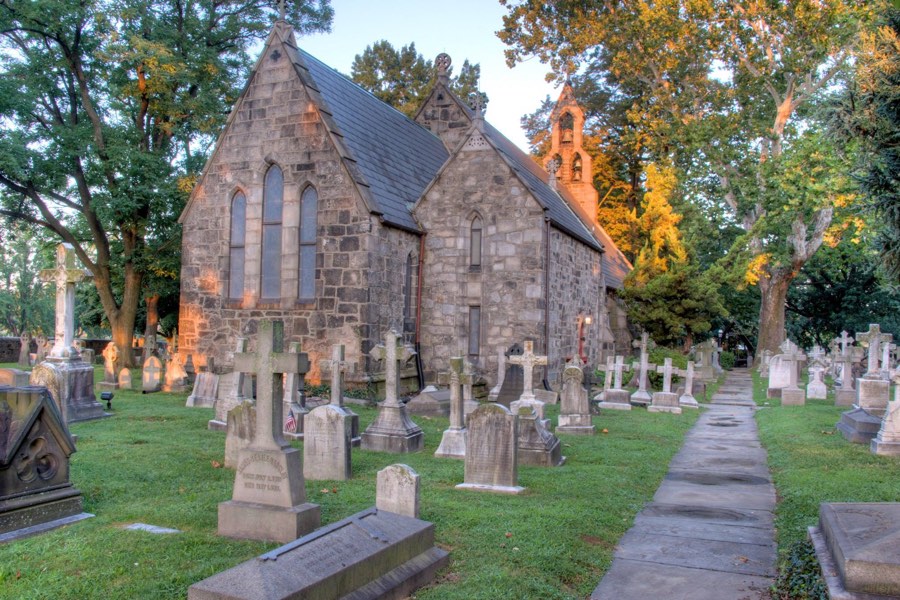 The most famous church in Philadelphia is probably Christ Church in Old City, an indisputably beautiful structure that’s also a postcard of stereotypical Philadelphia.

The Church of Saint James the Less isn’t that kind of church.

Built in 1846, 100 years after Christ Church, this building would look more at home in the English countryside than in North Philadelphia. Which was, in fact, the point. The church’s leaders, wanting to construct a new place of worship, tapped a group of British architects known as the English Ecclesiological Society who were obsessed with Gothic architecture and determined to export the style across the world. The Saint James the Less ministers ended up receiving a set of drawings based on a 13th-century English church, and they followed them to a T. The resulting church is among the first examples of a medieval parish church in the United States.

The church is built in Gothic Revival style, which had more to it than a facile obsession with turrets, spires and flying buttresses. It was a sort of philosophy — a “recognition that Industrial Revolution had coarsened life, modern life. Looking back into the Middle Ages,” Lewis says, “people saw a more organic form of life.”

“It’s wonderfully dark and gloomy in the best way,” he says. The cemetery that surrounds the property adds to that feeling. If you have the chance to go inside, be sure to look for the rare medieval feature called a “rood screen,” which separates the nave, where the public sits, from the chancel, where the clergy give sermons. “These things went way out of fashion in the Reformation, and almost all of them were destroyed,” Lewis says. “That they put in a rood screen is a sign of the uncompromising medievalism of the people who built it.”

Hamilton’s Mansion at the Woodlands Cemetery 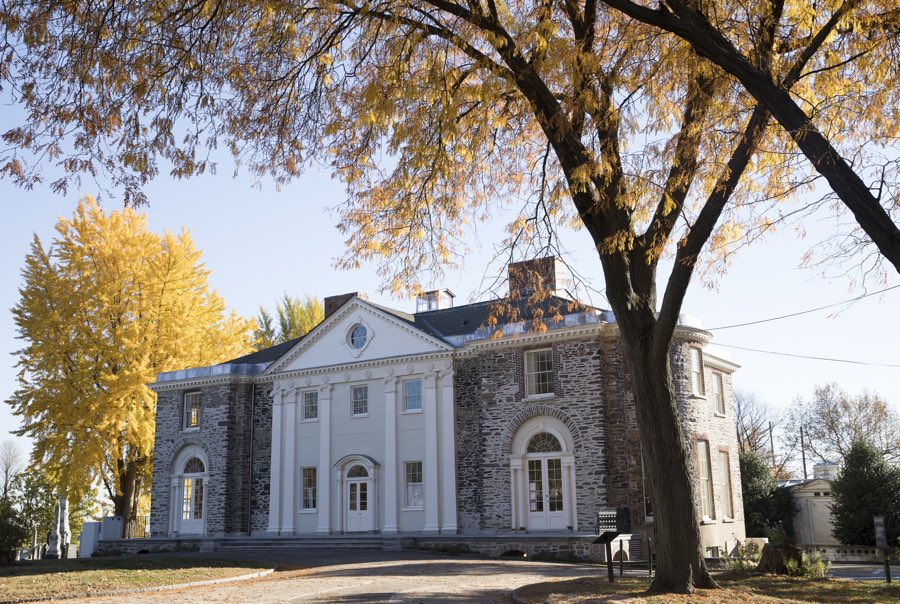 Photo by Ryan Collerd Photography, courtesy of The Woodlands.

Philadelphia has no shortage of beautiful Colonial houses. What makes Hamilton’s Mansion at the Woodlands unique — unlike other great examples of Colonial homes, like Cliveden in Germantown — is the fact that it still retains its former lands, allowing you to really imagine what the property was like in the 18th century, when this part of Philadelphia wasn’t actually Philadelphia, but farmland. “It was an accident of survival, when the Hamiltons sold the property, that it got designated as a cemetery,” Lewis says.

The house itself belonged to William Hamilton, whose grandfather, Andrew, famously argued the first freedom of the press case in U.S. history and, legend has it, was the first person to be dubbed a “Philadelphia lawyer.” What’s not subject to legend is that the Hamiltons were very rich. And when William inherited the family estate in the 18th century, he endeavored, as the very rich are wont to do, to build a great home upon it. What he ended up with, Lewis says, “was at the time the most sophisticated house in America.”

The style is neoclassical — a rejection of the earlier kind of simplistic building construction where each room was more or less the same. “This doctrine held that spaces are like music,” Lewis says. Far from being stagnant or repetitive, a home was meant to have a natural kind of movement to it. The architect took inspiration from Roman baths, whose various rooms had unique spatial designs by necessity, to keep the water at different temperatures. The end result — from the rolling carriage path that would have led visitors to the estate to the house itself — is a kind of mini English manor right here in post-revolutionary America. 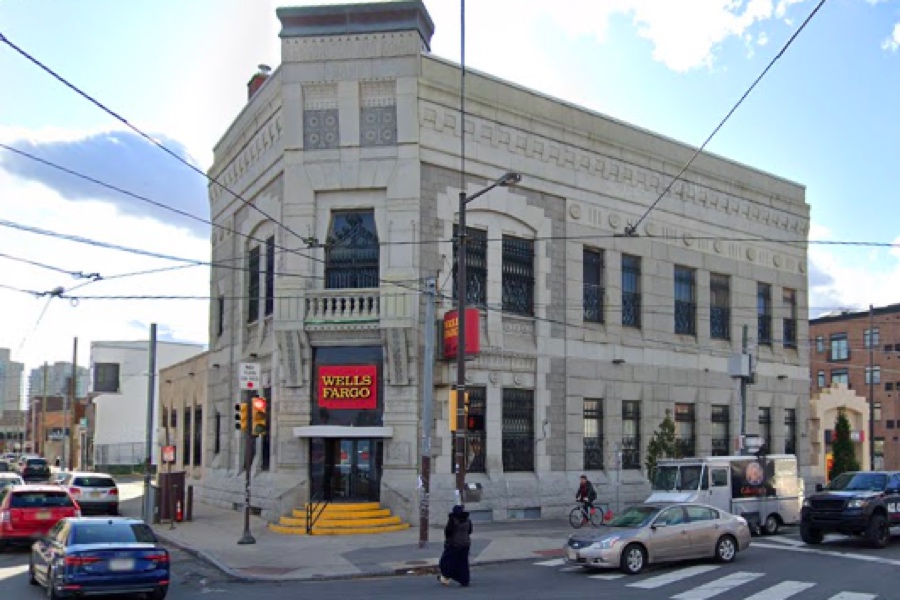 What’s this? A Wells Fargo Bank branch on the list of the most interesting buildings in Philadelphia?

Yes. Because this Wells Fargo was designed by Frank Furness. And Lewis, who wrote a biography of Furness in 2001, says it may be the purest form of Furness architecture you can find in Philadelphia.

It’s a surprising pronouncement, in part because the bank doesn’t really look like typical Furness, which is usually bursting with red brick and wrought iron (like the Furness house in Fishtown recently put on the market for $1.7 million).

Furness, though, actually trained as an architect by learning a different style, popular in Europe in the 19th century, known as Neo-Grec. Unlike Greek Revival, which looked to the Athenian Parthenon as its model, this style, Lewis explains, wished to “copy Greek principles, not Greek forms.” The bank may not look like the Parthenon (or, say, the Second Bank of the United States on Chestnut Street), but it does have a kind of abstracted swirl on its facade meant to reference Ionic columns. And if classical Greek architecture was all about the drama of columns holding weight, this building’s peculiar shape expresses a similar kind of strength. The granite construction, Lewis adds, was meant to evoke a kind of fortress. This was, after all, a bank. (And it still is!)

For Lewis, this building represents quintessential Furness, working in his own style. Those other red-brick buildings, Lewis says, like Penn’s famous Fisher Fine Arts Library, may be beautiful, but they were Furness being “pushed by the prevailing taste.” Not so this building: “This is in a way his purest classical building.” 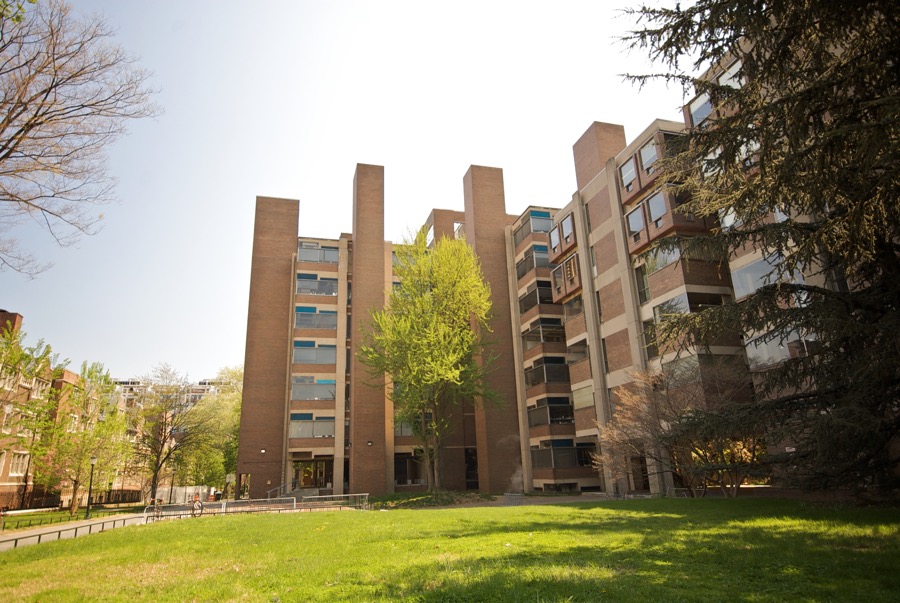 Louis Kahn is a quintessential Philadelphia architect. He went to Central High. He went to Penn. And this building — a scientific research laboratory on Penn’s campus — was one of his masterpieces.

When designing the building, as Lewis tells it, Kahn had a realization: “Scientists are people, and they need to talk and work together. So you need to make spaces for interaction.” One problem: Scientists also need labs — and labs take up a lot of space and have lots of complicated plumbing. Kahn effectively created two buildings in one: The scientists were all placed in the center of the building, while the plumbing surrounded its exterior. Far from hiding those technical features, Kahn embraced them. “Normally, you would pretend the pipe wasn’t there,” Lewis says. “Kahn was saying we have to accept it. Of course you have to produce air, or pollution. Don’t hide it. Show it. Describe it. Make it architectural.”

These days, the lab appears utterly normal in its landscape. Penn students pass it by every day without a glance. “This is the paradox of making world-changing buildings,” Lewis says. “The world changes, and then they blend in. But they don’t blend in when they’re born.”