On the QT: Frank Furness-Designed Townhouse in Fishtown

Built by an embezzling City Councilmember and home for decades to a noted local physician, this one-of-a-kind townhouse can now be yours. 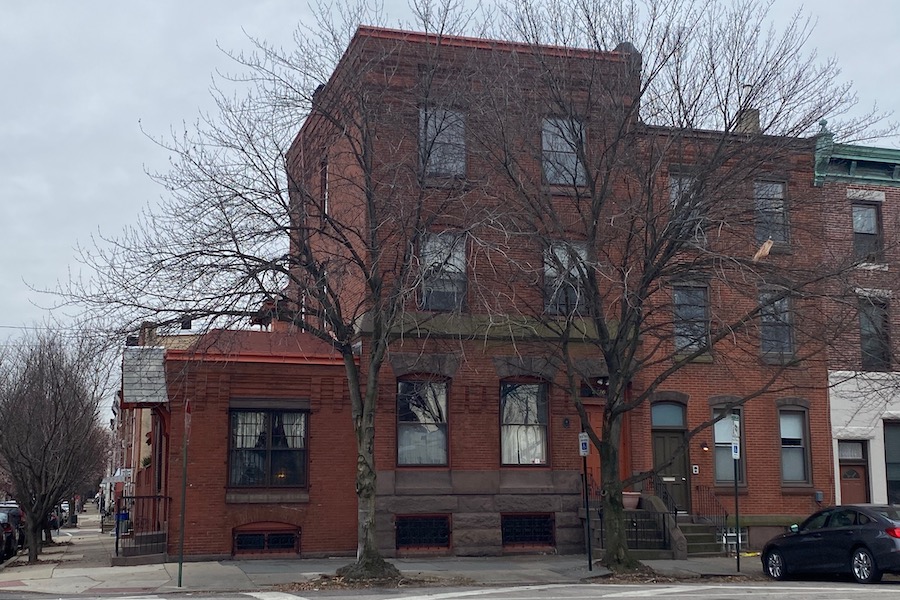 There’s no mistaking this unique Fishtown townhouse for its neighbors. Frank Furness wouldn’t have wanted it any other way, which is why he gave this house its distinctive appearance. It commands its corner at 2176-78 E. York St., Philadelphia, Pa. 19125 | Photos: Sandy Smith unless otherwise noted

Who says that corruption produces no benefit?

If it weren’t for an estate administrator who got elected to the Philadelphia Common Council, then got convicted for embezzling from the estate he administered, you wouldn’t have the opportunity to buy this rare gem — a Frank Furness-designed townhouse for sale in Fishtown.

It has an interesting history, loads of character and a number of uniquely Furnessian details. It’s also surprisingly intact, thanks to the care and attention of a succession of owners.

The first owner was a gentleman named John Ruhl. Ruhl served as the bill collector for the Sepviva estate, one of two tracts of land put together by Isaac Norris in the 18th century. Because Norris’s will prevented the estate from being subdivided and sold in pieces, Norris’s children and grandchildren had to resort to leasing parcels to builders in order to permit Kensington’s continued growth in the post-Civil War industrial boom. 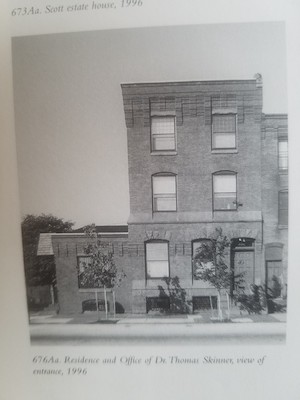 Ruhl’s role in all this was as assistant to the estate’s collector of income, J. Dickinson Sergeant. Ruhl’s job was to collect the ground rent (or the “fee,” to use real-estate speak) from the owners of the houses and turn it over to Sergeant, who in turn handed the money over to the estate’s trustees.

Or that’s how it was supposed to work. Instead, while Ruhl gained the trust of his boss, the trustees and his fellow Kensingtonians, who elected him to the Common Council in 1885, he was busy skimming money from the estate, his boss and several local building associations — more than $30,000, a princely sum in s 1887, when he was charged with embezzlement. An 1888 newspaper report blamed Ruhl’s behavior on his gambling addiction; he had run up debts of some $100,000. 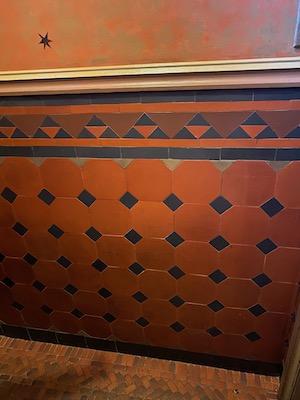 In response to the charges, Ruhl fled the city in February 1888, only to return in March to face the music. He was sentenced to three years in the county (city) prison and lived the rest of his life in obscurity in far North Philadelphia. His Kensington property was deeded to Sergeant for the sum of one dollar. Sergeant then turned around sold it to prominent physician Thomas Shriner.

In between the time Ruhl got his hands on the property and the time the court took it from him, he built this beautiful home and office in 1886. While the original property records have been lost, this house is attributed to Furness, Evans & Co., and it appears in the photo book Frank Furness: The Complete Works.

The house and office offer a well-preserved example of Furness’s approach to the Queen Anne style that was popular in the Gilded Age. But where most Queen Anne houses were fluffy concoctions of turrets, gables and peaked roofs, this house bears the muscular, vigorous Furness touch. 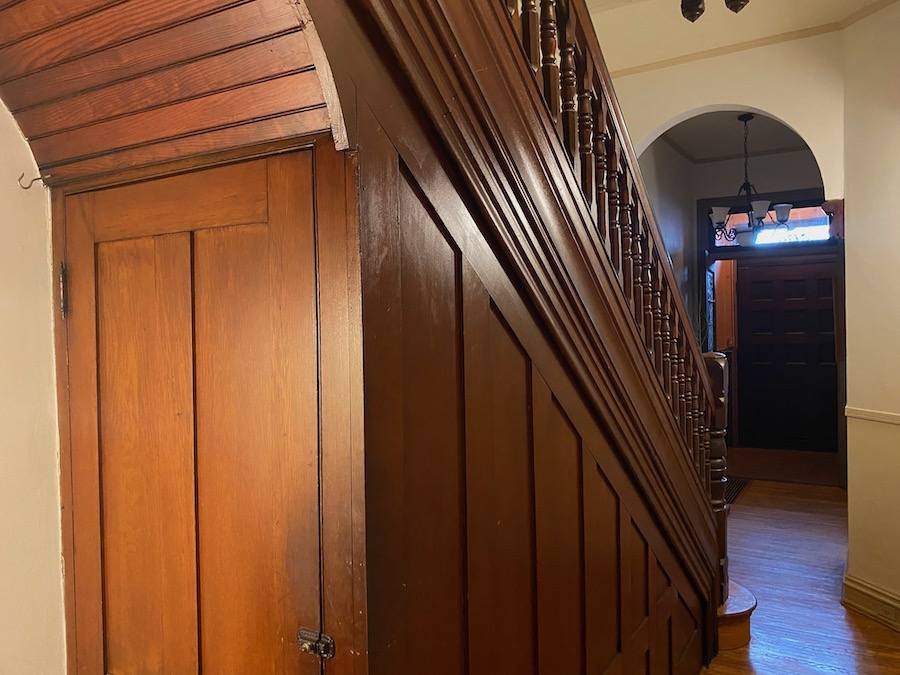 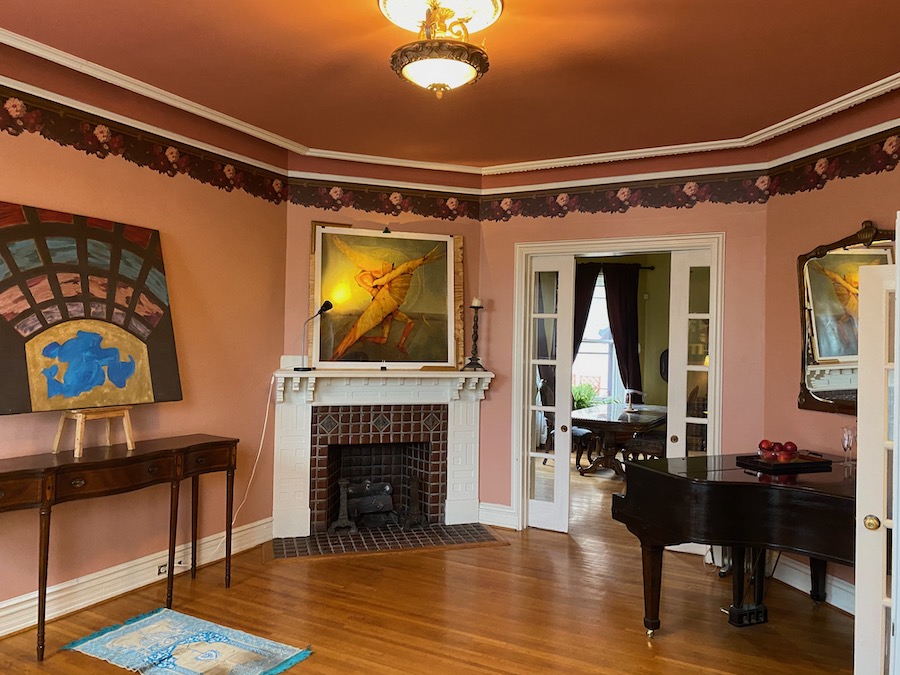 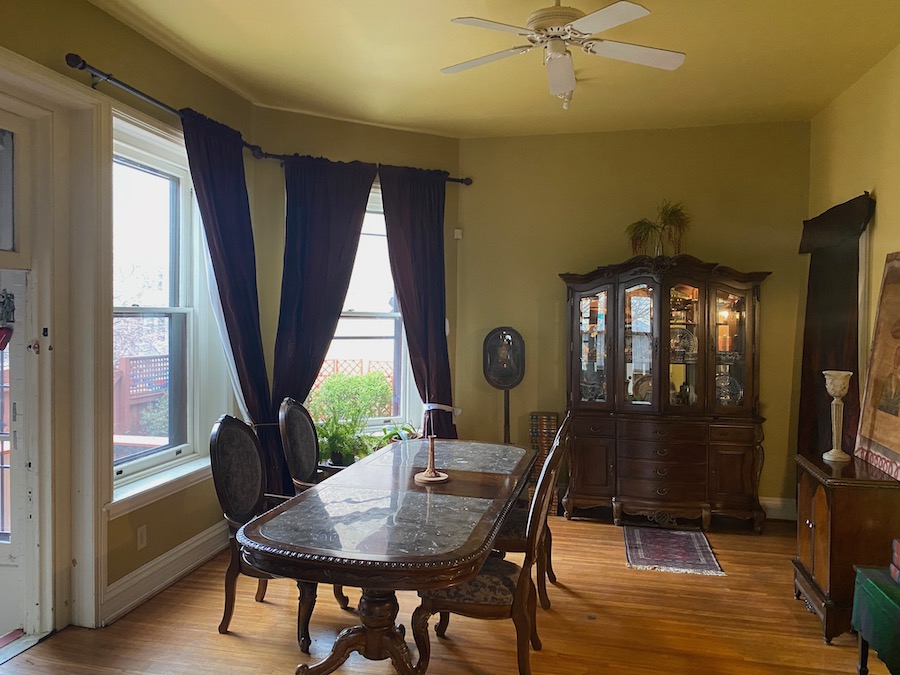 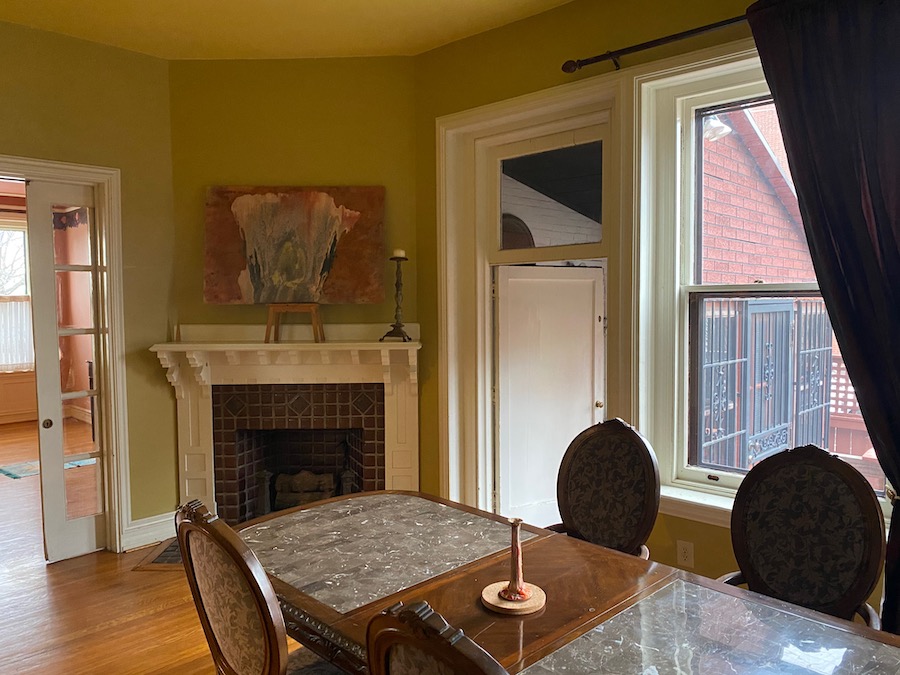 As on the outside, so on the inside: Its interior architecture and design elements all display the genius of the master whose work paved the way for modern architecture. And as these photos should make clear, those elements have been very well preserved. From the tile work in the vestibule to the staircase in the foyer to the matching fireplaces in the living and dining rooms to the armoires and closet doors in the bedrooms, Furness’ eclectic taste and assertive style permeate this house. 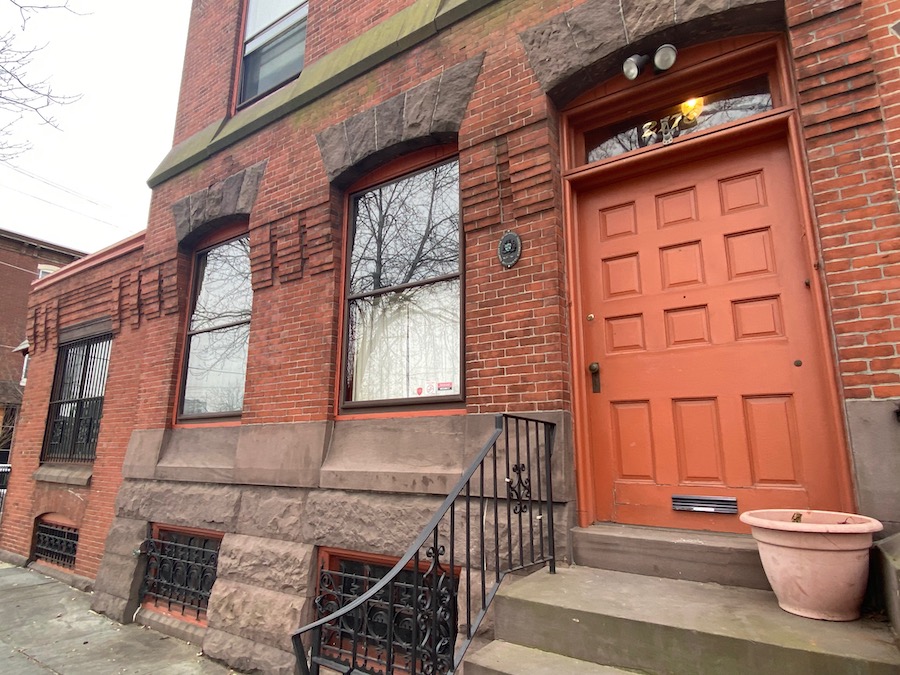 And it stands out from the others that surround it, says its current owner, Julie Sabur. Starting with its front door: “We have the biggest front door on the block, and he [Furness] had the biggest ego.” Which would have made him the perfect architect for a man on the make with an ambition to show off his status. 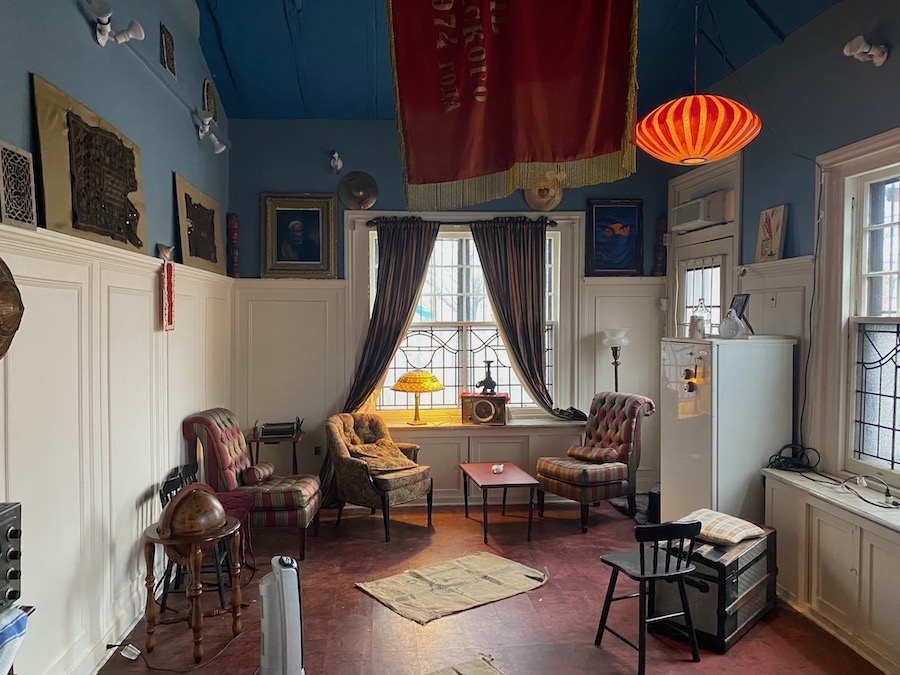 Ruhl ran his real estate business from this room in the one-story wing attached to the main house, and Shriner ran his medical practice from this same room until his death in 1915. Currently, it functions as a bonus room, and Sabur has decorated it with an eclectic collection of objects from several different countries and eras. But as it has its own entrance on Sepviva Street, it would make a perfect office for a work-from-home professional who wishes to meet clients without having them go through the house first. 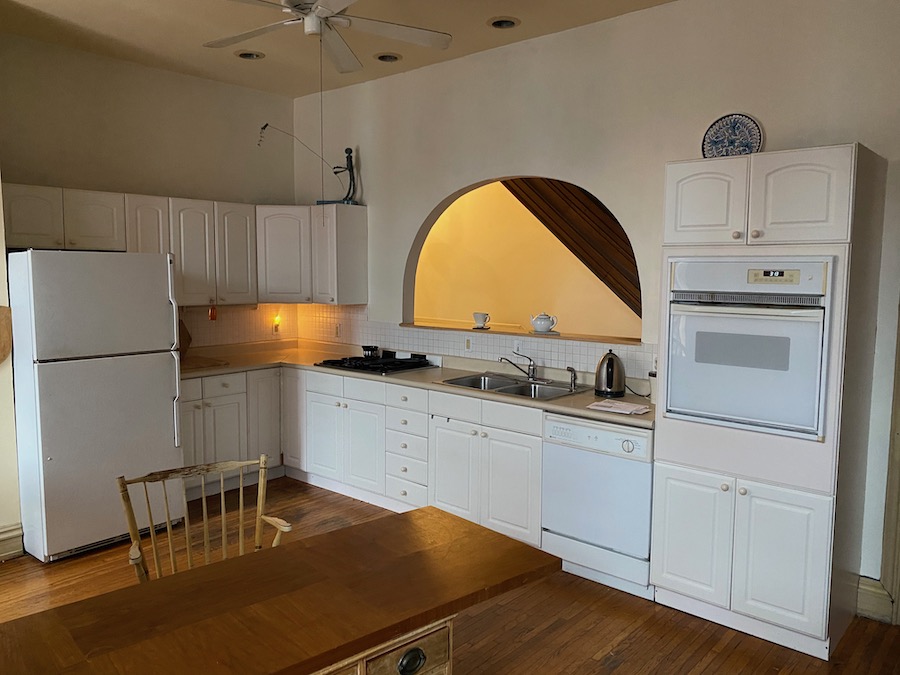 There have been a few significant alterations made to the house, all of them before Sabur bought it in 2004. (We featured this house in our Real Estate Issue that year.) The biggest one moved the kitchen from the back of the first floor to the large room in the middle of the second floor. That move gave the kitchen enough room to serve as an eat-in space and even accommodate a work desk. 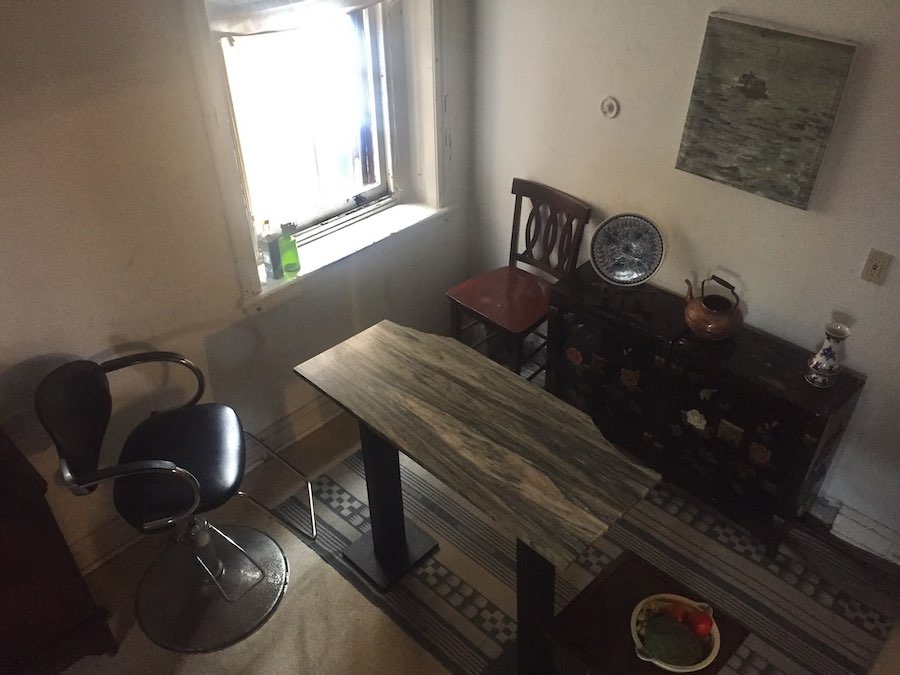 But if you plan on entertaining in the formal dining room often, you may want to give some consideration to returning its original kitchen to its first use. You will no doubt want to bring the built-in Furness pantry back up to snuff when you do. 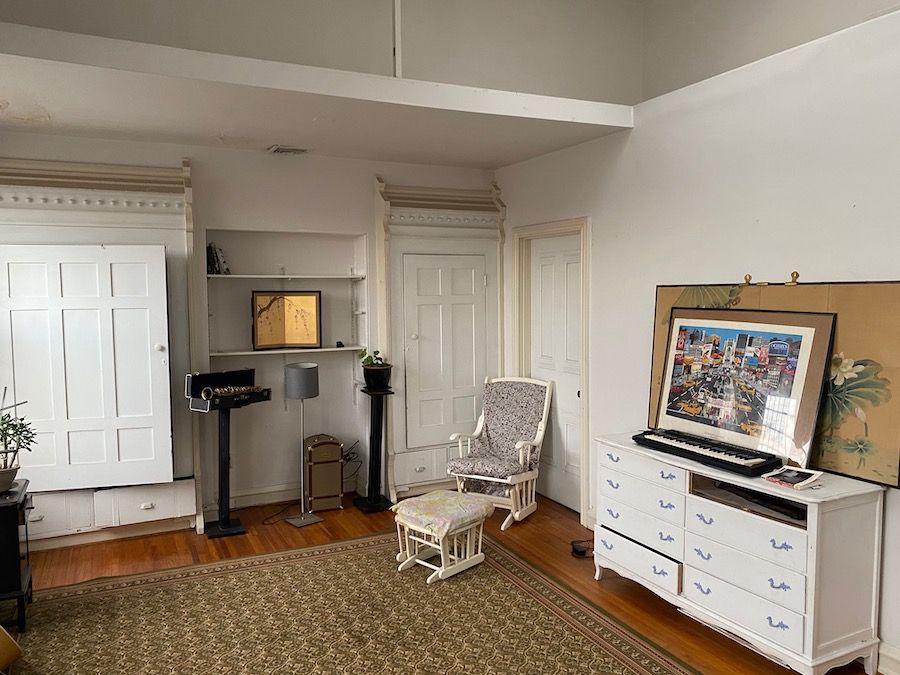 The second significant alteration added skylights and a loft space to the front bedroom on the top floor. Because of this, the room would make a great artist’s studio. Sabur’s partner, raconteur and musician Declan O’Brien, uses it as a studio at present. 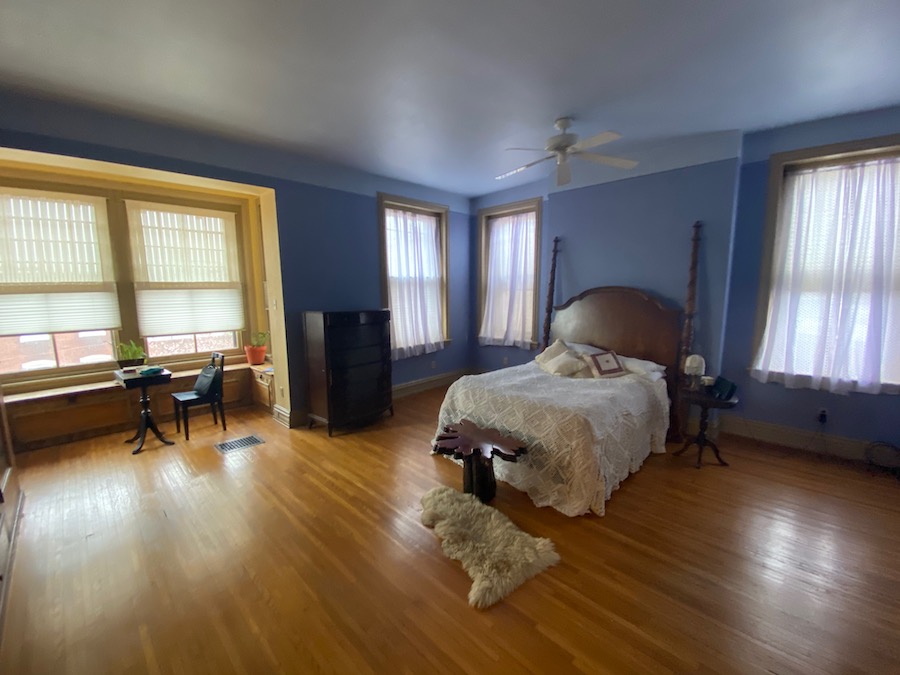 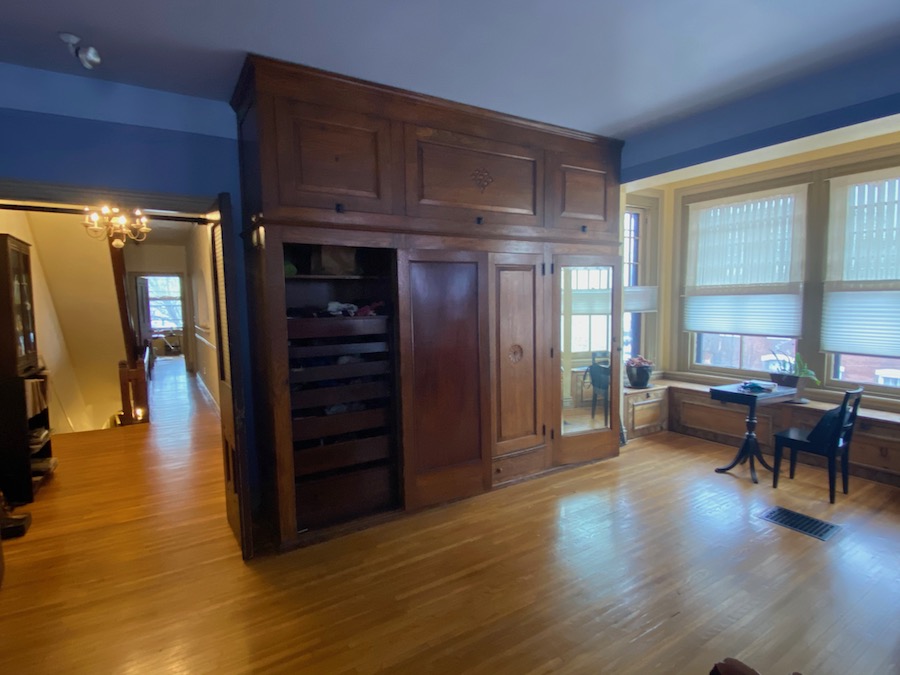 “I tried to design this house to make the architecture the main focus,” says Sabur, who especially likes the fireplaces. But, she continues, “it’s really hard not to clutter things up.”

Somehow, however, she managed to avoid doing that. As a result, the house’s rooms all feel very spacious. 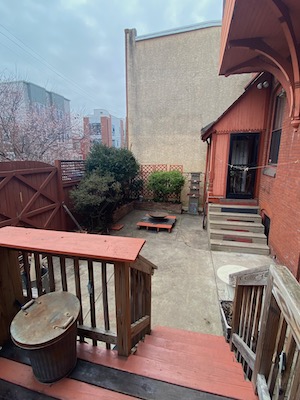 So does its charming side courtyard, which has entrances from both the main house and the office.

Yet even though it’s spacious and light, it’s also massive — another Furnessian trait. “If you only needed to use a two-by-four, he would use a four-by-eight,” Sabur says. “Every door had to be bigger and better. And from what I understand, it’s in keeping with his talent, imagination and design.”

And what that means for you, the buyer, is that you’re getting a house that was built to last, in sharp contrast to many of the houses being built today. It’s ideally suited for today’s work-from-home lifestyle, and it’s roomy enough that you could turn it into an Airbnb — or even an actual B&B. After all, it has that unique charm bed-and-breakfast guests absolutely love.

This house lies near Fishtown’s northeast corner, in the area where it overlaps with East Kensington and Port Richmond, a zone some wags call “Port Fishington.” It’s across the street from the Horatio Hackett School, one block from Konrad Square Park, and also one block from Frankford Avenue at the point where Trenton Avenue crosses it.

And when you want to leave Fishtown’s cozy confines, you can either catch SEPTA’s Route 5 bus on Frankford Avenue or the Market-Frankford Line at York-Dauphin station, a six-block walk from here. (Though you might get sidetracked on the way and pop into Martha instead.)

This means that both the lively dining and shopping scene along the Fishtown stretch of Frankford Avenue and convenient transit are just a short walk from your front door.

And it’s a mighty impressive front door, too. So is the historically certified Frank Furness Fishtown house for sale behind it.

OTHER STUFF: This house, at 2176-78 E. York St., Philadelphia, Pa. 19125,  is not listed on the regional multiple listing service, as Sabur is handling the sale herself. Interested parties should contact her directly via email to casafurness@gmail.com or by calling 267-551-1805.