Last winter, Jethro Heiko tapped the solitary maple tree in his backyard. This winter, he’s up to 40 trees all over the neighborhood. 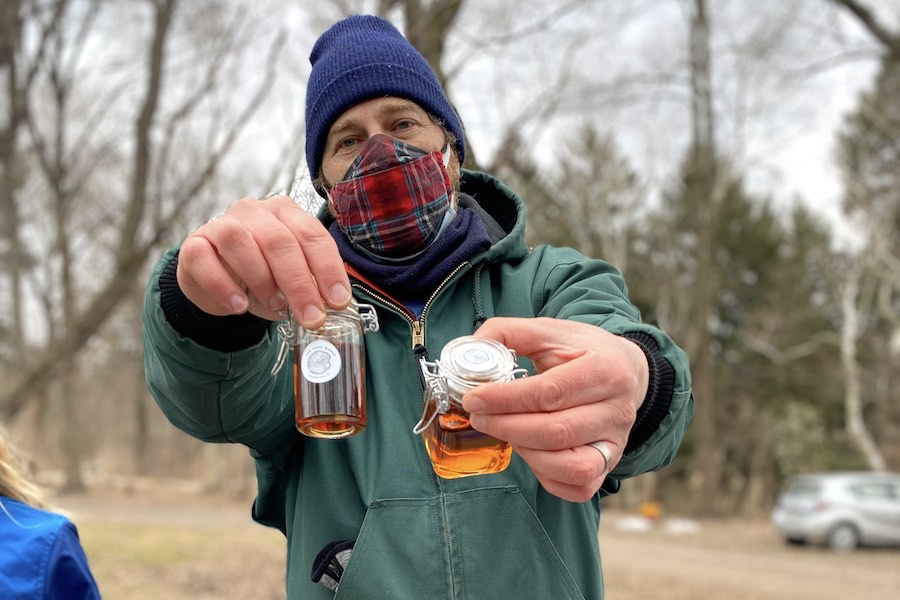 In 2018, which seems like a lifetime ago but really wasn’t, Heiko, his wife and their two kids moved from their cramped and concrete Fishtown surroundings to the much more leafy neighborhood of East Oak Lane in the northernmost part of North Philadelphia. After settling in, Heiko’s wife realized that the big tree in their new backyard was a sugar maple, which happens to be one of the best types of trees for producing syrup. On a whim, she bought Heiko a tree-tapping kit online.

And in February of 2020 — prime maple-tapping season — Heiko tapped his solitary sugar maple, enlisting his two kids to help. And his family was soon eating pancakes and waffles topped with their own Philadelphia maple syrup.

Then came COVID. Heiko, whose background is in community organizing and engagement, left a business he started 16 years prior, thanks, in part, to the pandemic. His kids, who attend Independence Charter School, went virtual. And with the winter of 2020-21 approaching, Heiko suddenly found himself with lots of time on his hands.

As the rest of us were still trying to perfect our sourdough or adapt to online schooling, Heiko started reading all he could about tree-tapping. And as he traveled around East Oak Lane and into other parts of North Philly, he realized there’s an abundance of maple trees in Philadelphia. An untapped market, if you will.

So Heiko began knocking on doors. He’d walk down the street, spot a maple in somebody’s yard. And he’d ask them if they wanted to learn how to get maple syrup out of their trees. One after another, they said yes.

“People were really surprised to learn they could do this,” says Heiko, who is now 48. “One person was almost angry that he was living there all this time and had no idea he could make his own maple syrup.”

He also reached out to South Jersey’s Stockton University. In 2020, the school received a three-year United States Department of Agriculture grant to promote maple syrup-making in the region. Stockton told Heiko if he continued with his endeavor in North Philly, they’d support him with supplies and the boiling required to make the final product. (More on that later.) Of course, that means that heavy vats of raw sap have to make the nearly hour-and-a-half journey from East Oak Lane to the school, where the boiling takes place.

Before he knew it, Heiko had worked with the community to tap 40 maple trees in North Philly and at Germantown’s Awbury Arboretum over this winter. Under his arrangement, community members are compensated with maple syrup for the use of their trees and their help. Heiko calls them shareholders. And then he sells some of the maple syrup at fundraisers for community organizations and also to cover some of his costs.

Heiko insists he’s not making any money off of the project. Quite the opposite. When he considers all the time and effort he’s putting into educating the city about its maple syrup resources, he’s sure he’s on the losing end.

“But this is all about community building,” he says. “I’m just trying to raise awareness and educate people about what is literally in their backyard.”

Tapping your own maple tree is really simple, explains Heiko.

First, you need to find a tree. Duh. Philadelphia is home to several varieties of maple trees that will bear forth syrup. And you can tap black walnut and birch trees as well. The best time to do a little tree identification is in summer, because trees are easiest to identify by their leaves.

Once you’ve found your tree, you want to make sure it looks healthy. And nobody is suggesting you tap young, fledgling trees, a.k.a. saplings. The bigger the better.

The tapping itself involves drilling small holes at an angle into the tree, installing the taps, and connecting those taps to buckets via a hose. 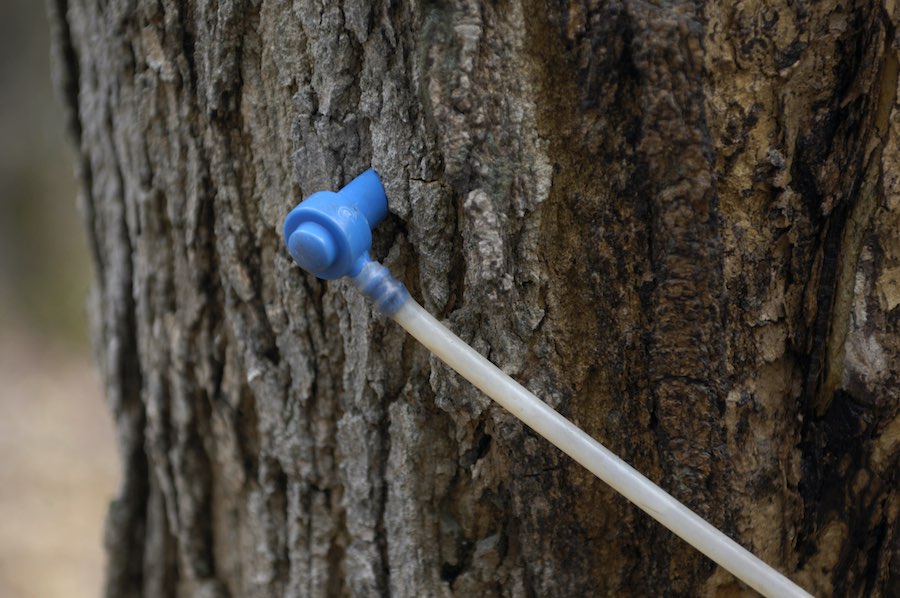 A maple syrup tap in a tree. Photograph via Getty Images

The sap will naturally flow out through the tap and into your bucket. There are lots of people who get into soil testing and buying all sorts of fancy equipment, but to your average backyard hobbyist, the tapping can be as simple and inexpensive as you want it to be.

But then, you have to boil the sap to allow the water to evaporate. What’s left behind is the sugary syrup into which you dip your French toast sticks. The sap contains a very small amount of sugar, a few percentage points at most. So you might have to collect (and boil) 30 gallons of sticky, messy sap to yield one gallon of syrup. The boiling process is, as Heiko puts it, “laborious.” 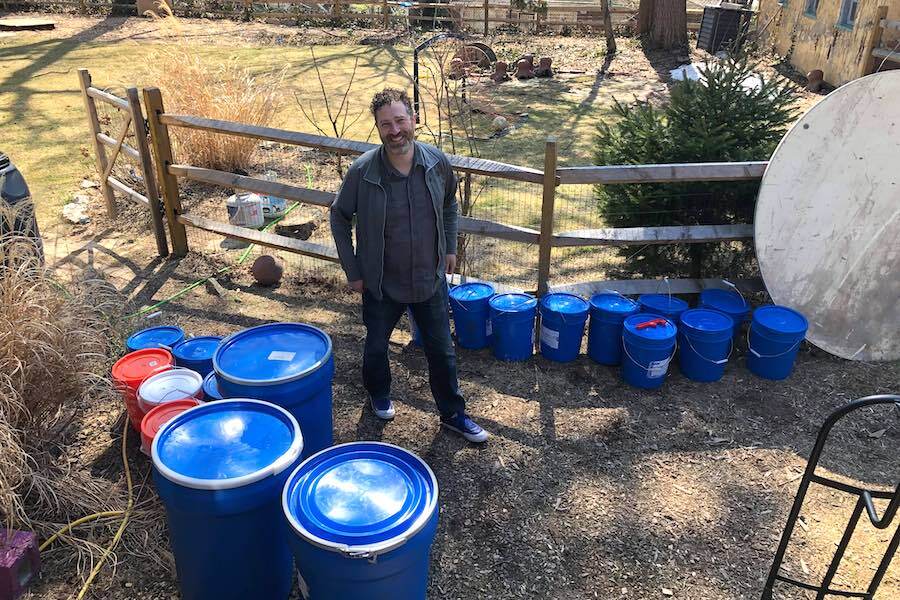 And once the season has ended, which occurs when the freeze-thaw cycle in Philadelphia is over, your taps dry up and it’s on to next year.

In Heiko’s house, the effort is very much a family affair. His daughter Hazel, 12, makes maple-glazed donuts, maple candies, and maple ice cream. Orson, his 10-year-old son, is heavily involved in collecting the sap. And Heiko’s wife, Chelsea, gets the thankless and thoroughly unglamorous task of helping Heiko lug big buckets of sap around.

And the whole family participates in some of the community events, where you can sample and buy the Philadelphia maple syrup. On March 20th, Heiko is teaching a maple syrup workshop for the Fairmount Park Conservancy. And on April 10th, he’ll lead a maple tree walking tour in East Oak lane.

“They sold half the first day,” Heiko says, proudly.

Philadelphia Maple Syrup on the Rise

While Heiko may be leading the Philadelphia maple syrup charge, he’s not the only one in the area to have discovered this obsession during the pandemic.

One West Philly resident we talked to has been experimenting this winter with tapping maple trees in a wooded area near his home. He asked to remain anonymous, because it is his impression (and Heiko agrees) that the city doesn’t permit just anyone to walk into the Fairmount Park system and drill holes in the trees. The anonymous tapper says he tapped four trees and that they just stopped producing last week.

And out in Delco, Newtown Square resident Jack Callahan ordered a tree-tapping kit online earlier this year and set out with his kids to tap their maple tree. 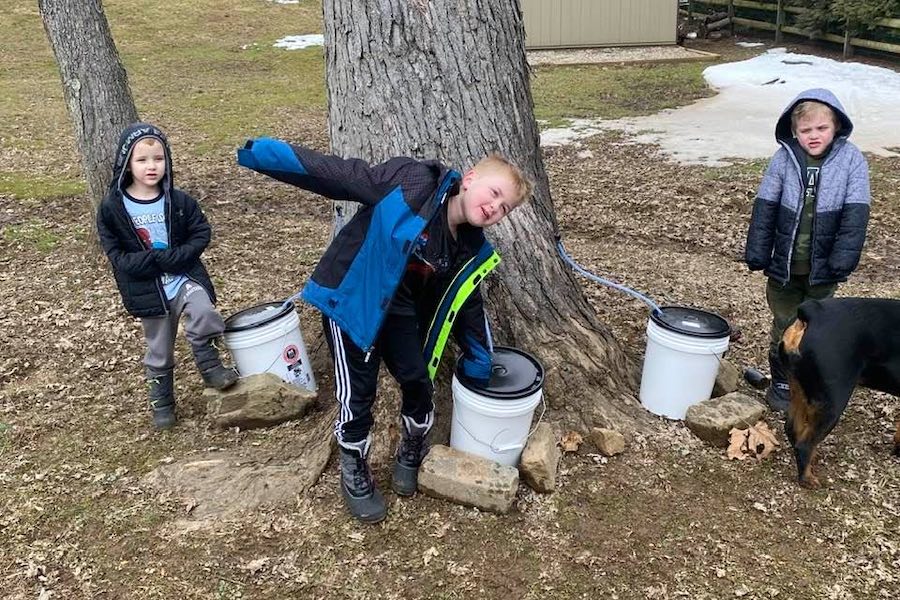 Callahan says he spent about $25 on the initial tapping kit. Then he recently dropped $35 on a hydrometer, which allows him to measure the sugar content of the sap. There was also a $3 drill bit, because he didn’t want his regular drill bit to get all sappy. A food-safe bucket from Home Depot. And a friend just gave him a big outdoor turkey frying setup for the boiling. 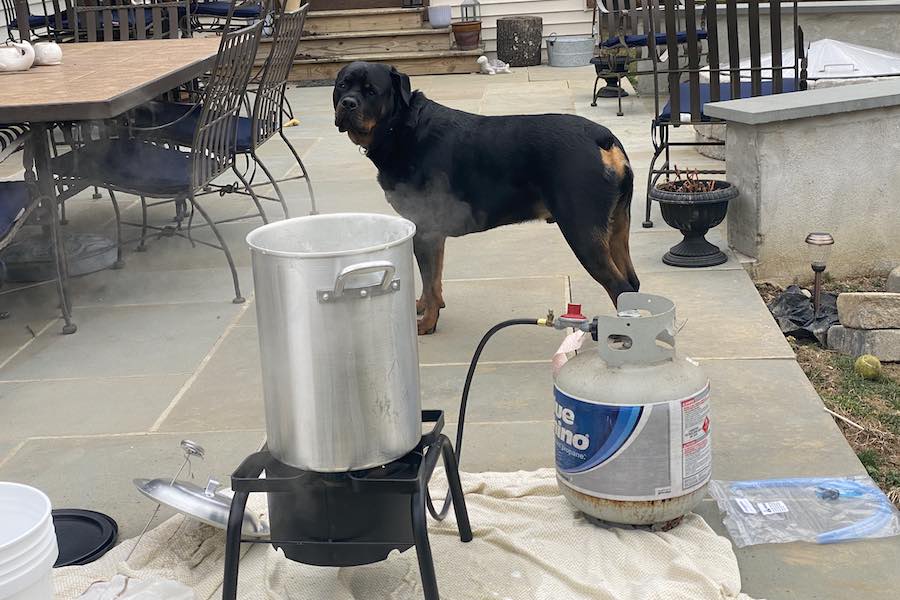 Callahan lives next to a church, which has maple trees on its property. And he’s thinking of asking them if he can tap some of their trees next winter.

As for Heiko, his efforts this year seem to be so successful that we would have just assumed that he’ll continue to expand next year. And that is his hope.

When you have 40 maple trees to tap (and potentially many more next year) and they’re each producing as much as ten gallons a day over a two-month period, all of which has to be kept refrigerated before being boiled, that’s a heck of a lot of refrigeration and boiling.

Stockon has been helpful, but it’s far away. Heiko says he really needs to partner with a Philly institution — a high school, a college — or community organization. The ideal candidate would have maples on its property that it wants to tap, some students or other volunteers who aren’t afraid of hard work, and a commercial kitchen for the boiling.

“And lots of fridge space,” Heiko reminds us.