Paul Ezell, a former Havertown ophthalmologist and the subject of a 2020 Philly Mag profile, went to jail in 2014 for growing marijuana that he's always maintained was for his dying wife. If the Governor approves the pardon, Ezell will be one step closer to getting his medical license — and his life — back. 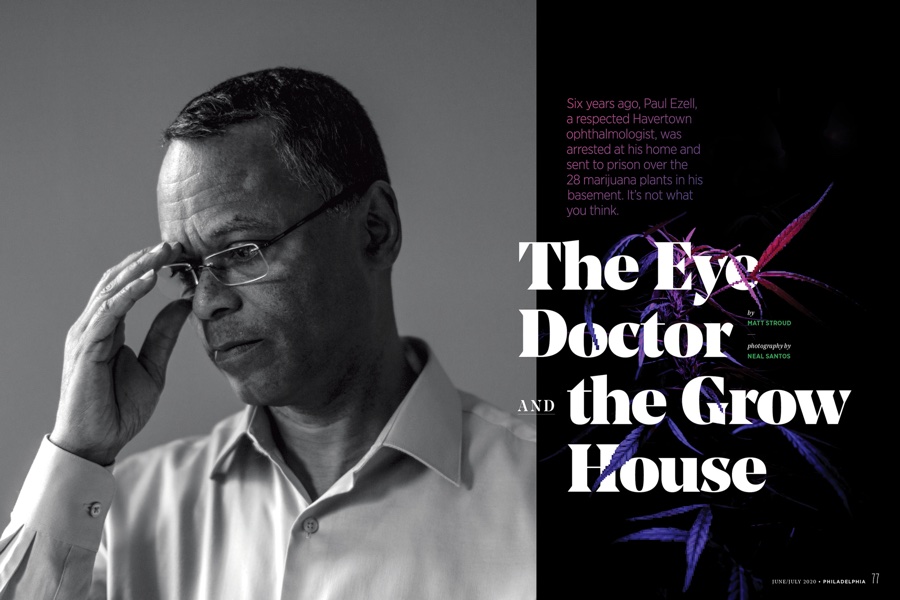 Today, the Pennsylvania Board of Pardons recommended that Paul Ezell’s application for a pardon be approved and sent to Governor Tom Wolf. If Governor Wolf signs Ezell’s pardon, it will be a major milestone in the nearly seven-year saga that ended the doctor’s three-decade medical career.

Philadelphia profiled Ezell, a Havertown ophthalmologist who grew marijuana in his basement, last summer.  He has always maintained that he grew the plants to help his dying wife get off the opioids she’d been prescribed for a host of medical issues. After his wife’s death in 2014, Ezell began to dismantle and discard his pot-growing setup, at which point clippings were discovered, leading to a police raid. Based on a tip, the government alleged that he’d been growing the plants to sell them to his patients, but that was never established or charged. Ezell was arrested in 2014 and eventually pleaded guilty to a felony — manufacture, delivery, or possession with intent to manufacture or deliver a controlled substance. He served six months of a maximum 23-month sentence in the George W. Hill Correctional Facility in Thornton before being released for good behavior. Though Ezell is now free, the felony plea means he can’t practice medicine. A pardon would clear his record.

On Wednesday, Ezell testified in front of the Pardons Board in a public hearing. Though members were supportive his case, they questioned him about $721 he still owed in fines and fees related to his conviction. Ezell sent the board a receipt Friday indicating that he’d paid off the remaining balance, and the board voted 3-1 to recommend the pardon to the Governor.

At the hearing Wednesday, Ezell was asked if he plans to pursue medicine again.

“That’s my profession, my whole life,” he said. “Yes, the answer to your question is yes.”

Lieutenant Governor Jon Fetterman, who chairs the Pardons Board, spoke on behalf of Ezell’s case to Philadelphia last year. Today, he expressed support for the decision.

“What happened to Ezell was a grave injustice,” Fetterman said. “I’m grateful for the board’s decision to see the merit of Dr. Ezell’s case, and I hope he’s able to return to medicine and to rebuild his life.”

Board member John Williams recused himself from the vote — for unknown reasons — and Harris Gubernick voted against Ezell’s application. Ezell only needed a majority to send the application to the Governor’s desk. There’s no current timetable for Wolf to take up the board’s recommendation.

Paul’s daughter, Victoria Ezell, who lost her nursing license as a result of the case, is scheduled to have her pardon hearing next month.