Yes, there is distrust of health care in the Black community, but Ala Stanford's big Liacouras Center event proved that if you remove the barriers, people will get the shot. 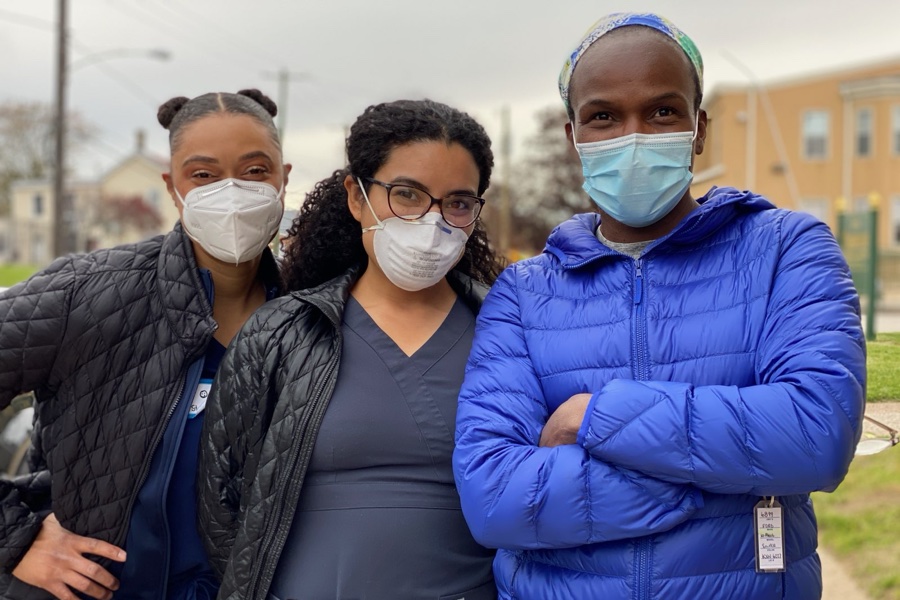 As the saying goes: If you build it, they will come — and last weekend, with its 24-hour “Vaxathon,” the Black Doctors COVID-19 Consortium built it.

Over 4,000 COVID-19 vaccine doses were administered between Friday afternoon and noon Saturday at the Liacouras Center event. Shots were given to people 75 and older from any zip code in the city and to Philadelphians in the 1B category who live in the 20 zip codes hit the hardest by the pandemic — no online registration or advance booking needed.

The purpose of the unconventional event was to increase vaccination numbers among Black Philadelphians, who had received roughly 21 percent of the vaccine doses administered thus far in the city despite making up 42 percent of Philly’s population — the city’s largest racial demographic. (Compare this to white Philadelphians, who represent 40 percent of the population and have received around 54 percent of the doses.) Ala Stanford, the head of the BDCC, knew the Vaxathon could help close the gap for this vulnerable community, but even she didn’t anticipate just how well it would work.

“I was surprised that there were over 1,000 people lined up before we started — that despite the weather, people showed up in excess,” Stanford says. Later analysis showed that 75 percent of the people vaccinated were people of color, and more than 60 percent were Black. “I hope the world recognizes that in Philly, Black people are not reluctant about receiving the vaccine,” Stanford says.

The event revealed another side to the narrative about Black Americans who, scarred by a history of racist medical malpractice, are hesitant to get vaccinated. The media, including myself, have spent a lot of time discussing institutional distrust. And while it’s true there are a lot of Black people who may be wary of the vaccine, it’s also true that many are clamoring to get it, only to be met with obstacle after obstacle.

Based on my experience receiving both of my vaccine doses from the Black Doctors COVID-19 Consortium, I suspected that demand for the Vaxathon was going to be intense. When I documented my inoculation process on social media, I received lots of questions from friends and community members, some of whom were curious about the vaccine and some of whom were suspicious. Yet each time I went to Deliverance Church in North Philly for my doses, I also I saw the kinds of lines you tend to see for concert tickets or the new iPhone. But instead of teenyboppers and techies, those waiting were mostly working-class Black people trying to live.

It’s undeniable that the medical community needs to rebuild trust in the Black community. But Stanford’s work proves that people can walk and chew gum at the same time. Getting vaccinated doesn’t mean you shouldn’t continue to hold medical institutions accountable — just like voting doesn’t mean you stop scrutinizing elected officials. But this can only happen when vaccinations are more accessible and equitable in vulnerable communities, which in turn will help overcome stigma much faster.

“The barriers to Black people getting vaccinated faster are pharmacies not being in their neighborhoods, and many may not have primary-care doctors,” Stanford says. “As physicians are reaching out to their patients, Black people are not on their lists of people to call to come in and receive the vaccine. It is challenging to navigate where the vaccines are available and if they meet criteria. The word of mouth in the Black community is paramount. That is how the word gets out.”

And Stanford got the word out. She was intentional in running her Vaxathon clinic in an area that was accessible to Black neighborhoods and countering stigma with accessibility. And she listened to those who had fears. Research shows that while Black distrust of the health-care industry remains strong, the presence of Black doctors and clinics in vulnerable communities can combat that distrust.

With a shift in her organization’s approach, Stanford was able to make what has felt like a burdensome process accessible, and once those barriers to entry were gone, people showed up. Getting a vaccination shouldn’t feel like applying for social services — it should be a one-stop wham-bam-that’s-it-you’re-all-set experience. That’s how both of my vaccination appointments went. Once my name was called, I was in and out without breaking a sweat. This should be everyone’s experience.

Yes, we have a lot of work to do to overcome stigma. But part of that work is just providing easy, accessible, high-quality care for Black people from day one. Ala Stanford did just that — she built a system that treated Black Philadelphians with dignity and compassion. And they came, standing in line for hours in the freezing cold in North Philadelphia, waiting patiently for a chance to save their lives. It’s why I’ve come to see Stanford as the Stacey Abrams of COVID vaccinations — a Black woman who has proven that a racial gap can be closed with a personal, grassroots approach.