After 20 years of owning a car in Philadelphia, I finally picked a side in the no-savesies war. Find your own damn spot. 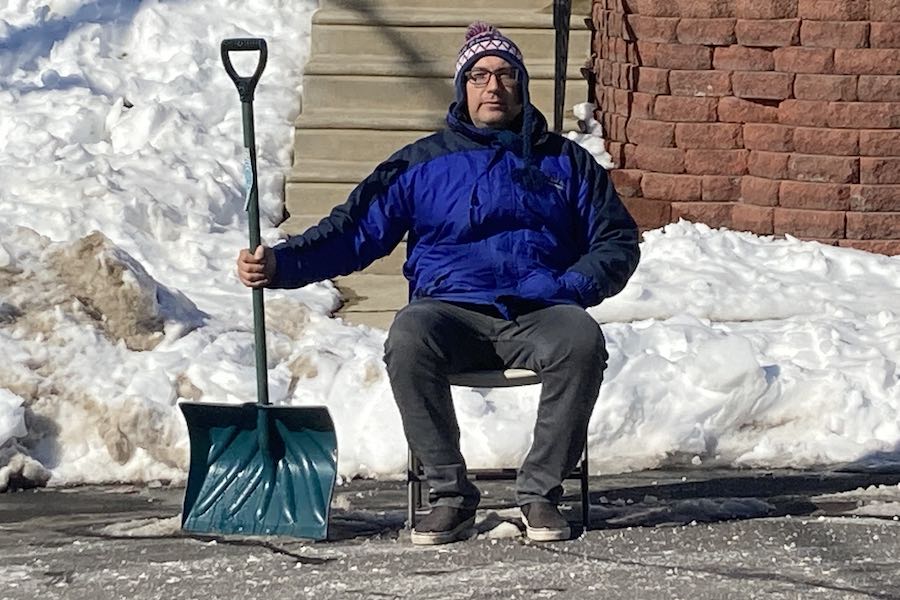 The author, saving his spot in Philadelphia after the snowstorm.

This week’s snowstorm — and I use the word “snowstorm” without any air quotes or sarcasm for what was actually an impressive system worthy of the classification — brought a lot of joy to a lot of people. And not just the hyperventilating TV meteorologists and their ratings-keepers.

For one thing, some right-thinking schools made the choice to give all kids — even kids in virtual schools — a real live snow day on Monday, in a world where some of us have worried that the advent of mass virtual learning meant the end of snow days for all eternity. Sledding and snowperson-building ensued.

And from the looks of my Facebook and Instagram feeds, it seemed like those of you who weren’t sledding (or supervising sledding) at Cobbs Creek Golf Course or Belmont Plateau or any of the scads of other awesome sledding spots around Philly were just blissing out over gorgeous winter-wonderland vistas.

From the friend posting photos of a snow-blanketed FDR Park in South Philly to the one on a precariously curvy back road in Lower Merion, in awe at her towering evergreens with their icicles and powdery covering, there were lots of precious, or at least Instagrammable, moments.

It was all so joyful and pretty. Until it wasn’t.

WHEN WE WOKE UP ON TUESDAY, reality began to set in. School, at least for my kids, was virtual. No second snow day to be had. A return to bits and bytes of screen-glare education. Harrumph.

And here in West Philly, where we live, the glistening white streetscape had been replaced by sooty piles of plowed snow, slush and ice, all forming a prohibitive barrier to anyone trying to get a car out — somebody like me.

This wasn’t simply a matter of “cleaning off the car.” That plowed wall sat overnight, becoming what I will (hyperbolically) describe as a solid block of ice.

I chipped away and chipped away, carrying each heavy shovel-load to a safe spot where no complaint-prone neighbors (I have several) could whine that I was dumping “my” snow in front of their houses. (There’s one who likes to send me texts about the handful of leaves that winds up on her property, supposedly from a tree on my property, even though there are lots of other trees in the neighborhood.)

I did the move where you let the car run for 30 minutes, heat blasting, to aid in thawing everything out, though I’m not sure how well that works. All told, it took me about an hour of heavy labor to get the car into a position of having a reasonably high probability of making it from the shoulder and onto the roadway. That was Tuesday. Then came Wednesday.

EVERYBODY IN MY HOUSE WOKE UP LATE, of course. I looked out the window, and thanks to snow that had fallen subsequent to my Tuesday shoveling, thanks to more plowing by the streets department, and thanks to lots of drift, it was immediately apparent that I needed to do more shoveling around the car.

The clock told me two things:

Begrudgingly, in my pre-coffee fog, I stomped outside, in my pajama pants no less, and started shoveling again, feeling like I was playing some Chevy Chase role in a movie about a middle-aged dad trying to cope with the annoyances and responsibilities of everyday life.

All drama and questioning of my life’s choices aside, I met the deadline.

The gals were in the car at 8 a.m., and for the briefest of moments, I was overcome with a sense of accomplishment, looking at that perfectly rectangular spot I had dug out. It wasn’t sloppy or rushed like some of the amateurish attempts around town. It had sharp edges — a real masterwork. After patting myself on the back, I went inside to make coffee. A well-deserved reward.

But as I waited for my percolator to perc, any sense of accomplishment I had began morphing into a sense of fear, a bit of dread. What if, after all that hard work, somebody stole my spot?

THERE IS, OF COURSE, A LONG HISTORY OF ANGST over spot-saving in the Philadelphia area. Conflicts over this sort of thing have actually resulted in injuries and murder. The police like to remind us each year that spot-saving is illegal. One local township actually threatened to fine residents up to $1,000 (!!!) for sticking cones in spots they had dug out. But I never really took a side in all this. Never really had to.

It’s not like we get a lot of actual snowstorms in Philly, so there aren’t that many opportunities to confront the issue. And I feel like when we have had snowstorms in Philly, at least in relatively recent memory, we’ve been lucky to have warm enough temperatures follow in the next few days to allow nature to run its course. Or I just didn’t need the car anytime soon.

But this time was different.

First, everything is different thanks to COVID. Tempers are short, stress is high, and the idea of adding more stressful activities to my to-do list, e.g., “Spend another hour shoveling my car out after somebody stole my spot,” wasn’t exactly helping.

Second, there was a real practical need for me to retain that spot. After my wife would return from her COVID vaccination, she needed to park, come in the house and take care of some quick business, and then rush my son out for a COVID test to allow him to return to school, all of this while I had important Zoom meetings to attend to that would take me out of the game for shoveling another spot.

I proceeded to the garage, obtained a couple of plastic folding chairs, and set them up in my beautiful void on the blacktop, staking my claim.

It’s also probably worth noting that since the last time we had any real snow, our neighborhood has changed. More single-family houses flipped into multi-family apartments. More cars. Fewer parking spots.

So I looked deep within myself to see whether I was pro-savesies or anti-savesies, and in this case, I went pro-. I proceeded to the garage, obtained a couple of plastic folding chairs, and set them up in my beautiful void on the blacktop, staking my claim.

My wife had suggested putting our two blue recycling buckets in the space if I was really going to cross this threshold, but I felt like that wasn’t enough of a statement. People would move recycling buckets without even thinking about it. But to stop your car in the street and take a man’s chair away so you can enjoy the full benefit of his hard work — well, that takes a certain level of commitment, a certain type of human.

Now, I should point out here something important, should you decide to judge me for my spot-saving. I thought ahead about what would happen if I saw somebody removing my chairs and taking my spot. Would I yell out the window? Would I go outside and confront them in some way? Demand my spot back? No. If it got to that point, I would just give up the spot.

As the day played out, my chair scheme worked fine. My wife was able to park after her vaccination and get my son to his COVID test. I was able to pick my daughter up from school and return home, to “my” spot. Nobody touched the chairs or contested my designation of the spot as my own.

I felt good that I didn’t have to shovel out another spot, but I did wonder if I had made the right decision. I looked at some discussions being had on Wednesday on various Facebook community groups, particularly in densely packed neighborhoods like South Philly and Germantown, and I saw lots of angry people angrily discussing the perennially controversial topic.

It appeared that in a lot of folks’ opinions, those of my ilk who would save spots are just bad people. Though I have to wonder if a lot of those who think saving a spot is just plain awful are bicycle-dependent urbanist types who think that car ownership is evil to begin with. But I digress. (Hey, at least it’s a hybrid!)

UNCERTAIN IF I HAD DONE THE RIGHT THING, I consulted with Adam Hearlson, pastor of Overbrook Presbyterian Church, which my family attends. Hearlson received his master’s of divinity and PhD from Princeton, and I’ve listened to his sermons enough times to know that this is a man who knows a thing or two about ethics and morality.

I expected him not to have time to take a phone call on such a relatively frivolous subject, what with all the important things a pastor needs to do. But he wanted to talk about it.

“It’s a great moral dilemma, in part because there’s not an immediate answer, and like any good moral dilemma, context matters,” Hearlson told me, noting that this is also a huge problem in Boston, where he lived previously. “There’s a very difficult moral equation that has to be examined.”

Then, he advised, we have to look at the need of the person saving the spot. Does the person have some sort of handicap that increases the need to park in a particular spot? Are they unable to find a workable spot a block or two away that they could use and walk to?

“If you’re going to claim a spot and put a chair out there,” Hearlson continues, “this can’t just be, Well, I dug it out, so it’s mine. You need to have an actually good reason to need the spot when you return.”

Hearlson also felt it’s important to consider the amount of time you’re going to be gone from the spot. Gotta drop the kids off at school and return within 30 minutes? Maybe.

“But if you were gonna go work an eight-hour day and drive your car to your office, where there’s a nice parking lot, we’ve got a common-good problem there,” he observes. “If we saw everybody do that and follow that logic, there would be no spots at all for people to use during the day in your neighborhood while you’re not there.”

Hearlson and I agreed to glaze over the technical illegality of spot-saving, though he noted the irony of a municipal police department enforcing a no-savesies law when, he opines, it’s due to the failure of said municipal government’s city planning that so many of us have cars in the first place.

Finally, Hearlson thought that my strategy of conflict avoidance should any dispute over “my” spot arise was on the right track.

“If someone takes ‘your’ spot, you are not going to immediately know whose need for the spot is greater,” Hearlson advises. “And in this unfair world, there’s a need for a sense of respect of the person’s common dignity and a willingness to sacrifice on their behalf.”

Since talking with Hearlson, I’ve decided that I’ll use my spot-saving approach sparingly, and in an effort to balance out the yin and yang of all this (or maybe just to be a good person), I’ll dig out my complaint-prone neighbor’s car during the next snowstorm. And then hopefully she won’t steal “my” spot after somebody steals “hers.”