After Trump Insurrection, the Need for Newsroom Diversity Couldn’t Be More Obvious

The failed white supremacist coup was incited by the President, but it was enabled by those in the predominantly white media who spent years refusing to call his supporters what they were. 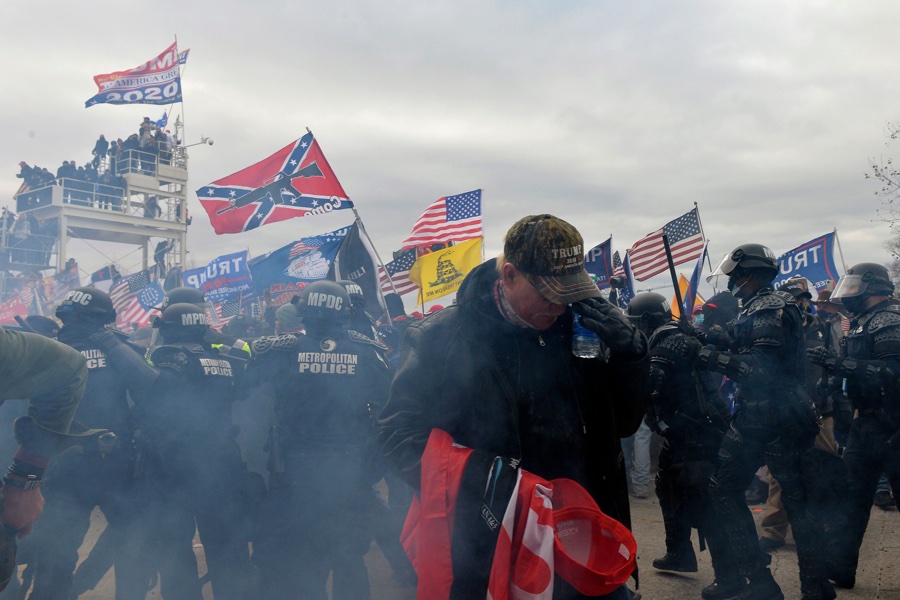 Trump supporters clash with police and security forces as people try to storm the U.S. Capitol Building in Washington, D.C., on January 6, 2021. (Photo by Joseph Prezioso/AFP via Getty Images)

It’s been a week and a day since a mob of domestic terrorists stormed the Capitol Building. Six people died as a result of the coup attempt instigated by President Donald Trump that has (finally) led to his expulsion from major social media networks and the loss of numerous loyal allies. And now, Congress has passed an article of impeachment against Trump again.

As a Black journalist who’s covered this debauchery since Trump’s 2016 victory, none of this surprises me.

Over the past four years, I’ve been gaslit for calling out the President. I can’t count how many times I was told by editors from various publications to stop referring to Trump as a white supremacist, or how often I was discouraged from attributing to Trump the violent actions of his followers. Some white editors thought being “fair and balanced” meant giving the President kudos for minimal and exploitative gestures (such as commuting the prison sentences of a few Black people), even as they told me to “tone down the rhetoric” when he said there were “very fine people on both sides” of the violent white nationalist rally in Charlottesville. It was rough to see white TV reporters play the “both sides” angle in attempting to explain Trump’s rise to power, the outcome of which was an increase in — and normalization of — racist and sexist commentators, columnists and talking heads with big media platforms.

CNN hired several Trump aides and loyalists who pushed his contentious agenda on air. The New York Times caught hell for publishing a racist op-ed from Republican Senator Tom Cotton that called for military intervention to suppress Black Lives Matter protests. There were complaints that media outlets humanized white nationalists in their coverage. And still, frustratingly, the staffing of America’s newsrooms failed to reflect the diversity of its population. Some researchers suggest that this disparity is playing a role in the media actually amplifying white supremacist rhetoric.

I’m still stuck wondering what would it be like if more Black people were given opportunities in the media to share “their side of the story” on Black Lives Matter, white nationalism and police misconduct. I imagine a time when there are more Black senior producers at cable news networks saying “no” to white counterparts who would allow a Trump spokesperson to keep lying on-air as entertainment. And while there have been notable promotions of Black journalists across broadcast and print recently, there’s still a lot of catching up to do.

The deterioration of democracy we saw at the Capitol last week is more than just the result of unleashed white supremacy. It’s also the fault of the “well-meaning” white people who passively enabled that white supremacy. Predominately white media outlets had an obligation to fully examine Trump’s presidency, but they chose to give platforms to “economically anxious” voters rather than center the marginalized voices most impacted by those voters’ rage. We saw story after story suggesting that the media’s ignorance of “America’s heartland” — white rural areas with blue-collar sensibilities — was why 2016 caught so many off-guard. With every interview in a diner, journalists furthered the illusion that economic anxiety, not racism, drove white voters to Trump. But white journalists didn’t want to listen to Black journalists who decried these voters’ racism, called for more coverage of the heartland’s “chocolate cities,” and demanded greater newsroom diversity.

Trump never hid who he was. From the very beginning, he promoted xenophobia, racism, and undemocratic ideals. He enforced a Muslim ban, further discriminated against transgender people in the military, stoked violence during Black Lives Matter protests, told the Proud Boys to “stand back and stand by,” and did everything in his power to overturn a fair election. Trump has been nothing but consistent and transparent about who he was, yet the mainstream media bent over backwards to explain it away, to convince us we couldn’t believe our own eyes.

And in some instances, the media is still pushing a narrative in which these domestic terrorists and Trump supporters are poor blue-collar Americans, even as arrests show these traitors to be police officers, CEOs, elected officials, Olympic athletes, and other well-off citizens. Early coverage focused on buffoons in fur caps and goofy costumed cosplayers, before anyone realized the severity of the attack — and the demographics of the attackers.

Some media seem to be waking up and recognizing that many of the politicians calling for unity in the wake of last week’s attack are the same individuals who voted to overturn the election. But many in the industry continue to misunderstand what actually caused this insurrection. Which is why right now, I can’t even think about unity without retribution. The traitors must pay for what they did; Trump must suffer the full consequences of his actions; and the media must reckon with its inability to elevate the voices that could have helped reverse this trend early on: Black journalists.

I knew this day would come — the moment when after years of normalizing Trump’s bigotry, white newsrooms would begin to wake up. But it’s not going to be that easy. It’s time for white editors who played “both sides” for so long to step aside and give power to those who have been keeping this democracy afloat. The White House, the Senate and the House would never have been wrested from Trump’s party had it not been for Black and brown voters who stepped up when others underestimated our strength. Now is the time for newsrooms to reflect this power shift. Anything less than that is just lip service, and a recipe for a democracy that will forever be in peril.