Three key takeaways from Philadelphia's weekly briefing, including the return of indoor dining. 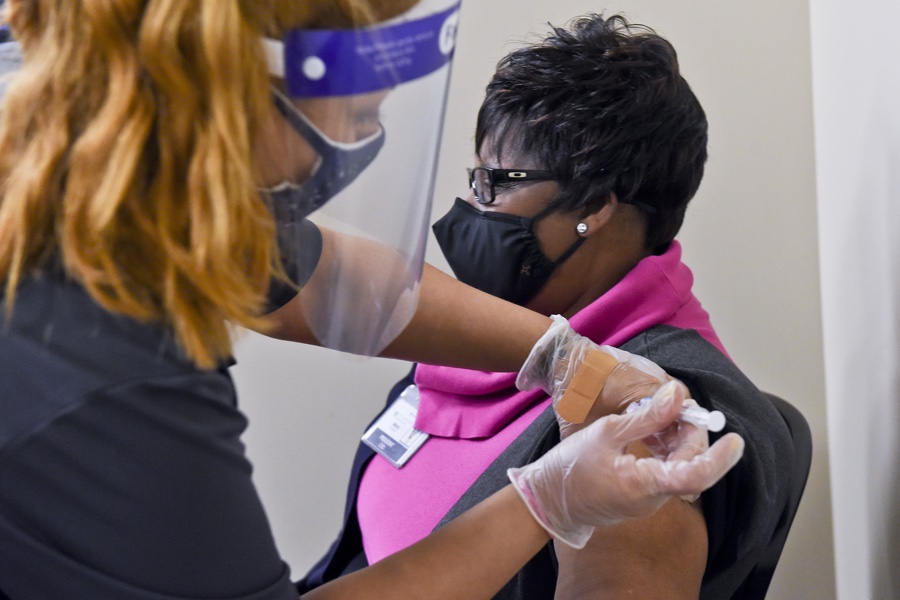 A health-care worker receives the Moderna COVID-19 vaccine. Soon, other essential workers will be eligible for the COVID vaccine in Philadelphia. Photo by Ben Hasty via Getty Images.

1. The list of Philadelphians eligible for the COVID-19 vaccine is about to get a lot bigger.

Health commissioner Thomas Farley announced the next group to receive the vaccine, which will include some essential workers, people over 75 years of age, and those with health risks. Farley estimated that the group, which numbers in the hundreds of thousands, could start receiving vaccinations the week of January 25th.

Still, the existence of a list does not mean immediate vaccination for those who qualify. In fact the city is still vaccinating its first priority group of health-care workers and nursing home residents, and as of Tuesday, it had vaccinated 50,500 people. The weekly supply of vaccine remains around 19,000 doses, which officials have repeatedly said is far from enough. “We have no idea how many doses we will receive on a weekly basis after January,” Farley said. “That uncertainty makes it very difficult for us to plan.”

The city expects to vaccinate the newly eligible population at a combination of sites including pharmacies, doctor’s offices, large clinics, and mass vaccination sites like the one currently in operation at the Convention Center.

Farley also said Tuesday that the health department is still waiting on $14 million in federal funds — the city’s estimated cost of its entire citywide vaccination effort — allocated to vaccine distribution from the latest COVID relief bill.

Here’s the list of people in the 1B group to be vaccinated:

In addition to the 1B group, the city also announced a 1C group that will be next in line. Those people include:

If you have been closely following the state and federal COVID vaccination guidelines you may have noticed one important difference on Philly’s list: Here, people with health conditions like diabetes and heart disease are included in the earlier 1B group, whereas in other guidelines they come in the later 1C group. This, Farley said, is an intentional move with an eye toward equity. “These medical conditions are common in low-income populations and minority populations,” Farley said, “and this is one way to address racial disparity in COVID mortality here in Philadelphia.”

Finally, if you don’t fall into any of the above categories, you’ll be vaccinated last. It’s too early to say precisely when that would be, although Farley noted that “we will likely be in this [1B] group vaccinating people for months, unless vaccine production accelerates or another vaccine is approved.”

In addition to the vaccination update, city officials announced a return to indoor dining. The news comes in spite of a slight rise in new COVID-19 cases last week, during which the city recorded an average of 584 new daily cases per day, up from 491 the week prior. Farley attributed the uptick to lingering cases from the holidays and felt indoor dining would be safe in spite of that positive trend.

The indoor dining regulations stipulate that restaurants can operate at 25 percent capacity — possibly higher if they can prove they meet certain ventilation standards. Masks must be worn at all times except when eating and drinking, per the regulations, and the maximum table size is four people. Dining with people outside of one’s immediate household is still banned. Ditto for private gatherings between households.

The city has also allowed theaters to reopen at 10 percent capacity, though they may not serve any food or drink.

3. The City Is Still Struggling to Vaccinate Black Philadelphians

Last week, city officials expressed concern that Black Philadelphians were underrepresented among vaccine recipients. The data this week is no different: Just 10 percent of those vaccinated have been Black, whereas white people make up 51 percent of all vaccinations.

Farley said that as the city begins to vaccinate beyond health-care workers, it will likely become more active in working to engage those with concerns about the vaccine, whether through media campaigns or by tapping community leaders who have already received the vaccine to speak with people on the fence. But, Farley added, “It’s not so much us necessarily telling people as it is listening. I do think this will improve but it does take time.”