Why Is Most of Philly’s COVID-19 Vaccine Still Sitting in Storage?

Sixty percent of the doses we've received have yet to be administered. And that's actually better than the statewide averages in Pennsylvania and New Jersey. Inside the logistical nightmare of launching a massive vaccination program during a pandemic. 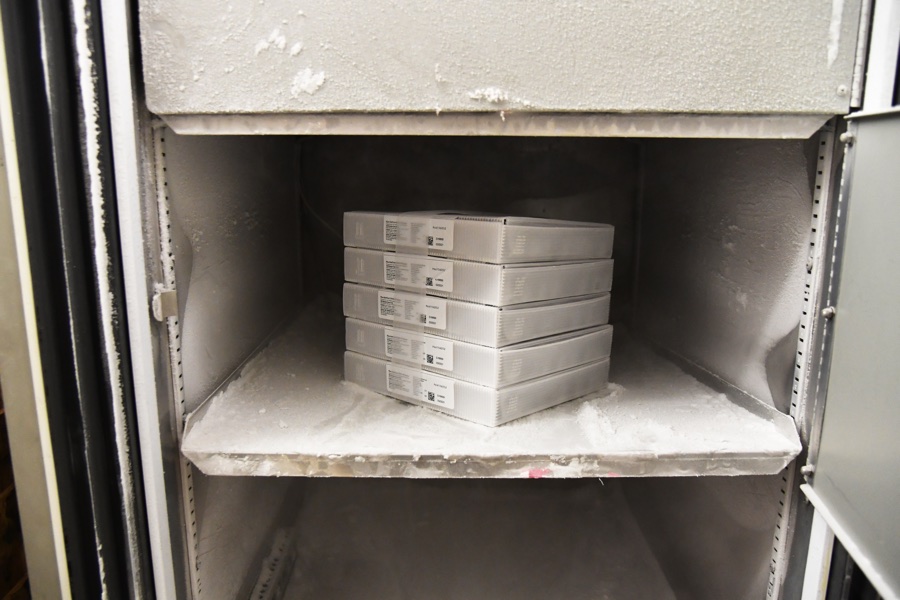 Doses of the Pfizer COVID vaccine sit in storage in a super-cold freezer. Photo by Hyoung Chang via Getty Images.

The nationwide rollout of a coronavirus vaccine was never going to be easy. That much we knew. But if the obvious problem was thought to be on the supply side — making enough vaccine for some 260 million eligible Americans — it turns out there’s been a second challenge: administering the few doses that are currently available.

City health commissioner Tom Farley revealed what seemed like a startling statistic at a press conference on Tuesday: Sixty percent of Philly’s vaccine doses are sitting in storage and have yet to be administered. In fact, the really startling statistic is that Philadelphia is actually vaccinating more efficiently than other places. Nationwide, just 30 percent of available vaccine doses have been administered, compared to 40 percent in Philly. In Pennsylvania, New Jersey and Delaware, the figure ranges from 25 to 30 percent. Even though health departments are prioritizing the relatively small number of health-care and nursing-home workers (in Philly’s case, roughly 130,000 people), they’re failing to keep up even with the paltry supply.

And the supply is paltry. “This is not enough,” Farley says of Philly’s vaccine allocation from the federal government. “At this rate, it’ll take more than 12 months to vaccinate the entire population of the City of Philadelphia.” But to blame the sluggish pace entirely on vaccine production is at least partially at odds with the reality on the ground. The city health department may not be receiving enough of the vaccine, but it’s also been unable to dole out as many doses as come in.

Elsewhere in the country, the backlog has gotten so bad that the White House coronavirus task force is reportedly considering telling health departments to distribute soon-to-expire vaccines on a first-come, first-served basis. That isn’t happening in Philly yet, and Farley says not one dose has expired here. Still, the city has vaccinated just 31,000 people so far.

It isn’t unduly harsh to call the national effort to date a failure. The federal government set its own benchmark of vaccinating 20 million people by the end of 2020. Fewer than four million have been vaccinated so far.

There are plenty of legitimate reasons for vaccination struggles, especially at the local level. For starters, two of the three weeks of vaccination in Philly were during the holidays. The logistics of the Pfizer vaccine in particular — it must be stored in a hyper-cold freezer and lasts only six hours once thawed — make things complicated. Many hospitals have been conservative in making sure they don’t take out too many doses at once for that reason. Farley emphasizes, too, that while the city is starting distribution to local pharmacies (still for health-care workers only) and may need to set up vaccination clinics in the future, it’s currently doing so with no federal funding assistance. (The latest stimulus bill contains $8 billion for that purpose nationwide, though the city has yet to be told when its funds might arrive.)

And in case you forgot, the vaccination campaign is unfolding, you know, during a pandemic. Hospitals can’t simply cram everyone into a conference room. Plus, workers receiving a vaccine have to wait 15 minutes in case of an adverse allergic reaction. This may not seem that long, but at a moment when short-staffed hospitals are experiencing a coronavirus surge, there’s hardly any time to break from work to get a shot. “We’ve all been busting our backs to make sure we can cover for each other so we can get our doses,” says Beverly Minch, a Temple nurse working in the COVID ICU ward. The staffing situation at the hospital, she says, “is a nightmare.”

Administering vaccine is one thing; convincing people to receive it is another. At Einstein Medical Center, 40 percent of eligible workers have yet to sign up for vaccinations. “That’s a little bit disappointing to me,” says Steve Sivak, one of the doctors at Einstein coordinating the vaccination effort. Farley has noted that there appears to be a significant racial disparity in who’s taking the vaccine: 43 percent of recipients have been white, 12 percent have been Black, 10 percent have been Asian, and five percent have been Hispanic. (Ten percent of recipients identified as “other,” and the city doesn’t have data on the remaining 19 percent.)

Farley says the Black population numbers are especially striking. Vaccine skepticism among Black Americans should be no great surprise, given the long history of racial discrimination in the health-care system. “But it is is still a problem,” Farley says, “because we know African Americans are more likely to get COVID and more likely to die of COVID.”

At Einstein, hospital administrators are preparing outreach efforts for the 40 percent of staff who have yet to sign up for the vaccine. Sivak recalls the early days of flu vaccinations at Einstein back in the early 2000s, when just 25 percent of employees at the hospital signed on. Sivak led a campaign to increase that number, and within a few years, it grew to 95 percent. Now, flu shots are mandatory. Granted, the flu shot is no longer a brand-new vaccine, but, Sivak says, the message is the same: “Education works.”

None of these obstacles are going anywhere; if anything, once more vaccine becomes available, they’ll be amplified. With the city receiving, at least through January, just 19,000 total doses of the Pfizer and Moderna vaccines per week, and with some 100,000 people still eligible to be vaccinated just in the first group of health-care workers, there’s a long way to go. Vaccines may mean the end of the pandemic is in sight. But just because we can see the end doesn’t mean it’s not far away.