How Philadelphia-Area Santas Are Dealing With a COVID Christmas

From tire juggling to playing Santa behind a plastic wall, five performers tell us how they’ve adapted their Christmastime acts. 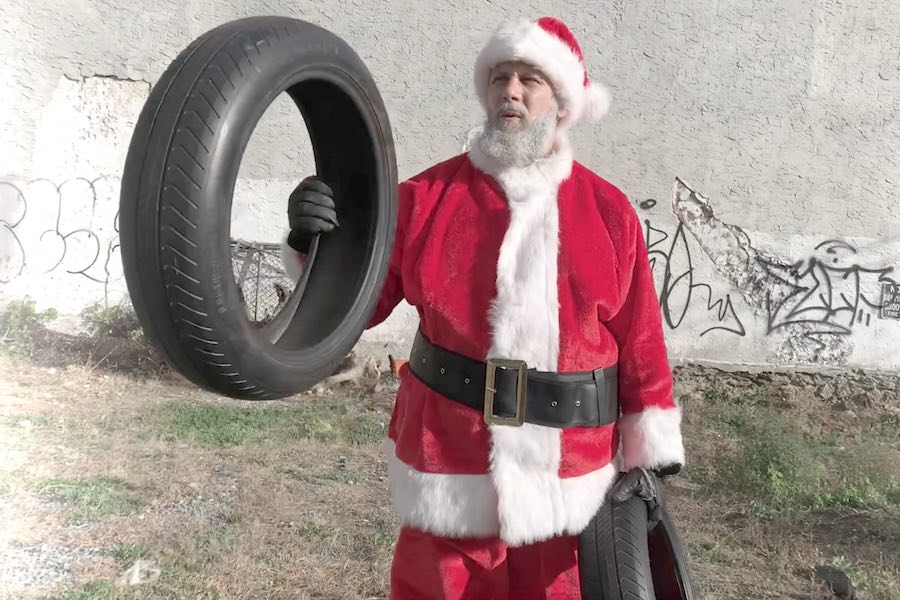 Philadelphia actor (and prolific tire juggler) Terry Brennan performs as Philly Santa, one of the local Santas for hire during COVID. (Photo courtesy of Philly Santa)

Normally at this time of year, parents would be dragging their kids out to places like Macy’s and the King of Prussia mall for a little meet-and-greet with the one and only Santa Claus. But 2020 is anything but normal.

So we reached out to some Santas-for-hire in Philadelphia (and one Mrs. Claus) to learn how they’re adapting to stay in business — and why they should be the ones to hear your kid’s Christmas list.

Résumé: He used to play Santa at Macy’s. After that, he started doing phone calls from Santa. “The people who hire me for the phone calls give me specific instructions. So I would wind up telling the kid, ‘Remember to stop yelling at your brother.’ Or ‘Make sure you let your parents sleep until at least seven on Christmas morning.’ It really becomes about a cute form of child management.”

COVID Pivot: “The Zoom thing hadn’t even occurred to me. But then a friend texted me to say they didn’t have a Santa they could take their kids to. And they asked if I would do it on Zoom. I just started actively pushing that last week, and it has absolutely blown up. I am flooded with requests.” A 10-minute Zoom visit will run you $35. Brennan is also accepting pay-it-forward donations so he can provide virtual Santa visits to families who can’t otherwise afford them.

Special Philadelphia Santa Talent: Tire juggling. Yes, you read that right. (See the video above.) If you want him to show up at your house to juggle tires ($100 for that visit), Brennan asks that the little ones remain inside and watch from the door or window. “It’s not just about COVID,” he explains. “I also don’t want a tire falling on your kid.”

How He Handles Kids Who Wants Something They Can’t Have: “Parents are commonly asking me to do expectation management: ‘Sarah, I don’t think I can bring you a cat, because the cat might get sick if she rides in the sleigh. It’s so cold up there!'” 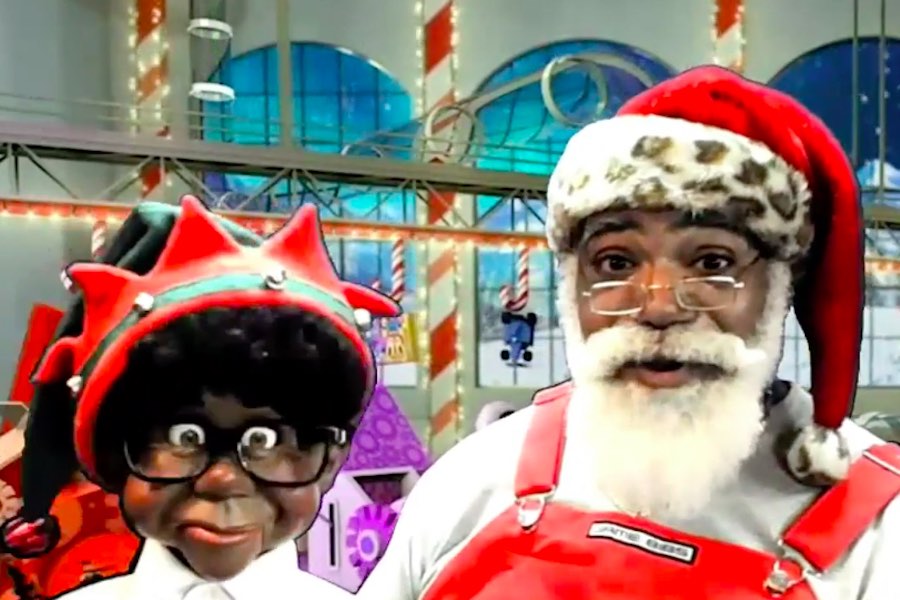 Dennis Daniels as New-Age Santa, one of the few Black Santas working as Santas for hire in the Philadelphia area

Real Name: Dennis Daniels. The “New-Age Santa” doesn’t mean that he’s into crystals and chakras. “I’m a Santa of a new age, but one with old-fashioned values,” says Daniels.

What Being a Black Santa Means to Him: “I’m one of the few Santas of color working these days in the New York, New Jersey and Philadelphia area, so I do a lot of traveling. If there is a need, I will go to that need. I think children need to see a Santa that looks like them. It really means something.”

COVID Pivot: Like many of us, he’s switched to virtual meetings. Business is good, with him booking “more than 170 in the last two weeks. It’s actually been a real boon. I’m seeing people from Atlanta and California. I had a grandma in Japan find me. And I think virtual will remain a thing even after COVID is gone. It’s a good alternative for people who don’t want all the pushing in the malls.”

Previous Life: Daniels retired as a school administrator earlier this year, intent on pursuing his talents as a ventriloquist. “But then came the pandemic. No live entertainment. I could not book a gig. And so Santa has been a godsend.” Daniels works his ventriloquist puppet (name: Elf Dorsey) into his Santa act.

What Kids Are Asking For: The PS5, of course. (Good luck.) “But do you remember Baby Alive from the ’70s? She’s making a big comeback. It’s the hot commodity for little girls.”

Booking Information: Send him a message on his Facebook page. 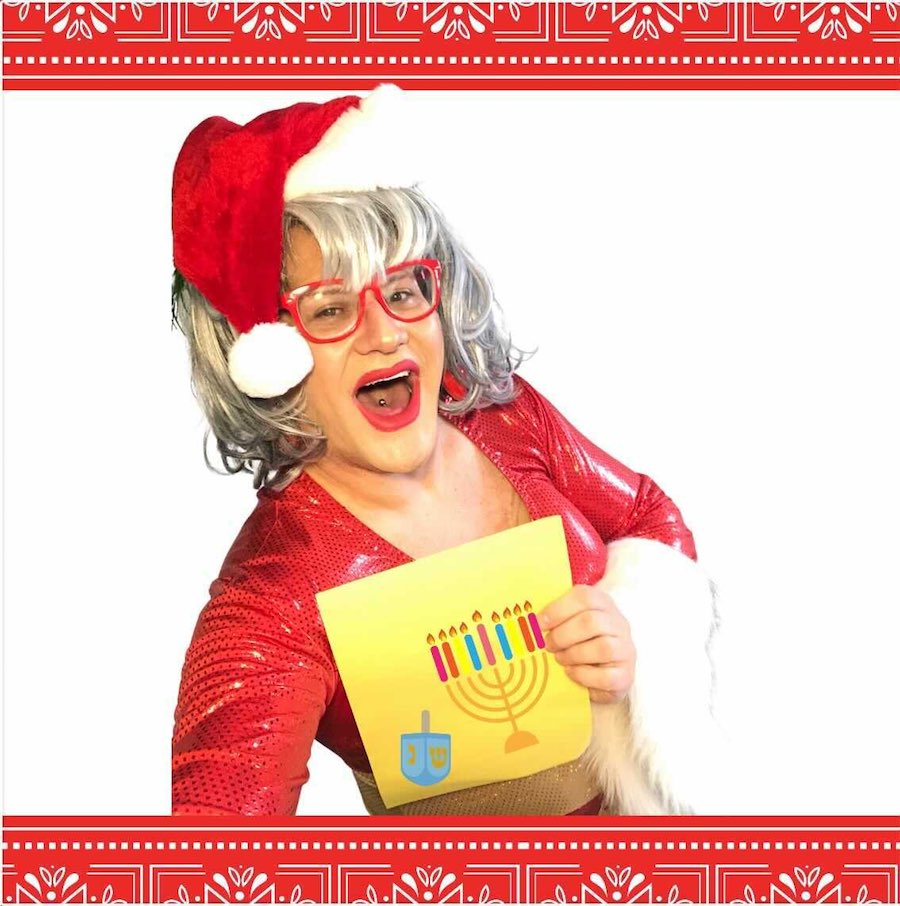 If you’re looking for a different kind of Santa experience, here’s Ian Morrison as Sandy Claus, or simply Mrs. Claus. Whatever you prefer.

In Case She Looks Familiar: Sandy Claus is played by the same person who performs as beloved Philadelphia drag queen Brittany Lynn, the progenitor of the hugely popular (and hugely controversial, to some) Drag Queen Story Time for kids.

Or, If You’re Jewish … “I’m one of the only Jewish drag queens I know. Being Jewish isn’t exactly as exciting as a guy breaking into your house and leaving some gifts there, but we have fun. I can read stories about the Festival of Lights and do menorah crafts and things like that. I was bar mitzvah’d. Did the Hebrew-school thing. I get it.”

COVID Pivot: Morrison had been doing a lot of outdoor performances as Brittany Lynn during warmer weather and was supposed to do an indoor show later this week: “I had COVID, so I know what it feels like.” Normally, Morrison spends Decembers touring Brittany Lynn’s Non-Denominational Christmas and Holiday Extravaganza. But not this year. And thus Sandy Claus was born.

What You’ll Pay Sandy Claus: “I like to do a half hour on Zoom for $100. I can do 10-minute visits for less. But I find that 30 minutes is better. Gives the parents a chance to go drink in the kitchen.” For those who don’t want their kids being too informal with their elders, Morrison will also perform simply as Mrs. or Ms. Claus. 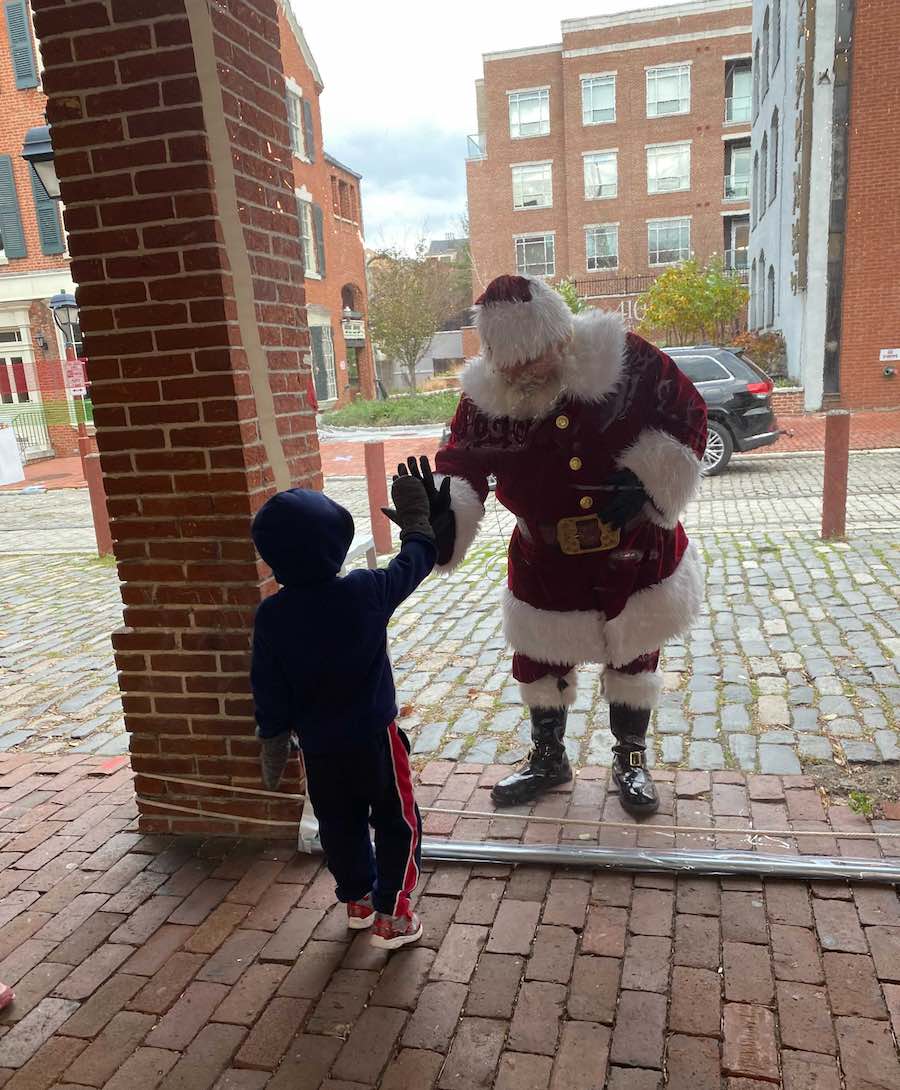 Santa Kringle does his thing behind plastic on South Street

How He Got Started as a Philadelphia Santa: About 20 years ago, a friend who worked at a special-needs school offhandedly lamented that the school didn’t have a Santa for the kids. “And I was pretty chubby, so I figured what the heck. I bought a suit on eBay and never looked back.”

Since Then: Naimoli has steered clear of the malls, instead hiring himself out for private parties and corporate events. He lights the tree on South Street every year. He’s done promo appearances for CBS Radio and QVC.

COVID Pivot: “I’m normally completely booked up for Christmas by May. This year, that all changed. So I’ll do a Zoom visit for $25. And if somebody can’t afford it, that’s fine. When it comes to the business of being Santa, I am the worst.” He did do the Christmas-tree lighting on South Street this year, but his meet-and-greet afterward was a little different: Naimoli stood behind a plastic wall the entire time.

2020’s Most Common Gift Request: “It’s a sad one. I’ve actually had kids ask me if I can find a cure for COVID. It tugs at your heartstrings. They really believe Santa can help. Other than that, I’m amazed, but Barbies are still the thing.”

And One Last Detail We Feel We Must Mention: Santa Kringle might be the only Santa you’ll meet who’s a former professional wrestler: “I was Super Cody for 30 years. Super Cody was a superhero. Well, actually, he was a guy who thought he was a superhero. I did that until I had a car accident in 2012.” 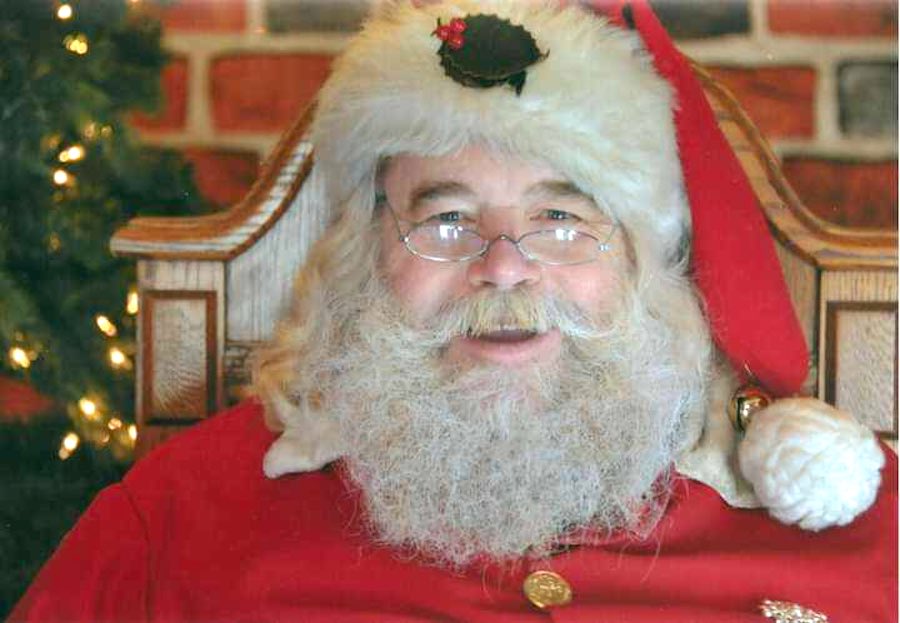 Santa Harry, the only Santa we talked to who isn’t doing virtual visits.

Real Name: Harry Bratton. “But I’ve had jobs where I don’t even tell the photographer or cashier anything other than ‘Santa,’ so they don’t accidentally call me ‘Harry’ in front of the kids and ruin the magic.”

His First Santa Gig: The Christmas pageant when he was in third grade. In college, he did frat parties as Santa. Once he was a parent, he was tapped to play Santa at PTA events and Cub Scout meetings. And then he went full-fledged into the mall Santa business.

COVID Pivot: “I’ve been doing the Christmas Village near City Hall since 2008, the year Christmas Village started. I actually found that job on Craigslist. But they decided not to have a Santa this year.” Bratton says that after Christmas Village fell through, he booked a steady gig at Reading Terminal Market. But they just canceled on him as well, so he’s trying to book as many one-offs as he can in the limited time remaining. “I’ll be down at Hawthorne’s in South Philly doing a socially distanced Santa visit in their new Christmas Garden on the weekends left in December.”

Why He’s Not On Zoom: Well, he expected to be busy with his in-person gigs before they were canceled. Plus, he works a full-time job as a traffic producer for IHeartMedia and has a part-time job as a courier, transporting medical specimens. “I have to sleep at some point. And I just didn’t have the time to get the digital setup together.”