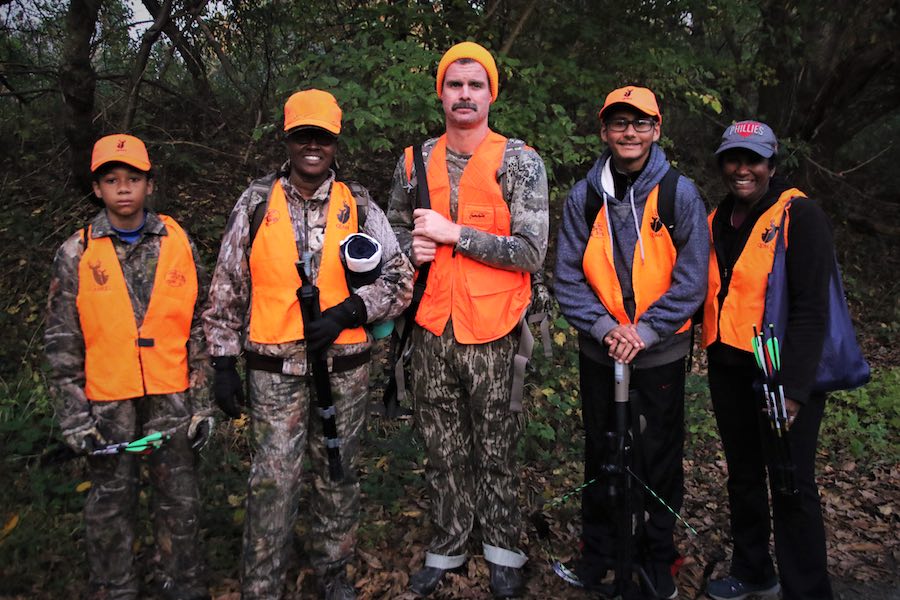 This Saturday’s weather in Philadelphia looks particularly glorious for late October, with highs stretching into the mid-70s. But if you were planning on taking advantage of that relative balminess by going for a hike at Heinz Wildlife Refuge, I suggest you make other plans. Heinz is closed to the public Thursday through Saturday for its second annual mentored archery deer hunt.

Full disclosure here: My son participated in last year’s inaugural mentored deer hunt at Heinz. It was his first time hunting, and I accompanied him that day. You can read all about that experience — and about my wife and my bewilderment over his interest in hunting — here.

That interest didn’t wane after months of eating the delicious venison he came home with (pro-tip: venison biryani!), so when Heinz opened up its lottery for the 2020 deer hunt, he applied right away and got in.

This year’s hunt has doubled in size from last year’s, with 40 slots available. The hunters have been divided up over one weekend each in October and November and two weekends in December. Thankfully, my son scored October. I can’t imagine sitting in the woods at 5:30 a.m. in December.

Of course, doing a deer hunt in a major American city is bound to draw some controversy, as the first mentored deer hunt at Heinz did last year. And officials at Heinz are expecting criticism this year as well.

There are those who object to closing a public park to the public, no matter the reason behind it. And then there are those who, predictably, don’t like the idea of killing animals inside of something that calls itself a wildlife refuge. “It’s an oxymoron!” noted one protester on Heinz’s Facebook page. (There are also those who just believe that killing an animal is wrong, period, but I’ll just let them go on eating their chemical-filled Beyond Burgers.)

But Heinz Wildlife Refuge deputy manager Mariana Bergerson explains that there are simply too many deer at Heinz for the size of the park. Bergerson says that the 1,000 acre refuge contains about 74 deer per square mile, while studies have concluded that somewhere between 20 and 38 deer per square mile would be ideal for maintaining a healthy ecosystem.

“Managing the deer herd is so important,” she says. “The deer no longer have natural predators here, so the herd is too large and they overbrowse on trees and shrubs, which prevents other wildlife from eating it. Having a high population of deer also produces the circumstances for disease to spread more easily around the herd. Just like COVID: You have a lot of people in one area, you spread the disease quicker.”

Bergerson also points to the high number of car collisions in the area, since Heinz is located in a very densely populated area. The refuge is wedged between Southwest Philly neighborhoods, the airport, and Delco. Lots of cars + lots of deer = lots of cars hitting deer.

Heinz had already been using sharpshooters to cull the herd for years. But with the way they’re doing it now, Bergerson reasons, they’re culling the herd while also providing an opportunity for people to learn about hunting — particularly people who live in and around the city.

“We really aim at getting a diverse audience,” says Bergerson. “Especially those from Philadelphia who don’t grow up in hunting families.”

That’s all well and good. But it still means that I have to set my alarm for 4:30 a.m. on a Saturday.