State Rep Chris Rabb Wants to Give $65,000 a Year to People Who Are Wrongfully Convicted

The Northwest Philly legislator is introducing a bill that would pay ex-prisoners an annual stipend for each year they wrongly served in prison. Currently they receive nothing. 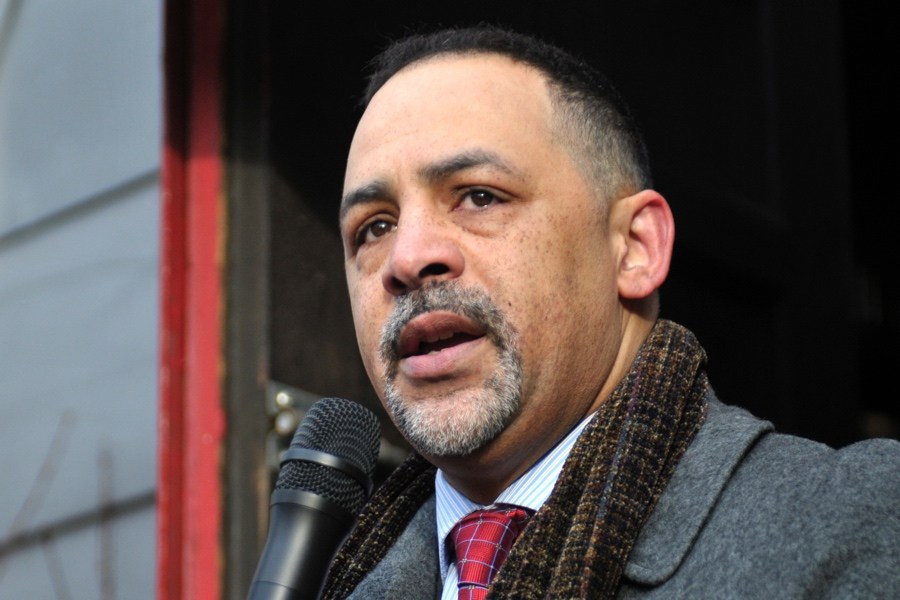 State Representative Chris Rabb plans to introduce a bill that would pay wrongfully convicted Pennsylvanians for the years they spent wrongfully locked up. Photo by Bastiaan Slabbers/NurPhoto via Getty Images.

In 2019, the state of Pennsylvania exonerated 14 citizens who had been wrongfully convicted and jailed, more than any year on record. Many had served more than a decade in prison. You might suspect that, post-exoneration, the government would provide a kind of recourse. But Pennsylvania is one of just 15 states that provides no financial support to people it wrongfully locks up — a response that basically amounts to a shrugged “Oops.”

State Representative Chris Rabb, of Northwest Philly, is planning to introduce a bill that would change that, providing an annual $65,000 stipend to ex-prisoners for each year they wrongly served in prison.

This isn’t Rabb’s first foray into a kind of state-sanctioned reparations. Last year, he signaled his intent to draft a general reparations bill that would provide tax breaks for Black Pennsylvanians. So far, neither bill has actually been introduced in the House. Each has considerable challenges as far as convincing Republican members of the House, and even some Democrats, of their merits. With the exonerees bill, for instance, Rabb says the legislation isn’t considered a priority “because the face of exonerees are Black men, and Black men are the face of violent crime in this country.”

But in the wake of the nationwide George Floyd protests, Rabb is starting to reignite conversation around the pieces of legislation, both of which he plans to officially introduce in the House this fall. We caught up with Rabb to talk about the two bills, along with the rest of his criminal justice reform agenda.

You sought to introduce a broader reparations bill that would apply to Black Pennsylvanians last year. At one point you said, “The chances of it being voted on are close to zero, but that’s not a reason not to do it.”

Are you similarly pessimistic about your exonerees bill today, despite the public prominence of criminal justice reform after the George Floyd protests?

I’m a little more encouraged, because since that time, two of my bills that relate to issues that have come up since the uprisings, and were considered oddly controversial, are now state laws. One is prohibiting peace officers from having sexual conduct with people in custody, which is an absurd loophole that has allowed for essentially institutional rape. The second is the creation of a police misconduct database so that prospective employers of peace officers will actually know what’s in somebody’s personnel file before they hire them. That’s a big deal. I wouldn’t have thought those bills would have seen the light of day, as long as there were Republican majorities in the House and Senate. It’s only because of these mass protests — highly organized uprisings — that have allowed for these statutes to be enacted. So that is a definite ray of hope in the legislative process that I attribute entirely to the leadership of protesters.

The exonerees bill is kind of a tonic to after-the-fact injustice. That bill, and the same goes for your other reparations bill, doesn’t touch the issues of policing, sentencing, or probation that many activists are talking about right now. Do you think that after-the-fact reparations should be considered at the same time as these other subjects? And is one easier to get passed than the other?

Yes. There are conservatives who believe that wrongfully incarcerated people should be compensated. So that is not a one-sided, ideological belief. It’s not unlike my bill to repeal the death penalty, whose co-prime sponsor is one of the most conservative members of the Pennsylvania House of Representatives, Frank Ryan, from Lebanon County. He believes that the death penalty is morally wrong and that it unduly punishes people who have the least resources to put up a defense. He also comes to this issue from his lens of what he calls a “pro-life” stance. So, I suspect I could probably get some Republican support for this.

You mentioned there have been some reform bills passed so far, including the misconduct database. Do you feel like the movement has now slowed in the legislature for some of the other reform measures?

Oh, yes, it’s slowed for a number of reasons. We had to negotiate which of the bills needed to be moved on immediately and what the political appetite was from those folks who had been the barriers to progress. So we shared, with the Republican leadership in the House, 19 Democratic bills that related to these issues in one way or another. They selected four bills. Those four bills got condensed into two bills. And those bills have now been enacted into law.

Were you satisfied by the choice of those four?

No. But it was the best we could do. So that’s why we’re not slowing down. Legislators have been working on this legislation long before these uprisings. My police database bill was something I had introduced in my first term and reintroduced in my second term. It was going nowhere. There are a number of bills that we’re still pushing on. The challenge is we have not been in session, and there are bills that are no less important around excessive force, training, qualified immunity, removing the special privileges that the police unions get through Act 111. All of these things are no less important than what was enacted into law, but there’s less Republican support for that, which means there’s really no room for negotiation.

How much, in your own head, do you think the future of any successful reform is tied to the effort to flip both chambers of the state legislature?

It’s entirely dependent on that. Because there has never been the will to address police violence or systemic racism by Republicans in modern history. And Democrats don’t have a great track record, either. They have a better track record, but compared to Republicans, that’s not saying much. So the real question is: What does Democratic leadership look like post-uprisings?

The Democratic ticket right now is headed by Joe Biden, who helped write the 1994 crime bill with significant input from police unions, and Kamala Harris, who herself is a former prosecutor. Are those candidates incompatible with the message of police reform that many Democrats such as yourself are now touting?

It makes it harder, because that means we’re having to focus as much on Democratic leadership as the folks who have been the barriers to progress in the past several years. But we can’t use who’s in the White House as a defense for not taking action in our own state. These state laws have a greater and more timely impact on Pennsylvanians.

But we can also say, Look, even though we have these two moderate Democrats in the White House, they wouldn’t have gotten there if it were not for serious support from the Black electorate, which has overwhelmingly expressed interest in addressing issues around police violence. “You owe us” — that’s essentially the argument. So from that perspective, for those of us who are Black elected officials, we’re going to expect more, not less, from the very people who have been perhaps too moderate in the past.

Traditionally, police are a hyper-local institution — laws governing policy and oversight are often handled at the city level. Since you represent a part of Philadelphia, I wanted to ask about Jim Kenney’s police reform proposals. Many activists have called for a defunding of police. Kenney’s proposed budget for 2020-21 didn’t decrease police funding at all. What do you think of the local response here to the protests and police reform?

It’s not nearly enough. It’s not nearly enough. I think what’s most problematic is a lack of creative vision. A lot of electeds are afraid of the term and framing of “defund the police.” But you can ask the same question in a very affirmative way by saying, “What is it that we are committed to transforming?” I use the term “community safety” as opposed to public safety. And for me, as a Black man, with two Black teenage sons, who has been raised to have a fear of police — and I’ve never been arrested, I have no criminal record, I have no reason other than the body that I inhabit to be afraid of the police — what does community safety look like? When you think about community safety, it means whatever community you are affiliated with, or whatever community is ascribed to you, you feel as safe in the body you inhabit in any public space, or private space for that matter, as anyone else. There is virtual consensus in this country that that is not the case.

When I was speaking out against police violence in front of the police headquarters, there’s a ’50s-era statue of a white cop, holding a white girl in his arms. To me, that exemplifies what public safety has meant in America: protecting white folks. At what point did any policing unit provide for true community safety if you weren’t a rich white guy or a privileged white women?  If the answer is “It never happened,” then we’re looking at the wrong thing. That’s the challenge, but that’s also the opportunity for local leaders.

One of the challenges also seems to be the fact that, in a lot of states, including Pennsylvania, the state legislature is more conservative than the cities in which the largest, and maybe most brutal, police departments operate. So with that in mind, where do you think the most fertile ground for reform exists? Is it at the state level, where you might be able to control a larger number of departments across the Commonwealth, or is it at local level, where you have a bigger mass of left-leaning citizens?

When you are being victimized by a system, you can’t choose between local, state and federal. It has to be all of the above. We don’t have the luxury of saying we’re just going to focus on a local level. The strategies are going to be different, because they’re different entities with different internal politics, resources, and responsibilities. But it requires everybody. The good news is there’s an unprecedented level of collaboration I’m seeing between local and state. But we have to keep pushing, because any progress that we’ve made has come from these organized protests. Those protests must continue and expand and become more sophisticated, to influence people in elected and appointed office to do the right thing.