Some of us can direct our righteous anger in two different directions at once. More of us need to develop that capability. 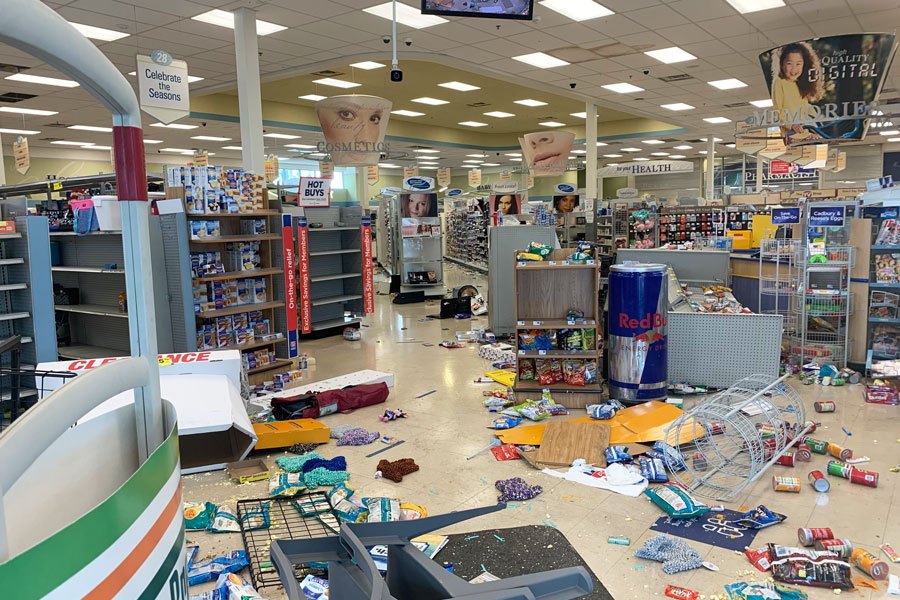 Inside the Rite Aid at the Shoppes at La Salle in Germantown. Photograph by Sandy Smith

“A riot is the voice of the unheard.”

Most of you have probably heard this lesser-known Martin Luther King quote by now; the riots in Minneapolis have given it fresh relevance. A friend of mine, a young African-American man who takes a keen interest in civic affairs, uses it to try to explain to white people why these riots are taking place now.

This same person got upset about something else last night as a second curfew descended on the city. His target this time: The people who have turned the protests and riots into an illegal shopping spree.

Some of these people may have been among those who set fire to that Indian restaurant in Minneapolis whose owner taped a sign reading “Minority Owned” in its window. As he watched the fire on TV, the owner, Ruhel Islam, posted this on Facebook:

“Let my restaurant burn. Justice needs to be served, put the officers in jail.”

This morning, a middle-aged woman who lives on the other side of The Shoppes at La Salle from me was having none of that. As we both stood in front of the ransacked Rite Aid drugstore — the only business in the strip mall to have successfully been invaded — she let her fellow African-Americans, some of them likely neighbors, have it.

“These ain’t La Salle students did this, they’re all home,” she said to no one in particular. “This ain’t about no George Floyd. These are crazy people who took advantage of a situation.”

She didn’t stop there. “I live here. I come here every day. I get my medicines here. Why would anyone trash their own neighborhood like that? I’m black, and today, I’m ashamed to be black. They treat us like animals because we act like animals.”

As I expressed agreement with her rant, she told me she was leaving. “Here, or the city?” I asked. “Right now, I want to leave Philadelphia,” came her reply.

Here’s the kicker: Both Ruhel Islam and that neighbor I met this morning are right.

As Martin Luther King knew and the rest of us tend to forget, violence is the last, not the first, resort of most people who face oppression, subjugation or mere discrimination. We have been pressing the case against cops who deny our humanity when they encounter us (possibly) doing something wrong for several decades now. Stonewall someone who’s been wronged too many times, and unless they have the patience of a saint, sooner or later, they will lash out.

And then, after they do, the opportunists come around to push their own agendas. Whether it’s to overturn the whole system as the anarchists want, to hasten the race war as the white nationalists want, or just to “get paid” as the looters want, they all distract from the message the protesters meant to deliver with their shouts, bricks and flames.

And they discredit it in the eyes of too many. It seems we have a hard time dealing with holding two seemingly contradictory thoughts at the same time. In this case, the thoughts are: The rioters want to call our attention to a continuing injustice we should have fixed by now. And: We who suffer the injustice can be our own worst enemies at times.

Those who emphasize the first message downplay the second, and those who harp on the second ignore the first.

I didn’t get around to speaking with that neighbor whose name I never learned about the George Floyd case in particular, or her feelings about it. But I suspect that had I done so, she would have expressed sympathy and support for the protesters too.

Most of us African-Americans can make the distinction between the protesters and the looters. Why can’t everyone else?