In a Post-Lockdown World, Philly Tourism Eyes a Reset

A $7.6 billion annual industry screeched to a halt in the wake of coronavirus. But will economic reopening actually lead to a rebound anytime soon? 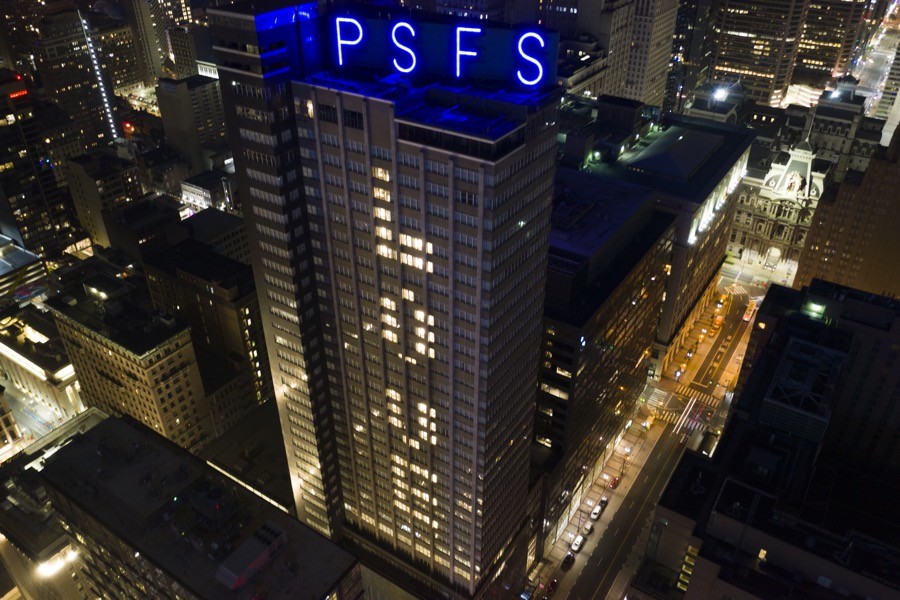 With no tourism in Philadelphia, an uninhabited Loews Hotel displays a message in April. Courtesy photo by Elevated Angles for VISIT PHILADELPHIA.

It was shaping up to be another banner year for tourism. In January and February, Philly was on pace to break its all-time visitation record for the ninth year running. Hotel stays were up 8 percent. And the Philly national hype train, after making prior stops in the pages of the New York Times, GQ, and Food & Wine, continued to chug along unabated: National Geographic placed us on its list of the 25 best places to travel in the world.

These distinctions have started to mean less and less over the years, as Philly has cemented itself as a predictable “unpredictable” choice on various rankings, but that doesn’t mean they’re still not a boon to the city’s tourism economy. And that tourism economy is an inarguably massive business, one that accounted for $7.6 billion in spending last year, more than $900 million in state and local taxes (including $340 million for Philly alone), and a total of 100,000 jobs in Philly and the surrounding suburbs.

The coronavirus crisis put a hard stop to all of that. And unlike restaurants or retail, which might be able to slink along with takeout or online shopping, the hospitality sector has virtually no immune system when it comes to responding to a pandemic. Hotels across the city sit completely unoccupied. Nationwide, the total estimated job loss in the hospitality sector for 2020 is nearly 6 million.

But as the Philly region slowly moves toward economic reopening, it will be the task of Visit Philly, the city’s tourism and marketing agency, to try and engineer a way out of the rut. That’s a pretty tall order, considering Visit Philly, which is funded by the city hotel tax, is in a rut of its own: The group expects a 40 percent, or $6 million, cut to its budget this year as a result of lost tax revenue.

And then there’s the more existential question: How exactly do you market a city, when most everything that makes a city appealing to travelers (its restaurants, its museums, its nightlife, its sporting events) is a thicket of enclosed, packed spaces — the precise thing that many travelers in the time of coronavirus will be looking to avoid?

While the Philadelphia region is heavily reliant on leisure travelers — 88 percent of the 44 million visitors in 2018 came for leisure — it is particularly dependent on a certain subset of travelers: the 18 million who actually spend the night. In Philly proper, that group accounts for just 40 percent of all visitors, but they are responsible for roughly 75 percent of spending.

Obviously, the pandemic has eliminated virtually all of those visitors for the time being. People have been canceling hotel reservations left and right. According to Smith Travel Research, an industry forecaster, Philly would have likely had 1.4 million room bookings between March and June of this year; now that number has been downgraded by 1.1 million bookings. If we look through December, there are only 280,000 room reservations currently on the books, according to Visit Philly, compared to more than 600,000 at this same time last year.

There is at least one glimmer of good news. “Leisure travel will come back first,” says Visit Philly CEO Jeff Guaracino. But the operative question is when. To answer that, Visit Philly has been funding research among residents of the Philly, New York City, and Washington, D.C, regions. The latest results, as of late April, aren’t especially promising. Of people aged 35 and up — presumably the group that would spend the most money while traveling — only 10 percent say they would feel comfortable visiting Philly within the next three months. Fifty percent of that group says they wouldn’t consider traveling to Philly until at least seven months in the future.

Guaracino is now faced with an unenviable challenge: Convincing travelers that you want to spend your vacation in the part of Pennsylvania that just recently experienced the highest rate of COVID-19 cases. Not to mention the fact that many summer travelers are often looking to, you know, escape the hot, muggy city. Visit Philly’s own market research has found just that: “People are saying they want to get to a beach, or get to a lake,” Guaracino says. Not exactly Philly’s strong suit.

Guaracino is at least going to try to sell what he can, emphasizing what green space the Philly area does have. (You can expect plenty of ads plugging Valley Forge). Still, he concedes, “We have a bit more competition in summer in terms of other activities.”

For now, Visit Philly is stuck in a sort of holding pattern. Another study the group commissioned in early April found that more than half of Pennsylvanians aren’t even thinking about planning their next trip yet. Visit Philly also scrapped a $2.5 million marketing campaign planned for this summer, and Guaracino says there’s no point in brainstorming a replacement campaign of the same scale — the situation is simply too fluid. But as the months pass, Guaracino expects there could be some advantages coming Philly’s way. Wintertime is normally cruise season, and those travelers may now look for a different domestic getaway instead.

“There is pent-up demand, and people want to travel,” Guaracino insists. “There’s also money to travel.”

For Hotels, a Different Challenge Altogether

If the fate of Philly tourism is in many ways tied to the economic reopening of restaurants, cultural institutions and sporting events, the same is not exactly true of the hotel business. Ed Grose, executive director of the Greater Philadelphia Hotel Association, says that Philly’s hotel ecosystem relies relatively little on leisure travel. Just a third of Philly hotel stays are from vacationers, while two-thirds of the bookings come from large gatherings like conventions and business travel.

“In general terms, business travel is the most coveted guest because they pay the highest rate,” Grose says. But business travel has all but stopped, and no one knows when it will resume. Conventions and other large events — which in 2018 accounted for more than one million hotel bookings and nearly $400 million in spending — have evaporated, too. The city has already lost 10 of its largest conventions, including the 20,000-person Alpha Kappa Alpha sorority conference and a regional volleyball tournament that was to be attended by nearly 30,000 people.

This all trickles down to hotels, which in 2018 had set records with an average nightly occupancy of 80 percent. But according to Kavin Schieferdecker, senior vice president of conventions at the Philadelphia Convention and Visitors Bureau, that figure is now expected to drop to 40 percent this year. (A typical hotel has to be roughly 60 percent occupied for it to even break even.) All told, Schieferdecker expects $250 million in lost spending just this year, thanks to the various cancellations.

Even when the hotels do reopen — and then, much further down the line, even when large gatherings return — there’s likely to still be plenty of financial bruising. Hotels, competing against each other for a smaller pool of guests, will inevitably get sucked into a race to the bottom, slashing rates as low as possible. It may take three or four years for the price of a hotel room to return to its pre-COVID level.

That is, of course, something of a nightmare scenario for Ed Grose. But when he thinks about the future of Philly hotels, he sounds resigned to his fate: “It’ll be a very good time to stay in a Philadelphia hotel.”