7 Historic Philly Cemeteries Where You Can Walk and Headstone-Hunt

Get some fresh air and a dose of the city's rich history at the same time. 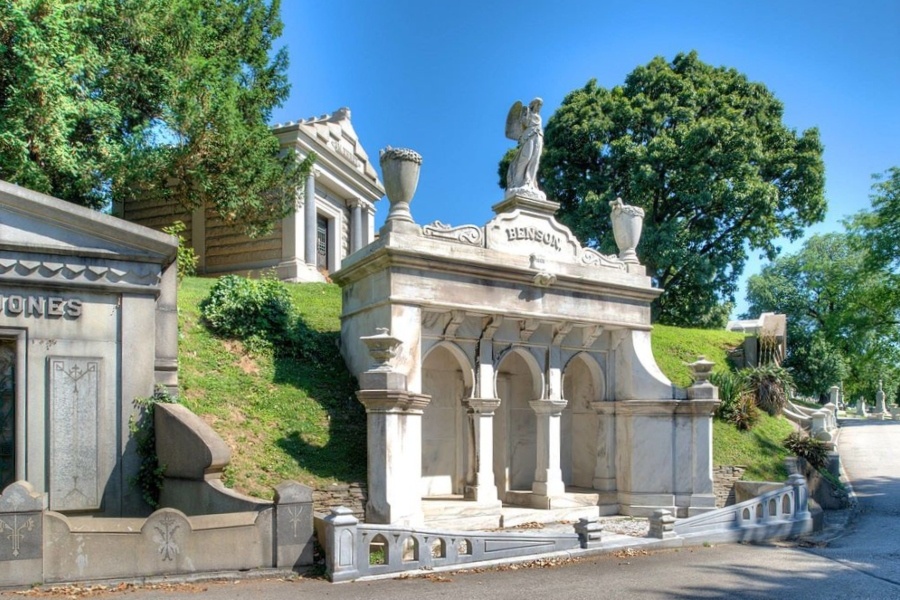 Laurel Hill Cemetery, one of many historic Philadelphia cemeteries | Photo via Creative Commons

Sure, cemeteries haven’t always been regarded as the most uplifting of places. But when getting outside while maintaining social distancing is increasingly challenging, people are turning to them as places of solace and refuge.

As one of the nation’s first population centers, Philadelphia is home to many beautiful and historic graveyards that hold endless stories about the figures who shaped this city — and the world.

Notable people like Benjamin Franklin, Octavius Catto, Marian Anderson and Betsy Ross were buried in Philadelphia. But there are also fascinating lesser-known figures, like Napoleon III’s dentist, the first female journalist to report overseas, the first African-American Olympic Gold medalist and more. Plus, into addition to lending themselves to jaunts through history, burial grounds like The Woodlands in West Philadelphia (included below) offer plenty of green space for recreation, whether visitors chose to stroll, jog, bike, picnic or take tours, while functioning as a natural place for introspection.

Below, five cemeteries in or near the city where you can get some fresh air and search for historic headstones. 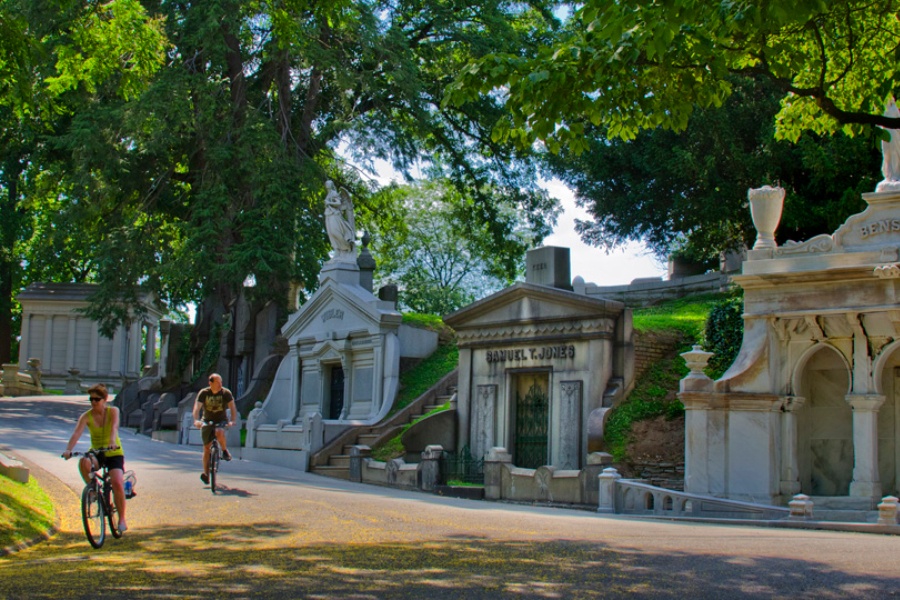 Overlooking the Schuylkill River in East Falls, Laurel Hill is perhaps Philadelphia’s best-known and most iconic burial ground. Dating back to 1836, it’s the nation’s second ever so-called “rural cemetery,” and in 1998, it was designated a National Historic Landmark. Its 74 acres hold more than 33,000 monuments, including obelisks, hillside tombs and mausoleums. There you’ll find the following notable figures:

Laurel Hill’s grounds had remained open during the pandemic as of May 13th. For more information check the cemetery’s website. You can find a map of the grounds right here.

2, 3 and 4. Christ Church, the Betsy Ross House and Gloria Dei

The Christ Church grounds in Old City are closed until further notice due to the COVID-19 pandemic, but if you were inspired to click on this story, you’ll probably want to plan a visit when things are back in swing. We’d be remiss not to include it, because it’s where you’ll find the resting places of Benjamin Franklin (1706-1790) and four other signers of the Declaration of Independence: Joseph Hewes (1730-1779), Francis Hopkinson (1737-1791), George Ross (1730-1779) and Benjamin Rush (1746-1813).

From Christ Church, you can walk to the Betsy Ross House at 239 Arch Street, where you’ll find the grave of the American flag-maker. Like Christ Church, the Betsy Ross House was closed during the pandemic as of May 13th — so bookmark this one for future use, too. (Oh, and an informational tidbit: Ross was originally buried at the also historical Mount Moriah Cemetery in Southwest Philadelphia, a sprawling grounds which fell into disrepair after closing in 2011 but is now being restored by The Friends of Mount Moriah Cemetery.)

About a mile south of Christ Church, you’ll find the nationally registered historic site Gloria Dei Church at 916 S. Swanson Street. Gloria Dei is the resting place of several members of George Washington’s army, as well as naturalist Alexander Wilson (1766-1813) and Early American painter James Peale (1749-1831). Gloria Dei was open to visitors as of May 13th. You can find more information on its website. 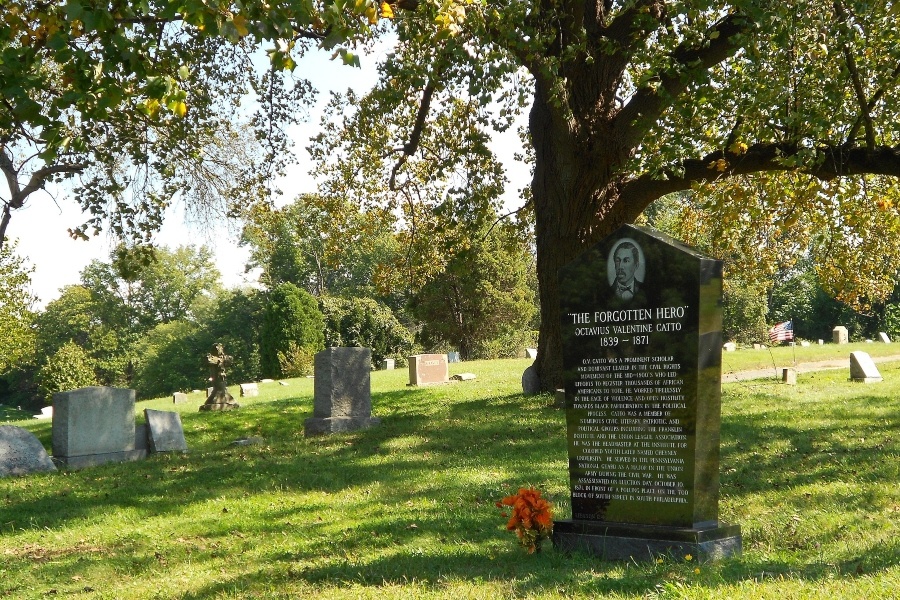 This cemetery just outside Philadelphia in Darby is part of the National Park Service’s Underground Railroad Network to Freedom as well as the Pennsylvania U.S. Colored Troops Hallowed Ground Project — and it’s listed in the National Register of Historic Places. It’s the oldest existing black-owned cemetery in the country.

You’ll notice that many historical figures listed in prominent Philadelphia cemeteries are white. Historically, segregation and racism divided our nation’s cemeteries and ruled over who was buried where. In the early 20th century, Jerome Bacon — an instructor at the Institute for Colored Youth, which later became Cheyney University — and several other notable figures (including lawyer John C. Asbury) fought to establish a cemetery for African Americans whose grave sites were being condemned by the city.

One of those cemeteries was Lebanon Cemetery, one of only two private burial grounds for African Americans in Philadelphia when it was founded in 1849. Lebanon Cemetery, which formerly occupied space near 19th Street and Passyunk Avenue in South Philadelphia, was the subject of massive controversy in the late 1800s when journalists exposed alleged grave robbing there, claiming they had seen people taking bodies from the cemetery to be delivered to medical schools like Jefferson Medical College.

When Lebanon closed in 1902, many bodies were moved from there to Eden, which Asbury and others created to “provide a sanctuary in the Philadelphia area where African Americans could be buried with dignity and respect,” Eden’s website reads. The journey to establishing the cemetery was far from easy, and protests marked its opening and first internment. 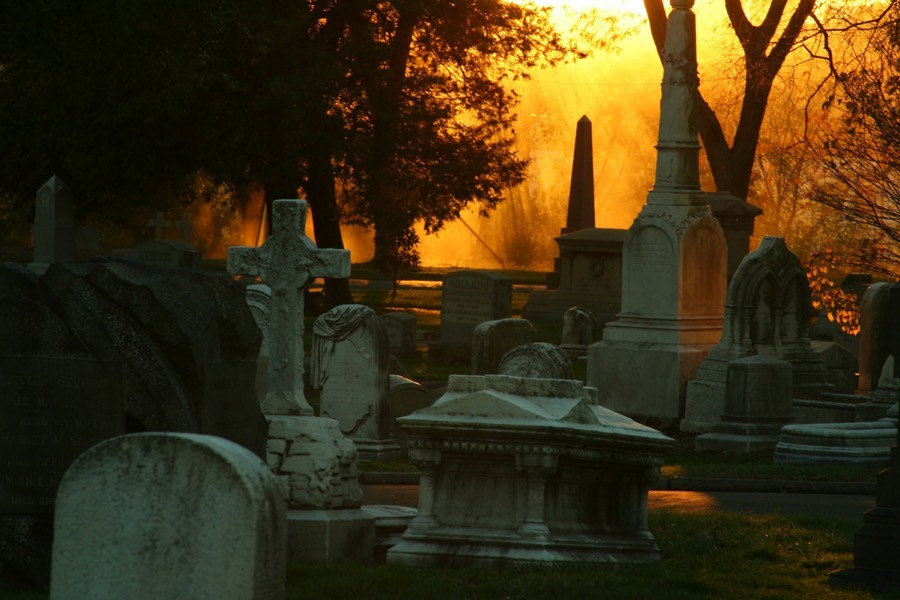 The Woodlands. Photo by Mourningarts via Creative Commons, Link

The Woodlands is an actively used cemetery in West Philadelphia. You’ll frequently find walkers and joggers passing grave sites. The 54-acre site dates back to 1786, when botanist William Hamilton settled in the mansion that still sits on the property. It was designated a National Historic Landmark District in 2006.

Thirty thousand people are buried at the Woodlands, including:

More than 150 years old, Mt. Sinai is one of the oldest existing Jewish cemeteries in Philadelphia. On its 17 acres, you’ll find the resting places of families like the Rosenbachs (including book, manuscript and fine art dealers A.S.W. Rosenbach (1876-1952) and Philip Rosenbach (1863-1953), who used their collection to found The Rosenbach in Rittenhouse), as well as retailing families like the Snellenburgs and the Gimbels and the family of William S. Paley, who helped turn a small radio network into what became CBS television.

In 1982, Frank Furness (who you may remember is buried at Laurel Hill) built a stunning mortuary chapel at Mt. Sinai. It still stands today.