Octavius Catto also fought for voting rights, founded a Black baseball team and more — all before he was murdered on Election Day 1871. 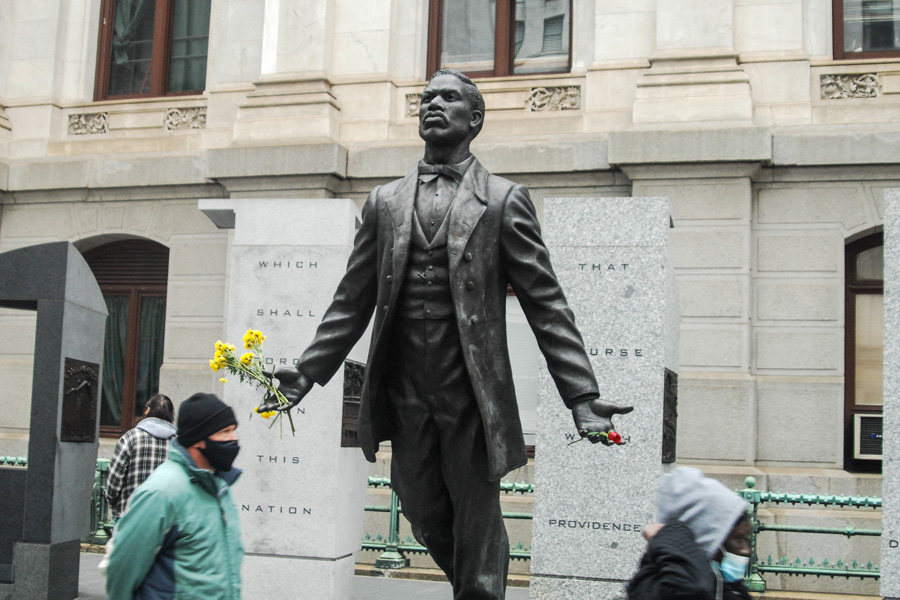 The Octavius Catto monument outside of Philadelphia’s City Hall. Photograph by NurPhoto / Contributor via Getty Images

This coming Monday, February 22nd, will be the 182nd birthday of Octavius Valentine Catto, the Black orator, teacher and ballplayer whose statue was erected by the city in 2017 in honor of his myriad accomplishments. It’s fitting that this Renaissance man was born during what would become Black History Month, recognized nationally by then-President Gerald Ford during the Bicentennial celebration in 1976. Below are just a few highlights from the life of this remarkable adoptive Philadelphian, whom Mayor Jim Kenney has called “the Jackie Robinson and Rosa Parks of his day.”

Octavius Catto was born in 1839 in Charleston, South Carolina, to a free Black woman, Sarah Isabella Cain, and a former enslaved man, William Catto, who had purchased his freedom and become a Presbyterian minister. The Cattos and their four children moved to Baltimore in the late 1840s, with William intending to sail with his family to Liberia and minister there. But the plan went awry when members of the Charleston Presbytery uncovered a letter he’d written that they claimed was intended to “excite discontent and insurrection among the slaves.” With his wife and children, William fled north of the Mason-Dixon line, to Philadelphia.

A City on the Cusp of Change

The great abolitionist Frederick Douglass (1818-’95) once wrote that Philadelphia “holds the destiny of our people.” The city was home to the nation’s largest Black organizations, the African Methodist Episcopal Church and the Grand United Order of Odd Fellows. The AME’s mother church, Bethel, was the target of so much violence that congregants lined its windowsills with paving stones to throw in case of mob attack. Octavius was eventually enrolled in school at the Institute for Colored Youth, which would become Cheyney University, the nation’s oldest Black school of higher education. It was founded by Richard Humphreys, a white Quaker philanthropist who endowed it in his will with $10,000 “to instruct the descendants of the Africa race … to prepare and fit and qualify them to act as teachers.”

Armed with a classical education — he was valedictorian of his class — and a gift for oratory inherited from his father, Octavius Catto became a teacher at ICY as well as an activist. In 1863, he helped raise a troop of 90 Black men to serve as volunteers to protect against a Confederate invasion. In 1864, he became the secretary of the Pennsylvania chapter of the newly formed National Equal Rights League, the nation’s oldest human rights organization, dedicated to advancing the rights of Black Americans. In January 1865, he gave the opening address at the celebration of the second anniversary of the Emancipation Proclamation. He agitated for desegregation of the city’s streetcars — at the time, even Black soldiers in uniform were banned from them — and for passage of the 13th Amendment to the Constitution, outlawing slavery.

Raising Troops for the Union Cause

On April 21, 1865, as the Twenty-Fourth U.S. Colored Troop, which was headed south to help occupy Richmond, Virginia, received its regimental flag, Catto spoke to a vast crowd of Black citizens assembled at the State House (today Independence Hall). After presenting the ceremonial battle flag to the 250 soldiers, dozens of whom he’d taught at the ICY and many of whom he’d helped recruit, Catto said, “De Tocqueville prophesied that if ever America underwent Revolution, it would be brought about by the presence of the Black race, and that it would result from the inequality of their condition.” Lincoln had been assassinated by John Wilkes Booth less than a week before.

In between his other duties and working as a teacher and school administrator, Catto helped found and became a star player for and captain of the Pythian Base Ball Club, a Black entrant to the city’s new most popular sport. (It was supplanting cricket.) The Pythians’ first game, against the Albany Bachelor in 1866, was a 70-15 loss. But it was their only defeat of the season; they ended with “a 9-1 record and the acclaim as the best colored team in the city and perhaps the nation,” according to the 2010 book Tasting Freedom: Octavius Catto and the Battle for Equality in Civil War America, by Daniel R. Biddle and Murray Dubin. The following year, Catto’s team applied for membership in the state chapter of the National Amateur Association of Base Ball Players, hoping to schedule games against white teams. Association leadership blocked the application from coming up for a vote. Catto then drafted a proposal that the Pythians join the national association, rather than the state chapter. Its convention voted overwhelmingly not to admit “colored clubs.” The following year, the Philadelphia Olympics accepted the Pythians’ citywide challenge to white teams, and a match was set. The game lasted three hours, and the Olympics won, 44 to 23. (Pitching must have been interesting.) A story about the game ran on page one of the New York Times.

After Catto paid for a membership in the Franklin Institute — hitherto closed to Black people — the dean of Jefferson Medical College, B. Howard Rand, threatened to cancel a lecture there if Black guests were admitted. The museum board refused to bar Catto. Rand canceled his speech.

The 15th Amendment to the Constitution, barring discrimination against voters because of race, was ratified in 1870. In Philly, the weeks before the mayoral election of 1871, which pitted Republican City Council president William Stokley against Democrat James Biddle, were marked by unrest between Philly’s Black residents and the Irish. On the night before the election, a Black stevedore was shot to death in the street; another Black man, a laborer named Moses Wright, was wounded and died three weeks later. On the morning of Election Day, October 10th, sporadic riots broke out across South Philly. Catto, then age 32, voted, went to the ICY and sent its teachers and students home because of the unrest, warned fellow members of the Fifth Brigade of the Pennsylvania National Guard that they might be called on to quiet the streets, then walked home to get his uniform. Two doors away from his house, he passed a man who then turned and shot him in the back. The bullet went through Catto’s heart. Stokley won the election. A thug named Frank Kelly, an operative for South Philly political boss William McMullen, was tried for Catto’s murder after five years on the lam. He was acquitted in 1877, by what was likely an all-white jury.

In 2017, more than 140 years after Catto’s murder, a memorial to him by California artist Branly Cadet was erected on the southwest apron of City Hall — the first public monument honoring a specific Black person in the city, and the first to be installed since the neighboring statue of John Wanamaker was raised in 1932. It consists of a 10-foot bronze statue of Catto, five pillars representing upturned streetcars, and a ballot box on a table.