Delco police tased a man twice before the video began. Then one cop repeatedly kicked him and hit him with a baton while he was on the ground. But the local police chief says the video doesn't tell the whole story. 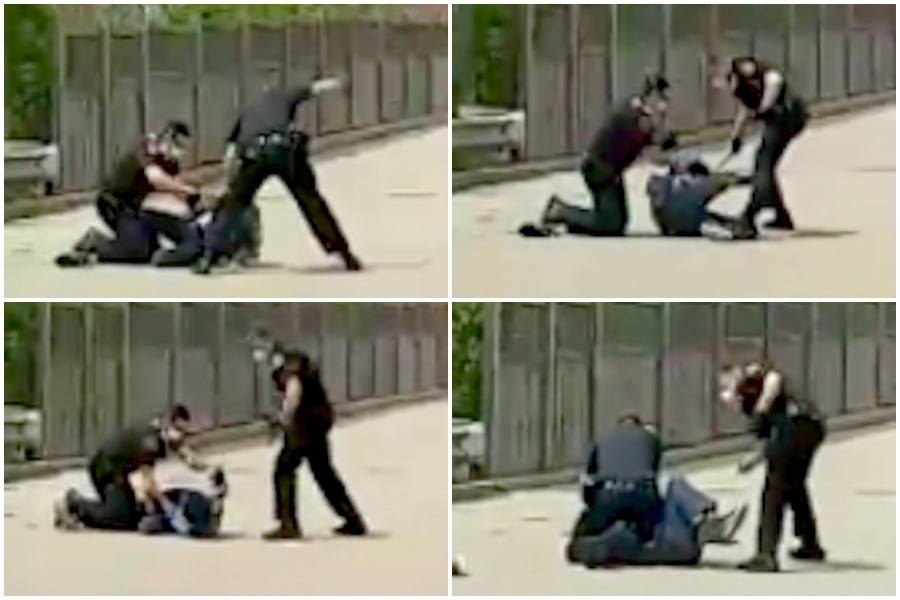 Two unidentified Haverford Township police officers and Christopher Ricciuti in the parking lot of the Kohl’s in Havertown, as seen in a bystander video of the police incident.

There’s a video making the rounds on social media of a confrontation between two Haverford Township police officers and a man in the parking lot of Kohl’s in Havertown.

The incident occurred last Sunday, May 3rd, just before 2 p.m.

Upper Darby resident Andrew Barkowsky had just finished grocery shopping at the Giant supermarket, which is south of Kohl’s on Township Line Road. Barkowsky, a 33-year-old cook at a nearby restaurant, was walking home when he noticed something going down in the Kohl’s parking lot across the street.

“I was on the phone with my girlfriend, and I seen this guy walking and two officers approach him,” Barkowsky recalls. “I really didn’t know what was going on. But I saw them tase him. And as soon as that happened, I started recording. And I crossed through traffic to get a better look.”

“He was screaming for help, saying, ‘They’re not cops!’,” Barkowsky continues. “And the one cop kept telling him to roll over onto his stomach, but the other cop had his knee on his chest. How do you roll over when you have a knee on your chest? You can’t comply with that order.”

Some who have seen the video call it “shocking.”

“We have the full body cams video of everything that happened,” Viola explains to Philly Mag, adding that he cannot release those videos at this time while the Delaware County District Attorney’s office investigates the incident. “This person wasn’t walking. He was running away with one handcuff on.”

Viola claims that what Barkowsky captured on video was the end of a longer interaction that his cops had with Ricciuti.

“When we first found him, he was sleeping in the parking lot and not sure where he was,” Viola says. “Originally, they were trying to give him a ride home. But he was incoherent. They decided to arrest him for public drunkenness. They got one handcuff on him, and then he ran away. He had been tased twice during the course of this run, but it was having no effect. And then they finally tackled him in the driveway.”

We asked Viola about the one cop repeatedly kicking and striking Ricciuti while he was on the ground, simultaneously telling him to get on his stomach even as the other cop appeared to have him pinned on his back with a knee.

“People are saying, ‘Oh my God! They are beating this guy!'” Viola notes. “But in the greater context, this is just the end result of trying to get him under control. All that aside, we reviewed it and turned it over to the DA’s office.”

According to Viola, Ricciuti didn’t suffer any injuries.

“We had the medics there,” Viola says. “But he did not want to go to the hospital.”

Instead of the hospital, Ricciuti was transported to jail. Police charged him with public drunkenness and resisting arrest, among other offenses. He was released from Delaware County Prison on Friday after posting bail.

A spokesperson for the Delaware County District Attorney’s office confirms that the matter remains under investigation. Viola says the two cops seen in the video are not on any kind of restricted duty.