These Philly Sports Stars Are Crushing It On TikTok

But where are you, Joel Embiid? 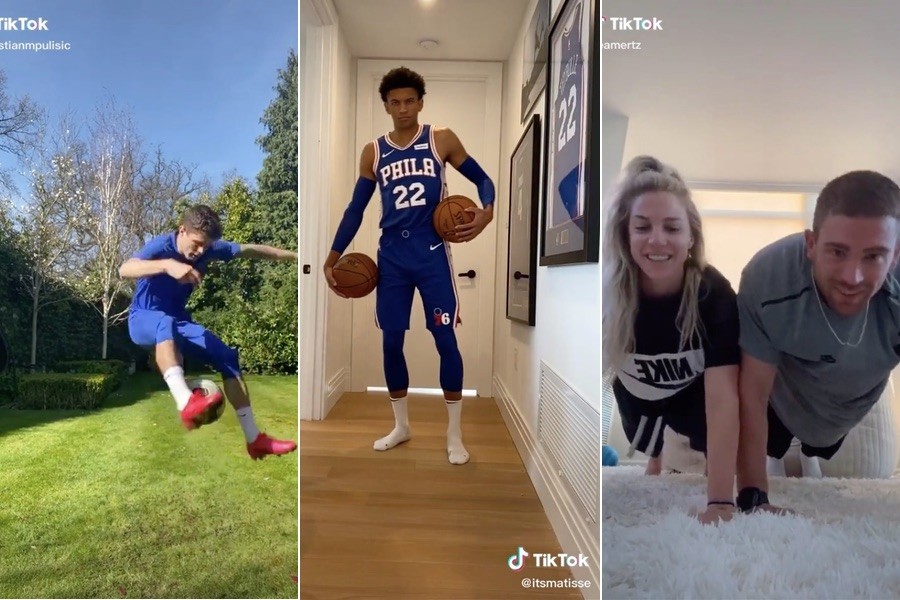 With no sports to play, some Philly athletes have turned their eyes to a new prize: conquering TikTok. Screenshots via TikTok.

One of the extremely trivial but also kind of sad things about our present moment is that there are no sports. This is a problem if you are someone, like myself, who is genetically predisposed to lazily sitting on the couch at the end of the work day (although now I also find myself lazily sitting on the couch during the work day) in search of something to mindlessly absorb through the TV screen. Usually this something is sports. I would watch basketball, football, fútbol, tennis, hockey, cycling, auto racing, golf. (Anything but baseball!) The nice thing about sports is that they are, or rather were, always there.

Lately, I have still been sitting lazily on the couch after a work day, but there has been a gaping abyss before me: What to watch? The NBA’s reruns of classic games provided a few days of entertainment, thanks to Allen Iverson. I started watching the third season of British reality show Love Island. That was good, and kind of like sports in that it featured a lot of very aesthetically pleasing people competing for everlasting glory (or, in this case, “love,” and more importantly, a check for 50,000 British Pounds), but now I’ve finished it. Back to the abyss.

The question I had was, Now that these athletes weren’t out performing feats of athleticism all the time, what were they doing? It turns out, during quarantine, some of them have turned to TikTok. (Others, inexplicably, have used their newly vacant calendar to spend time with their family, rather than posting online.)

Despite the fact that TikTok has been downloaded some 1.5 billion times worldwide and is one of the most popular social media platforms in existence, athletes have been slow to adopt it, preferring to stick to Twitter, Instagram, or if they’re really on the vanguard, video game streaming app Twitch. That’s changing rapidly. The notoriously popularity averse Mike Trout, who will stop at nothing to convince everyone he is a Just a Regular Dude, made a TikTok! (True to form, his first-ever post was a video of him walking the dogs.) Increasingly, you can catch LeBron James making cameos on his children’s accounts, managing to combine family time with TikTok — a true visionary.

One of the obvious appeals of the current social media age was that these new technologies would bring sports fans closer to the objects of the adulation than ever before. To some extent, this has happened. Twitter provides snippets of personality in written form. Instagram would seem to be better suited, but the reality is that most athlete Instagram accounts are glossy, overproduced, and covered with the fingerprints of social media managers. The point, it would seem, is to sell things, or to post heavily edited pictures of the athlete wearing expensive clothes. (To be clear, there is nothing wrong with a fit pic, but a person can only stand so many photographs of Ben Simmons, dressed to the nines, mid-strut, with a car in the background.)

Athlete TikTok is not that. It is an unvarnished new frontier yet to be settled by public relations managers. That time will probably come soon enough. But for now, TikTok gives us the chance to do something quite rare: Watch famous athletes act silly, stupid, or just plain normal. Or at least as normal as they can be while cooped up in their beautiful homes. (Ogling these homes is a very enjoyable secondary benefit of athlete TikTok.)

Anyway here are some of the best accounts from Philly athletes.

The Sixers rookie guard is the undisputed king of Philly Sports TikTok for obvious reasons:

This is the perfect TikTok. It is moderately funny, it showcases some relevant sporting talent, it doubles as a tour of Thybulle’s apartment, and it gives us a glimpse into the absurd comforts of an NBA player’s life: The team apparently fills up the trunk of his car with quarantine supplies so that he doesn’t have to go buy toilet paper himself. What a life.

As the headline from this Philly Mag story about U.S. Women’s National Team star Julie Johnston Ertz and Eagles tight end Zach Ertz says, these two are “ridiculously cute.” Their new TikTok account would seem to confirm this. If you are lonely, single, or not in a flawless relationship, do yourself a favor and avert your eyes.

Also, apparently the Eagles do not buy their players groceries, unlike the Sixers. Sorry, Zach.

@teamertzReady to get some grocery’s. No football has been tough on the kid. Stay safe!♬ 300 Violin Orchestra – Jorge Quintero

Pulisic plays professional soccer for the Premier League club Chelsea in England. But he is from Hershey, PA! Therefore, he is one of ours.

Look how good he is at soccer! Basement furnishings, however, leave something to be desired. We’ll give the kid a break, though. He’s only 21.

As best I can tell, there are no Flyers players on TikTok. That is lame and unacceptable. Fortunately, Gritty more than makes up for the entire roster’s collective lack of spirit.

At 33 and 32 years of age, respectively, Andrew McCutchen and Alejandro Bedoya are not exactly in the TikTok age demographic. So they are forgiven for not actually being on TikTok.

With that said, the Phillies outfielder and the Union midfielder are on Instagram. And while they are missing the background music that is an essential part of the TikTok genre, they are otherwise behaving just as if they were on the app.

Here’s McCutchen doing an impression of alter-ego Larry McCutcheon, whose existence we owe to Howard Eskin.

Joel Embiid is possibly better at social media than he is at basketball. This is not meant as an insult. He is just very good at social media — starting exceptionally petty Twitter beefs and posting photos like this. He should be on TikTok. He would be good at it. If you agree, please share this article so that he might see what he is missing out on. Thank you.