The Sad, Seemingly Inevitable History of Blaming Pandemics on “Others”

From “the Black Death” to “the Chinese Virus,” an examination of pandemic-shaming with Penn expert David Barnes. 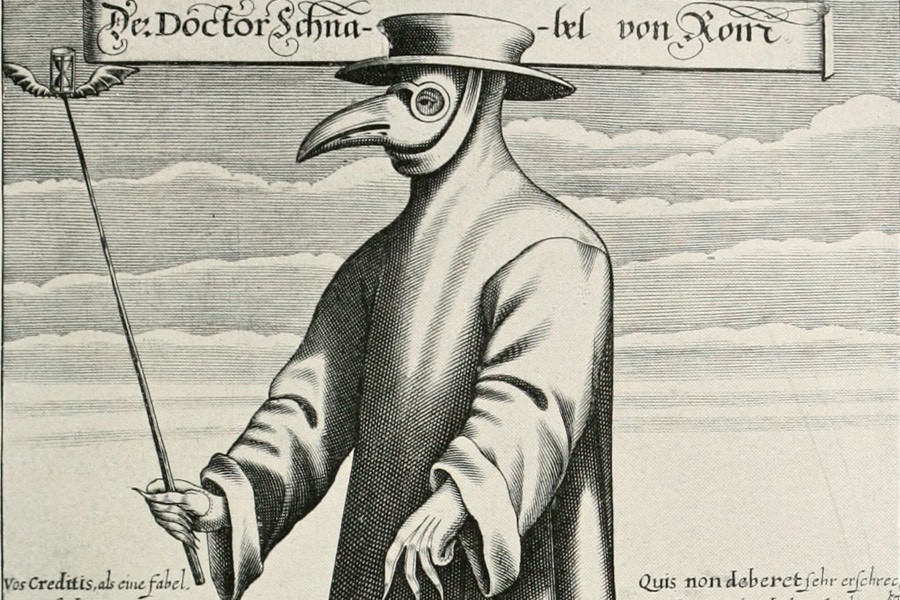 Pandemic-shaming is as old as pandemics. (Copper engraving of a plague doctor in seventeenth-century Rome. Public Domain, Link)

This isn’t David Barnes’s first time at the pandemic rodeo. An associate professor of medicine and public health at Penn, he’s the author of, among other works, a book called The Great Stink of Paris and the Nineteenth-Century Struggle Against Filth and Germs, so he knows from disease. And while you may have been surprised by some of the wild rumors and deep-state rumblings you’ve seen on Fox News or social media, for Barnes, it’s all old hat. As they said in 15th-century Paris, Plus ça change, plus c’est la même chose.

For instance. Have you heard the one about how black people can’t catch COVID-19? Welcome to Philly in the year 1793. A mysterious illness known as “yellow fever” was literally decimating the city — it would eventually kill one out of every 10 citizens. Guess what? Blacks were thought to be immune to it, too, which is why the then-mayor freed blacks from jail so they could tend to white folks in what passed for hospitals back then. In that case, Barnes explains, there was at least a germ of truth to the rumor: “We know that enslaved Africans who were born in West Africa or the West Indies were often exposed to yellow fever as kids. It was pretty common. Those particular Africans were then immune when they came to Philadelphia, so whites did see Africans who were immune. But lots of free blacks hadn’t been exposed and were just as vulnerable.” In the current epidemic, though, “There’s no possible rational explanation like that. It’s clear that COVID-19 doesn’t discriminate. There’s no ethnic or national immunity.”

Barnes has a particular interest in stigmatization and pandemics. “We’ve had a bacteriological revolution in medicine and public health over a short period of time,” he notes. “We know how the mechanics of disease transmission work. Scientists can test substances for the presence of germs.” That, you might think, would dispel rampant ignorance and discrimination. You wish. It was long a staple of TV news to send a reporter out to swab doorknobs, pay phones, subway cars, ATMs — “public places that are just rife with germs,” says Barnes. The reporter would then take the samples to a white-coated scientist in a lab, who analyzed them and revealed: Ewww! The show-and-tell, Barnes says, “ratified people’s prejudices that certain kinds of people, places and substances are foreign and other and dangerous.”

In 2012, in the Journal of Military and Veterans’ Health, medical historian John Frith described a classic example of this “othering” from when syphilis first erupted in Europe in the 15th century:

It sounds comical, doesn’t it? I mention this mutual blame-game to a friend, and she says it reminds her of how we always say the people from the next state over are the worst drivers. (Hello, New Jersey!) But think about what Donald Trump was doing when he repeatedly talked about the “Chinese virus.” “It’s just so blatant,” Barnes says. “It’s not spontaneous. It’s deliberate.” During a recent outbreak of Ebola in West Africa, he mentions, health-care workers made a point of publicly hugging patients they were discharging, to show that those who’d recovered were safe and healthy and shouldn’t be stigmatized. Then-president Barack Obama embraced a nurse who’d survived the disease. “That’s the kind of deliberate gesture that says, ‘I’m not afraid,’” Barnes says. “Trump thinks he’s being reassuring and statesmanlike, but he wouldn’t know statesmanship if it fell on his head.”

Historically, epidemics have lent themselves especially well to association with foreigners and thus stigmatization: “They do come from elsewhere,” Barnes says. “Typically, you hear the news about a disease that’s spreading widely someplace else, and then — it comes here! It’s common sense to conclude that it ‘invaded’ us.” Throughout history, including during multiple rounds of bubonic plague (a.k.a. the Black Death) as far back as the sixth century, Jews were blamed as a source of disease. “They tend to be insular because they’ve been ostracized and persecuted by non-Jews,” Barnes explains. “They keep to themselves. They’re mysterious, exotic. They have murderous rituals, right? They consume the blood of Gentile babies!” But other outcast groups are also what he calls “natural targets” for rumors and accusations: “It’s the most depressing and the least surprising thing about epidemics.”

When Mayor Kenney headed to Chinatown for dinner at the start of this pandemic, he was echoing what then-mayor John Street did in 2003 during the SARS outbreak, when restaurants there were similarly hard-hit. “It’s mind-boggling that people would be so stupid as to believe that people who eat the same kind of food would be spreading the disease,” Barnes notes, “but it’s really predictable.” Asian Americans, he adds, occupy an unusual place in American society; “They’re our ‘model minority,’ right?” Racism against them manifests itself differently, and because they haven’t had “a public, visible presence in speaking out against racism,” they’ve been easier to target. Andrew Yang’s presidential campaign may have helped change that a bit, while in Philly, Helen Gym is fighting the good fight.

There’s a common set of triggers for what Barnes calls a “disease panic” like the one we’re in now: It involves an illness that’s often fatal, that has dramatic and terrifying symptoms, and that’s associated with a faraway place. “Ebola is a classic pandemic-panic disease,” he says, “except that it doesn’t spread quickly or widely. But you can’t beat Central Africa as an exotic place. Plus, they have strange burial rituals and eat ‘disgusting’ species. You see that with COVID-19, too.” You know how Trump kept saying, “But what about the flu? Thousands of people die of flu”? One reason we don’t panic about flu, according to Barnes, is that even though it kills huge numbers of people, “The symptoms are profoundly familiar. It’s not associated with exotic places. And we see it every year.”

Speaking of reassuring public gestures, Princess Diana famously shook the hand of a patient at the opening of Britain’s first AIDS ward in 1987 without wearing gloves — a widely seen rebuke of the notion that the disease could be transmitted via casual contact. Barnes calls the AIDS epidemic “the most obvious example in my lifetime of deep, intense stigma associated with disease. It’s just an amazing historical phenomenon. It was the classic example of stigma distilled to its pure essence.” He struggles to convey to his students today just how much our perception of homosexuality has changed since then: “It had been so deeply marginalized in our culture — and still is in many cultures. The notion that this highly stigmatized identity and set of behaviors was transmitting a disease that at the beginning was believed to be 100 percent fatal — those were the perfect lab conditions for a panic.”

But in that instance, there was a sort of silver lining to the crisis. “AIDS made the gay community publicly visible,” Barnes notes. “Gay activists insisted on being in-your-face aggressive, not polite, and that broke all the rules.” Their activism marked a turning point: “Even people who really feared and hated gays couldn’t ignore them. For the first time, they saw these people as just people, dealing with love and loss and families. That normalized an identity and a community that had been profoundly hidden and abnormalized. When historians write the history of the mainstream acceptance of homosexuality in this country, they’ll say it came when people realized they knew and had always known gay people — that they were a normal, reliable part of their lives.”

Barnes is at work on a book about the Lazaretto, the structure in Tinicum Township that served as a quarantine hospital for immigrants to Philadelphia throughout the 19th century. (The name comes from St. Lazarus, patron saint of lepers — talk about stigmatized.) It’s the oldest such building in the Western Hemisphere — a relic that’s taken on new meaning with this latest pandemic. Barnes is also aiding in the fight to preserve it. “By nature,” he says, “I’m an optimist. An idealist. We can fight back against stupid, irrational reactions. We can show solidarity.” There are occasional precedents, like what happened with AIDS, that give him cause for hope. He also adds one more historical note:

“The so-called ‘Spanish flu’ of 1918-1919 — that had nothing to do with Spain. Spain was a neutral party in World War I, and it didn’t censor its newspapers,” unlike the combatant countries. “So the first accounts of the disease came from there.” The earliest known cases of that flu were actually in Kansas, among civilians and then soldiers who subsequently deployed to Europe.

“What could be more Middle America and white-bread than Kansas?” Barnes asks. “It’s the least likely place to be associated with a pandemic. We should all call it ‘the Kansas flu’ as a blow against the racist associating of disease with exoticized populations.” Duly noted. Even if we’re not in Kansas anymore.